Nokia sold more than 5 million Symbian^3 devices. Total converged devices sales (mainly Symbian-powered smartphones) were up, at 28.3 million, compared with 20.8 million units in Q3 2009 (up 36% YoY) and compared with 26.5 million units in Q3 2010 (up 7%, QoQ). Worldwide smartphone market share was 31%, down 6% sequentially and 9% year on year, due to the overall smartphone market growth, estimated up by a huge 63% YoY. [Post updated with extra charts and quotes]

The financial results just beat market expectations, but overall device sales (123.7 million) were lower than estimated and Nokia issued a lower than expected forecast for Q1 2011 and noted it faced challenges ahead.

"In Q4 we delivered solid performance across all three of our businesses, and generated outstanding cash flow. Additionally, growth trends in the mobile devices market continue to be encouraging. Yet, Nokia faces some significant challenges in our competitiveness and our execution. In short, the industry changed, and now it's time for Nokia to change faster."

Nokia's Q4 results are the first to include Symbian^3 phones. One notable impact is the increase in the average selling price: converged devices' average selling price rose to €156, compared to €136 in Q3. However, with full sales coming on stream only midway through the quarter, their full impact will not be fully felt until 2011. Thus, Q4 2010 sales in converged devices were primarily based on lower cost devices such as the Nokia 5230 and its variants, with sales of Eseries device remaining an important contributory factor.

Looking forward, Nokia now expects a sluggish Q1; it is expecting its Devices and Services margin to be between 7% and 10%, and devices and services net sales of between 6.8 and 7.3 billion Euros. This forecast is lower than market expectations and has contributed to a drop in Nokia's share price (5% down today). Nokia is expected to unveil a revamped strategy at an event in London on February 11th. 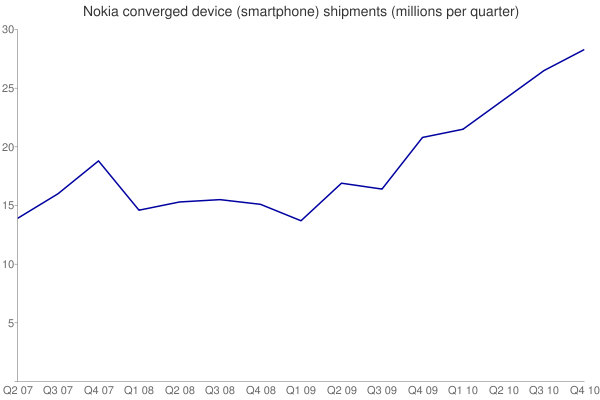 This chart illustrates the market context in terms of sales of smartphones over the last four years: 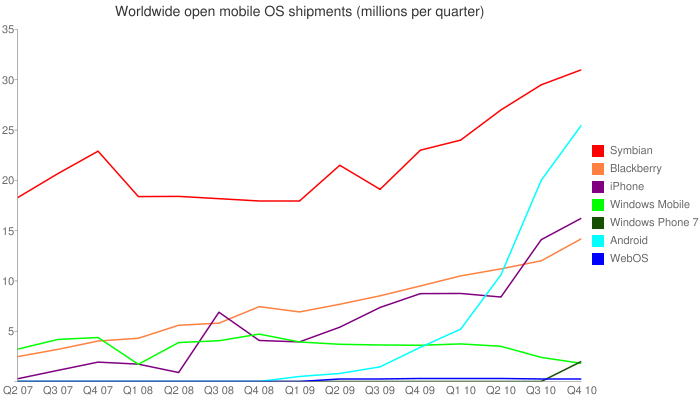