The results are significantly ahead of market expectations, with Nokia's share price up 10% since yesterday.

"We grew our market share in smartphones in the fourth quarter, driven by the successful launch of new touch and QWERTY models. Our performance in smartphones, combined with continuing success in the emerging markets, helped us increase sales in our Devices & Services unit, both quarter-on-quarter and year-on-year. Our solid results also owe a good deal to world class supply chain management and impressive sales execution.

I was also pleased with Nokia Siemens Networks' performance in Q4, especially considering the ongoing challenging conditions in the infrastructure market. That performance enabled it to turn in a full year profit on an operative basis.

Our focus remains firmly on execution, especially around user experience. Here I want to highlight our move to shake up the navigation market with free walk and drive navigation on our smartphones, a good example of how we are leveraging our assets to bring real benefits to consumers." 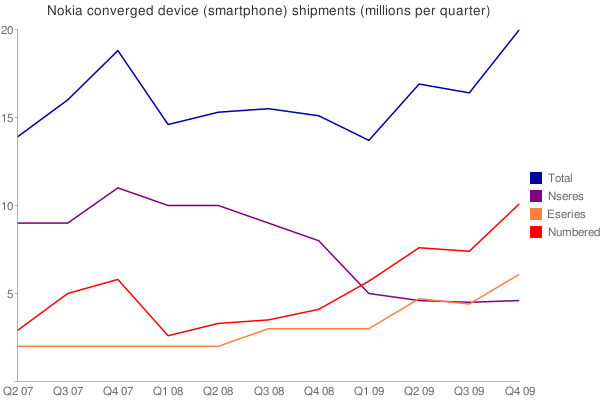 Nokia smartphone shipments over the last two and half years.