Nokia Q2 2010 results - profits down but smartphone sales up

The most obvious numbers in Nokia results is the 31% fall in profits,  €295 million, down from €427 million, and a 40% decrease in EPS (earnings per share). This is primarily due to a fall in profits in Devices and Services, a consequence of decreased margins. Nokia's results were approximately in line with market expectations, with profits slightly lower then expected, but offset by slightly higher sales than expected. In June Nokia lowered its Outlook for Devices and Service in Q2, preparing the market for lower margins and resultant lower profits.

Nokia's smartphone performance at the high end remains poor in the face of competition from Apple, RIM and Android powered devices. However its overall smartphone performance, especially in the mid-tier, remains strong with sales increasing to 24 million, in line with market growth and maintaining Nokia's market share at 41%. Nokia is now looking forward to the release of the N8 and other devices which should improve its competitiveness at the high end of the market.

"Despite facing continuing competitive challenges, we ended the second quarter with several reasons to be optimistic about our future. For one, the global handset market has continued to grow at a healthy pace, led by some of the less mature markets where Nokia is strong. We are also encouraged by the solid second quarter performance of our Mobile Phones business, helped by an improving line-up of affordable models.

In smartphones, we continue to renew our portfolio. We believe that the Nokia N8, the first of our Symbian^3 devices, will have a user experience superior to that of any smartphone Nokia has created. The Nokia N8 will be followed soon thereafter by further Symbian^3 smartphones that we are confident will give the platform broader appeal and reach, and kick-start Nokia’s fightback at the higher end of the market."

Nokia confirmed the guidance it gave in June for the outlook for the rest of the year. It expects overall mobile device volumes to be up 10% in 2010 from 2009 and that its market share will remain flat. Nokia expects the operating margin in Devices and Services to be between 7% and 10% in Q3 and 10-11% in 2010 as a whole (suggesting it expects a more positive Q4 2010).

These margins are lower than was predicted at the start of the year, reflecting Nokia's poor performance in high end devices. High-end device have the largest margins and Nokia is currently facing fierce competition from iOS, Blackberry OS and Android powered devices. The situation is expected to improve as the N8, other Symbian^3 devices and the first MeeGo device become available. However they are unlikely to have a significant impact before Q4 2010 and their full effect may not be felt until Q1 2011. As such Nokia Q3 results are unlikely to see any major changes from Q2. 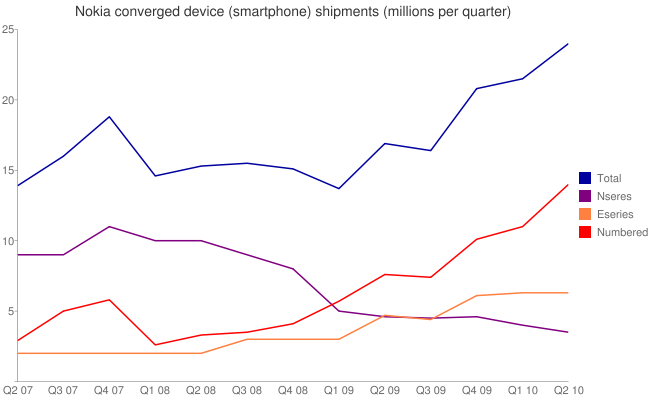 The numbers for Nseries, Eseries and 'numbered' (which also includes Xseries) devices are estimated for Q1 and Q2 2010.

Notes from the earnings call

Nokia's increased smartphone sales should mean that Q2 2010 is the first quarter in which more than 25 million Symbian were shipped (estimate: 26.5 million). Here is a chart illustrating the sales of smartphone by platform over the last three years. 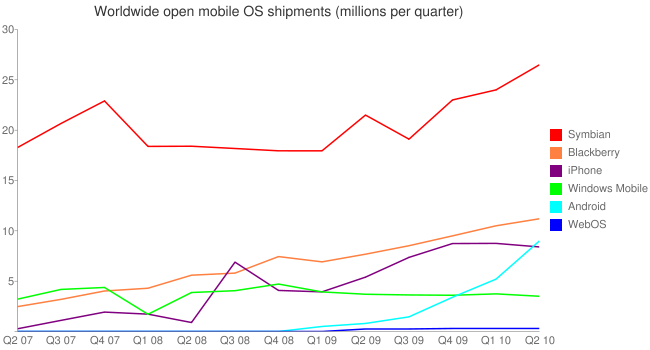