Nokia, with its Q3 results, has beaten market expectations. For example analysts predicted a figure of €0.10 EPS, against a reported figure of €0.14 EPS. Margins in the crucial Devices and Services division were also ahead of expectations and consequently Nokia's share price is trading 7% up.

"In the five weeks since joining Nokia, I have found a company with many great strengths and a history of achievement that is second to none in the industry. And yet our company faces a remarkably disruptive time in the industry, with recent results demonstrating that we must reassess our role in and our approach to this industry.

Some of our most recent product launches illustrate that we have the talent, the capacity to innovate, and the resources necessary to lead through this period of disruption. We will make both the strategic and operational improvements necessary to ensure that we continue to delight our customers and deliver superior financial results to our shareholders."

Looking forward Nokia now expects its market share for 2010 to be slightly down on 2009, but still a healthy 'high thirties' percent. Previously Nokia indicated that its market share would be flat. Nokia is expecting its Devices and Services margin to be between 10% and 12% in Q4 with sales between €8.2 billion and €8.7 billion, somewhat ahead of previous predictions.

Nokia's Q3 results come in advance of the expected positive impact of its new line of Symbian^3 handsets. The strength of sales in converged devices was primarily based on lower cost devices such as the Nokia 5230 and its variants, with sales of Eseries device remaining an important contributory factor. 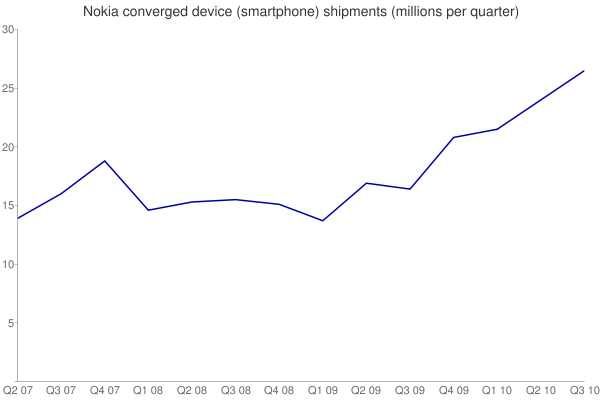 Rafe Blandford, All About Symbian, 21 October 2010