The Nokia E6 and Belle - a step forwards? Or backwards?

The Nokia E6 was always going to be the odd one out of the Symbian^3/Anna stable - just as the E90 was back in the day, by virtue of having a different form factor and different screen resolution to all its sister devices. Moreover, the screen wasn't just different - it was physically much smaller, presenting Nokia/Symbian/Accenture with a unique challenge in how to implement the next big OS update - Belle. Here are some of the issues involved... for better or worse. 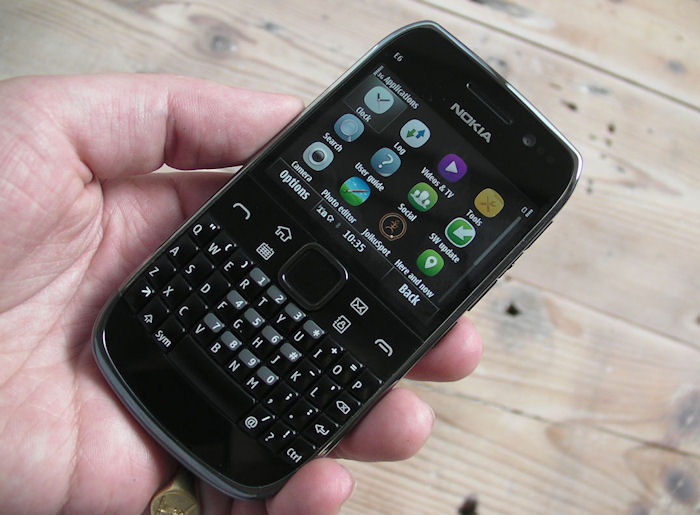 E6 with Anna - Belle awaits, but should I update or not? Read on...

The odd one out

Symbian's standard screen resolution ever since the 5800 launched at the end of 2008 has been nHD, 360 by 640 pixels. We've seen one variation, the E7, with full physical keyboard and operating mainly in landscape mode, 640 by 360 pixels, but this only involved minor changes to the code. The E6's arrival, with higher resolution (640 by 480 pixels) in a much smaller (2.4") physical screen, presented a real challenge to the programming teams.

For starters, text throughout the interface had to be increased in size, so as to still be readable on the small screen. This then meant that less information could be presented for any given screen in any given application. On the whole, the UI tweakers pulled it off, I think, with most applications working out to be quite useable, or at least good enough considering you then had the benefit of the full always-available qwerty keyboard and killer battery life.

Along the way, we've seen reviews here on the E6's hardware design, its software bundle and its enterprise credentials, plus a look at multimedia and its camera. We've also looked at the challenges of developing games for the Nokia E6 and its VGA screen, along with a breakdown of the various ways in which the difference might be tackled? Finally, I also looked at the top 10 games for the E6.

That's around 16,000 words of editorial on this diminutive device. And it warrants it, for it's a classic smartphone form factor brought more or less up to date under the hood. The E6, like the E71 and E72 before it, is a phone that shouldn't let you down, running for days on a single battery charge.

But along comes Symbian Belle, or Nokia Belle as the marketeers would now have us call it. I've gone over the details of what's new in Belle before, but in super-shortened summary:

Plus a lot more under the hood, in terms of (video) codecs and libraries and so on. On the face of it, what's not to like? It's been somewhat frustrating seeing every other E6 product code except mine (SIM-free, UK country variant) receive the Belle update via Nokia Suite.

Yet at the same time, I'm seeing a veritable tide of unhappy E6 owners who have been able to upgrade to Belle, complaining about a barrage of issues and, in some cases, demanding to be downgraded to Symbian Anna (something which isn't possible by end users).

Hopefully it will be instructive for all concerned for me to take the reported issues and classify them appropriately. Note that I'm not being a Nokia apologist here, there are clearly things for Nokia/Accenture to fix or add in future 'SW_updates'. But at the same time there's also a little exaggeration going on and I do think a bit of perspective is required.

In no particular order:

No character counter displayed when composing a SMS

[Common to the E7 as well] A blatant oversight/bug and one which will have to wait for an over-the-air patch to be released. [Update: now released for the E6!] 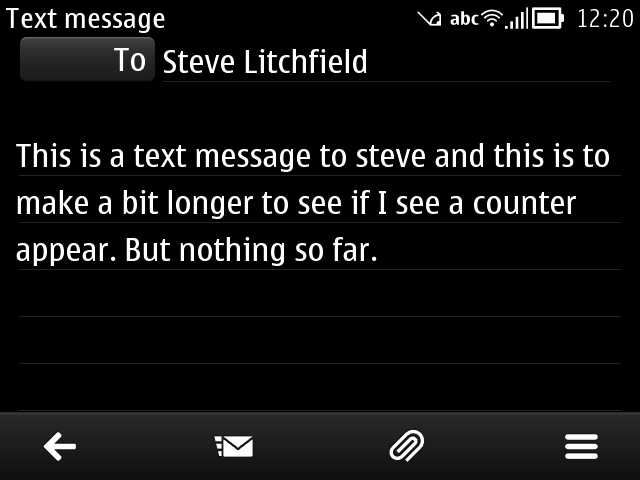 [Common to all other Belle-equipped devices] I notified Nokia about this (videos of over a certain bitrate crash the Adobe Flash Player engine) a few weeks ago and a fix is currently being approved, for release (hopefully) through SW_update.

No email notifications via the status pane, lock screen or the breathing light

[Common to all other Belle-equipped devices] This is trickier for Nokia to fix because of the way Nokia Email isn't fully integrated into the OS. But it needs doing, possibly for Belle PR 1.1

Wi-fi drops out from time to time

[Common to all Symbian^3 and upwards devices, to varying extents] This is a longstanding instability in Symbian's Wi-fi stack, I've seen symptoms of this on all Symbian^3 phones, though curiously many routers are fine and the problems only manifest on other makes. Nokia definitely needs to knock this bug on the head quickly though - it's been a showstopper for me on the E7 ever since launch and Belle hasn't addressed it, though it's thankfully rare on my E6.

No date on the status bar

Regular readers will remember that the E72, running S60 3rd Edition, had the date in the top status bar and the time in the bottom Options bar, but since then we've just had the time, in various forms. However, since the E6 appeared, we still have the time in the toolbar or status bar in most applications, plus three 'Clock' widgets, on all three of which either the date or at least the day number is displayed. 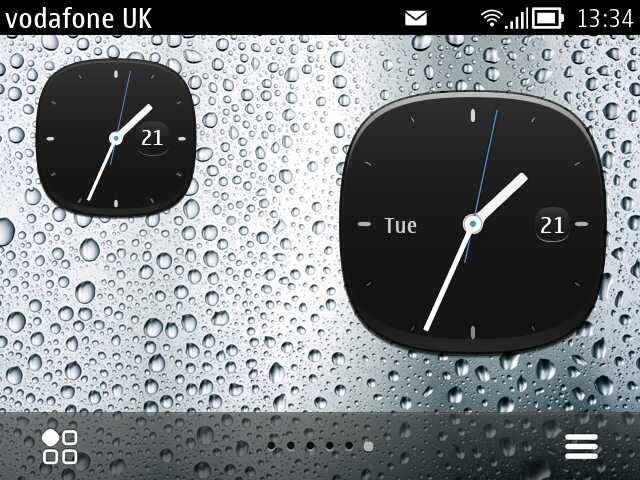 This one's somewhat contentious. I knew that the status bar in Belle was slimmer than that in Anna and so assumed that we'd all have more usable screen real estate. It is slimmer, but unfortunately the bottom of screen toolbar grew (for the E6) more than the status bar shrank! Presumably to make it easier for fingers to hit icons on the small E6 screen. Ah well, it was a nice hope while it lasted!

In practice, as shown in the composite below (Belle on the left, Anna on the right), although there's slightly less vertical space available, the number of (in this case email) list items isn't that different in practice and I wouldn't lose sleep over a few pixels. 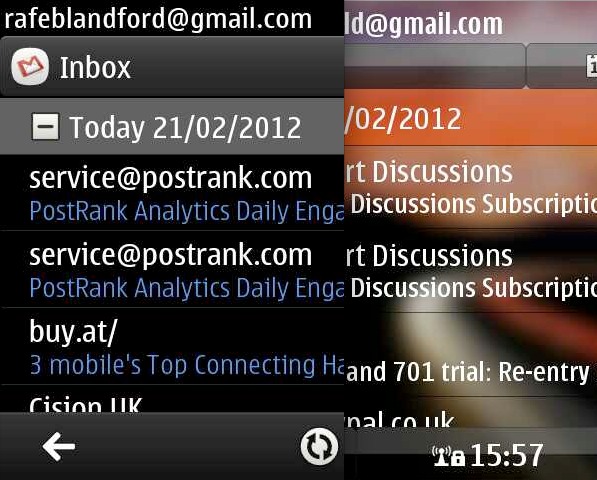 No d-pad support on the homescreen

As an essentially one-handed device, it's somewhat awkward having a touch-centric update land. Certainly the big homescreen refresh for Belle heavily favours the larger-screened devices, where fingers are the default control. Under Anna, the E6's d-pad would move between panels and widgets, with a press 'in' acting the same as a tap. Under Belle, very much aimed at the nHD larger-screened devices, it's finger touch only, sadly. Right and left on the d-pad does move through homescreens, but there's no support for individually nudging a highlight along left and right, up and down, for d-pad selection.

However, elsewhere in the interface, d-pad support is still very much in evidence. For example, being able to bring up the applications menu by pressing the Home key or the apps icon bottom-left on the homescreen, and then using the d-pad to move between (and select) application icons. So it's not all bad news.

Tip: once the application list is up, you don't even need to tap on the magnifying glass icon in order to start searching for a particular app - just start typing the app's name...! 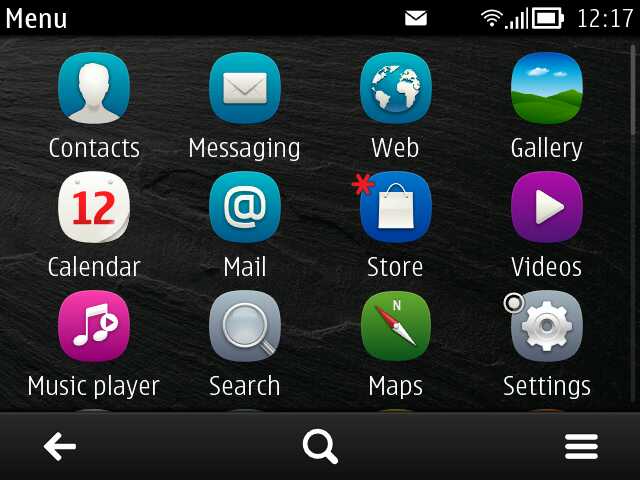 Not having full d-pad support on the E6 homescreen with Belle is a slight inconvenience, but not a showstopper, I believe. After all, more and more of Symbian is now optimised for touch, so we're all holding our portrait qwerty phones in a slightly different way anyway (so that the thumb can roam over the screen if needed).

Widgets under Belle were 'set free' from the fixed 4x1 format used in everything from S60 5th Edition (on the N97) onwards. In some cases (Profiles, Contacts, NFC, etc) this meant smaller widgets, in some cases it meant larger widgets. So we've ended up with over-sized Email, Calendar and Music widgets. Yes, they do more, in terms of displaying information and allowing interaction (e.g. swiping through entries), but their size on the E6 does mean that you can't fit two of the 4x4 widgets on the same homescreen. 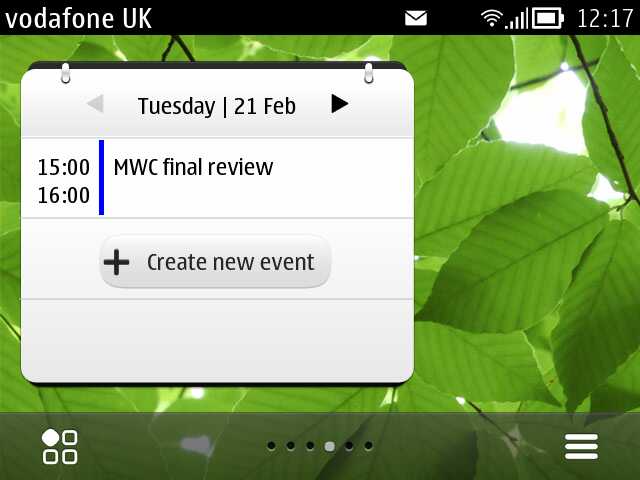 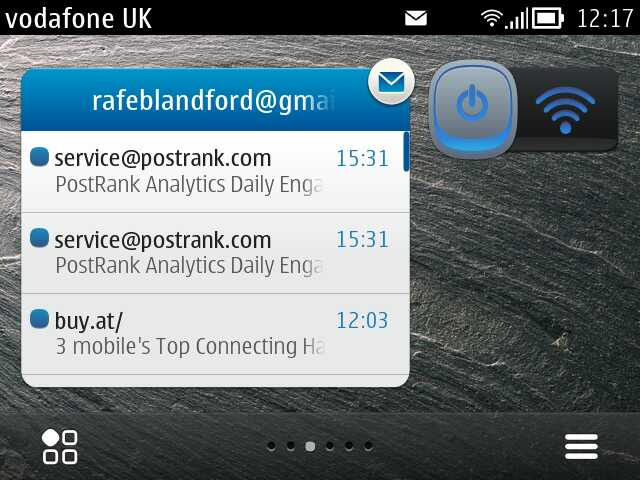 So, for example, you have to have the Calendar widget on a separate homescreen to Email, destroying the 'everything at one glance' capability from the E6 running Anna, with its 4x1 widgets. I can absolutely understand why some users are unhappy about this downgrade in 'glanceability'. There's no easy solution, either - perhaps the email widget could be reduced in size to 4x3 or 4x2 (losing the swipe functionality?), leaving room for a slimmer Calendar widget below? I can see Nokia's problem here - and that of the users complaining - and I sympathise with both!

Along the same lines, if you're set on putting as many application shortcuts on the homescreen as possible (a little strange, since the Apps menu is where you'd typically arrange your most used 20 or so apps) then Belle on the E6 restricts you to 8 shortcuts, rather than the 12 that could be achieved under Anna.

To my eyes, there's quite a bit of wasted space, mind you, I really don't see why Nokia can't adjust the widget grid layout to allow at least another two shortcuts horizontally - so you'd be up to 10 per homescreen. 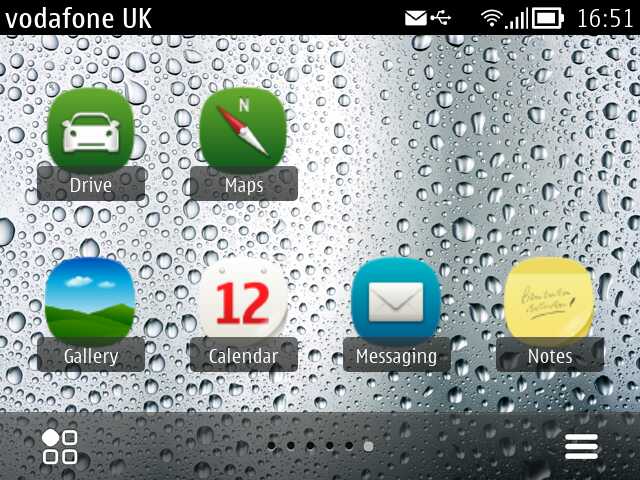 But again, filling homescreens with app shortcuts isn't really using the UI properly. Homescreens should be for your most needed widgets and your handful of most used apps. You then press the apps menu icon to bring up the full list in the normal way. And, again, if this list is too long, then shorten it by moving lesser-used apps into a folder.

One of the usability 'improvements' in Web for Belle is the always-on toolbar - perhaps users weren't savvy enough to know to tap the bottom-right arrow icon in Symbian Anna? The always-on toolbar is OK for nHD screens in portrait mode, it's just about liveable with for nHD in landscape mode (e.g. on the E7 or with the N8 rotated), but it's a right royal pain on the E6, which loses well over 10% of its browsing real estate, compared to Anna.

How could it be fixed in seamless and sensible fashion? Perhaps have an option to go back to Anna's 'full screen' mode, or perhaps to have an option for the toolbar to auto-hide, popping up when you tap the very bottom of the screen? Or even, just for the E6, when you tapped d-pad 'up'? Over to you, Nokia. 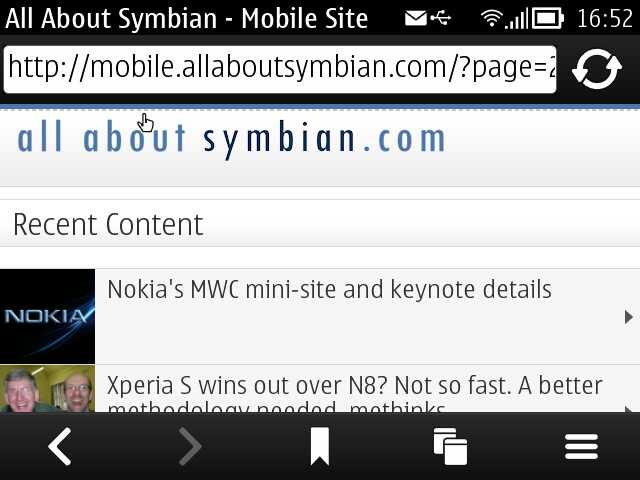 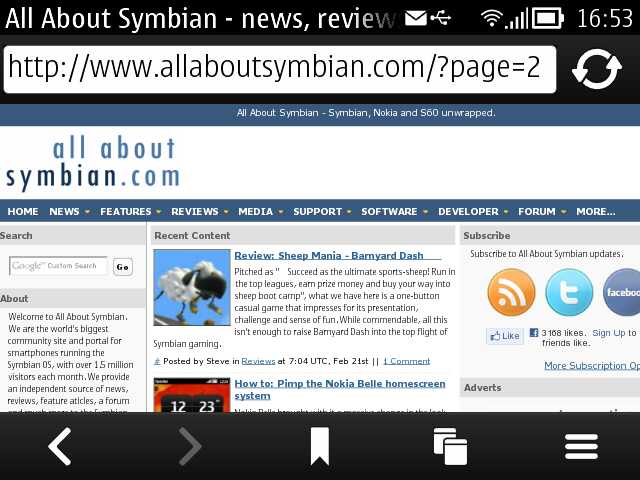 Finally, I've seen reports of the E6 freezing up for 20 seconds at a time, of the 'answer' key not picking up calls, of the phone needing to be restarted between theme changes, and more. Let me say that these don't happen on any virgin Belle E6s that I've seen, which means that it's either buggy behaviour for firmwares for particular product codes or, more likely, user data, settings or applications left over from the previous Anna installation, causing trouble and general incompatibility.

If you suffer from any glitches of this kind, the most foolproof test is to remove your memory card, back up any unsaved content on your mass memory, sync your personal data, and so on, and then: 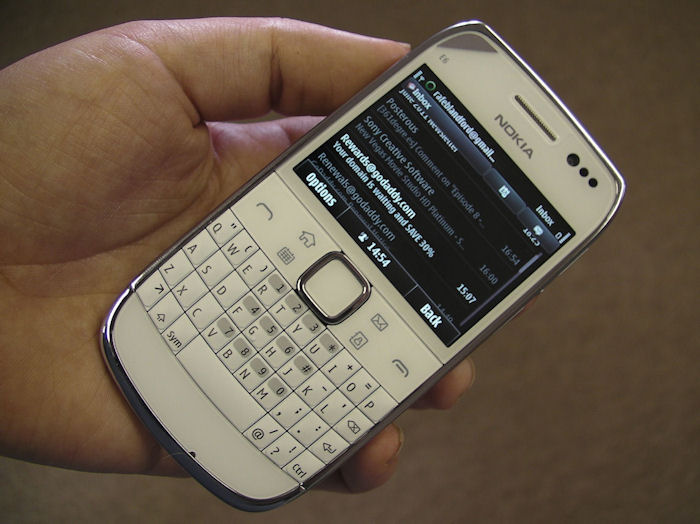 After all of which, I'm still left with a desire for my E6 to be deemed worthy by Nokia of receiving the Belle update. In particular, I want the better RAM management, the baked-in Qt runtimes and the better codecs and player integration.

So I'll update to Belle when I can - and then I'll be bugging Nokia to patch the things above which need fixing. For the E6 and for all the other Belle devices, where appropriate. Despite proclamations of Symbian's doom a year ago, the OS as a whole seems set for other major and minor updates through 2012 - and I just hope the E6 receives a little specialist attention, too!

Filed: Home > Features > The Nokia E6 and Belle - a step forwards? Or backwards?