So yes a bit of an experiment. Writing about the laptop in your pocket ON a laptop in my pocket. In this case the Microsoft Surface Duo 2. No corrections or additions were made on any other device. It has been the dream of every mobile enthusiast for three decades to have a workable laptop, for Office, email, and so on, in a pocketable form. Think Psion, think Nokia Communicators. This is the latest attempt, in 2022! 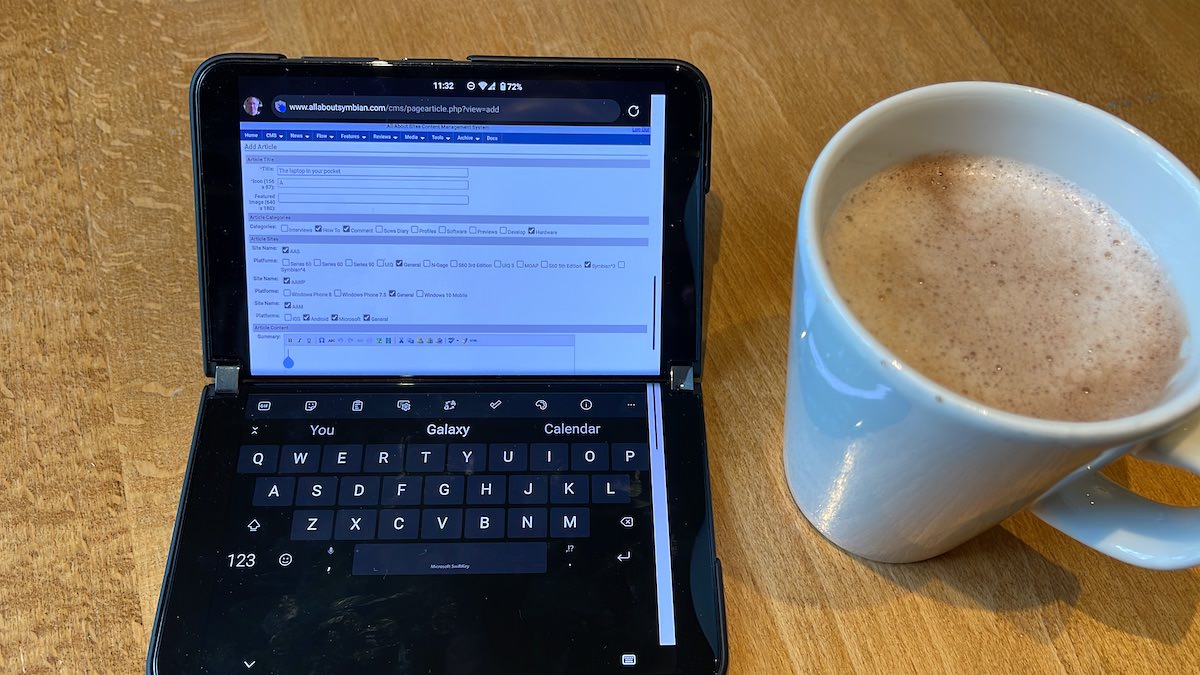 I have to start with typing speed, since the reduced size and glass experience will be the bottleneck for some people. Both factors affect input speed, of course, though I'd estimate that I get about 70% of my normal input speed, using four fingers rather than the usual six or eight. On a full size laptop keyboard I type at about 40 words per minute, allowing for corrections/backspacing as I go along (I'm a stickler for not having to go back to fix things later!)

On the small glass keyboard, it's more like 25 words per minute, again allowing for backspacing and corrections as I go. Which isn't that fast, but it's also not too slow. With no physical key movement though, there's no sense of 'flow', of building up a writing momentum, and for a creative writer like myself this is perhaps the biggest hindrance of all.

However, helping speed is that because this is a keyboard on a mobile OS, I get auto correct of many of the inevitable fat finger typing mistakes, saving me backspacing at all. Plus phrase suggestions in, in this case, the Duo 2's built in SwiftKey keyboard software, with suggestions listed above the keyboard and available at a tap.

25 wpm is in the same region as input speed using a traditional 'slab' phone thumb keyboard, of course, so you could argue that I'm not gaining much here. However, there's the gain in screen real estate, in that you can see far more of what you're typing or have just typed, for context. Plus there's the whole 'feels like a laptop, feels like serious writing' factor. Not least because other people will leave you alone in a coffee shop because they can see you heads down and typing intensely into a computing device (rather than tapping away on a portrait phone). 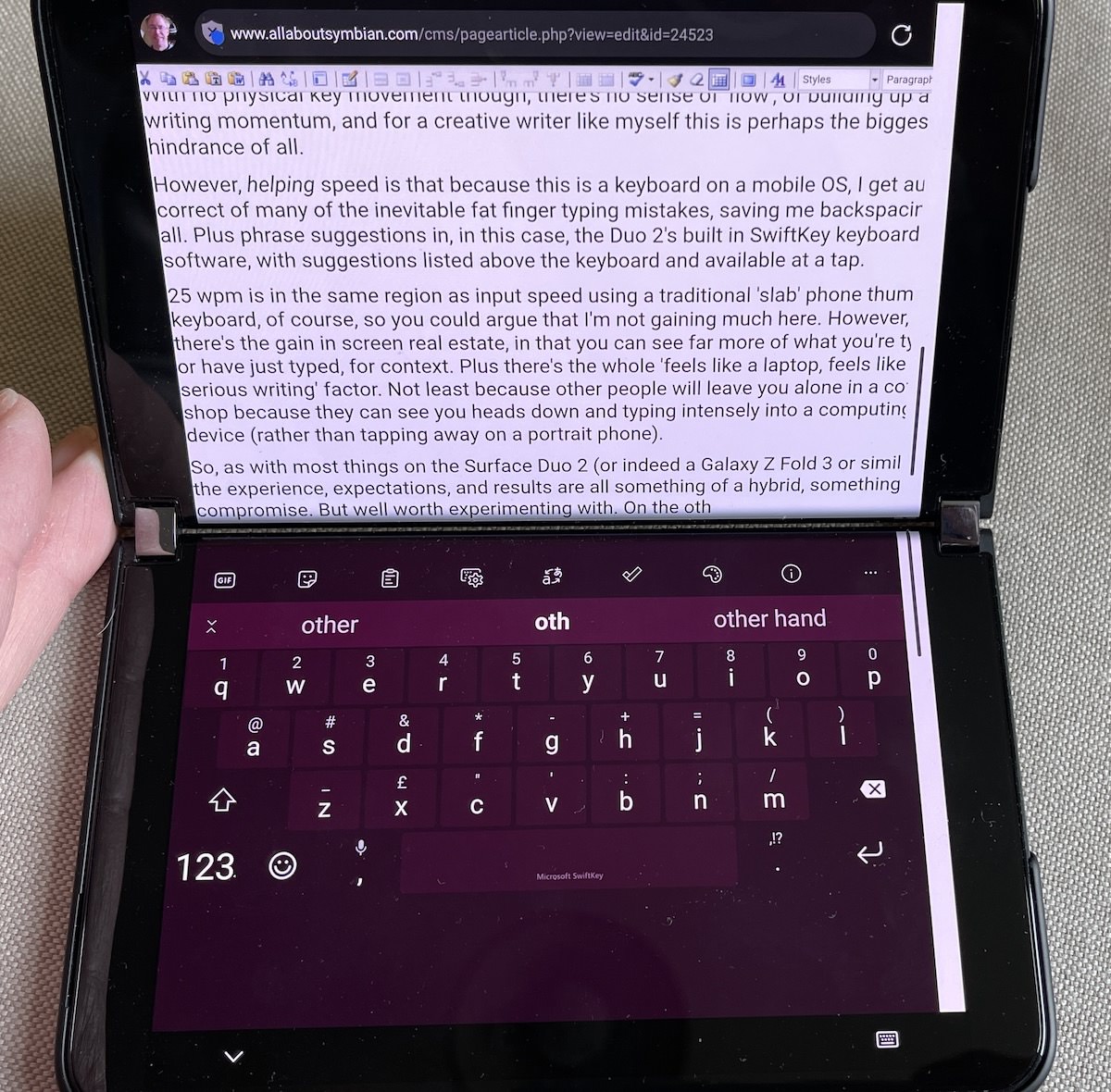 'Heads down' is mitigated slightly by the weight distribution of the Surface Duo 2 and, in particular, its camera bump. The 'flat' side of the device has to be down, of course, to sit flat on the table, meaning that the extra camera weight is in the top half. Now, the hinge is strong enough to allow use at any angle, but at about 135 degrees open (i.e. 45 degrees to the rear horizontal) physics takes over and the device wants to tip back. Which it can't while you're using it as fingers will be bracing it and typing, but it looks a bit silly when you take your hands away and it flops backwards.

In my real world testing, I was happy at about 130 degrees, so about 40 degrees angled backwards from the vertical, in which posture the Duo 2 is very laptop-like and stable.

You'll note from the main photo here that I'm using a different keyboard theme - Microsoft's SwiftKey has dozens of built-in themes, with variations in layout, colours (as here), and symbol displays. I love the rich purple theme, with symbols all shown and available with a long press, so it's easy to insert &*-+= for example.

There's an almost infinite number of things to customise, though with the otherwise stunning 'clover' theme shown below, I had to make do with a rather distracting 'lucky horseshoe' animation when confirming each keypress. Oh well. Something for everyone. SwiftKey, which Microsoft bought six years ago, is supremely capable and there's no real need to switch it out to another Android keyboard. In particular, in one-handed mode, there's 'swype' typing, and in all modes there's a longpress on the space bar to position the cursor by dragging it around your text. 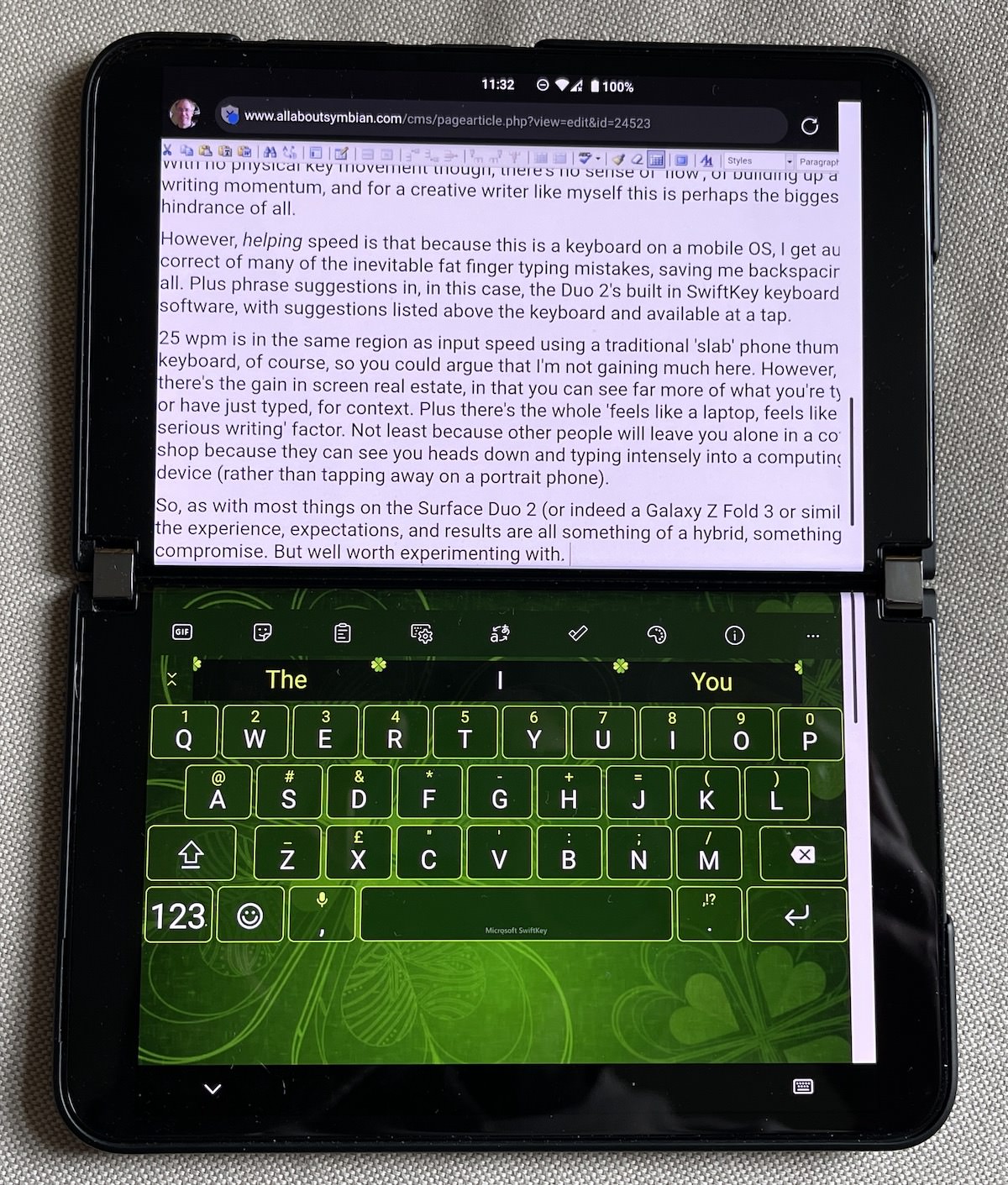 If you let the screens timeout, the capacitive fingerprint sensor is on the top edge and it's easy to authenticate yourself back 'in'. The SwiftKey keyboard will have gone, but the UI will still be the 'right' way round, and a simple tap in your text field will bring the keyboard back, etc.

So, as with most things on the Surface Duo 2 (or indeed a Galaxy Z Fold 3 or similar), the experience, expectations, and results are all something of a hybrid, something of a compromise. But well worth experimenting with - the benefits of having a full (typing) work environment, quite literally, in your pocket are self-evident. And with all the other smartphone office extras present and correct too, from Office itself and Teams (both of which work very well spanned as here, with keyboard) through to social media distractions!

Filed: Home > Features > The laptop in your pocket