Five apps on my smartphone... and I'm still rolling along...

You'll remember that, exactly a year ago, I published a piece here, 'Three apps on my smartphone...', looking at what I reckoned was a common fallacy when looking at smartphone app stores and the numbers quoted? Presenting a 2010 take on the matter, with a slight upgrade from three to (ahem) five, with a semi-serious suggestion for a premium download store or area, and, yes, with an even sharper tone of ridicule at some of the stats and opinions being quoted in the popular press.

Prompting this feature update was news that the Blackberry world is celebrating because their own on-device app store has reached 10,000 items (congrats!) - but that other pundits were still using the word "only" when referring to the information. "But it ONLY has 10,000 apps" was the typical comment, "Android is over 100,000 and iPhone is up to quarter of a million!"

Just stop and think about these numbers. It has been quoted that if you were to buy every commercial app in the iPhone App store it would cost you $144,000. If you were to download and try every app in turn, taking, say, only five minutes per app, it would take you almost three YEARS, day and night.

The Ovi Store currently boasts over 50,000 'items', but that number does include some audio, video and personalisation items, so the number of actual apps (including games) is probably less than 20,000. I guess the pundits would use the word 'only' here too. But 20,000 apps is, I contend, still 19,995 more than most people ever need.

Quoting from my original piece:

The genesis of this piece came from the realisation that modern phone app stores (think Apple App Store, Nokia's Ovi Store, the Android Marketplace, etc) are filled with pap. For every really good piece of software there are nine other 'entries' in the store which are worthless to 99.9% of users. You only have to browse through the store that's relevant to your device to see this effect at work.

But, and this is the 6 million dollar question, is any of this a problem? Leaving aside the issue of users having more problems trying to find good apps in a store that's bloated with rubbish, my postulation is that with the amount of functionality/apps built into each smartphone platform, and with so many useful services running happily in mobile-optimised form in a phone web browser, do people need many third party applications at all?

My theory was that most people would be quite content with just three extra add-on applications - for Symbian OS, at least, in view of the wealth of apps that are built-into most S60 phones now (everything from image editing to podcatching to internet radio to mapping, it's all there out of the box, it seems). Other platforms have different needs and I'd estimate the number of third party apps needed to bring a Windows Mobile, Blackberry, Android or iPhone device up to the same functionality level to be around five or six for most people.

Since writing that, I've upped my 'core third party apps' estimate to five(!), but the argument still holds. Of course, as noted in the original piece, everyone will opt for a slightly different selection of core apps. I did a survey in the original piece, with the top results (each person in this case being allowed three nominations) being:

While there were three apps that were way more popular than any others, there were also around 40 other applications that received nominations, i.e. 40 people each chose a different, specific application as something they couldn't survive without, i.e. it was critical to them. This is typical 'long tail' behaviour and is absolutely to be expected. But 'long tail' applies here to 40 apps, not to a quarter of a million (in the iPhone's case).

My challenge: get a dozen uber, hyper-knowledgable Symbian-using geeks together and get them each to name the (let's go absolutely wild here) fifty apps they each couldn't live without [I'm not sure even I could get to 50, mind you!] There would be some serious overlap and I'd bet that even getting these super-clued up users together and pooling all their ideas wouldn't get you past 100 apps (see the box below). A hundred. Not a thousand, not ten thousand, not 100,000, and certainly not a quarter of a million, the iPhone App Store number often quoted.

A hundred. Rather puts the apparent scorn poured on the likes of the Ovi Stre and Blackberry stores, with 'only' 10,000 or so apps, into perspective, doesn't it?

Looking at my own Symbian powered smartphone, currently the Samsung i8910 HD, I can quickly identify the five apps that my usage depends upon: 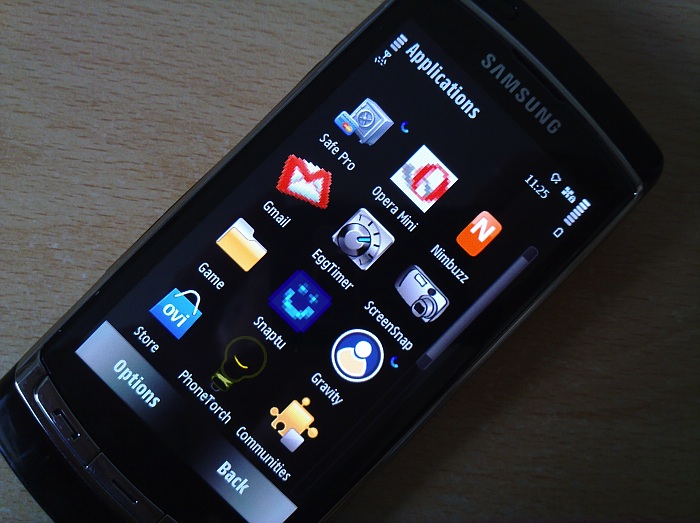 It doesn't take long, trawling through the Ovi Store, to spot the fluff, the rubbish, the novelties, the crippleware, and so on. And yes, this applies to just about every other mobile app store too. But what's the point in obsessing over astronomical headline numbers when the vast majority of normal people just want a vastly smaller, high quality selection available to download/buy? In fact, why not just have a Symbian 'premium quality' app store/portal? You could call it Horizon Ovi Premium Innovator PlayNow "Steve's Choice". In it, you'd find just:

And it's a fair bet that a new user would find this selection more than enough for 99.9% of their daily needs. Job done. Or the guys at the Ovi Store could hire me to go through and rip out (or at least deprecate) the rubbish....

Given that PhoneTorch is built into the i8910's firmware these days, I could honestly say that I could happily survive on just these five and never mind the other 10,000 or so apps in the Ovi Store (or elsewhere around the Symbian world). I'm also counting on the fact that almost all services on the Web (e.g. Facebook) don't actually need their own 'apps' at all these days - there's a bookmark for that, don't you know?

Note that I haven't really talked about games here - a person's preference for games, from none at all to a life-threatening addiction, really is a 'how long is a piece of string' question! Personally, I have just a couple of casual games installed, for odd moments, but I know some people will be somewhat more voracious.

So the next time you read a report proclaiming that mobile OS 'X' is better than mobile OS 'Y' because it has twice the number of fart apps, novelties and jokes applications listed, remember that you can usually knock three zeroes off the numbers being quoted and you'd still have more applications that you actually need. The numbers game is just that - a game.

Steve Litchfield, All About Symbian, 9 September 2010

Filed: Home > Features > Five apps on my smartphone... and I'm still rolling along...