Many moons ago, we all used IRC - and Mobileways WirelessIRC was the mobile client to rule over all others. Now they've turned their eye to Twitter, and their Gravity client could make you cry with delight.

Let me take you to the halls of Austin, and the recent South by Southwest Interactive conference. There are over 8000 delegates here, and each one is carrying a number of 'toys' that go ping. There are new razor thin Dell laptops, tiny Intel powered mobile devices that look like a Psion Revo running Windows XP (the Umid Mbook if you're interested), and me with what appeared to be the only Nokia 5800. 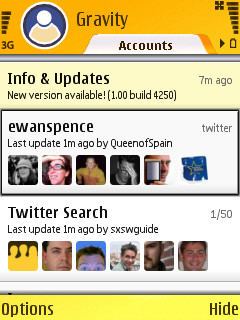 It raised a few eyebrows and a number of people showed an interest in the device – but it was when I showed them Gravity, the latest Twitter client for S60 devices, that their eyes lit up and suddenly they wanted to know everything about the phone and the application.

We're here for Gravity though, and the main selling point of Gravity is one that should never be apparent to the end user – it's programmed in Symbian OS native code. In practice, this means that the developer can create a feature rich, slick and complicated UI and user interface, compared to a J2ME based application. And Gravity has a luscious interface that works equally well on the S60 3rd Edition key-based devices and the S60 5th Edition touchscreen devices.

Let's back up a little bit. Twitter is a service that allows people to post short messages (up to 140 characters) to the Twitter web site. By subscribing to friends accounts, you get a river of updates between you all, conversations start to flow, links and pictures are shared, and private messages can also be exchanged. All of this has grown up around the basic Twitter service, and, while you still have the regular web site to access Twitter (and a mobile site that has not been updated to take account of the growth of the community), the majority of heavy Twitterers will be using a third party application.

We've looked at some of these before on All About Symbian, and, while they've all been an improvement on using the web browser (or sending messages in by SMS), there has always been the idea that a really good application could clean up the Twitter fans on S60.

The short review is simple – Gravity does almost everything you would want a Twitter client to do, and does it well.

If there are missing areas highlighted by user requests, they've been rapidly filled by Mobileways – and as Gravity checks in to see if there is a new update available when it starts (and if so, it gives you the option to download and install it immediately) it's unlikely you'll miss an update to the application. 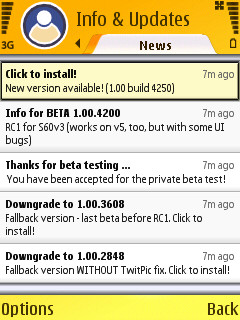 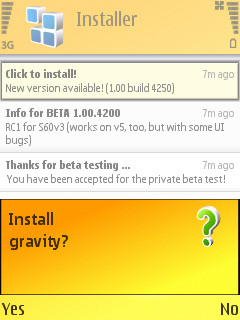 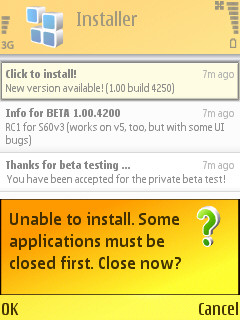 Start up Gravity, and you'll have an opening screen which allows you to manage multiple accounts both on Twitter and Laconica – an open source implementation of Twitter that anyone can run and install. In this way you can have a personal account (@ewanspence) but also work on another account (such as @aas for All About Symbian). Once you set up an account, Gravity will wait for you to confirm going online, useful as all the avatars downloaded could run up your data cost... and even then there's a counter on the screen showing the data used in the current online session.

Having support for multiple accounts on each service is actually somethign that you either think is not needed if you have a single account or online presence, or absolutely vital if you manage yourself, website identities and alternate personal streams, eg for business and personal issues. That Gravity has this rolled in from the start shows a deep understanding of what users of these services actually need. 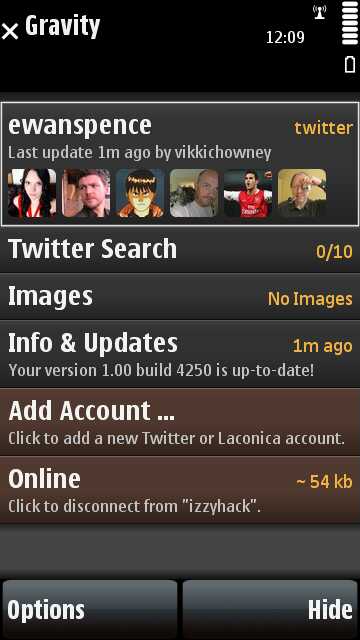 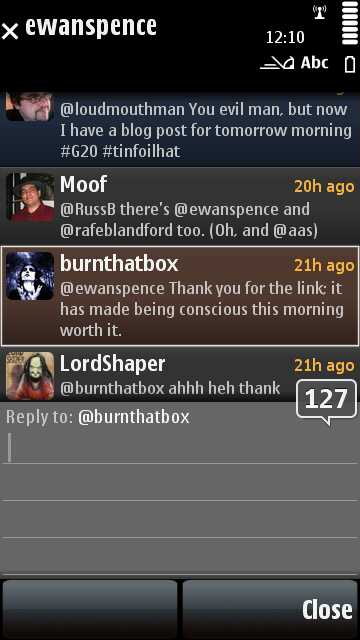 Once online, the fun begins. You get a brief overview of the last few posts of people you follow, as well as a search pane and an images section. The latter integrates with your smartphone's gallery, and any picture taken can be uploaded to the popular third party web site Twitpic (www.twitpic.com) and have a twitter message with a link to the photo embedded. So one click to take a picture, one to upload to Twitpic, and one to post the Twitter message about it. This is simple, well implemented, and something that j2me clients have a lot of trouble with. 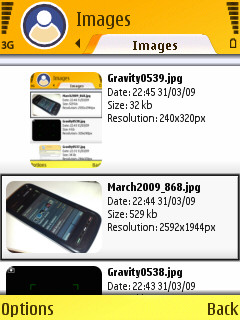 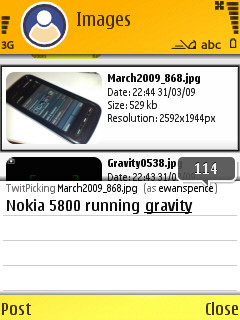 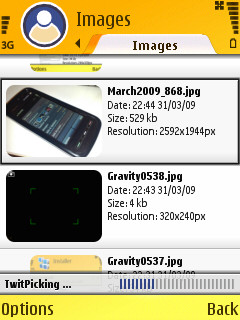 Searching Twitter is also on the front screen, and as well as entering your own search term (which presents the result in the same look as the other screens), Gravity will also present you with a list of the top search terms of the moment – a handy overview of the Twitter world if you want to know what's going on. Because of the real time nature of Twitter (such as during the G20 demonstrations in London) it's possible to see Twitter as an almost 'early warning system' of issues coming up in the world and allowing you to easily follow emerging trends.

Right then, into the meat of the application, the various columns of views of the people you are following. They all work in the same way, with a vertically scrolling ribbon of each twitter post, illustrated by their small avatar. Rolling the cursor up or down moves you through that list, while left and right will change the columns. 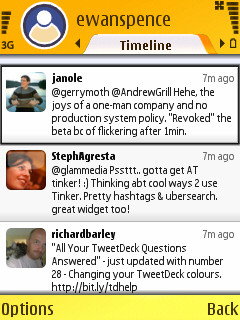 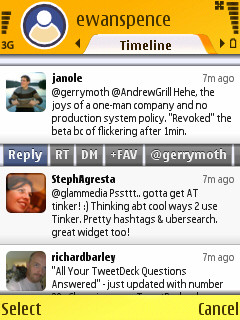 S60 5th Edition phones with touch will find that Gravity is not only fully touch-enabled across the entire interface, but also adds in kinetic scrolling, so that flicking down the long lists carries on and slows after a quick flick, rather than coming to a dead stop after the scrolling move. This is yet another impressive string to Gravity's bow.

It's also nice to note that there are subtle changes in the user interface to accomodate the different sized screens and input mechanisms, notably the menu you can access on each tweet is a small strip on my N95, and a larger button-based approach on the touch screens. 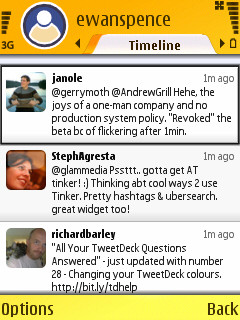 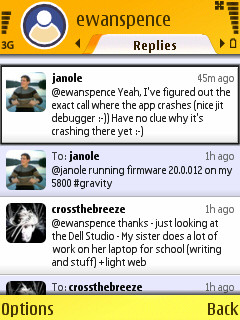 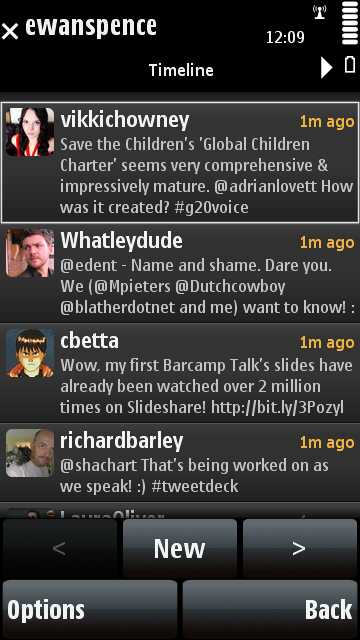 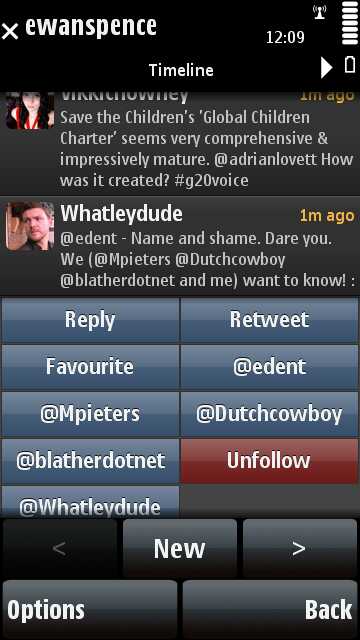 You start on the timeline view, which shows all the people you are following, but it's moving to the other columns that makes Gravity so useful and fast to see what's happening in your personal Twitter community. The next column is Replies and features any Twitter message that carries your name with the @ symbol – the recognised way to nudge someone in a message (so for me that would be any message that included @ewanspence). This is a great way to see who is talking about you, something that the more popular 'microlebrities' need. 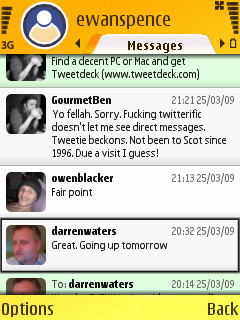 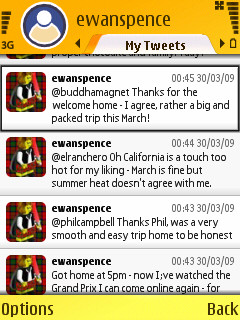 Following those up you have a list of favourite tweets you've previously marked, a list of people you are following, and another list of those following you. It's not always a bi-directional relationship, you see.

No matter the view, clicking on a Twitter message brings up a list of further options that most users will be familiar with, including the ability to direct a reply to someone, auto populating the message box that slides in from the base of the screen (with "@rafeblandford", for example), sets up a private direct message (DM) to someone, or allows you to favourite the tweet for later reference.

Gravity is a pretty much comprehensive tool for almost every Twitter function that is currently in vouge. What's amazing is that the complexity that is present in some of the top desktop tools is present here, in a clear user interface that's totally navigable by the d-pad and action buttons (or touch screen). That's an impressive piece of design. 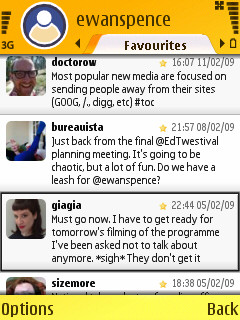 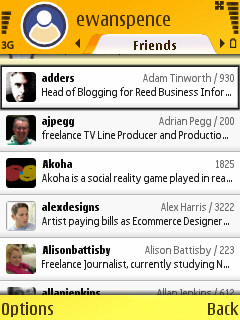 It should also be clear that if you're not a Twitter user, then Gravity might not be the client to get you started on the micro blogging service (but you couldn't go wrong by diving in with it). Also, it has a narrow appeal in the grand scheme of things, even though Twitter is the belle du jour of the internet at the moment.

The client is not without its faults, although I expect these to be addressed if the feedback and adoption of the client is strong. There are no real Settings for the client, such as automatic checks for new Twitters (at the moment you get a manual update menu option and a fixed interval for updates). With such a solid base to build on, will we see features like auto-tweeting of GPS co-ordinates, audible (or vibrating) alarms for incoming direct messages, and other more estoric features? I hope so, even though right now there is still a huge amount of wonderful icing on the cake, there is more that could be done if the community support this app.

The infrastructure of Twitter itself and how long it takes Gravity to make the 'calls' to the Twitter service makes the client feel slow – although I've tested this head to head with Tweetdeck on my PC and the time from opening to all information displayed is broadly similar. It's just that time perception on a mobile handset is far more acute than on a desktop. The UI stays fast and responsive, so the bottleneck is in pulling down the data.

Gravity is an impressive bit of software and is a wonderful advert for Symbian developers. It demos wonderfully to groups of people; the UI is polished, slick and understandable (even though its following very few S60 standards); the registration system is one of the slickest on Symbian we've seen in a very long time; the update system means the many updates that could be seen will be missed by very few people... it all adds up to an applciation that is something special in the Symbian World.

Hopefully Twitter users will register and allow for continued development, but even if it stopped now then it's still one of the most professional apps on S60 in the last few years. I'd argue it's better than most of the desktop Twitter clients as well, and easily an equal of Tweetdeck (the most popular third party Twitter client, after using the native web site).

I've no hesitation in awarding it a score of 90 and an AAS Mega-app award, and urge anyone on Twitter to take a look.