The Top 10 third party applications for the Nokia E6 Communicator

The Nokia E6, ever since its launch in an otherwise nHD-screened world, has been different. Higher (VGA) resolution, smaller physical screen, and landscape not portrait. All of which has meant a few headaches in terms of compatibility with some third party applications. But, once those have been weeded out, which applications do I (and the AAS community) really recommend for the Nokia E6? Apps which work well on the small landscape screen, and/or which work well with the d-pad and full keyboard? Here's my rundown. Oh, and the 'Communicator' in the title? - before you complain, see my postscript! 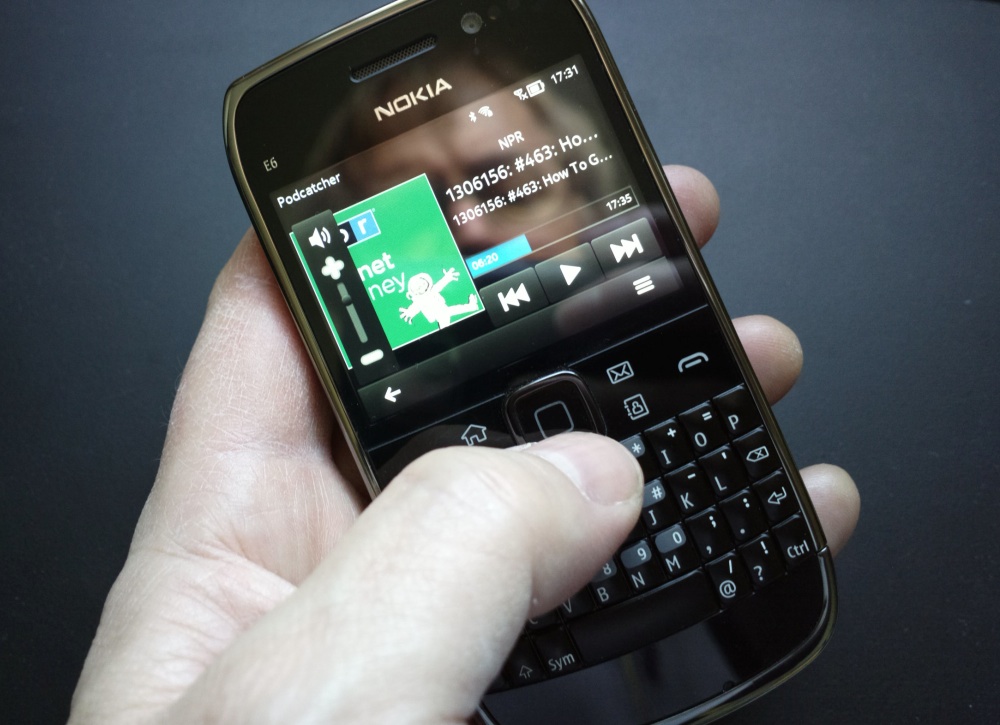 Thanks to others for their suggestions here, by the way, the list here is not just down to my own preferences! Of the thirty or so which were proffered, many didn't work well enough with the d-pad and/or form factor to my satisfaction (e.g. Dropian, FastTube), had become buggy (Quickoffice), or simply didn't work at all anymore (cough: fMobi). But, with the dust settled, here are my top 10 third party apps you can install and enjoy on the Nokia E6.

This popular file manager was recently made freeware and its normal quirk, that of having a very fiddly touch interface, gets reversed here because the strict up/down/left/right file list navigation is a perfect fit for the Nokia E6's d-pad. You only need to touch the screen for the usual options menus plus the occasional context-sensitive action. 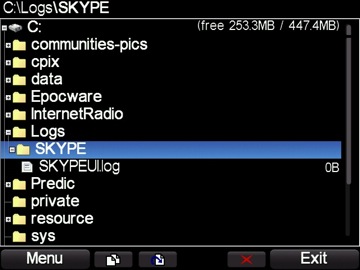 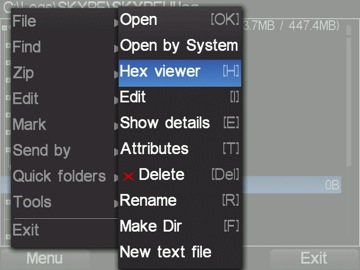 Perhaps Symbian's über-app, the popular combined Twitter/Facebook/YouTube client is also somewhat d-pad-friendly, with nudges switching panes and navigating lists of tweets. It's not perfect, you'll still need to use the touchscreen a lot of the time and there are slight delays when switching from touchscreen to d-pad, but it's workable. Plus Gravity makes it into the top 10 here by virtue of the clever full-screen mode, with auto-hiding toolbars, etc., absolutely essential on the small-screened E6. 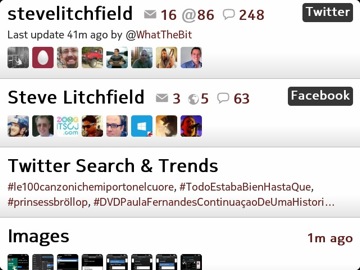 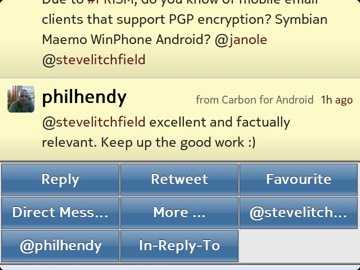 The best (ok, ok, the only) Evernote client for Symbian, this is at least aware of landscape orientations, gets in the top 10 because of its usefulness and because the opening panorama of notes changes from a list to a side by side grid. However, progress within the application is then touch-only, which is a bit of a shame. 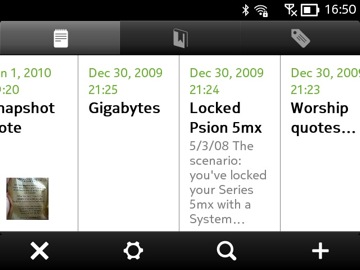 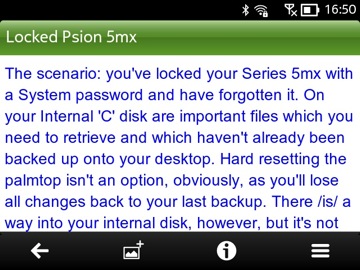 For some obscure reason this doesn't show up for other Symbian phones in the Nokia Store anymore, but it's there and proud of it for the Nokia E6, so featured here. The dialog-based interface is easily navigated with the d-pad, categories are so numerous that the keyboard search really helps, and the limited amount of information needed on-screen is well suited to a 2.4" display. 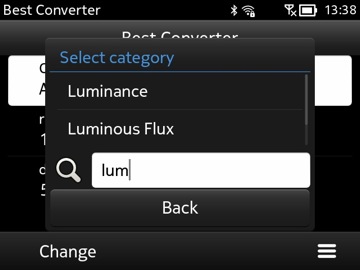 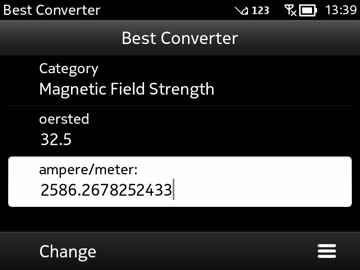 Possibly the clunkiest interface of any app in this roundup, Slick gets its place because, like X-plore above, it has its origins in the days before touchscreens and so is incredibly d-pad friendly. Plus, after writing a message, pressing in the d-pad or pressing the Enter key sends the message - no messing around looking for a 'Send' button or option. A wide variety of chat systems are supported. 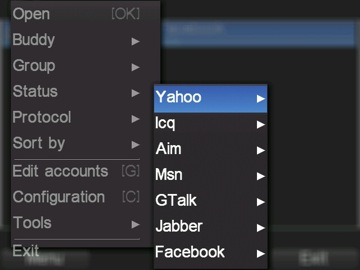 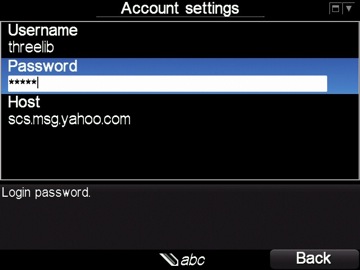 The 'MS Apps' update offered by Nokia for all Symbian phones is a bit of a sluggish and quirky beast, but the OneNote implementation is perhaps the highlight. Syncing directly to your OneNote 'document' in the cloud (in your Microsoft SkyDrive), it's very much an alternative to Notekeeper (above) and it's surprisingly easy to navigate with the E6's d-pad and keyboard, filing away random jottings and even interesting photos, all over the air and immediate. 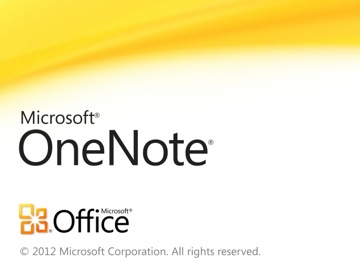 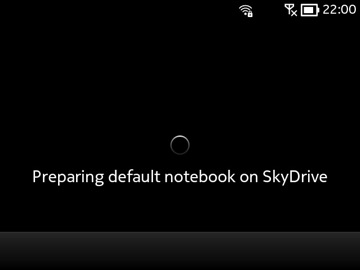 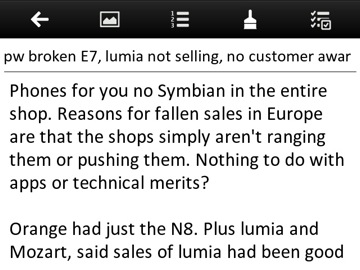 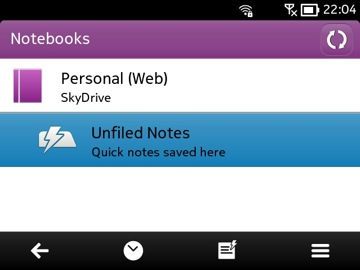 Podcatcher and Poddi are the two great rivals in the podcast world on Symbian, of course. Poddi scores by having proper memory of where you got up to in each podcast in terms of playback, but it's very limited in terms of hardware button support, whereas Podcatcher can be driven almost completely using the d-pad, moving up and down lists, between tabs, pausing, playing and fast forwarding. Terrific stuff - and more impressive when you consider that the developer probably didn't have the E6 (or E7) in mind when he wrote the application, Podcatcher was simply written to handle all device 'events' properly. It's certainly an excellent fit on the E6. 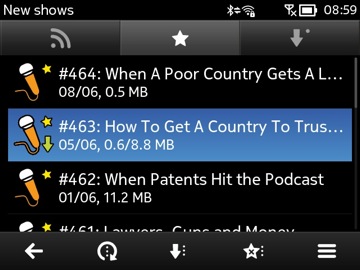 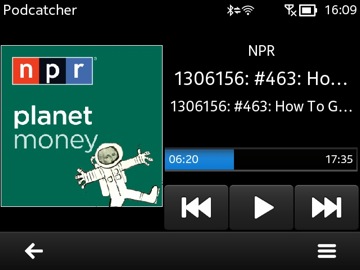 Those Symbian code wizards at Epocware know a thing or two about making their apps conform to the various methods of input and navigation in the Symbian world and it's no surprise that this application works faultlessly with the d-pad. Even the 'Login' panel on the front screen responds to a d-pad press, revealing the password field. You hardly need to touch the screen at all. You'll know the application, of course, it's a secure database, containing all my PINs, passwords, and information, and is syncable between Symbian, Windows and Windows Phone, plus a few others with a little hackery.

The only slight catch is that the Nokia Store doesn't seem to stock it anymore for the E6, so you'll have to buy it from Epocware directly. 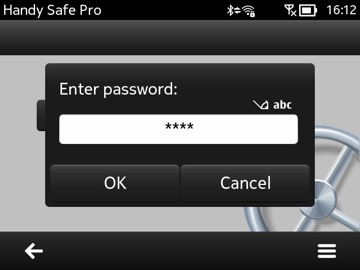 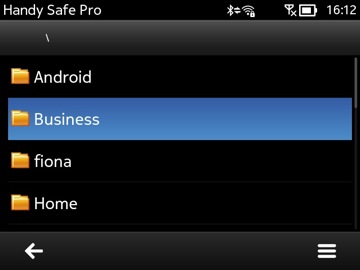 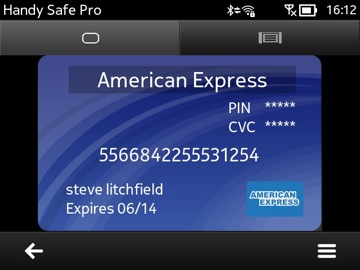 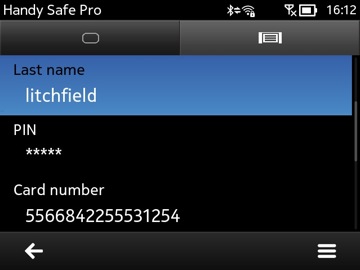 Opera Mini was borne out of the concept of bringing full desktop web sites down to small-screened smartphones, so it's not surprising that it's something of a star here. In addition to the usual proxy-based data compression and low bandwidth usability, you can turn off the 'navigation' bar in its settings, giving full-screen browsing in a way that Symbian Web... doesn't. The d-pad is handled intelligently too, for moving between sections or links and then following them. 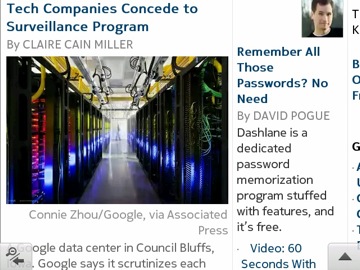 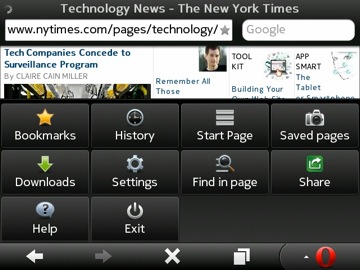 And it's at this point that I'm going to cheat ever so slightly, by referring to a version of the application which isn't actually available yet. Shown here from beta testing and coming soon to the Nokia Store (hopefully) is CuteTube 1.7.4. The popular YouTube client already worked pretty well on the E6, as you might expect from a video-centric application on a phone with landscape aspect ratio screen - yes, playback is a small compromise, in that you have to choose between a letterboxed, squished or zoomed view, but it worked on the whole. There was no d-pad control at all though... until now. The latest beta with full d-pad and keyboard control makes CuteTube a pleasure to use on the E6. Buy it now, if you haven't already, and await the 1.7.4 update eagerly. 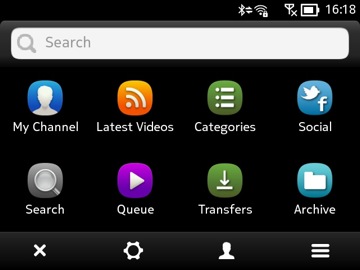 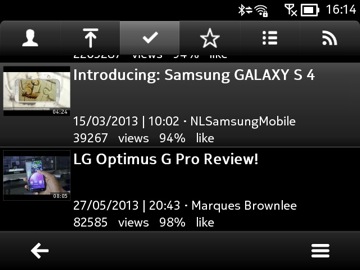 So there we have it, 10 quality applications that you make the most of your Nokia E6. Note also my tutorial on how to speed around the E6 generally in terms of keypresses and shortcuts, my 'Pimping the Nokia E6' feature for a full discussion of what makes the E6 unique, even today in 2013, and my feature on ideas for optimising your E6 homescreens.

Comments welcome, of course, if you have a favourite application for the Nokia E6 that I haven't mentioned and that works stonkingly well on the little Communicator. Talking of which....

Ah yes, just in the same way that the large clamshell Nokia 9210, 9500, E90 and 9300 were 'Communicators' in that they centred on getting things done, communications and organisation, along with very flexible hardware, good build quality and great battery life, and I'd argue that this largely sums up the E6 as well. It doesn't pretend to be a large screened media consumption device (despite my number 1 and 2 apps above!), it gets on with what it was designed for and to hell with current fashions.