In part 1 of this series, Steve Litchfield looked at exposed camera glass on some phone models and investigated whether scratches really make a difference. In part 2, he investigated the pros and cons of LED/dual-LED/Xenon flashes in camera phones - does Xenon or dual LED flash make that much difference? In part 3, he investigated the fabled 'Megapixel myth' with an objective eye. In part 4, he focussed on the difference between good and poor optics (at the same camera resolution) and in part 5, he pitched all the top smartphone cameras head to head, in detail. In part 6, AAS guest writer Dirk Snoyt took up the theme of camera phone flash research and got all technical on the theme of colours... In part 7, I returned with a look at the difference optical zoom makes and ask the question "Is it better to have optical zoom or just much higher resolution?" Part 8 looked at phone camera video capture potential and part 9 looked at video focussing differences in Nokia's Nseries. Part 10 looked at the difference sensor and aperture size can make, for both stills and video.

In this, part 11, Steve looks at a specific positive from the presence of large numbers of megapixels and discovers yet another use for your smartphone.

OK, so I already disproved the 'Megapixel Myth', to whit, for every day photography you really don't need more than about three megapixels - there are more important factors to worry about (see the feature parts above) in terms of achieving better photo quality.

However. One of the advantages of having a phone camera that can shoot, for example, at 8 megapixels (as on the Samsung INNOV8 used for the pictures on this page) is that it's quite practical to shoot a wide scene and then pluck the bit you really wanted out of it, without sacrificing quality too much. So, to take a real world example, here's a 8mp image shot on the INNOV8 in reasonable light (late afternoon in the summer): 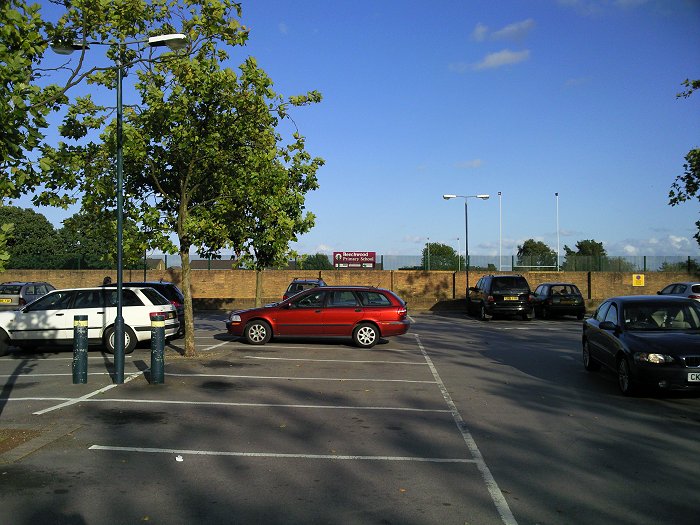 No, obviously, this is a static shot and in real life you'd probably be looking at a large group of people and opting to pick out a smaller group etc. But for some reason people see me coming with a phone camera and run away screaming. So parked cars will have to do for the example. The photo above, at full resolution, is 8 megapixels, i.e. 3264 by 2448 pixels. Impressive. Entirely wasted though if all I wanted was a photo of the car park.

BUT. Let's assume I'd taken this earlier and now decided that it was the red car I was interested in. With megapixels to spare, coming out of my ears, I crop this image down to 2 megapixels, i.e. the same common 1600 by 1200 resolution seen on an awful lot of average camera phones these days. Still a respectable resolution. And here's how the photo now looks: 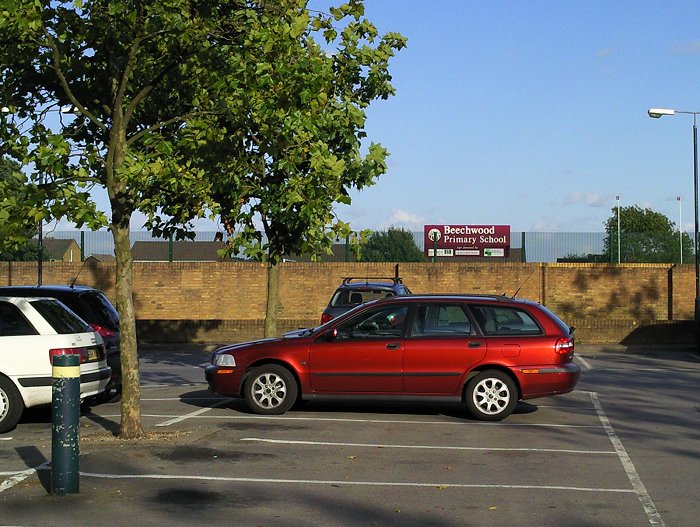 If we had taken the same original photo with a 2 megapixel camera, the cropped image would now look like: 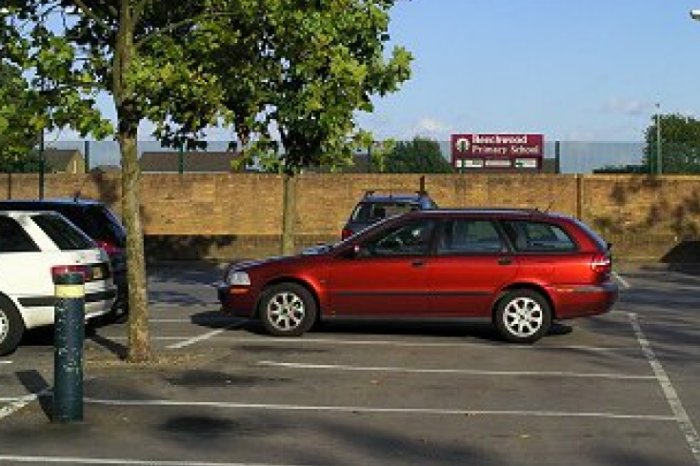 Quite a dramatic difference. And all because I had the spare megapixel capacity. In fact, with even 2 megapixels being more than enough for a decent web image, I can even crop further on my original 8mp to 2mp photo, to get to just the car, at roughly 0.3 megapixels: 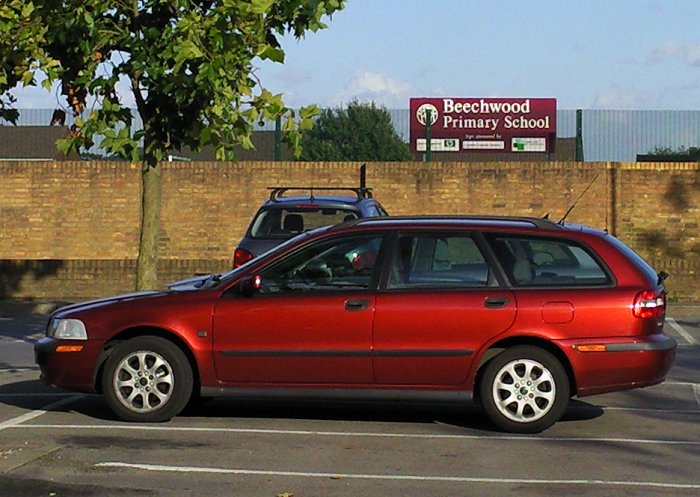 At roughly VGA size, this isn't going to look good enough when printed, but it's crisp and quite good enough for putting up on the Internet or including on a DVD, should that have been my objective. Now go back and compare this close-up of the red car with the original wide shot at 8mp and you can hopefully see the value in having pixels and detail to spare.

I doubt manufacturers have this sort of cropping use in mind when building in very high resolution cameras, but it's certainly a useful trick to know.

You won't have heard of this term before. That's because I just made it up! Above, we looked at cropping a 'normal' photo, in order to see more of the finer detail of part of it. A similar technique can be employed when taking very close-up photos, with a different aim in mind: basic microscopy.

You see, my eyes aren't what they once were (hey, I'm heading towards 50 and they've had a hard life!) and I find it hard to really see the detail on objects. Annoying when it's instructions in tiny print on a packet or when trying to fix a small toy, for example. And then it hit me - almost all of my 5 megapixel and 8 megapixel camera-toting smartphones have far better cameras than I have eyes, so why not use this to my benefit?

So - having trouble reading the ingredient list on a small packet, for example? Simply snap it with your INNOV8 (or similar) and then zoom in a couple of notches to see the microscopic text at huge size! Problem solved: 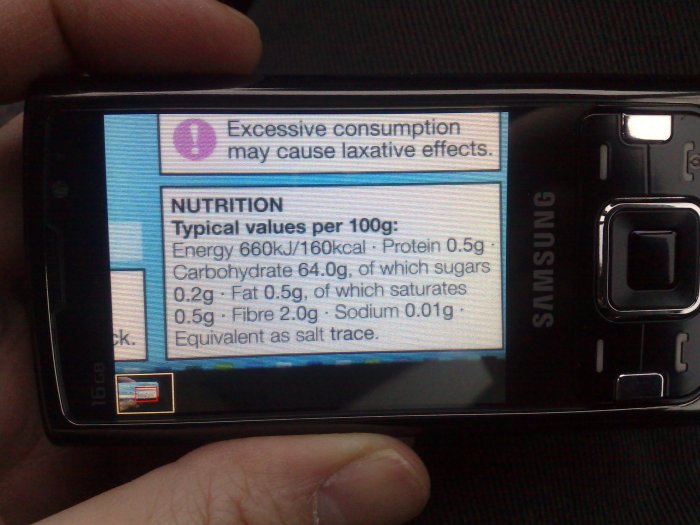 But we can go further. What about using the fantastic 'eyes' in our phone cameras (in 'close-up'/macro mode gives you the best chance of success, and as always try to shoot in the best light you can) to reveal interesting detail in all sorts of everyday objects around us?

Now we're really getting into Megapixel Microscopy! Here are some examples. Guess what each one is before I tell you! 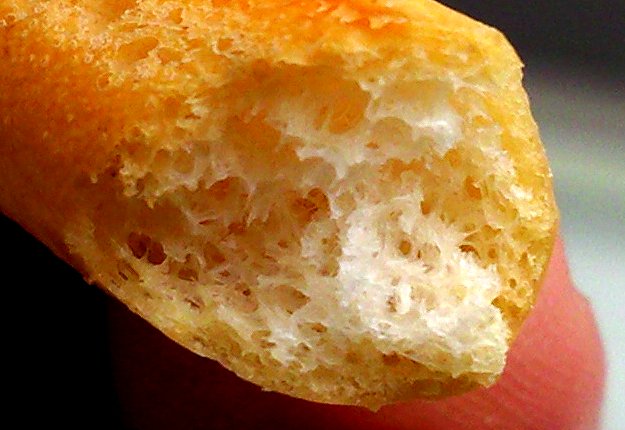 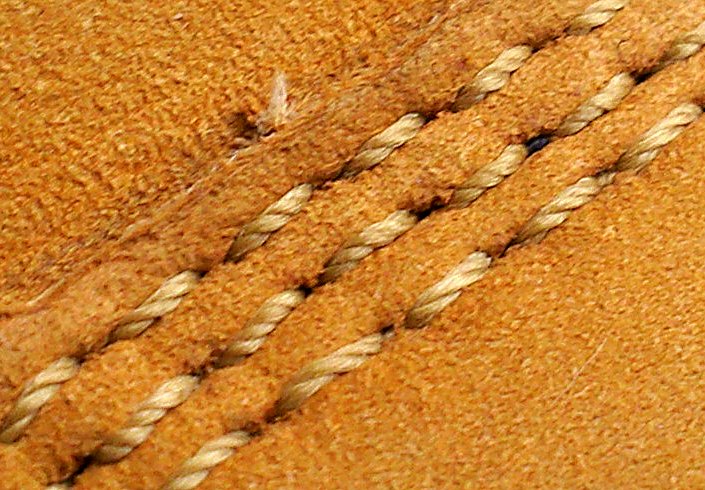 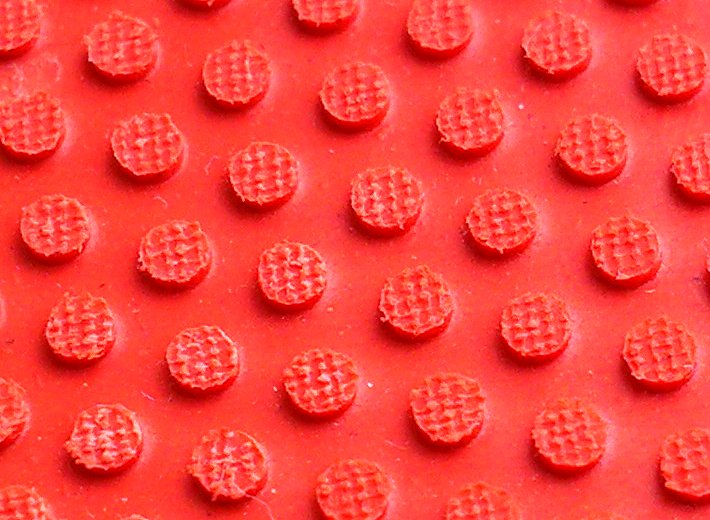 The surface of a table tennis (ping pong) bat 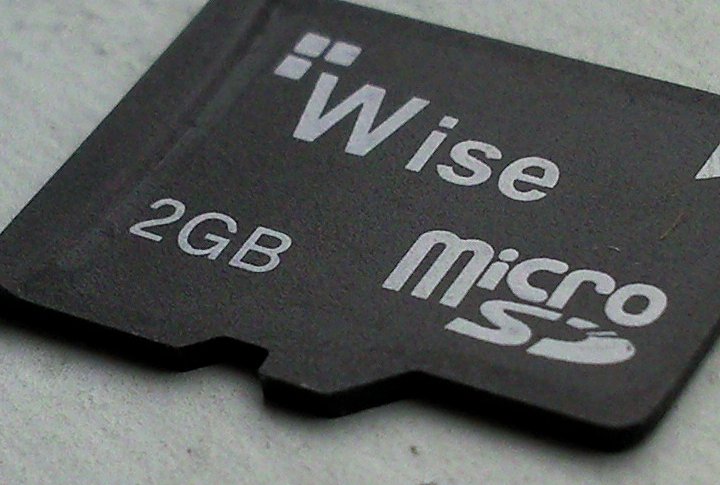 A microSD expansion card. Yeah, I see now why Palm said they couldn't fit a microSD card slot into their new 'Pre' for space reasons. These cards are ENORMOUS! 8-) 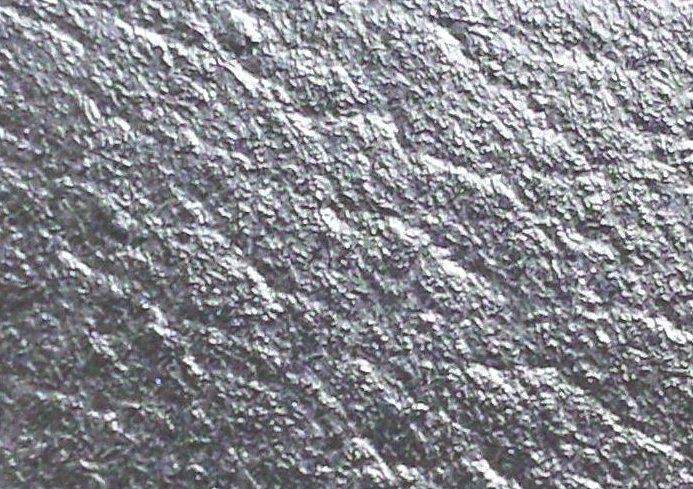 Leather on my E90 phone case 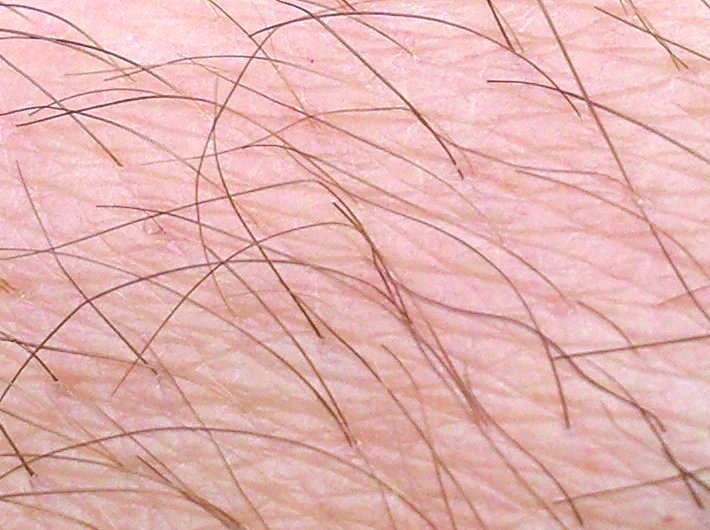 Eeeeek! It's me. Well, hair and skin and.... if this isn't Megapixel Microscopy then I don't know what is! 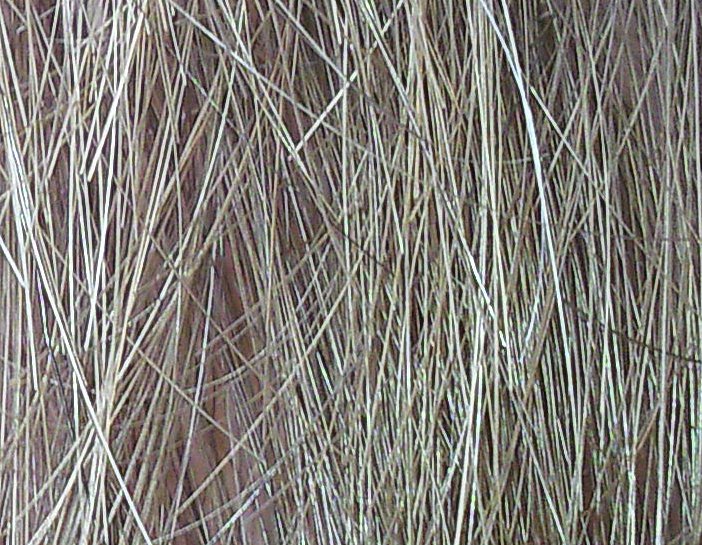 No, not a wire brush. Me again. Hair on the top of my head. No insults, please, go snap your own skull if you want a similar tousled shock! 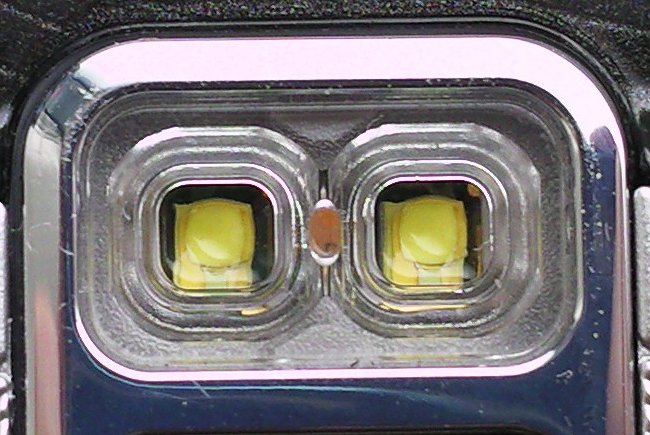 Detail of the Nokia N96's dual-LED flash unit. Spot the inserted red LED right in the middle - I'd never noticed that with the naked eye! 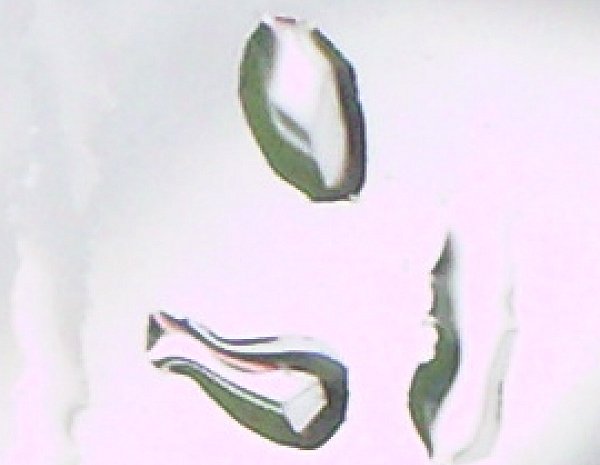 Raindrops on the window! A bit abstract though, so let's make it more abstract and add a bit of Paintshop Pro's 'Hot wax': 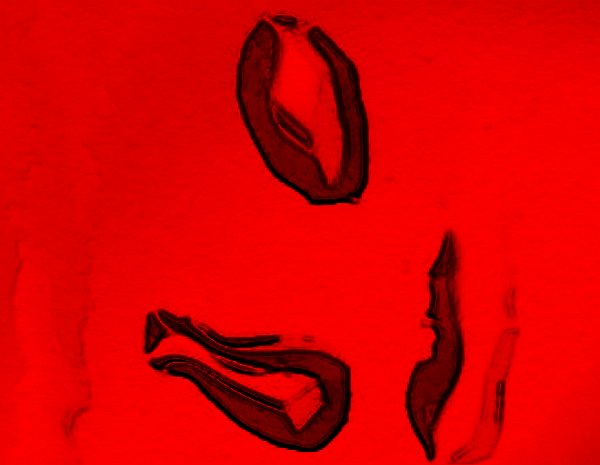 Hey, what a cool new art form. Or am I just sad? 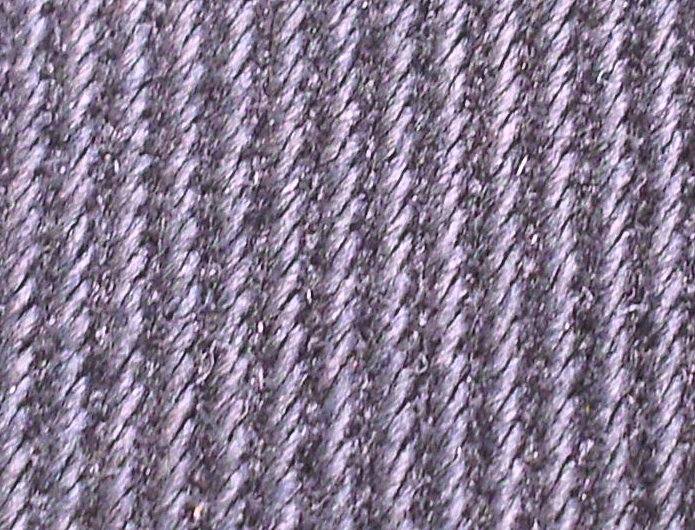 The leg of my jeans! 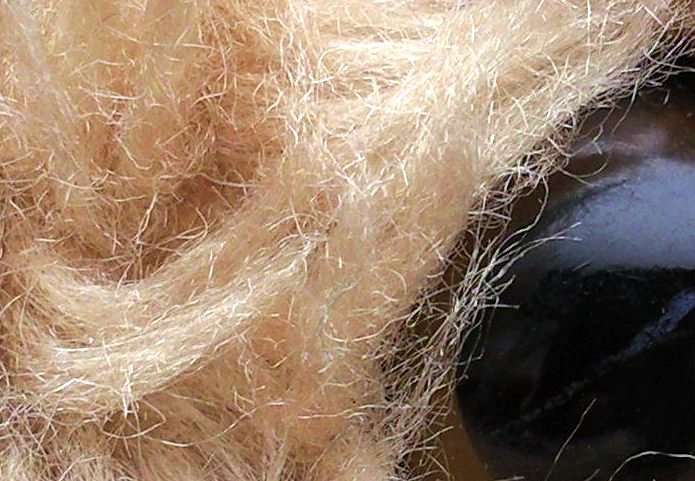 Thread detail from the eye of a teddy bear. To the naken eye, the bundles of threads look almost like single threads. Here we can see every last component, plus straggler threads that can't be seen with the naked eye at all! 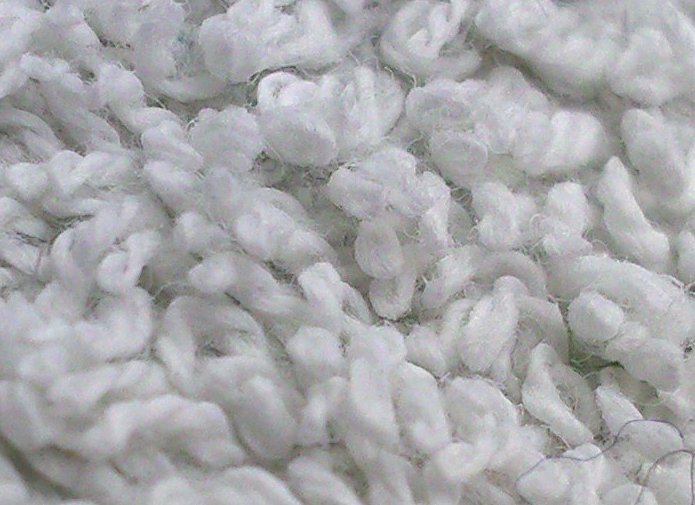 Getting up close and intimate with a towel!

I do hope this feature in the Camera Nitty Gritty series has sparked your imagination. See what you can do with your own Samsung INNOV8. Or Nokia N95, or similar. Remember, for Megapixel Microscopy, you need:

Steve Litchfield, All About Symbian, 25 January 2009