In part 1 of a new series, Steve Litchfield looks at exposed camera glass on some phone models and investigates whether scratches really make a difference.

Moving up to the Nokia N95 8GB from the N95 'classic', I had one big worry, and only one - the unprotected camera 'glass'. As I used the phone day to day, I took to wiping it with a corner of my shirt before taking photos - after all, the glass does tend to collect dust and finger grease and this would be bad news for picture quality.

And rightly so. What I didn't realise was that the wiping process itself was grinding microscopic particles of dirt against the glass (I should have used a clean tissue or dedicated lens cloth) - it looked clean to the naked eye but, when viewed from a certain angle so that the surface caught the light, you could see a grid of tiny scratches - all rather ugly and shocking. This is the result of 6 months intensive and careful use: 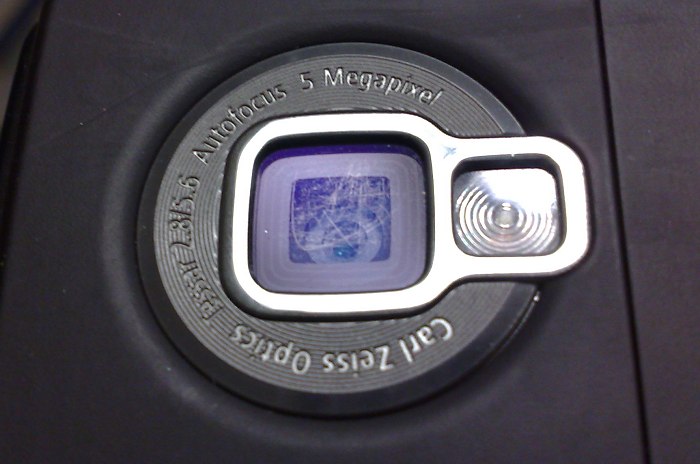 Ugh. Now, the big question, of course, is how does this affect photo quality? I'd expected, naturally enough, that my photos would be more blurry and less detailed than those that would have been taken if the external glass was still in pristine condition. But I ended up being rather surprised - pleasantly.

For this, part 1 in a camera-themed series of All About Symbian articles, I took a pristine N95 classic and the aforementioned 'scarred' N95 8GB, both upgraded to latest v30 firmware. By taking the same photos under identical controlled conditions, I hoped to demonstrate the difference the external scarring made. Here's the first shot, taken in good natural light, indoors: 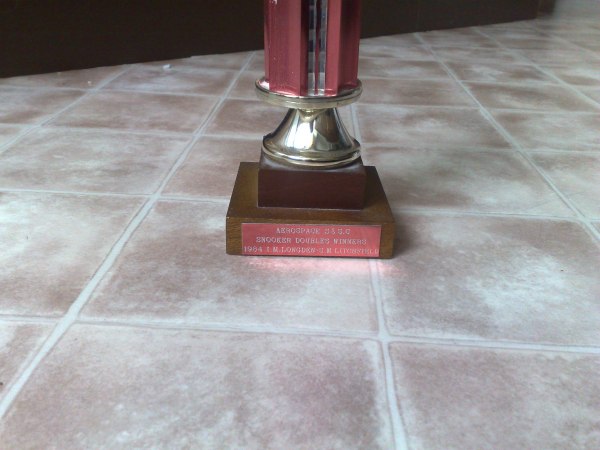 And here are extreme blow-ups, with the N95 on the left and N95 8GB on the right: 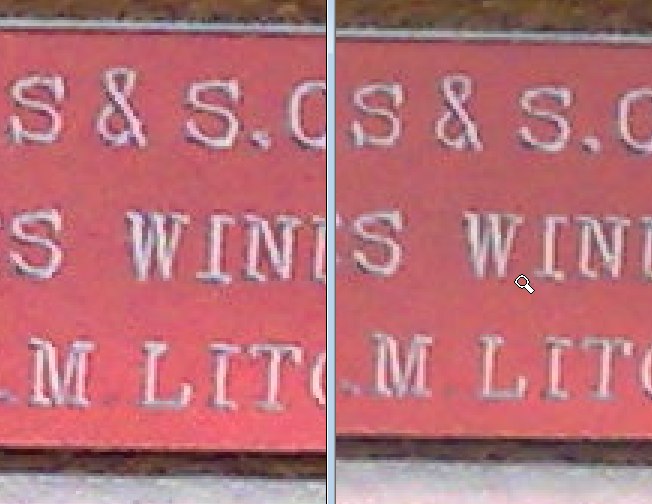 As you can see, the detail is almost identical. Maybe, just maybe, there are better colours and detail in the N95 version... but I'd hate to bet my life on the difference. The N95 8GB version seems more 'noise-smoothed' - I'd hoped that the algorithms in the two devices would be identical, seeing as they had the same firmware, but it seems that some of the image processing happens in the camera's own electronics and is perhaps fixed. 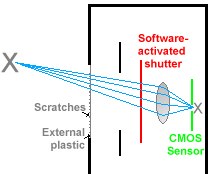 How is this possible? How can the camera on the scarred-glass N95 8GB perform as well as that on the pristine N95 classic? The answer, in normal, diffuse lighting conditions (as above) is that light from each point in your subject arrives the sensor via multiple paths, as shown in the diagram on the right.

So the effect of even 50 small scratches is minimal, with plenty of clear surface area for enough light to get through to register successfully on the sensor. Yes, there's probably a tiny amount of light scattering going on around each scratch, but the effect seems to be negligible.

Now, the brighter and more focussed the light source, the more vicious the scattering effect at each scratch and (potentially) the more detrimental it will be to the final photo. With this in mind, I switched to a pure-flash shot of the same subject. Here's the full image: 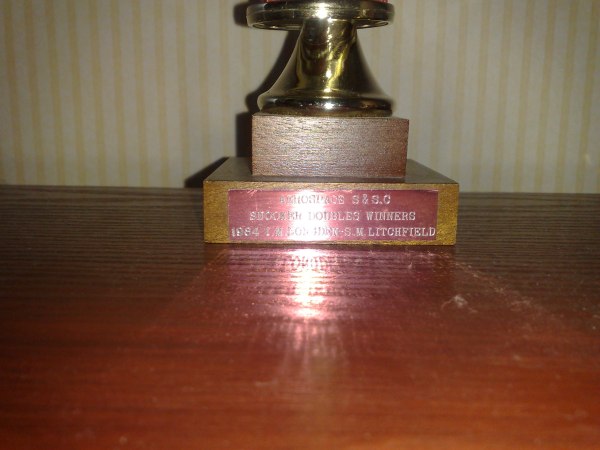 And here's the extreme detail comparison: 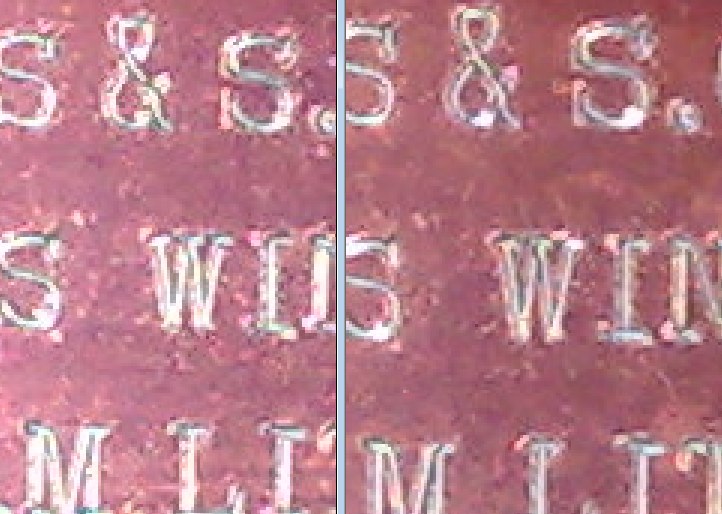 As you can see, the results are similar to the non-flash photo. The N95 classic version shows slightly more light and colour and definitely more digital noise, while the N95 8GB with its extra 'blurring' algorithm deals with the noise but can't quite match the intensity of the original's image.

The other effect I'd been expecting was flare and light artefacts resulting from the flash interacting with the scratches. In an attempt to drive this effect, I tried shooting a photo, with flash, into a mirror. This is, you'd think, just about as bad as conditions might get for a camera with scratches on its cover glass. Here's the same comparison, N95 classic on the left. 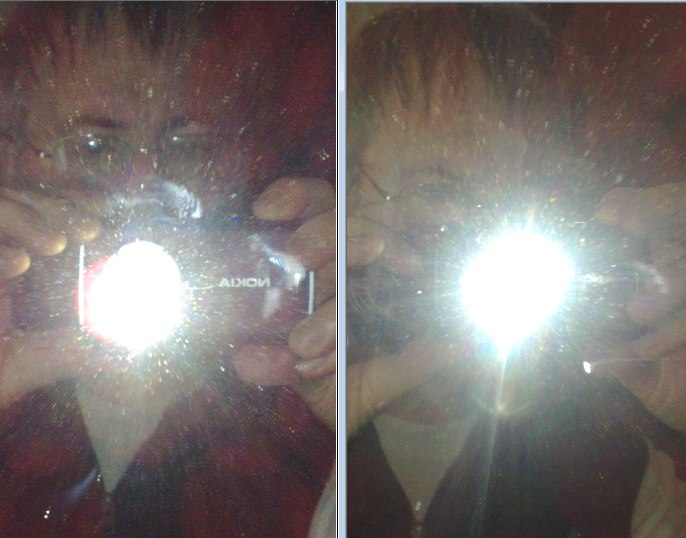 Now we're getting somewhere. Part of the difference is down to the N95 8GB's extra noise reduction algorithms, but I'd argue that there's slightly more flare, and slightly more general haziness and loss of detail generally.

What about taking things to the natural extreme and shooting a subject into the sun? This is something most people try for effect at some point or other - the subject often ends up looking like a silhouette if you're not careful, so it's more an arty than a sensible thing. But it's a good test of the light-scattering effects of a scarred camera glass, so... Here's the result, again with the N95 classic first and then the N95 8GB image below it (both resampled to fit here): 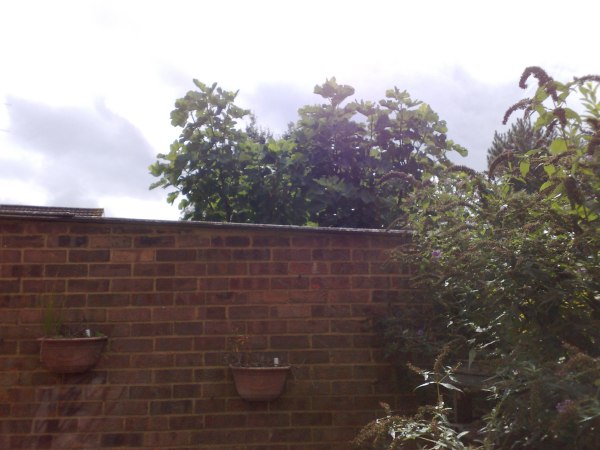 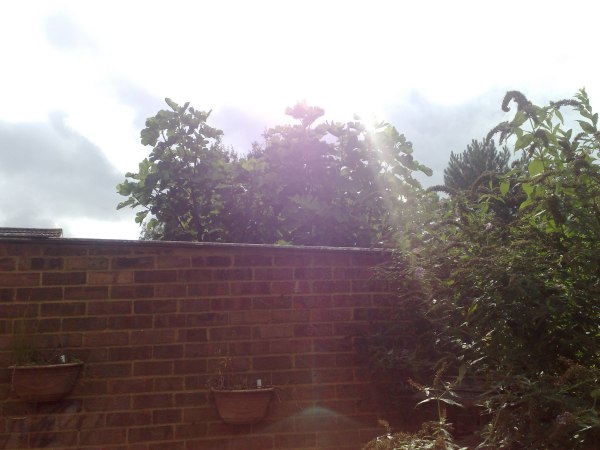 There's a definite extra couple of big sun 'flares' in the N95 8GB image, which I'd put down to interference effects from the grid of scratches on the cover glass, although without knowing the details of Nokia's noise reduction algorithms I can't of course be 100% certain. But extra flare is the right sort of side effects for scratches.

Mind you, as someone going for an 'arty' into-the-sun shot, the extra flares arguably make the photo better and not worse. Arguably. The purist would point out that the shot from the pristine lens was more accurate in terms of representing what the human eye sees. Your call.

I've been dealing here in extreme blow-ups and extreme lighting conditions. The bottom line from this, part 1 in the series, is that for 99.9% of 'normal' photos, you simply won't notice any difference whatsoever between photos taken when your phone is new and those taken when it's lived in your pocket for six months and has some battle scars on its (unprotected) camera glass.

I know that this topic has been much debated online, with Nokia somewhat ridiculed for a bad design decision for the N95 8GB and N96, but, despite my own prejudices, I'm going to side (just) with Nokia on this point. Yes, more protection is obviously better and I'd jump at a protected camera lens model every time, all other things being equal. But hopefully I've demonstrated that the effect on photo quality is, to all intents and purposes, for a phone that's not neglected too much, negligible.

See you in part 2 of this camera phone series!