In part 1 of this series, Steve Litchfield looked at exposed camera glass on some phone models and investigated whether scratches really make a difference. In part 2, he investigated the pros and cons of LED/dual-LED/Xenon flashes in camera phones - does Xenon or dual LED flash make that much difference? In part 3, he investigated the fabled 'Megapixel myth' with an objective eye. In part 4, he focussed on the difference between good and poor optics (at the same camera resolution) and in part 5, he pitched all the top smartphone cameras head to head, in detail. In part 6, AAS guest writer Dirk Snoyt took up the theme of camera phone flash research and got all technical on the theme of colours...

Now, I return with a look at the difference optical zoom makes and ask the question "Is it better to have optical zoom or just much higher resolution?"

With phone camera resolutions getting higher and higher, now at 8 megapixels, is there really any need for optical zoom, a feature which has been only used occasionally in the phone world, presumably for reasons of cost? In other words, when trying to snap an object that's not up close, can you compensate for lack of optical zoom by simply taking the scene at higher resolution and then cropping later on?

Bright, good lighting, a battered sign right in the middle of a park pond... A camera is the only practical way to get a good look at the sign! 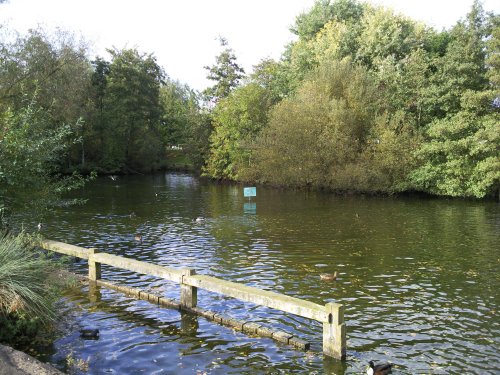 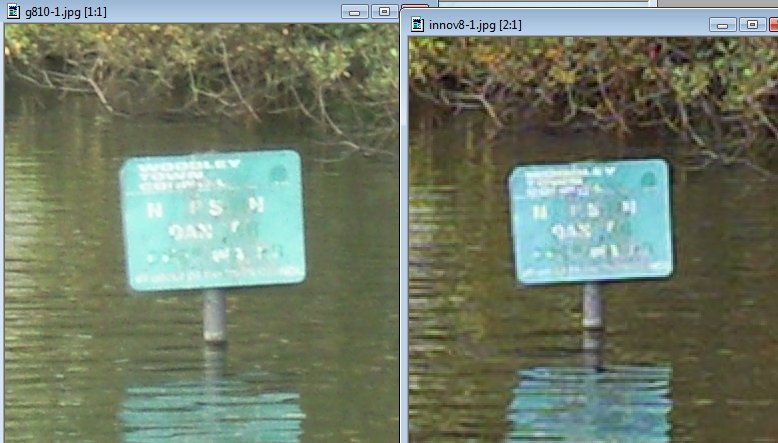 As with the other example photos here, I've resampled the appropriate cropped details so that they're roughly the same size on your screen, for better comparison. The superiority of the G810's proper optical zoom is apparent here. Who needs 8 megapixels when you can zoom?

Moody skies, late afternoon sunshine, but my attention was on the tree in the centre. Let's see how much detail we can resolve with my two test super-camera phones... 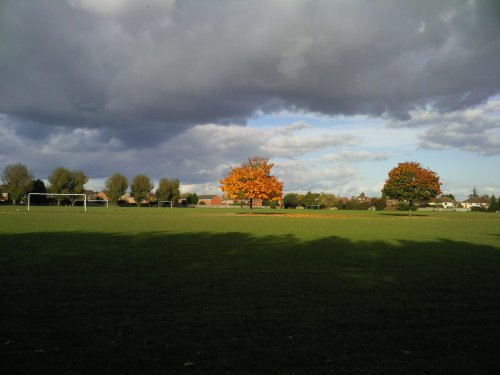 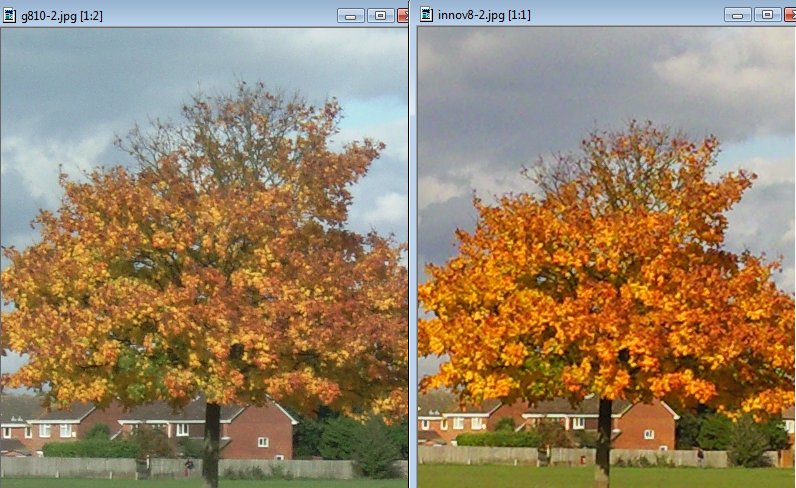 Not quite so much difference in this shot, looking past the Kodak colours in the INNOV8's attempt. Detail levels are comparable.

Overcast, in indifferent light, but a nice sign to latch onto, at about 50m distamce. 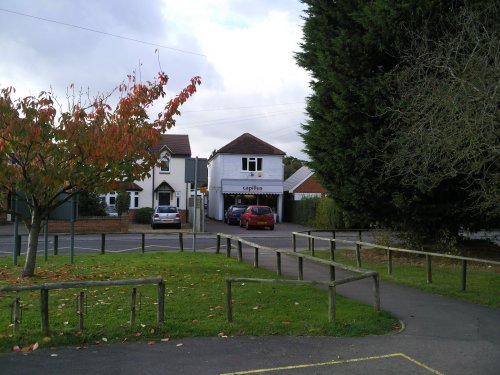 The washed out nature of the G810's images is evident, but it's captured more actual detail - look at the thinness of the 'Hair & Beauty' font.

Indoors, in a school hall, but brightish light and some small and detailed signs to try and capture (and see also the 'Shake' section at the end of this article)... 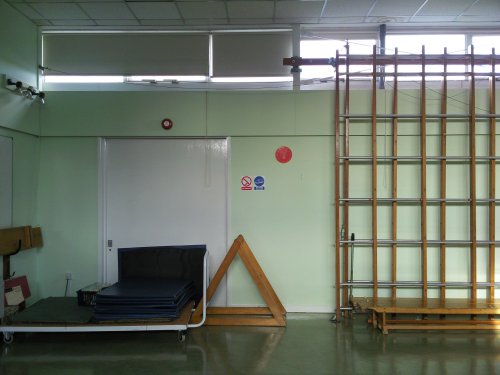 Now this, THIS is proof of how great optical zoom can be. Despite being outgunned in the megapixel department, the Samsung G810, with its 3x optical zoom manages to produce something that's got fabulous detail. Colour reproduction and noise levels are worse, but check out the legibility.

Going back in time

But wait! Before getting too cock a hoop about optical zoom, critics will say to me: "Ah, but the G810 was 5mp, that's not a million miles from 8mp so of course the optical zoom was going to take it past the INNOV's efforts. What about a lesser camera resolution" Good question.

The Nokia N93 is the only other smartphone with optical zoom and it's a 'meagre' 3 megapixels. In other words, almost three times less pixels of stills resolution, which should, in theory, neatly be balanced out in good light conditions by the 3x optical zoom. 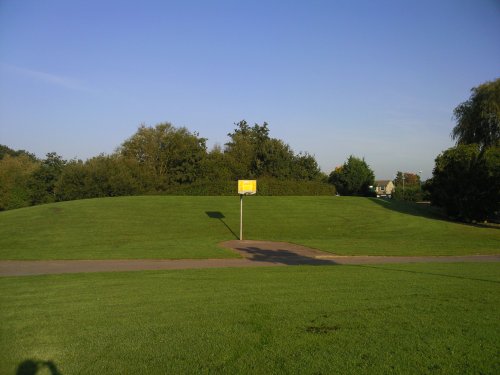 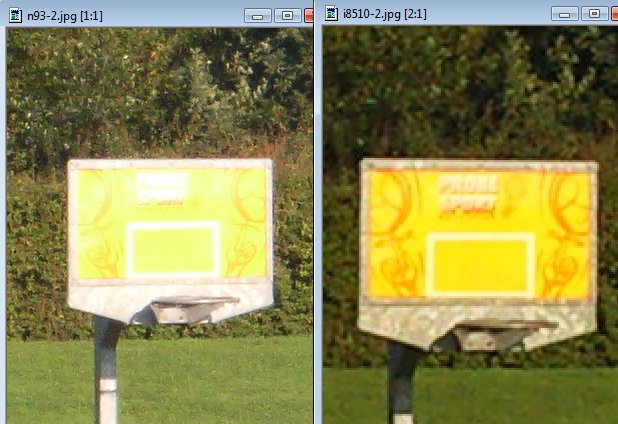 Although there are other good/bad points about each blow-up, I think it's arguable that detail in each subject is roughly the same, proving my point. Effectively, 3x optical zoom is balancing out 3x the number of pixels, enabling, for this sort of subject, the two year old N93 to keep up with the very latest INNOV8.

Not all good news though

There are some downsides to optical zoom that are worth bringing to your attention. 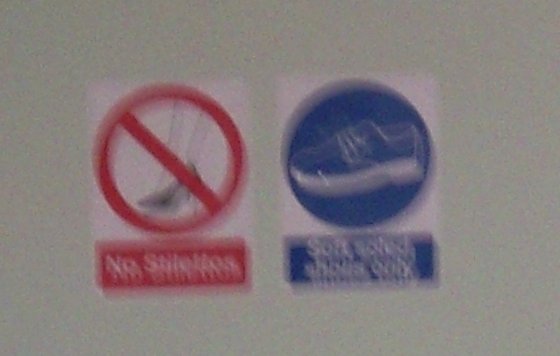 As you'll have gathered from my comments above after each test shot, I'm firmly of the belief that optical zoom is a good thing, despite the caveats just mentioned. You can, just about, get round the lack of it by upping the number of megapixels captured and being prepared to crop later on, but this is a far less elegant solution.

With the Bill of Materials being critical to Nokia and other manufacturers, I don't expect to see optical zoom on many phones in 2009, but I fondly hope to see at least a couple of camera-centric 'specialist' smartphones, the modern equivalent to the N93, perhaps, appear on the market.

The Samsung G810 is pretty close to having an ideal specification, with 5mp sensor, optical zoom AND Xenon flash, but it's currently let down by disappointing photo quality and I'm not sure whether it's the sensor that's the problem, the lack of top flight optics or the phone's firmware. Here's hoping it's the latter.

In the meantime, let's watch out for a Nokia N99 or Sony Ericsson X101, with 8mp sensor, professional optics, Xenon flash and optical zoom.... Well, I can dream.

Steve Litchfield, All About Symbian, 30 October 2008