In part 1 of this series, Steve Litchfield looked at exposed camera glass on some phone models and investigated whether scratches really make a difference. In part 2, he investigated the pros and cons of LED/dual-LED/Xenon flashes in camera phones - does Xenon or dual LED flash make that much difference? In this, part 3, he investigates the fabled 'Megapixel myth' with an objective eye. Part 4, next week, will focus on the difference between good and poor optics (at the same camera resolution). Note that we're also planning on adding some extra technical camera-related articles later on, courtesy of AAS regular Dirk Snoyt, plus an 'Ultimate S60 camera phone' review feature.

The 'Megapixel Myth' is usually quoted along the lines of 'A camera isn't better just because it has more megapixels', referring to the fact that just because there are more dots in your final photo, it doesn't mean that the photo is necessarily any 'better'. In other words, when the phone shop tries to sell you something with an '8 megapixel' (mp) camera, there's no guarantee that it will produce better results than your existing phone with a 5mp camera.

And this is all very true. After all, the quality of a photo from a camera phone also depends on the lens size and quality (i.e. the optics), the (physical) size and quality of the CMOS sensor and the quality of the software algorithms that decode the raw data from the sensor into sensibly sized JPGs that you or I can save, view and print. And, arguably (depending on your reaction to part 1 of this series) on the cleanliness of the external camera glass.

That's a lot of extra factors besides raw megapixels.

Then there's the issue of the limitations of printing/viewing technology and the human eye. I used to print out photos from my 1.3mp Nokia 6630 and, as long as the picture was taken in good light, the results were quite acceptable when printed at 6" by 4", the standard 'snapshot' for albums. So why on earth would anyone want more than 1.3mp?

For these three reasons, 2, 3, 5 and even 8 megapixel cameras have been fitted to the (not so) humble phone. But there's another factor that generally wows an audience: focus. Starting with the Nokia N90 with its groundbreaking (for a phone) auto-focussing 2 megapixel camera, the ability to focus on close-up objects (people, pets, things) and thus snap them in crisp detail rather than it-was-taken-on-a-phone blurriness, has been a major criteria for those in the know, in my view even more important than the sheer number of megapixels.

Of course, trying to get across all the above text in 5 words on a bullet point on a phone display in the High Street is impossible, so you'll understand why the vendors restrict themselves to the lowest common denominator of 'n megapixels'.

But how many megapixels do you need? What's a good baseline resolution to aim for when choosing your next purchase?

In an attempt to illustrate the megapixel myth and to attempt to answer the question, I've taken four S60 smartphones, with megapixel counts:

and in each case I've shot the exact same scene, from the same position, in the same conditions, one after the other. Typically, you'd view a photo printed out at 6" by 4" or perhaps 7" by 5", or on a desktop computer screen, as here - I don't think I'm distorting reality by presenting each photo here at 700 pixels across, hopefully giving you a real world-sized photo that's close to how you look at your own snaps, i.e. at roughly the same size, or perhaps a little bigger - for those like me with tired eyes!

I've also tried to vary the conditions and test. Let's see how the four devices do and at what point you and I might say 'OK, that's perfectly good enough': 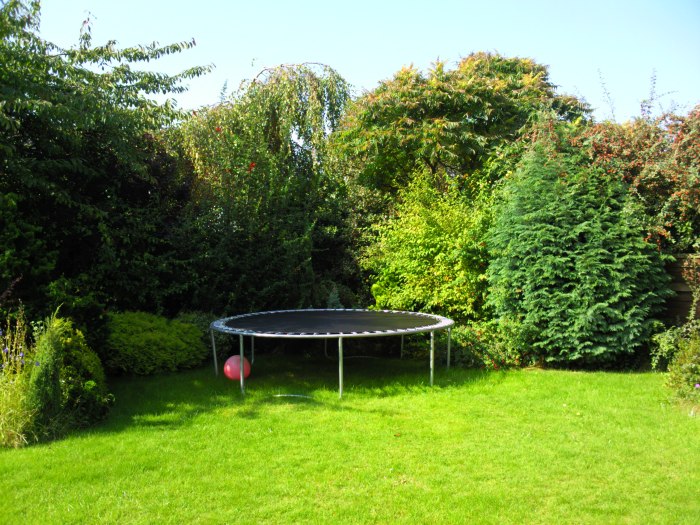 A nicely coloured sunny snap, courtesy of the Samsung i8510. Which of course is totally overkill for casual snaps like this. Moving on.... 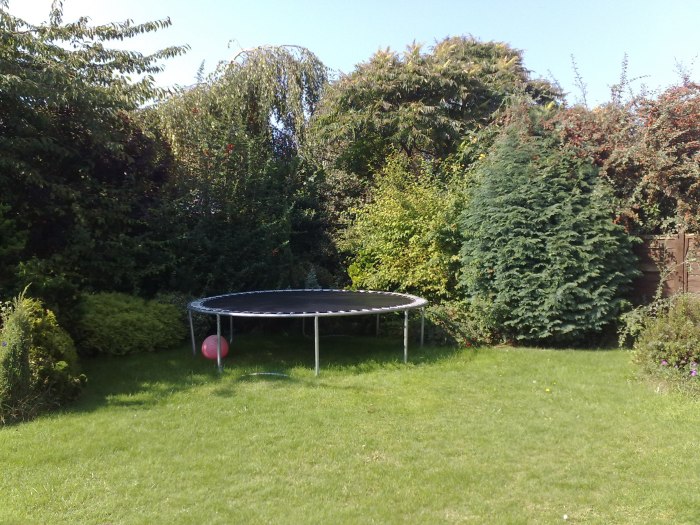 As ever, the Nokia N82's photos look a bit washed out. Clear, but not as vibrant as the i8510's. Still, we're looking at resolution here, not photo quality. Colouration aside, there's clearly little difference dropping down to 5 megapixels. 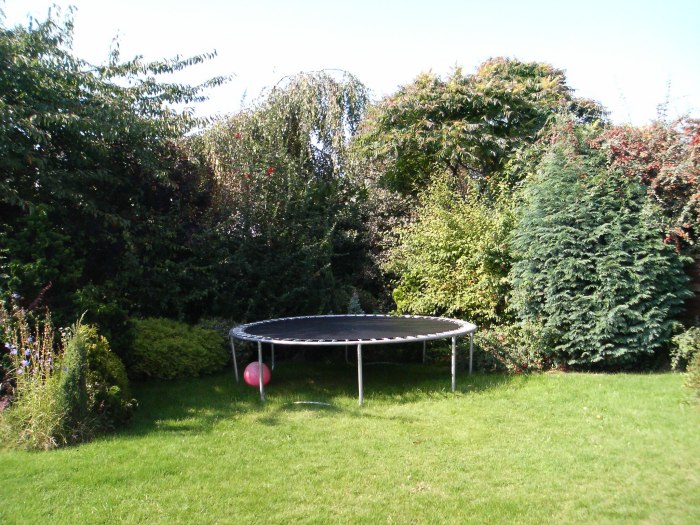 Now this is the N93's take on the scene, with slightly better colours than the N82 and, arguably a more accurate rendition of real life. There's still no problems with resolution though - and if anything the N93's lack of annoying digital noise reduction algorithms mean that the photo is sharper and more detailed. Clearly 3mp is more than enough. 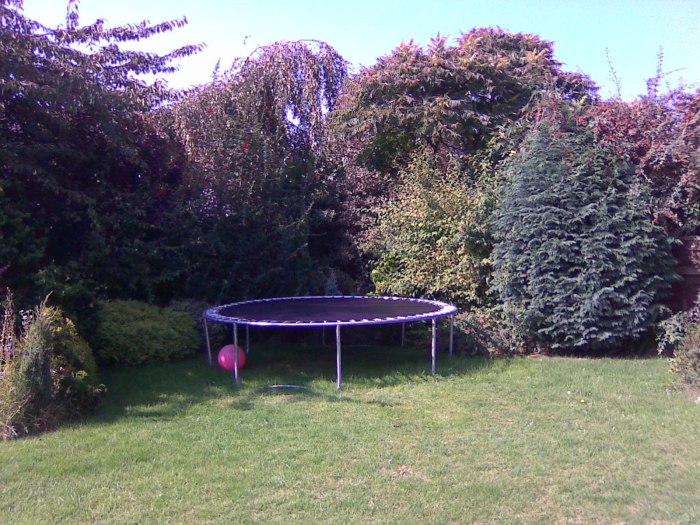 Ah. Now, you've got to look past the wierd purple tint, possibly a by product of too much sun getting into the 6650's cheap optics. Look at the detail in the photo and you have to conclude, like me - and backing up the 'megapixel myth' - that for simple shots in good light (and in this case with no special focussing needs), even 2 megapixels is perfectly sufficient.

Next up was a rather dilapidated gate that took my eye, being well lit and nicely shaped for a photograph. Here's the i8510 image: 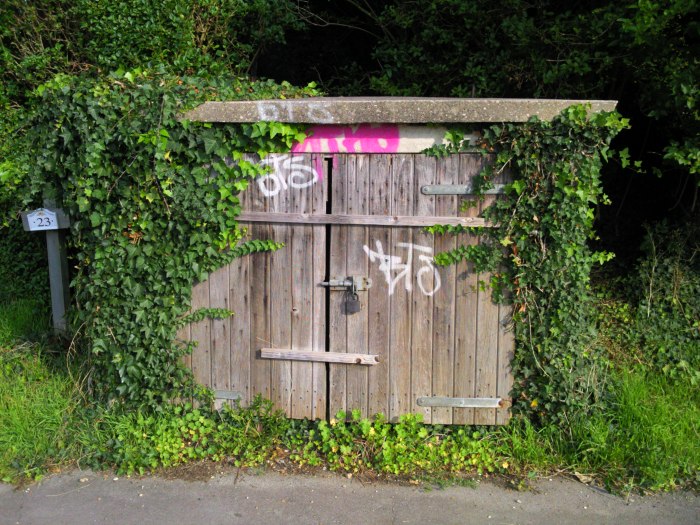 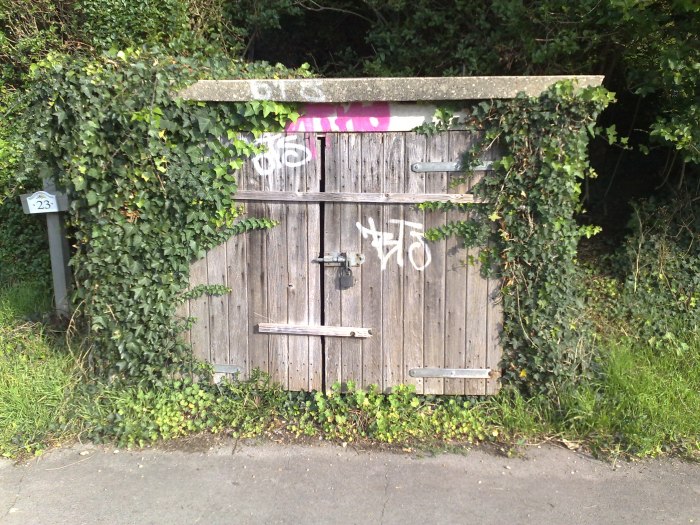 Just as before. Good photo, with the colours distinctly muted. Now for the N93's take: 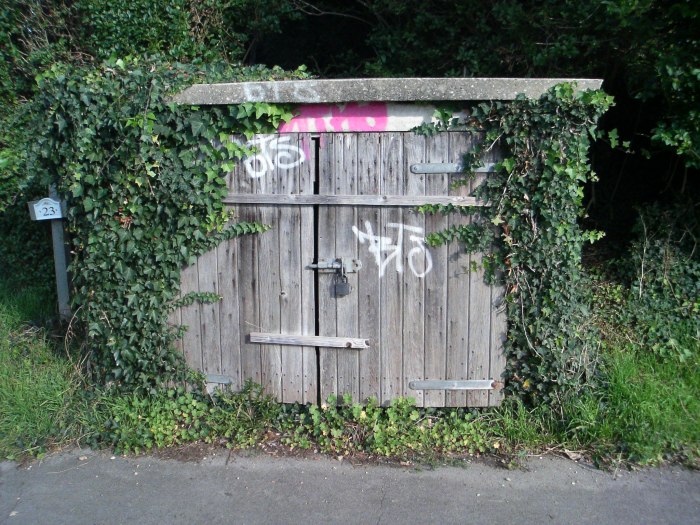 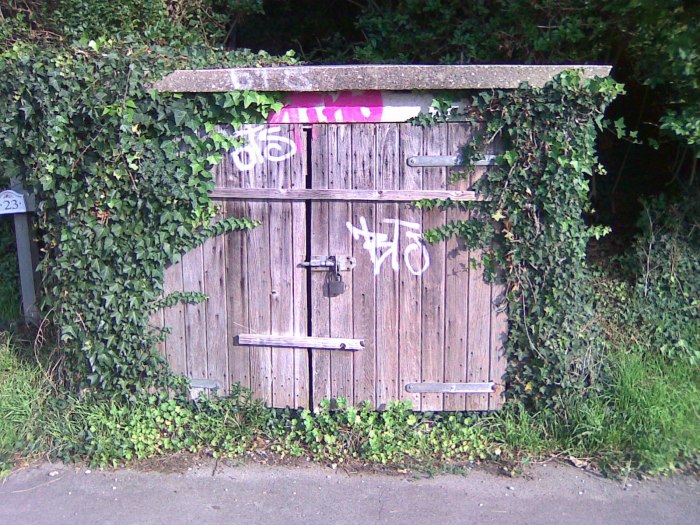 Again there's that slight purple tint. And this time I think you'll agree that the shot isn't quite as detailed as the N93's, the image isn't quite as crisp. Perhaps some of this is due to there not being any focussing going on, another drawback (N90 and P990-aside) of 2 megapixel cameras.

As I said above, one of the main advantages of a higher number of megapixels is that you're free later on to crop the image and still produce a pleasing result. This forms the basis of the next test. Using a highly trained camera-person (ok, my wife), I had them shoot me from about 1.5 metres away, a typical distance when shooting friends or family. With the wide angles featured in today's camera phones, there was too much 'surround' (garage roof, next door neighbour's house etc), so I cropped just the central section, using around a third of the image area in all.

Here's the result, i8510 first, which should have no trouble with such a trivial task: 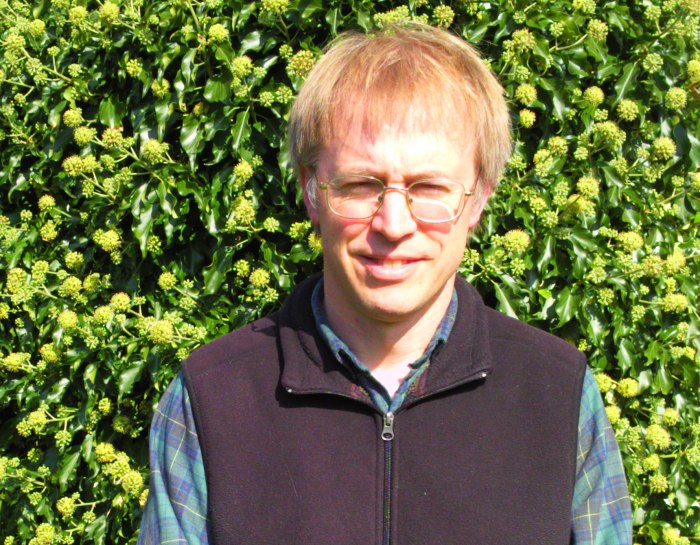 There's good colours and detail, with perhaps inflexible handling of the extremes of light and dark. I was using default settings on all photos, by the way, as a new user would. Now for the N82's attempt: 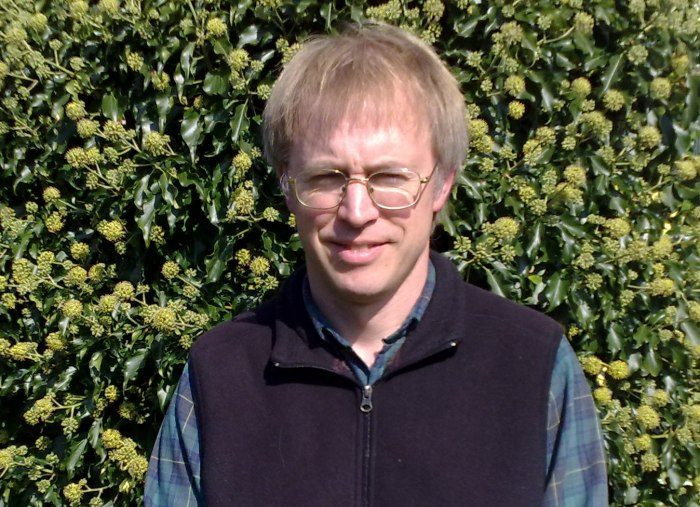 Super detail, super focussing and only (again) slightly muted colours. Again, even after cropping away two thirds of the photo (by area), there's still plenty left for a cropped version. Now for the N93: 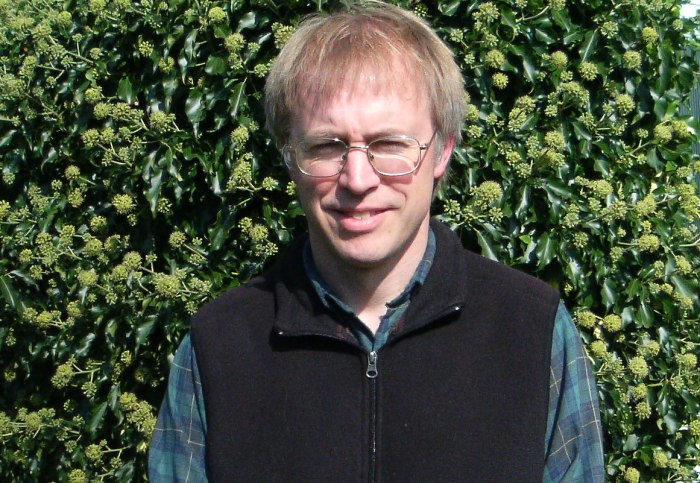 Yet again terrific colour and detail from the N93, so (surprisingly?) even three megapixels seems perfectly adequate, even when cropping out just a section of a photo!

I'm wincing a bit before digging up the 6650's attempt, but here goes: 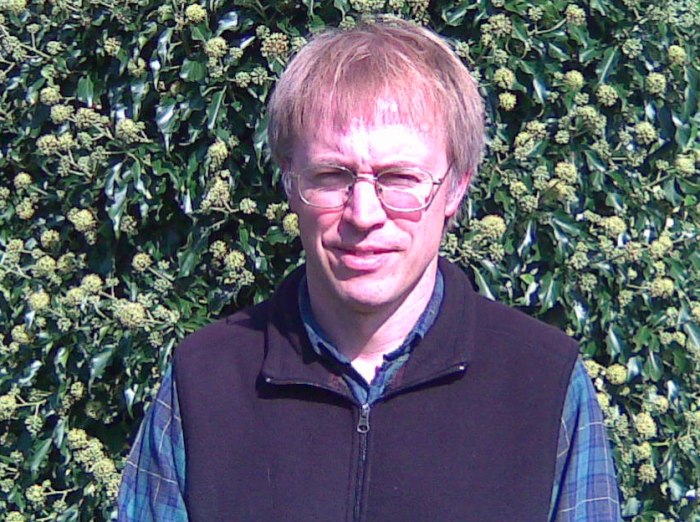 Leaving aside the red/purple tint again, and also leaving aside the optical defects (after all, there's no Carl Zeiss lens or sensor etc), it's obvious that the resolution is really a limitation here, with indistinct detail in the foliage and a less than pleasing result on my ugly mug.

Non-auto-focus cameras, like the 2mp unit in the 6650 are great for ad-hoc outdoor snaps, mainly because there's no need to wait while focussing takes place, and you can just about get away with printing the results, as long as your subject isn't too close and the light was good enough. But you're very limited overall. And you're on the verge of photos which are truly unsatisfactory. Cropping a central section is a very common thing to do on a digital photo (you can do it on phone or desktop) and the moment you start doing that you need a few extra pixels.

Which is what the two year old Nokia N93 delivers, with its 3.2mp camera, enough detail to print smoothly on 7" by 5" paper, even with a degree of cropping, or to view full-screen on a PC or TV. And it's helped by the way detail isn't masked by software 'fixes'. It's also helped by the Carl Zeiss optics, a fact made very apparent if you ever compare 3mp photos from the likes of the N93 and a generic Windows Mobile 3mp phone - the latter's images will be far less impressive. I'll be investigating this subject in part 4 of this series.

Then we come to the 5mp images from the N82 (or N95), also from a device with Carl Zeiss optics. Tremendous detail and, with 5mp, enough pixels left over to handle quite savage cropping later on and still be useable. Or to blow up to A4 or even poster size, of course! But you don't really need 5mp for day to day shots - you really don't. And this, in a nutshell, is the crux of the megapixel myth.

Going up to 8mp, in the case of the Samsung i8510, the pixel numbers start to get silly - 3264 by 2448 indeed! That's just crazy, with heading towards two orders of magnitude more pixels than the first phone cameras (VGA). And no, you don't need all of them. And you have to find space on your memory card for the larger 2 to 3MB image files.

All of which sounds like I'm dismissing the new generation of 8mp camera-equipped super-phones. Not at all, more can be better - just not always. And, like I say, you really don't need 8mp.

"More megapixels is better" - yes, but only up to about 3 or 5 megapixels.

If I had to recommend a 'camera-centric' phone to a newcomer to the field, I'd say go for something with proper auto-focus, Carl Zeiss (or Schneider Kreuznach or similar) optics and at least 3 megapixels. Job done.

I'll be back next week with more camera-centric investigative work!