In part 1 of this series, Steve Litchfield looked at exposed camera glass on some phone models and investigated whether scratches really make a difference. In part 2, he investigated the pros and cons of LED/dual-LED/Xenon flashes in camera phones - does Xenon or dual LED flash make that much difference? In part 3, he investigated the fabled 'Megapixel myth' with an objective eye. In part 4, he focussed on the difference between good and poor optics (at the same camera resolution) and in part 5, he pitched all the top smartphone cameras head to head, in detail.

Now, AAS guest writer Dirk Snoyt takes up the theme of camera phone flash research and gets all technical on the theme of colours...

We all have seen a rainbow in our lives. Beautiful colours created by the prismatic effect of raindrops in the sky. Each drop breaking the light of the sun into its component colours. Similarly, each type of 'white' light source sends out its own unique combination of component colours. Each combination at a specific intensity ratio to each other for each unique type of light source. Think for example of the yellow white light of a candle or the blueish white of fluorescent tubes. Our eyes naturally adjust to these different types of white, normalizing them as though they were daylight, at least as much as is humanly possible. Yet, even adjusted, many colours look different in candlelight than in fluorescent light. And colours in both artificial lights look still different from as when seen in the light of our sun.

The colour spectrum of the sun is often considered the 'ideal' and many people consider a flash that produces a light that closely resembles the colour spectrum of the sun to be the ideal flash. Imagine a flash that has no red, blue or green light component? Pictures would give you the idea of being colour blind. A flash lacking sufficient red would make things look bleak and without warmth. Purple tints would look blue and orange turns yellowish green. You get the idea.

In the range of artificial light sources, Xenon is known to approach the sun's colour spectrum pretty well in the visible range, roughly [380-750nm]. As such, Xenon is very popular for flash lights. Add its short flash duration, reducing motion blurring of a photo and it is easy to understand its popularity. The next figure (fig ref. http://www.asahi-spectra.com/news/pdf/max301.pdf) shows the typical spectral frequecies produced by a Xenon light.

Note the smooth continous curve with almost constant intensity between 380 and 750 nm.


There are basically two types of white coloured LED lights. White LEDs that produce white light by emitting the three basic colours: blue, yellow-green and red. And white LEDs that use a blue or UV LED with a phosphor material to convert monochromatic light to a broad-spectrum white light. Here are two plots from the wikipedia about the subject. 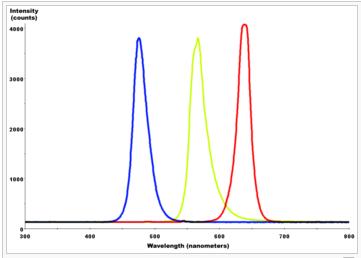 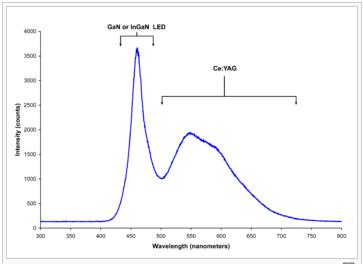 The rgb-LED clearly is missing several colour frequencies. Clearly, a photo taken with the rgb-LED will miss some colours being reproduced. Making some colours look natural and others unnatural.  The blue/UV phosphor LED has a strong peak in the blue colour range and is very weak in the red colours. As such, we can expect the shots to be dominantly bluish and weak in red. This will require fancy post-processing to make the colours look 'natural'. But missing colour information that is not present in your photo in the first place, cannot be reconstructed. Noisy red colours (low red colour intensity in the flash) can be enhanced by saturating the red colours and filtering out noise, but only as much as information is really there.

As a result the rgb-white LED will produce a nicer, whiter white, compared to the second single blue/UV LED, which will tend to be more bluish. Both are, however, far inferior to the nearly continuous colour spectrum of a Xenon flash. Let's take a second look at Steve's pictures from last week. The flashed images of the N95 and N79 looked awful colourwise. Here I put them first through GIMP to manually adjust and enhance the colours - I enhanced their histograms, white balance and colourresponse curves to make the drum logo look white without distorting the rest of the colours too much. The N79 has still a bluish tint, creating the impression of being a blue/UV LED light. The N95 looks better, with a more natural white, but it still has a flatter colour spectrum than the N82 shot, creating the impression of having the more expensive but weaker RGB LED. 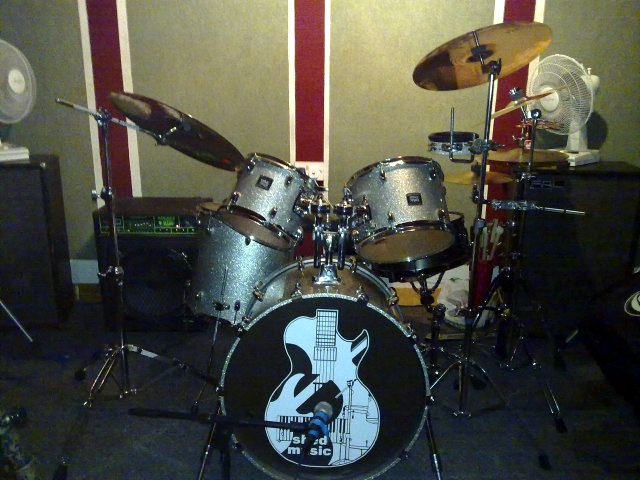 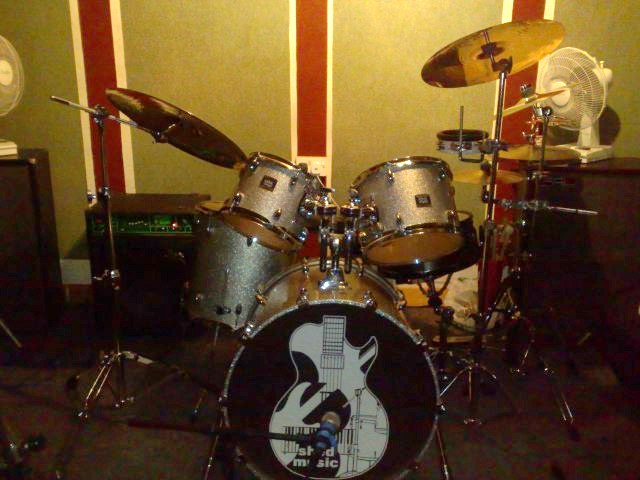 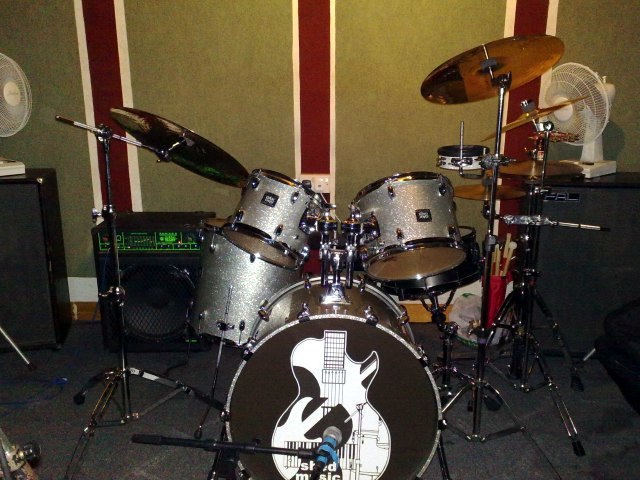 The next two comparison shots, between a N82 (first) and a N95 classic (second) demonstrate all these properties even when flashing an object as near as 30cm. Note that the most red colour pencil with a blue shell is the colour 'Crimson Red'. You can even see the almost fluorescent qualities of the light blue Karisma water pencils in the N82 shot. The N95 makes a valid attempt but oversaturates its red colours and gives the crimson colour a bluish tint. There is no postprocessing on these images. 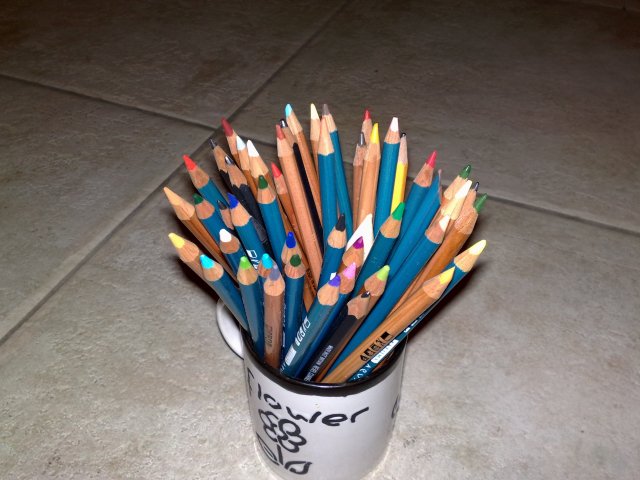 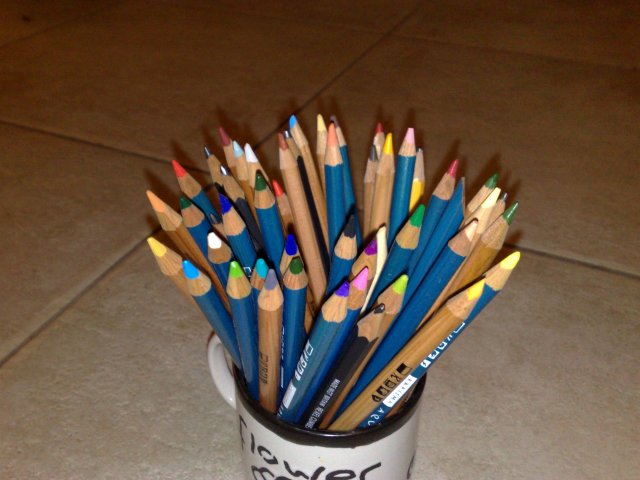 As you all know, the Nokia N95 and its bretheren have a 5 megapixel cmos sensor. Occasionally, depending on the quality of the sensor, some pixels might not work as expected. Pixels can be dead or semi-dead. A dead pixel does not change its output value depending on the amount of light, it is set at a fixed value. Semi-dead pixels only react a tiny bit i.e. 80% of the value its neighbour might yield if it caught the same amount of light. Low quality cameras can have more than just single broken pixels: whole lines, or clusters (of connected) pixels can be broken. So let's test the sensor. Since the Nokia has a form of auto-exposure it is difficult to capture, I took the next image with my N82: 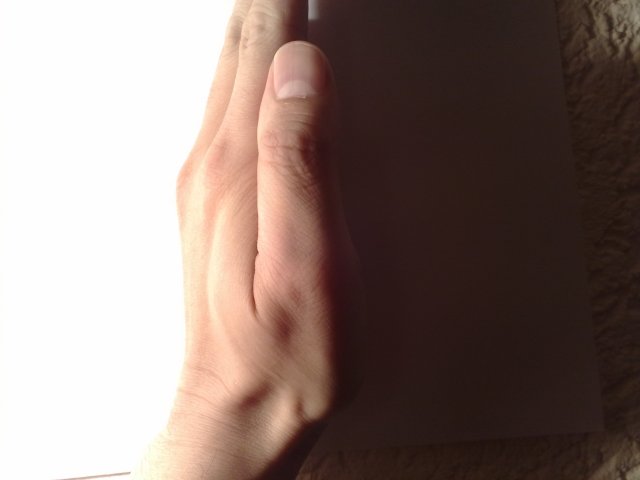 Looking at a close up of the original picture and blowing it up, I can see all pixels work as they should. On the white side, all pixels are nice, evenly white and on the dark side all the pixels are dark (and a bit noisy) as expected. Taking a second shot holding the camera upside down can test the white side for dead pixels that are white, and the dark side for dark dead pixels. It looks as if my N82 is pixelperfect. ;^) Terrific.

Now, what about those night shots with the dark specks in them. You mean like these: 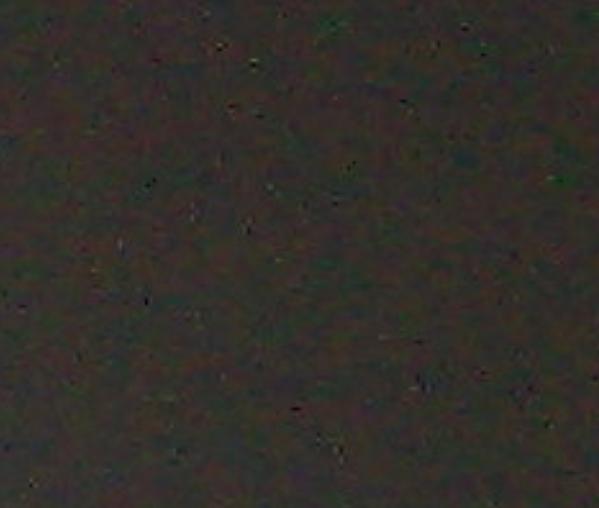 This is a blow-up of a photo by my N95. It's a bit underexposed and you can see lots of dark specks - which look as if there are pixels broken. However, this is not the case. If you compare multiple photos side by side you will see the dark specs are not in the same spots. In fact they are completely absent, in the test shot above. These dark specks are the result of underexposure on a particular pixel (there just isn't enough light coming in to register reliably). The noise is typical, i.e. normal for cmos-sensors and even occurs on cameras like the Casio Exilim EX-F1 under low light conditions. My old Canon Powershot S60 with a 3.2megapixel CCD-sensor does not suffer from this effect.


The N82's Xenon flash is superior not only in intensity and flash duration but also in colour reproduction. Furthermore, both my N95 and N82 sport an excellent sensor quality. I found no dead or semi-dead pixels in both my devices. In underexposed (why else call it that) shots, speckle noise typical for a CMOS is visible. Having done this, I now look forward to how the INNOV8 will hold up to these tests. The N95 and the other Nseries devices with 5 megapixels have set a very high standard that few other camera phones can compete with.