Steve Litchfield gets all picky about video capture on Nokia's latest devices. Is there a problem?

If you're into snapping video clips on your smartphone, perhaps of family or friends, for later watching on a big screen, via TV out or DVD, then you'll be interested in the quality produced by the device. Now, we're not talking pro-camcorder quality, but it's got to be good enough to be watchable.

There are two issues here, having experimented with video on two Nokia N96s and an N79. In each case, video clips came out less clear (and with a noisier soundtrack, though that's an article for another day). Incidentally, for these tests I'm going to be using a Nokia N96 with latest v12 firmware, plus my trusty N82, with v30 firmware:

Can you shed any light on our theories, based on your own tech knowledge and the evidence below? If so, please get in touch in the comments below!

Taking video of a house about 60 metres away and then grabbing a frame, cropping and zooming in by 2:1, we get:

Interestingly, the N96 video grab, on the right, is smoother and better coloured than the N82's. I hadn't expected this. Maybe Rafe is right?

In this case, holding the camera at arm's length and using the same grab/crop and zoom procedure as above: 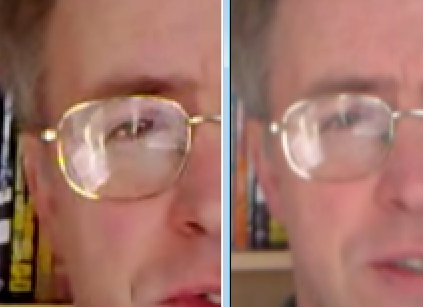 Again the N96 frame grab is on the right. This time the N82's video image is much clearer and better 'focussed'.

I was curious as to whether the N82's image was better because of different processing algorithms, so I artificially added 10% contrast and lots of sharpening to the N96's frame grab, in an attempt to simulate what the N96 could do in software if Nokia were so inclined. Here's the result: 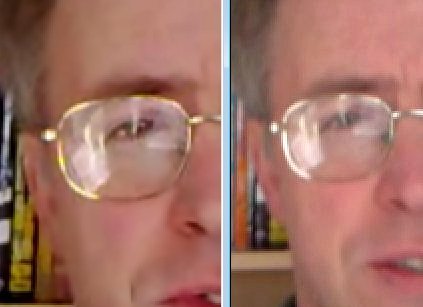 The N96's framegrab, even processed, isn't as good as that from the N82.

So, I'm calling out for more data points and theories here. Based on your own video capture experience on other Nseries devices, including the N79, N85 and N96, where do you think the differences lie?

The better quality for distant objects certainly points to Rafe being correct in that the focussing's simply set at a different point. Annoyingly, since you'd have thought that the main reason to have video recording in a phone is to record family and friends - who are likely to be close up. If this is the case, bad call Nokia.

Or perhaps the distant photo test was a red herring and quality's almost always better on the N82 (and N95 etc) because of the extra graphics acceleration hardware helping out?

Or perhaps Nokia simply haven't finished twiddling with the firmware in these newer devices and, once they find the offending bug or setting, all will be right again and results similar to those on older devices?

Your help needed here, I think.

Menneisys and others on the technical bleeding edge, can you add to this debate?

Steve Litchfield, All About Symbian, 9 Dec 2008