Our continuing review of 2007's superphone... Attacked by the blogosphere

After various references to the camera and GPS being big drains on the Nokia N95's battery in previous parts of our Nokia N95 review, it's time to investigate whether the 950mAh BL-5F slimline battery really is up to the job or not. True, the N95 is a long way from having a good battery life, but it isn't so unusable that the buying hordes from the High Street are going to be returning them en masse.

The initial reviews of the N95 have been by tech journalists and bloggers who have only had their devices for a couple of days, during which they've been thrashing the N95 to its limits and never letting the thing alone. GPS, Wi-Fi and especially the camera have been used intensively.

This is far from the real world use of the device. Away from the absolute cutting edge geeks, journalists and early adopters, users will be more forgiving. And I've got the proof.

Having charged my production Nokia N95 overnight, I've been logging everything I did with it during the day, trying to enact a 'typical' day in the life of a real world N95. No extended two hour navigation tests and no hour-long camera sessions.

A Day in the Life

07:30 'Battery full' (7 bars) Phone set up with Wi-Fi scanning off, Bluetooth ON and visible and connected to my PC while in range, network set to GSM only, display brightness set at default, in other words a fairly typical mid-range configuration. Let's see how it fares during the day....

15:27 until 15:40 PIM use and starting using the N95 with the Nokia Bluetooth keyboard to type the first few paras of this article(!)
15:41 Did a PC Suite sync via Bluetooth
15:42 Did an Image store sync via Bluetooth, to get my new photos onto my PC
15:50 Had another phone call, 1 minute again

17:25 until 18:25 An hour of continuous music playback, half of it over speakers (quality is pretty good considering their size)

Think back a few years (around 2000) to when mobile phones were phones and sending a text message was the height of high tech. Think back also to when the first handheld GPS receivers appeared. I had one and it ate four alkaline AA cells in four hours straight. Think back to the first digital cameras - these were almost as hungry on battery power. Ditto the average iPod, which will drain a full charge in a dozen hours of use.

Now consider that the N95 'phone' is handling Internet, Bluetooth and voice communications, monitoring your Calendar and Clock, providing GPS and stills/video camera functions when needed, and so on. And, with the 'typical' (actually fairly intensive) day outlined above, it managed to get through with enough power left to make a few last calls if needed.

So, your 'old' phone could go several days without a recharge? Well, guess what? With all the things it does, the N95 won't. Get over it. 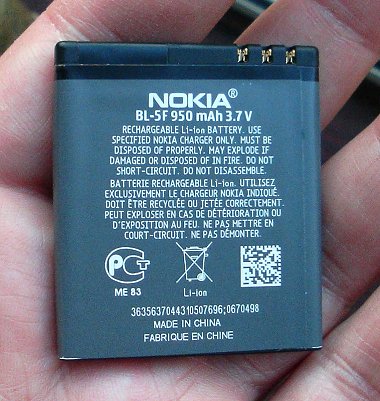 And, if you decide to take it in-car, as your navigation device, guess what - you're advised to plug it into a 12V charger (though I didn't in my car-based sections of the battery run-down day test above). And if you should use it to film an entire day out with the family (instead of taking your standalone camcorder) then take along the Proporta device charger or similar for a top-up if needed.

My aim in logging a day's use was to see how the N95 coped with a barrage of 'real world' tasks. That my N95 has already been through dozens of full recharge cycles probably helped too. But the end result, a device that worked to the end of a long day, albeit without that much charge to spare, shows that some of the damning criticisms of the N95's battery life are somewhat premature.

I maintain that, used sensitively, the N95 will get you through most days too - at least get you through to its nightly mains recharge. Yes, I'd have loved Nokia to have sacrificed a little in terms of low weight in order to have squeezed in a battery with 50% more capacity. Maybe there will be an after-market extra-capacity battery, with replacement sliding battery cover? Calling Proporta - now there's your next project!