File this review well and truly under 'Really? This app is still going?' - ChessGenius has been around the Symbian world for many years, we even looked at it in 2006 briefly, on S60 3rd Edition. Wow. Seven years ago. Making it all the more remarkable that ChessGenius has not only survived well into the era of nHD screens and Symbian^3, it's fully compatible with the latest Belle FP2 phones and had even had updates in the fairly recent past. And, with that seven year gap in mind, here's a 2013 review of ChessGenius on the Nokia 808, powered by the fastest processor in the Symbian world. Taking on the game's chess engine under these circumstances was more than a little daunting...

I suppose, before starting, I should state my level of competence to review a chess game. I'm no novice and have read several chess books, playing the game on and off for the last 40 years. I did once take grandmaster John Nunn to about 45 minutes, but that was (ahem) when he was playing a dozen of us at the same time....

But I'm no chess wiz, it seems I lack the imagination to be brilliant at the game - I can play strategically and avoid making silly mistakes, but I don't have the forward thinking and ultimate skill to win against good players. Ah well, there's always tech writing to fall back on...(!) 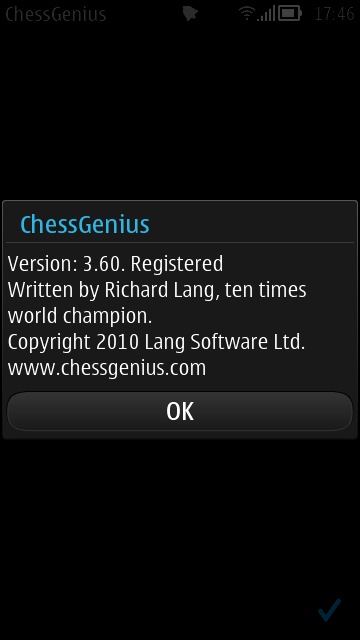 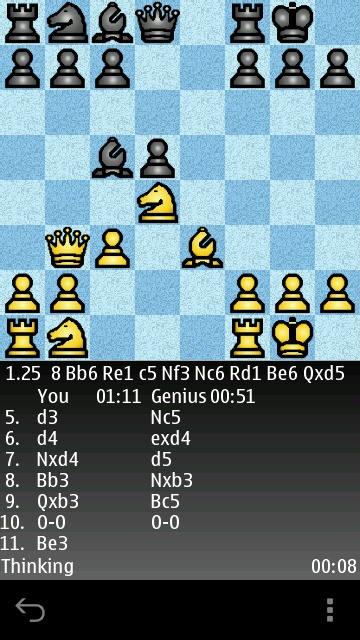 Though there are extras (such as setting up a particular position, for analysis), ChessGenius is at heart a chess game, where you pit your wits against Richard Lang's award-winning chess engine. And then you lose. OK, on the easiest skill levels, ChessGenius has been programmed by Richard to deliberately make mistakes(!), so that, as a chess novice, you feel like there's a possibility of winning.

The rest of the time, you'll be losing, but don't feel too disheartened. Chess is, and has always been, a mental battle and a struggle to improve. In other words, just by surviving longer and playing matches against an entity stronger than yourself, you'll learn and get better. And therein lies the challenge, the 'fun', if you like. 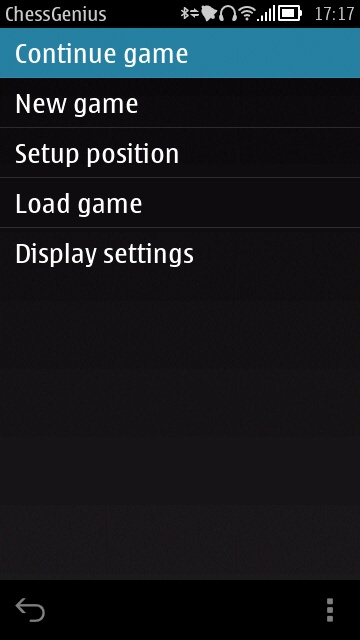 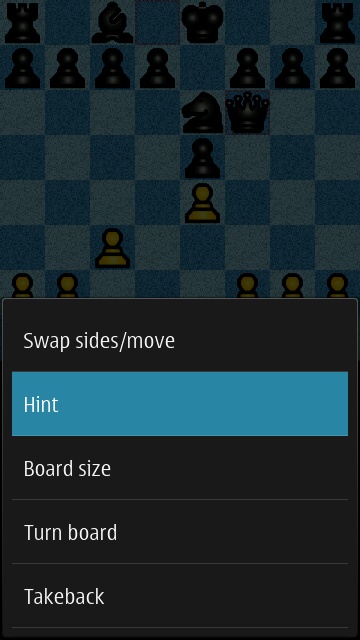 Standard Symbian UI elements are used throughout - these necessarily appear a little bare bones, but they do the job and they do it well (note again I'm using my favourite Belly Jean theme!)

Note in particular some of the menu items within a game - ChessGenius is extremely flexible in how play is organised and doesn't get upset in the slightest when you 'cheat'. Well, not so much cheat as treat the game as a learning exercise. Taking back moves which you later feel were mistakes that led to your downfall, swapping sides and saying to 'ChessGenius', "Go on then, you have a try with my pieces and position!" for a bit, and so on. Again, the aim is to stimulate the old grey matter and to learn, learn, learn. 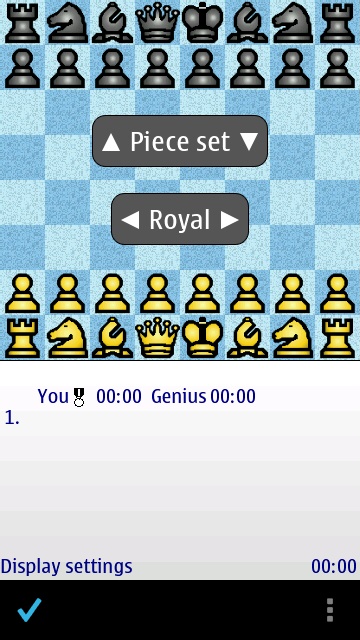 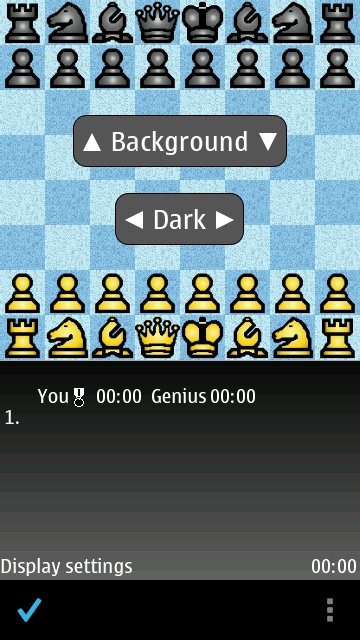 Which is not to say that ChessGenius's cosmetics have been totally ignored. There's a choice of several different board and piece styles, plus a sensible 'dark' mode for the main move notation window, which will help a lot with battery drain during long gaming sessions on AMOLED screens. Well done. 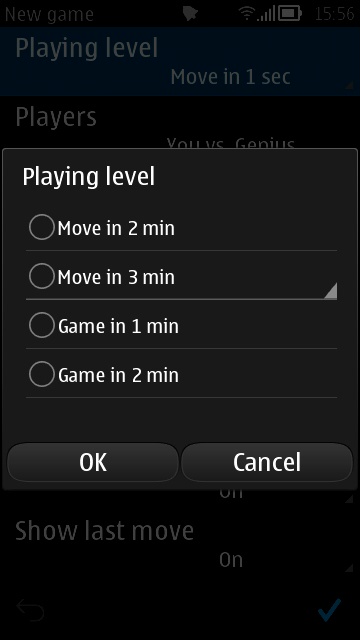 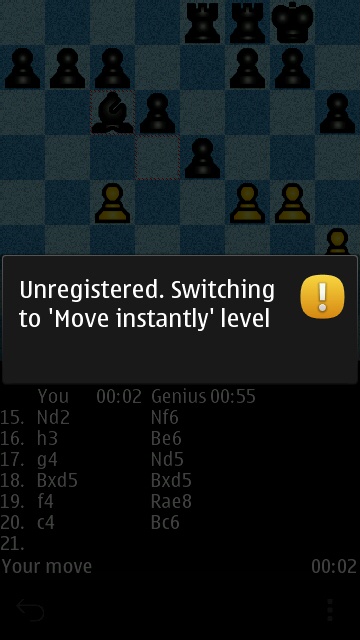 The other critical setting, of course, is how strong ChessGenius is. As mentioned earlier, there are a number of 'Easy' levels, designed with mistakes built in, simulating human players, and then we move on to the real meat and drink of the game - playing as well as it can. Although there are a number of timed games (where all your moves have to be completed withina certain time frame), a format common in chess clubs and competitions for obvious reasons, I prefer to consider chess a purely mental challenge and not to have time pressure at all. At least not when the game's running on my phone and the title doesn't have to be 'out of the hall by 10pm'... As a result, I felt happiest giving Chess Genius '5 seconds' per move. This was enough for it to give me a very strong game (I ended up losing every time) yet didn't involve too much waiting around at my end.

Interestingly, and as shown above, right, in the trial version of ChessGenius you get to play at the full range of levels, but after move 20 it reverts to instant moves, i.e. playing at a lower level - this is a very well pitched trial philosophy and ensures that the conversion from trial to full version comes at just the point where a player is really 'into' the game. 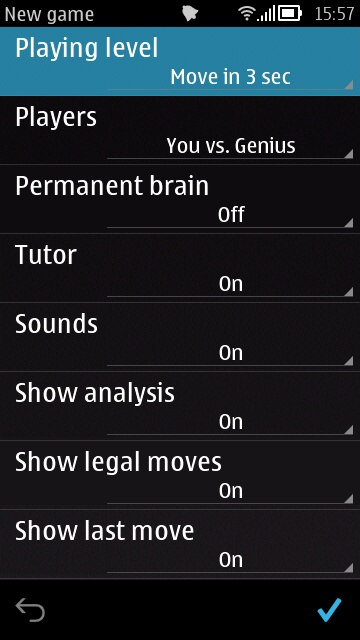 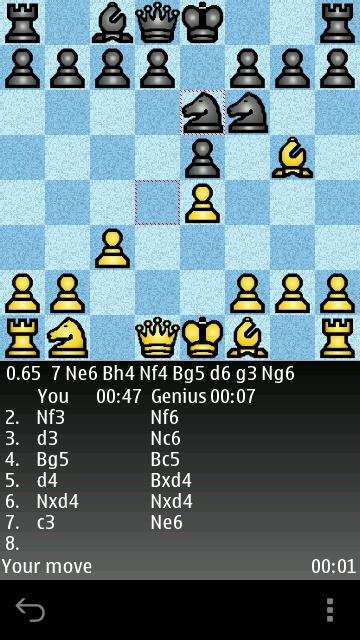 There are a wealth of playing options too. Most of the defaults are well thought out. 'Permanent brain' is an odd name, but refers to whether you let ChessGenius 'think' while you're doing your thinking time. Interesting, but you'd be upping its skill level enormously and also significantly increasing the processor load and thus affecting battery life. 'Tutor' is more helpful, spotting when the game thinks you've made a bad move and offering the chance to take it back automatically. Accepting this gratefully and then working out where you went wrong is at the heart of the learning experience here.

The 'Analysis' option shows animated lines of thinking below the main board - obviously the millions of possible moves that ChessGenius is considering can't be represented here, but the strongest lines are. In the screenshot, above right, the analysis shows (if I understand it right) that the game thinks it is 0.65 'pawns' up, and that the strongest line of analysis it can find is 7 moves ahead, with those moves shown. When you think about it, this is pretty cool, to be able to, quite literally, see into the mind of your opponent. 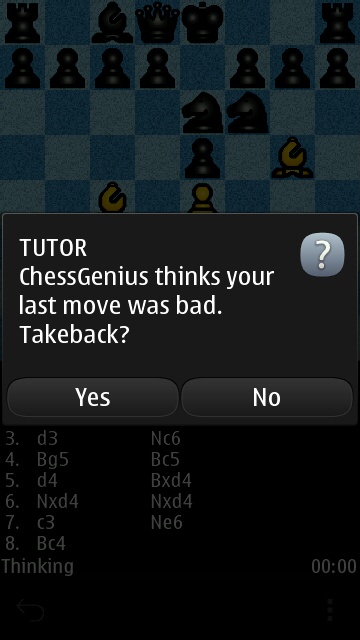 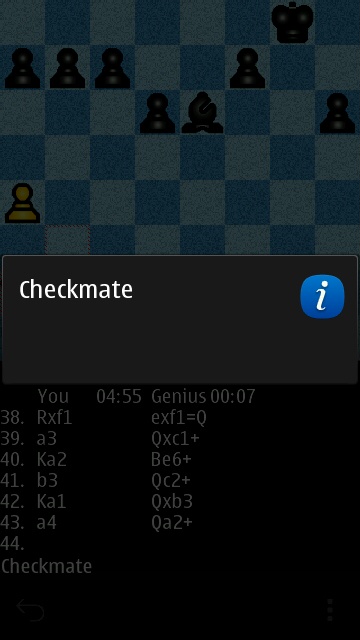 It's hard to go into every single feature of ChessGenius in a humble review. Suffice it to say that its maturity shows. In spades. Of special interest is that you can save games in the standard PGN chess format, used by chess applications across the world. And Symbian old-timers will be delighted to see that the game works on everything from the oldest and smallest S60 3rd Edition phone to the newest Belle FP2 devices. Heck, there's even a screen mode optimised for the oddball Nokia E90!

There are two ways to get going with ChessGenius. One is simply to buy it, £6 in the Nokia Store - if you're into chess then don't hesitate. It's that good. And it means that you can re-install it in trivial fashion if you reset or replace your phone. If you'd still like to try it for free then that's here on the ChessGenius web site*. You can then buy it and receive an unlock code after you've given the developer your IMEI details (plus, should you change your phone in the future, new codes are supplied free of charge).

PS. If you're on your phone, in the Store, you can't just search for "Chess Genius", i.e. with a space. Nokia's Store backend isn't that clever. Search for it without a space and you're fine. Confusingly, there used to be a game called 'Chess Genius' from another developer, but this was withdrawn for trademark reasons.

* There have been some recent intermittent issues with the ChessGenius hosting server, if it appears hacked, then please note this backup copy of the main Symbian installer, ChessGenius_S60_v360.sis