Review: Tennis in the Face (iOS, Android AND Symbian)

Credit to 10tons for releasing their new smash (geddit?!) title on both iOS, Android and Symbian (still the three biggest mobile platforms by far in terms of active users, mind you) at more or less the same time. Whoever said Symbian never got the best games? The quirkily (but aptly) named Tennis in the Face sees you helping a disgraced tennis ace smashing balls around to try and knock over various opponents, all seemingly in the pay of the evil Explodz corporation. It's a physics-based game and has a number of similarities with the wildly successful Angry Birds, yet is at the same time completely different. See below for my illustrated walkthrough and verdict.

10tons may have branched out into other mobile platforms, but they're certainly Symbian masters and Tennis in the Face is almost flawless. After a dozen hours gameplay, I only found one tiny criticism - it does appear as though the graphics were prepared with higher-resolution mobile screens in mind and just occasionally something on-screen looked wrong, over-blocky in the way that something that's been downsampled can look.

And that's it. Everything else here is positive, extremely so. The premise, while containing some trajectory elements and while involving physical objects which interact in various ways with other objects in order to achieve a goal, both staples in Angry Birds, is original and very well implemented. 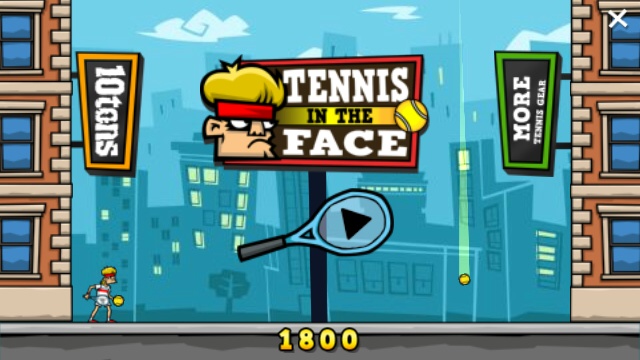 There's a zany back story which evolves as you play through the various levels, with you playing a big hitting ex-tennis star Pete Pagassi, taking revenge on the company, supporters and minions behing the 'explosive' energy drink Explodz. Your two main weapons are your tennis smash, firing balls at high speed, and using your racket to also lob cans of Explodz at various opponents (the cans explode, of course!) Along the way, you'll need to take advantage of the usual collection of walls, sliders, blocks of ice, barrels, and much more...

The story is well set by sequences of newspaper headlines, as you see here, for example: 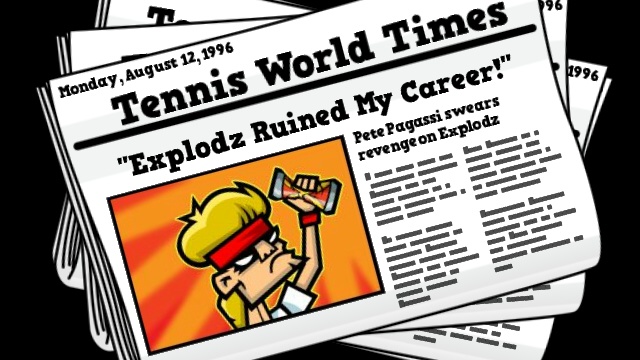 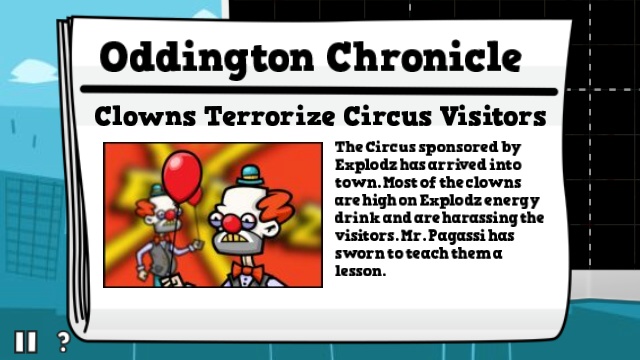 Each 'map tile' (group) of levels has a set of opponent characters, giving you an admittedly somewhat tenuous reason for disposing of them with your high velocity smashes (preferably 'in the face', since you get more points that way). After you've solved at least nine of the (up to fifteen) levels in each map tile, the door to the 'metro' opens up to the next map tile, and in this way you gradually work your way around the city, conquering all Explodz-powered characters you come up against. 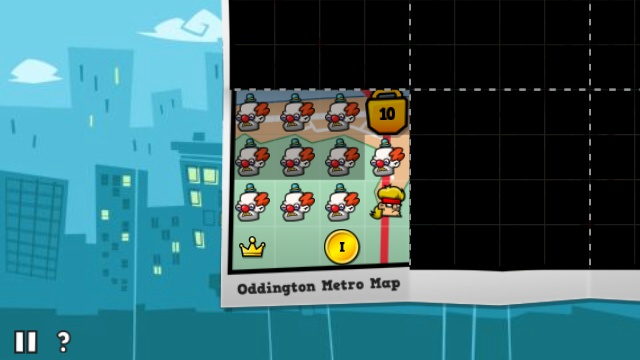 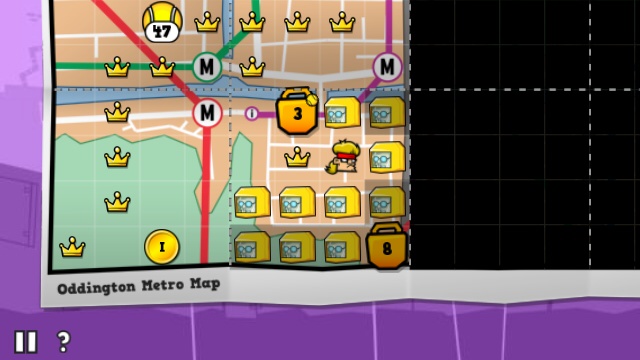 As you progress, if you conquer each level with the optimum number of balls (usually one, but sometimes two), you get given a crown - plus, you get to keep the spare balls (not used) - these are needed on later map tiles and levels, it seems (though I'm only up to map tile 4 of 16 as I write this!)

But enough set-up, let's get into Tennis in the Face, the game. Here's a typical screen. In this case overcoming Explodz-high clowns (see the newspaper shot above!) You take aim by drawing out an aiming line on-screen (don't worry, there are more screens below which will show this) and then your tennis smash shot hits its target and, if the latter was hard, you get a certain number of ricochets too. 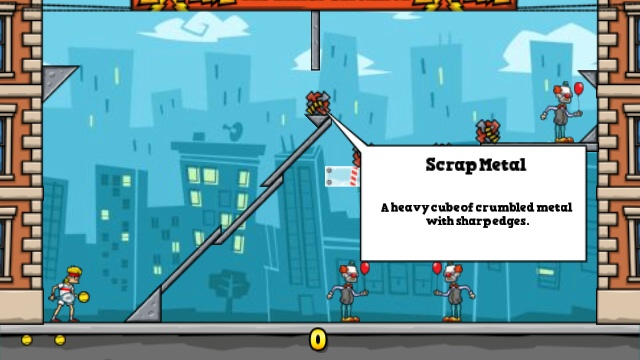 Points are scored according to how many opponents you hit during each serve, with the eponymous headshots giving more extra points and satisfaction(!) 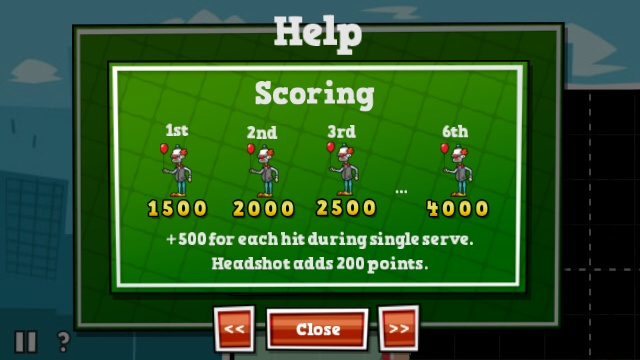 Each new character opponent is introduced carefully when you step into a new map tile: 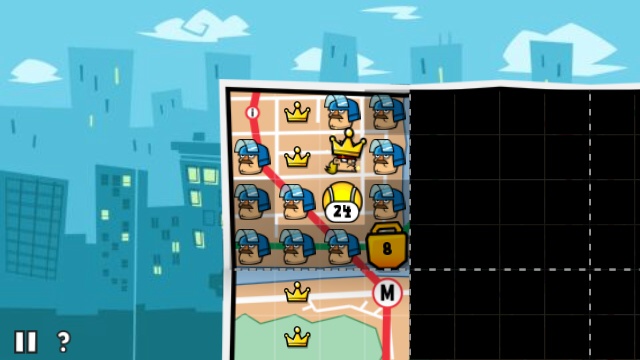 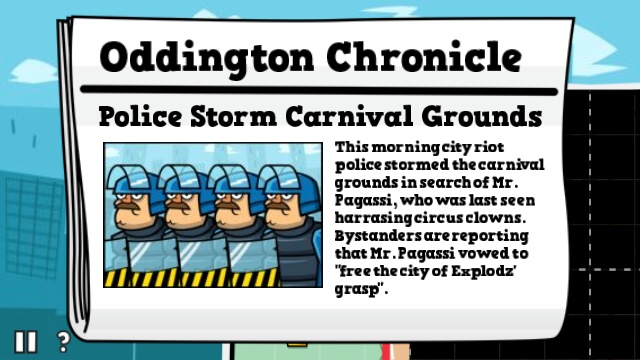 Having one tennis player, armed only with a few balls, fending off hundreds of riot police, is obviously somewhat insane, but go with it since Tennis in the Face is most definitely worth it. Different opponents can be defeated in different ways - for example the riot police can stand two hits from the front, but are more vulnerable from behind. In a later level (shown below), geeks in radiation suits need to be twice too, adding to the complication of what you might plan to happen on each shot. 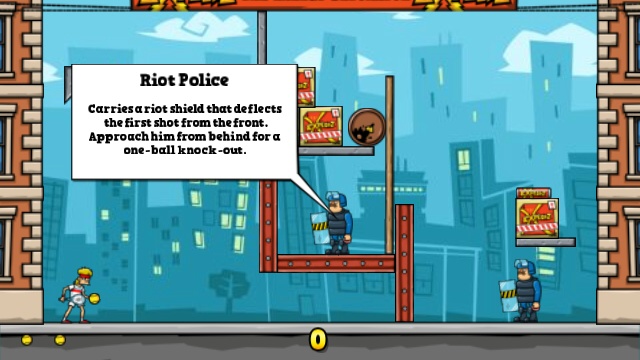 Looking at the level/screen above then, the secret is to smash the ball up into the angled block, with the ball then careering across to the crates of Explodz. This then 'explodes' (well, duh) and pushes the barrel and board over. Whacking the first policeman from behind and smashing down on the extra Explodz crate, which also then explodes, killing the second policeman. Easy! 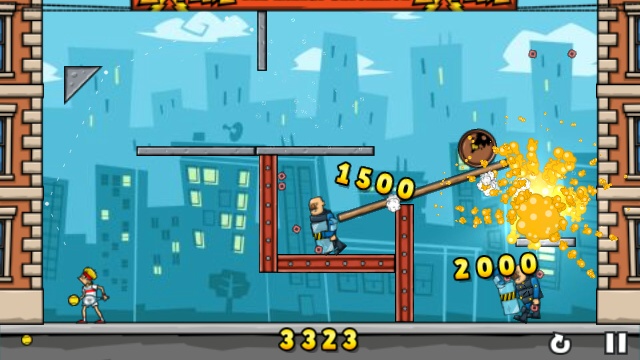 Gradually the difficulty levels rises throughout each map tile, with more opponents and more obstacles and features. Special mention should also be made of the audio side of Tennis in the Face. From ambient rock music for the menu screens to the in-level jams (different for each map tile) to cries of pain to explosions to ricochets, an awful lot of attention has gone into the sound design here. Credit to 10tons and their project team. 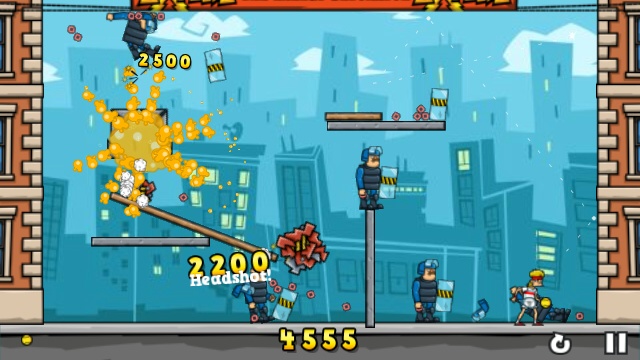 What would a modern game be without medals and achievements to win? There are various things to accomplish through the game, such as this one 'ServersThemRight', shown below, though it's purely to add interest. 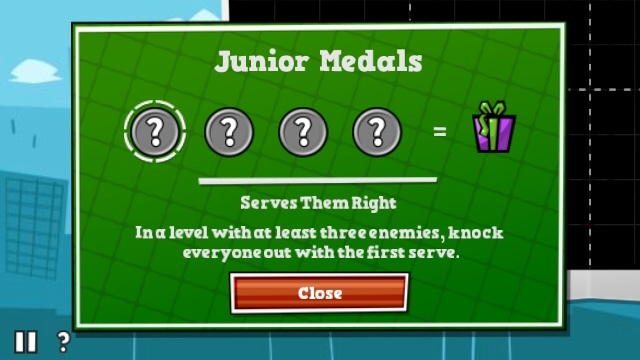 As, to an extent is your point score, since the only thing most players will be really interested in is progressing through every level and (hopefully) achieving the perfect number of balls/cans in each. Yes, I said cans, since in some levels you also get cans of Explodz to lob (note the trajectory, and that a 'lob' is a perfectly valid tennis stroke too): 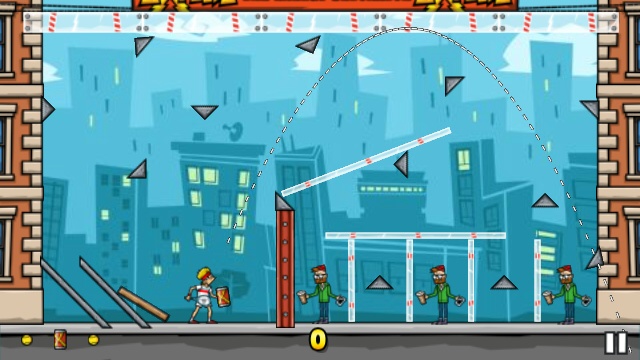 Let's finish by walking you through a typical two-ball level. Only one opponent in his radiation suit, but he's tricky to reach. You can't smash the ball of a nearby surface, so you have to work your way round the various mechanical elements on show - what is each there for, are any of them 'dummies'? And so forth. 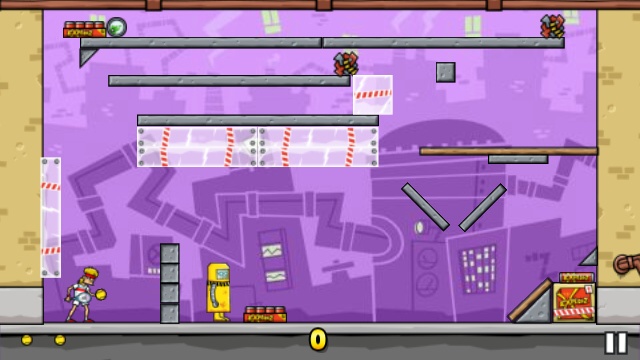 In this case, the solution is to set your smash aiming line to bounce the ball off the angled block directly above. The tennis ball then knocks the middle scrap metal cube onto the glass, which smashes and the cube then falls onto the wooden beam, which tips up, releasing an extra vertical channel on the extreme right. You then set your smash aiming line to hit the overhanging explosive Explodz pack, at the very top left: 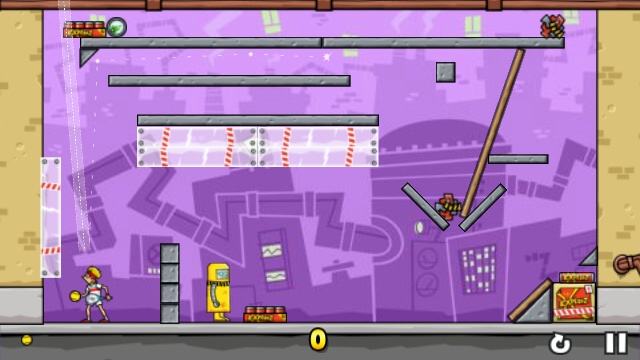 This then fires the large steel ball along the top shelf, knocking off the top-right scrap metal cube, which then falls onto the large Explodz crate at the bottom... 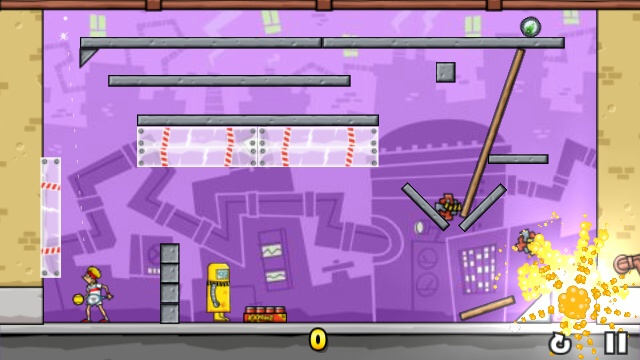 ... which then explodes in a major way, blasting the small plank of wood along the floor to impact the smaller Explodz pack, which then blasts the armoured opponent. Phew!

It's worth noting that you can fire off a ball while the previous one (and its effects) is (are) still in motion. Occasionally, you'll have to set something in motion and then fire your next ball at something else, timing things just right to blow up or move in the right way. In other words, there's not only aiming to worry about, there's also timing.

The gameplay in Tennis in your Face isn't totally new, of course, but it's innovatively presented and packaged and feels fresh. I have to confess that I'm not normally a huge arcade puzzle fan, but the charm of the story and graphics, the dynamic nature of many of the levels, the fairly gentle difficulty curve and the sheer audio ambience, all hooked me in and I found myself playing far further than I had intended to. Which bodes well for the title's success in the game marketplace.

It's great to see that Symbian game pioneers 10tons haven't abandoned the platform that gave them success in the first place. And it's great to see such a top tier title appearing on what is still one of the biggest mobile platforms, even if the tech media seems to nowbe largely ignoring it.

Well done all round. In the meantime, don't hesitate to buy Tennis in your Face for your Symbian smartphone - I guarantee this will be the best £1.50 you've spent so far in 2013.