(This was a preview of the prototype. You can now read our review of the final production model by clicking here.)

The Nokia 6290, which was announced at Nokia Capital Markets day (part of the Nokia World event), is a mid tier clamshell S60 on Symbian OS phone. Feature wise the 6290 boasts WCDMA (3G) and quad-band GSM connectivity, a 2.0 megapixel camera, FM Radio, stereo speakers and dual screens. At 94 x 50 x 20.8 mm and a volume of 88 cc the 6290 is at the smaller end of the smartphone scale. It matches the size of many competing clamshells while retaining the power of a smartphone and from this point of view it is an impressive achievement. 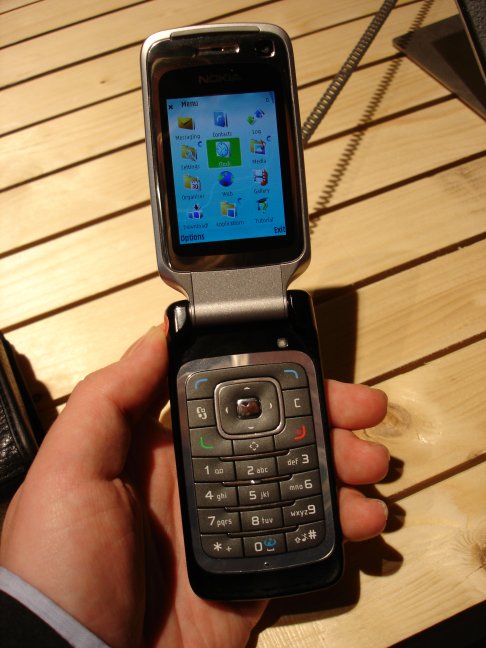 The 6290 has classic clamshell styling, a roughly rectangular shape, but with rounded edges and a slightly tapered bottom. It is comfortable to hold in either closed or open mode, and is not unpleasant to look at. However in its overall styling the 6290 does not particularly stand out, it is not a phone for the fashion conscious and I'm sure many will see it is as a little boring, but there is a big market out there for this type of phone. Overall the build quality is excellent, the clamshell mechanism feels reassuringly solid, although some may be disappointed by the lack of a sprung hinge. The keypad is good; all the keys are reasonably large and give good tactile feedback. It is a simple keypad design, but it is very effective. It is particularly good that none of the control keys feels cramped, something that has let down earlier devices. The 6290 has a multimedia key, a first for a non Nseries device, which perhaps reflects the multimedia aspirations of this handset.

Long term S60 users may notice the absence of the pencil key; the 6290 is the first device to do away with this key. The functions previously assigned to the pencil key such as multi-select in lists, and access to copy and paste are now principally taken over by the # key. This works well and demonstrates the pencil key was largely redundant.

The internal screen is 2.2 inches in size and uses the now standard QVGA resolution. A small light sensor is found on the top right of the keyboard and this adjusts the brightness of the screen accordingly. The 6290 continues Nokia's track record of excellent screens, it is both bright and easy to read. There is a small VGA camera on the top right of the screen which is used for making video calls.

The front of the device houses both the cover screen, with three accompanying softkey buttons, the housing for the 2.0 megapixels camera and the LED flash. This screen, at 1.36 inches and a resolution of 128 x 160, does a good job of showing the necessary information. On the left of the device are the microSD memory card slot (which adds to the generous 50MB of internal flash memory) and a dedicated 'push to talk' button, together with the first of the two stereo speakers. The right hand side of the device house the volume up and down buttons, the IrDA port and the USB port. The USB port is the standard mini USB type rather than Nokia's proprietary Pop-port. On the top of the device is the power charging socket and a standard 2.5mm smartphone audio jack (4-way, for music plus voice comms over a hands-free).

Thanks to a good cover UI, the 6290 is able to take full advantage of the external screen. All the basic functionality (incoming caller ID, status, alerts and messages) is available. The cover UI is the same as that used in the N75 (minus the camera aspects) which in turn is a refinement of that used in the Nokia N71.

One very welcome cover UI function is the access to music and Music player. The cover UI enables you to access the music library and play lists and control the basic functions of the player. For example, when playing music, the three control keys allow the pausing/playing of music and the skipping backward and forwards through a play list. This gives the device a strong music focus. If you couple the 6290 with a large memory card then it becomes a capable music player. The quality of the audio playback through headphones is excellent (much better than the iPod). As you would expect, playback through the stereo speakers is tinny, but for hotel room music should suffice. I think this device might have an unexpected appeal to the iPod generation and may be the generic first mid tier smartphone that encourages wider uptake of converged device usage. 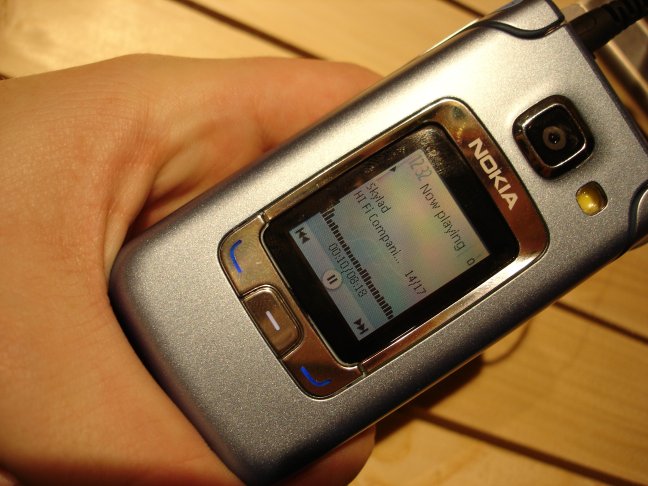 Outside of music playback, the 6290 is a capable multimedia smartphone with a camera and FM radio. The camera doesn't match that found on high end devices like the N73 or N93, but does produce good results in comparison to many of the feature phones the 6290 will be competing against.

In terms of software, the 6290 runs S60 3rd Edition Feature Pack 1 on Symbian OS. Standard features of the platform include stereo audio over Bluetooth (A2DP), Flash Lite 2.0, version 2 of the S60 browser (which integrates Web and WAP browsing into a single program) and a few user interface tweaks. The most notable of these are the addition of an open program indicator in the application screen (open programs have a dot next to their icon) and support for a number of additional application screen layouts. The 6290 also ships with a new game, Eclipse, which is a cross between Breakout and the numerous coloured balls/tiles/gems-matching style of games. The usual Microsoft Office and PDF viewers are also present, as are all the usual S60 applications.

The phone officially supports a number of push email systems and will ship with software that will help consumers set up email on their phone more easily. This is likely to be part of the 'Getting Started' or 'Welcome' application, which combines some of the helper applications from previous S60 phones, such as the Settings wizards, Tour and Transfer under a single application icon. This should work well and having all of the initial phone set up and phone transfer functionality in a single location makes a lot of sense, should ease setup headaches and chimes in with the overall impression of simplicity.

In their press release Nokia did talk up the simplicity of the 6290. At first glance, beyond a few software tweaks, there is not much to suggest this. The 6290 runs the normal S60 platform which at time can feel a little ponderous and intimidating to the newcomer. However, the hardware design does suggest a subjective feeling of simplicity and this gives the 6290 something of an edge over most smartphones in this department.

The 6290 comes from Nokia's Mobile Phone division, as opposed to the Eseries phones (Enterprise) and Nseries (Multimedia) phones. As such, it is part of a wider trend that has seen S60 move onto mass market phones. The 6290 is interesting because it is the first generic mid tier S60 phone from Nokia. Nokia's other mid tier S60 phones - the 5500, 3250 and E50 all appeal to specific niches - sports, music and enterprise respectively, whereas the 6290, despite strong music credentials, is more of an all rounder than anything else. 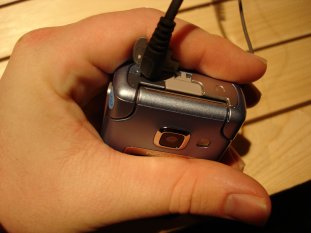 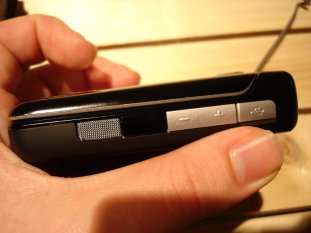 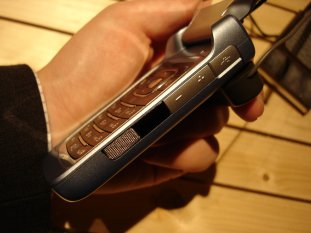 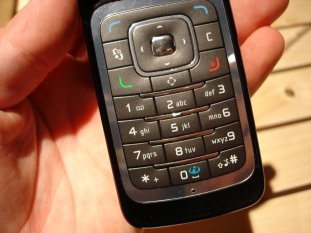 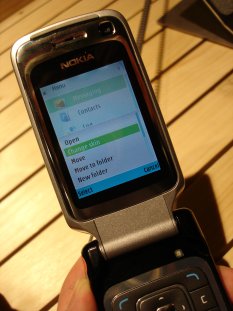 The successes of S60 clamshells has thus far been limited, which given the form factor's popularity in certain markets is something of a surprise. The N75, a petite clamshell Nseries, which Nokia announced in October, goes some way to address this, but the N75 is currently intended solely for the US market. The Nokia N90 and N93 might also technically be considered clamshells, but are best seen in their own unique transformer form factor segment. Nokia's two previous clamshell form factor S60 phones, the Nokia 6260 and the Nokia N71, were technically competent, but rather outsized compared to their rivals. Moreover the 6260 suffered from design and build quality issues, while the N71, despite an innovative cover UI, suffered in comparison to its more glamorous Nseries siblings. Panasonic's defunct X700 and X800 S60 phones were the only viable choice for an S60 user wanting a small clamshell phone, but they weren't widely available and thus didn't fulfil their market potential. Samsung have produced a range of clamshell S60 phones, including the recently announced Samsung i520, but none of these have made it to consumer market in significant numbers.

While the 6290 does not have all the features of a high end Nseries device and is not going to generate much excitement in power user circles, it does offer a lot in a small package. The 6290 offers a lot to the smartphone aficionado; it runs the latest version on the S60 software platform, has solid technical specifications and an attractive design. It does not have quite the stylish feel of other clamshells and I personally prefer the design of the Nokia N75, but the rounded pebble-style clamshell design is an old favourite for many. Thanks to its form factor, its general feel of simplicity and its mid-tier pricing (around €300 unlocked and SIM-free) the Nokia 6290 should also attract consumers who have thus far shunned high end smartphone devices as too big, too complex and too expensive.