A year or so ago, you knew where you were with a Nokia S60 smartphone - it would be about a certain size and be a 'candy bar', with later models even foregoing a wacky keypad design. Since then, we've had the 'transforming' N90, the gullwing E70 and the thumb-keyboarded, wide-screened E61, to name but three. The N71, then, doesn't come as so much of a shock.

I was going to write about this being Nokia's first S60 clamshell device, but then I remembered the 6260. And the N90 itself, each of which could be configured in clamshell mode. But this is a true clamshell, in that it can only be used in this one form factor. As with other clamshells, there's the advantage of more screen and keypad real estate, and a better position during calls, at the expense of slightly greater thickness and (probably) fragility.

First impressions of the N71 are good, the phone is certainly diminutive, measuring only 94mm long, including the bulky hinge, and weighing just 133g. It's nicely constructed in black and silver plastic and the hinge seems sturdy. There's no sprung flip action here, you'll need two hands to open the clamshell, which may be a problem for some people - single handed use is one advantage of the traditional candy bar design. Opening the device is enough to auto-answer an incoming call, an expected but still nice to have feature. 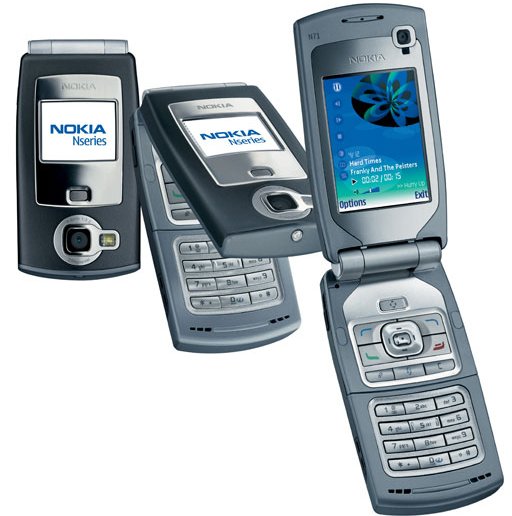 Before opening the N71, you'll have noticed the one large external button and a small 96x68 pixel cover display. The latter is in colour and displays simple graphics and text to indicate system messages (e.g. missed calls), device status, any currently playing music track (with pause/play assigned to the button) and, with a long push of the button, a backlit clock and date. The cover user interface is simple and effective. There's also a tiny (and annoyingly easy to push by mistake) PushToTalk button on the left of the N71, next to its infrared window, should your network support PTT, and the required (and getting ever smaller and more fiddly) power/profile button, here located on the very end of the device.

One reason for the clean lines of the N71 is that the power socket, Pop-port connector and miniSD expansion slot are all hidden away underneath the main hinge. Packing so much electronics into a few mm of plastic is an impressive feat of miniaturisation, but it does make removing the connectivity cable and extracting a miniSD card somewhat fiddlier than usual. The Pop-port is protected by a rubber cover. On balance this is a good idea, although it's not tethered and power users (who connect up often) will probably end up losing the cover, either by accident or 'on purpose'.

Open the clamshell (it tends to 'click' open at 135 and 155 degrees) and you'll see a slightly larger than usual S60 display, framed in a stylish metal surround. The colours are excellent and the text clearer than usual because of the screen resolution used. This is one of the new (to Nokia) QVGA screens and it makes a big difference. Opposite the display is a spacious keypad, although the narrow and clicky number keys and pimpled navigator take a little getting used to. There's also the mental leap to make, associating the two soft keys on the bottom half of the clamshell with the legends shown on screen a good 3cm above.

Above the main screen is the VGA video call camera, plus a light sensor for adjusting screen brightness and keypad backlight. The main camera is the same unit as in the established N70 and you'll have seen it in the photos on the front of the N71, beneath the cover display. There's no protection from knocks, scratches or fingerprints, unfortunately, especially important given the number of times you're going to be pressing up against the lens in the course of pressing the clock button.

Booting up the N71 reveals S60 3rd Edition, as seen on most other smartphones reviewed recently. The interface and applications look good on the QVGA screen in the N71's and there's less sense of wrong fonts and layout than on the landscape-oriented E61. I'm guessing that QVGA-portrait was fairly central in the 3rd Edition redesign and it shows. Yes, there are still several different fonts in use, but nothing leaps out as horribly out of place. 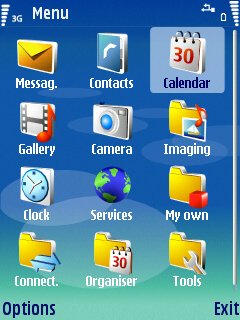 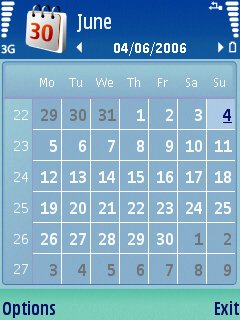 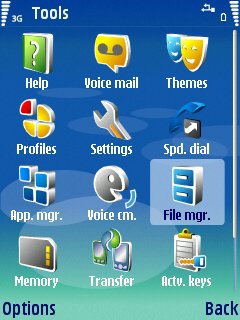 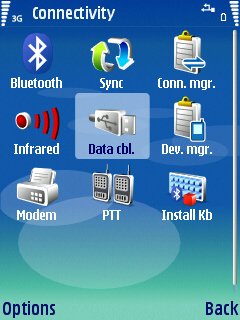 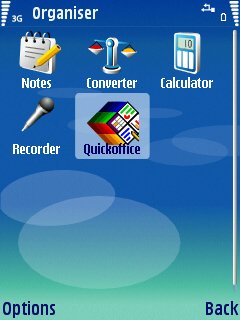 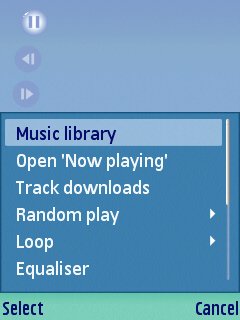 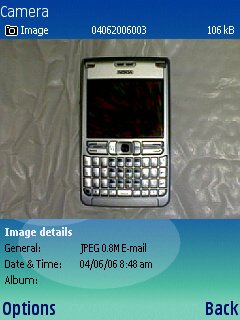 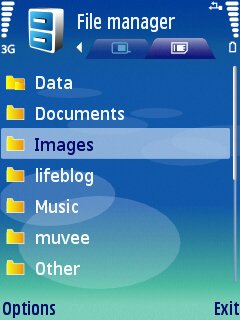 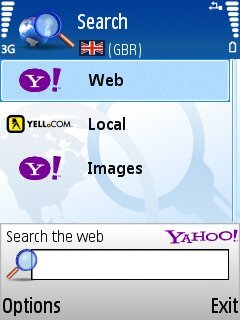 One enhancement which is new is a revised function for the multimedia key. On the S60 2nd Edition N70, this just launches the application of your choice (by default, Gallery), on the N71 it brings up a five way navigator-led shortcut, as shown below. I was worried that it now took two keypresses to get to the centrally shown application, but one long press on the button bypasses the new shortcut screen and 'does the right thing'. 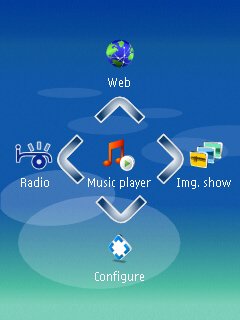 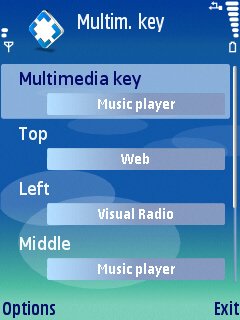 Music player works as well here as any any other recent Symbian OS-powered smartphone, with only very occasional background drop-outs when starting a particular demanding application. Production N71s are apparently supplied with the Nokia headset with integral 3.5mm jack, for plugging in your own higher quality headphones, though the set supplied in the box are adequate for all but audiophiles. As with other S60 3rd Edition devices, there's full Media Player synchronisation and WMA support (plus USB mass transfer mode, all at high USB 2.0 speeds). As with the N70,and fast becoming commonplace on Nokia S60 smartphones, there's a stereo FM radio too, although reception isn't that sensitive. 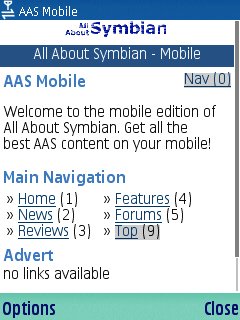 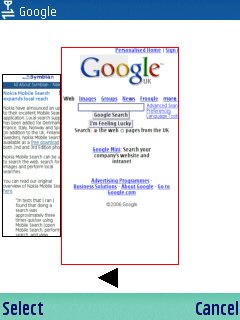 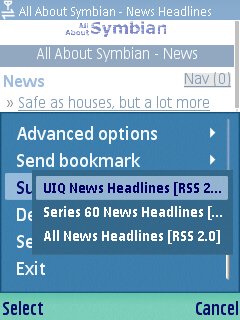 Web on the N71 is Nokia's Open Source browser, with some of the same issues as we've previously reported, in terms of trying too hard to lay complex pages out as on a desktop, but at least with the slightly higher screen resolution here the problem's not so acute as on (for example) the N91. For some reason, I couldn't get GPRS working on the review machine (even after a hard reset) - there is a degree of automatic set up in modern S60 devices, based on the SIM that's inserted, but the settings seem to centre on contract SIMs rather than pre-pay ones. The N71 worked fine with Rafe's contract card, with screens shown above for general web browsing and text-based RSS feed reading. 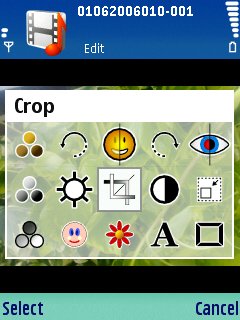 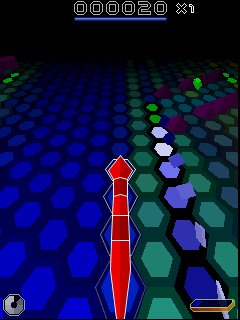 With extra screen real estate to spare, the interface to the still and video camera has been tweaked for the good, with light and flash settings available underneath the preview image rather than being a pop-up. Image quality is on a par with the quality 2 megapixel output from the N70, with TV-useable video capture (352x288 pixels, 15fps). There's the same intelligent use of digital zoom, too, with the software not letting you go past 2x zoom by default and with warnings in the manual about overriding this setting and using higher zoom factors (with appropriate reductions in quality). Image editing (from Gallery) has been improved (compared to the S60 2nd Edition Nseries devices), with effects such as 'Red eye reduction' and 'Cartoonise', although image processing on the smartphone is still far more restrictive than doing the same back on your desktop.

There are no surprises on the software front - the viewer component of Quickoffice is provided for displaying email attachments, the terrific Snakes game is in the ROM, as is the latest version of Nokia's Mobile Search utility. Curiously, there's a shortcut to downloading and installing F-Secure's 'Anti-virus' software, which is strange since S60 3rd Edition, with its restrictions on unsigned applications, is immune to malware by definition.

As with all other S60 3rd Edition smartphones, I have to warn you that there's still an issue about availability of 3rd party applications (ported from S60 2nd Edition), but this will ease as time goes on.

Battery life on the N71 is excellent, with daily recharges not needed unless you're a heavy camera user. The snap-in battery pack in the rear of the device holds a pleasant surprise, in that it's simply a standard BL-5C (as used in a million other Nokia phones) encased in a special moulding. When the time comes to replace it, or if you simply want to carry an emergency spare, it's easy enough to snap it out and put the new one in.

The Nokia N71 may not stand out as an obvious star in Nokia's current (somewhat mouthwatering) S60 3rd Edition line up, but it has a unique form factor and a lot to recommend it.  For fans of the clamshell phone, to have 99% of the functionality of the best-selling N70 packed in, plus a larger screen and a cutting edge OS, the N71 is the one to get and I have no hesitation in recommending it. 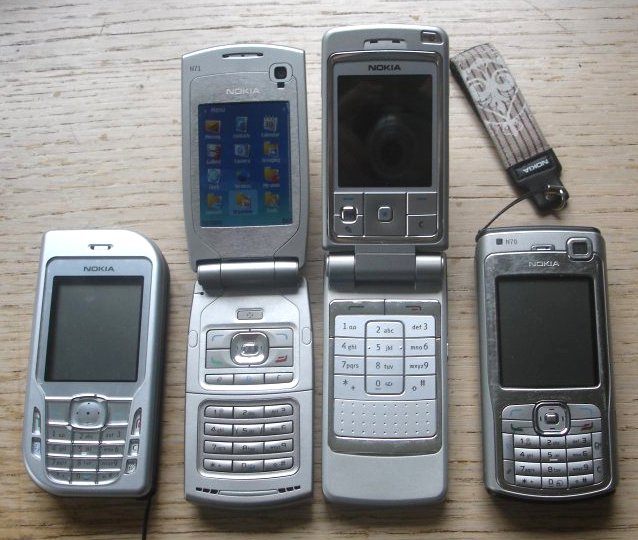