Symbian with the Linux desktop in 2011

Two years ago, I wrote about living with Linux and S60. Since then the world has moved further toward platform agnostic cloud services. This has made using Symbian Anna and Belle in a cross platform environment easier than ever. In this guide we’ll take a look at how to take advantage of the cloud and USB mass storage in conjunction with the Linux desktop.

When I wrote the original survival guide to Linux and S60, almost every step was dependent on using Symbian’s USB mass storage mode. Thanks to there being more online services, there are less activities that require a USB connection. That said - you cannot completely get away from the need to attach your smartphone as a removable drive. Hence our criticism of the omission of this feature from Windows Phone 7. 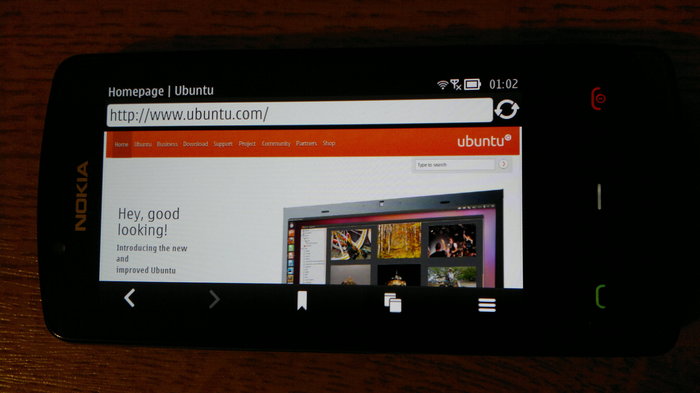 Two years ago, SyncML was my preferred method for synchronising my Personal Information Management (PIM) data; complemented by using IMAP for push email. These days, it’s hard not to recommend Mail for Exchange (MfE), which provides PIM synchronisation and push email. This protocol is mostly used in corporate environments, but Google offers MfE access to the public. Admittedly, I heavily use the Google ecosystem simply because it’s accessible on every operating system.

Symbian^3 saw the merger of the best features of Nseries and Eseries devices - including MfE. Unfortunately, Google’s MfE server does not support Google Tasks. If you require task sync with Google, I recommend that you subscribe to NuevaSync. It now supports Google Tasks and multiple Google Calendars. 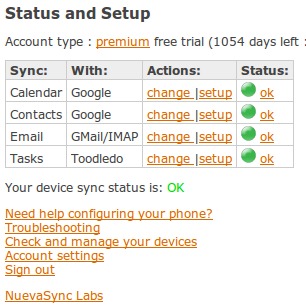 Fortunately, Symbian^3 still supports SyncML for those using older PIM services. I still reccommend Memotoo as the best SyncML service, thanks to its ease of backup and the range of third party services that it can synchronise with.

Given the choice, I’d suggest using MfE, as it effectively removes the need for backing up your data; it also makes migrating from device to device much easier.

Managing photos and videos captured by your device

Little has changed in terms of managing photos. Bulk file transfer is still best with USB transfer, and using open source photo managers like F-Spot are still the best options. Note that, F-Spot has since been replaced by Shotwell in the latest version of Ubuntu.

As stated in my guide two years ago:

PC Suite can import photos from your phone and organise them for you. Although, all that organisation is somewhat wasted when you consider that you probably want to integrate your phone’s photos into your general photo archive (if you’re reading this, I’m assuming you are that organised). In contrast, Ubuntu comes pre-installed with a photo organiser called F-Spot which will import photos from anywhere and file them into a central library (as will Google Picassa. It will also upload your photos to Flickr or whatever other photo sharing site you use. Furthermore, F-Spot embeds tags into your image files. In my experience of the Nokia E55, while you can tag photos, they aren’t stored in the image files, and are therefore lost when the files leave the phone. 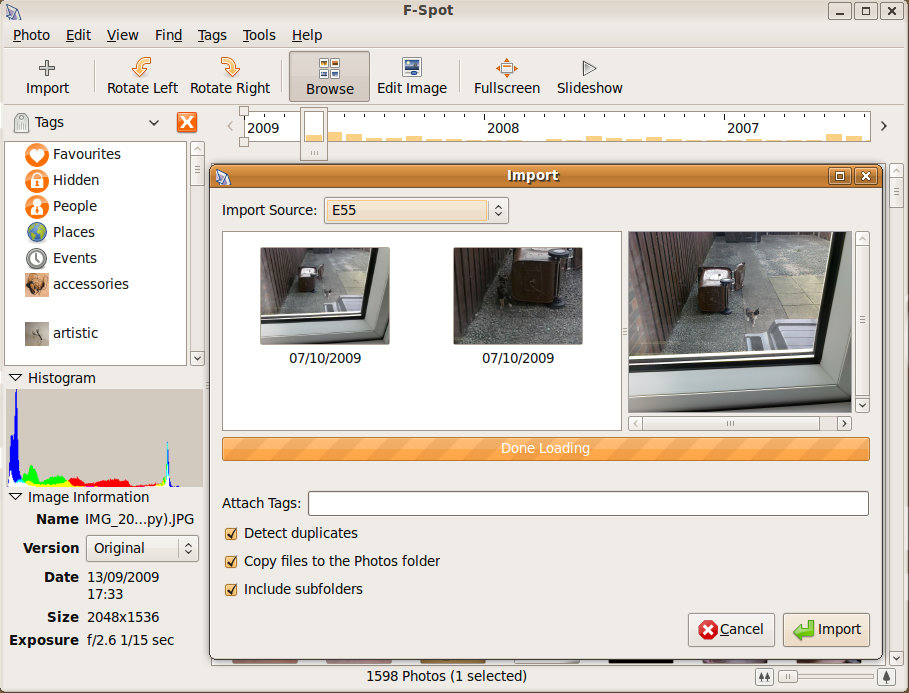 Importing your phone's photos with F-Spot.

Since I wrote the survival guide, I have found that my usage pattern has changed somewhat - I depend on Dropbox much more now. Cloud storage has enabled me to simply select a batch of files on my phone in cuteBox, and upload to Dropbox, which then automatically synchronises them to my laptop. This is best used for when you only have a few new photos to upload. If you have a large backlog of photos, or large videos, to archive, it’s still best to revert to USB file transfer.

Note that an alternative to Dropbox is SugarSync.

In my original guide, I suggested that RhythmBox, Ubuntu’s former default music player, was ideal because it recognised S60 devices as removable drives. However, this compatibility has since been broken with Symbian^3.

Fortunately, a new cross-platform music player called Clementine - built with Qt! - has been released. This works perfectly with any removable USB drives, including Symbian devices. 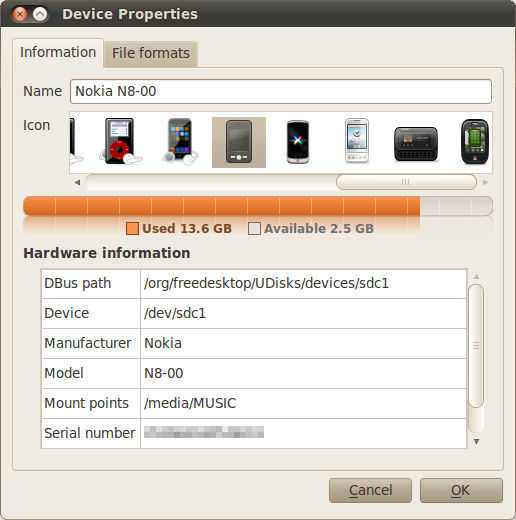 Connecting to the Nokia N8 via Clementine on the Ubuntu desktop

Thanks to Symbian^3’s superlative codec support, video conversion has become a thing of the past. Again, all you have to do is connect your phone in Mass Storage mode and copy your videos across.

If you only ever listen to podcasts on a phone, then there’s no need to involve your PC at all. Thanks to Sebastian Brannstrom’s Podcatcher, Symbian has a reliable podcatching application.

Recent versions of the Maps Suite now support downloading Maps via WiFi, rather than having to use the Windows based Nokia Suite.

Firmware updates have become far easier since over the air (OTA) updates were included as standard on all Symbian devices. The only time I have recently needed to use a Windows PC to fix a Symbian problem was to reinstall Qt libraries from the Qt SDK.

As I mentioned in the original guide, if you have a Windows DVD, and absolutely have to use Nokia Suite, e.g. to flash a firmware image, you can always try using a virtual machine.

Therefore, there is a last resort solution if you have a Windows OEM disk. Using VirtualBox, you can create a Windows virtual machine (VM) on your Linux desktop, at which point you have access to all the Nokia applications. Of course, you probably already have Windows, and the Ubuntu Live CD installer makes it easy to set up your computer to dual boot both. 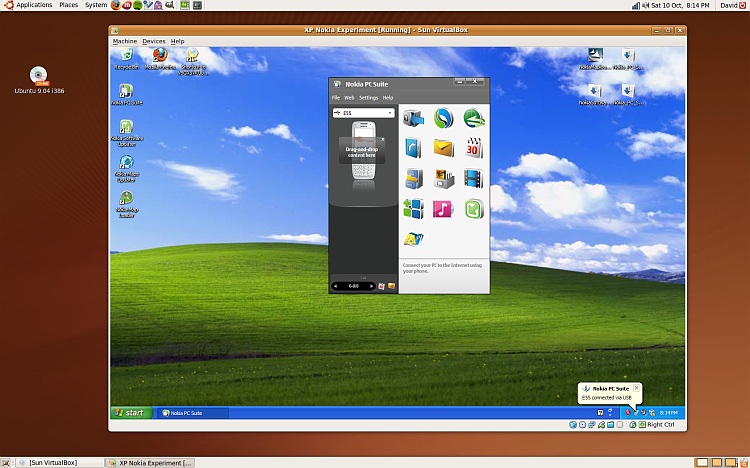 Windows XP running as a virtual machine in Ubuntu

Since my original guide, using Linux with Symbian devices has become easier. By using the cloud as an intermediary, things are more platform agnostic and integrated than ever. This is how technology should evolve - which is why I continue to bemoan Window Phone 7’s lack of USB mass storage.

Filed: Home > Features > Symbian with the Linux desktop in 2011

Platforms: General, Symbian^3
Categories: How To