I'm sure a lot of E71 and E72 owners are looking at the Nokia E6 as a possible upgrade, so it's worthwhile spending time highlighting the more important updates, as an addendum to our review series part 1 (hardware), part 2 (software), part 3 (enterprise) and part 4 (multimedia) on the device. What might you gain - and what might you lose - in upgrading to Nokia's latest qwerty slab smartphone?

The E6 runs on the same hardware family platform as the rest of Nokia's Symbian^3 devices. This is two generations on from the E72 (three from the E71) and has two consequences.

Firstly, all the basic specifications get a bump: faster processor, addition of a graphics co-processor, doubled RAM (128MB to 256MB), which means general operations are much faster - there's very little waiting around with the E6 compared to the E72. It also means the E6 can do things the E72 could not: cover flow in the Music player application, encoding and decoding of HD video, graphics intensive games, and more.

Secondly, there are additional hardware features. The most important of these is the pentaband 3G radio, a feature that is unique to Nokia and which means you can use 3G data worldwide. Also in this category is Bluetooth 3.0, USB On The Go (OTG), RDS for the FM radio, n-band WiFi, dual microphones (noise cancelling in calls) and improved sensors. 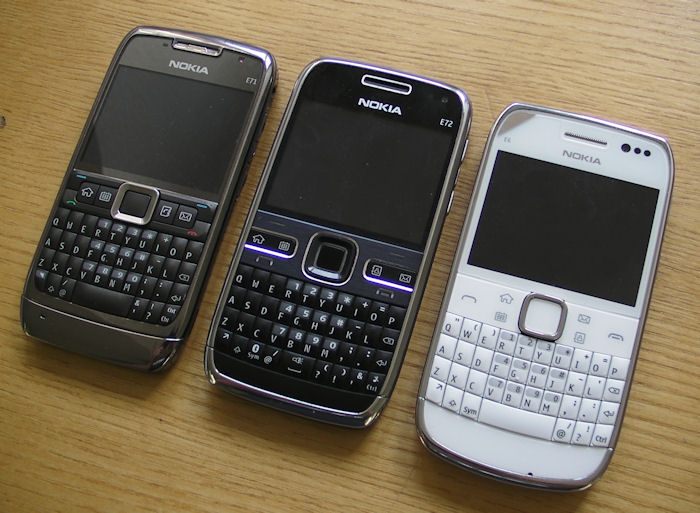 The E6's internal memory (C: drive) is increased by 100MB over the E72, but more importantly 8GB of mass storage (E: drive) memory is also included. That's in addition to the microSD card slot (F: drive), which now officially supports sizes up to 32GB.

Other notable hardware differences include the camera, improved keyboard (see details above) and the addition of a slider lock switch.  The camera switches to EDoF from auto-focus, which means the fiddly 't' keypress to autofocus (and optical d-pad contact on the E72) is no longer needed, making photo capture more straightforward. The use of EDof does mean macro shots are no longer possible, which means business card and receipt capture is less convenient. See the multimedia section of our E6 review for additional details.

The screen resolution of the E6 (640 x 480) is four times that of the E72 (320 x 240). This is best illustrated by the side by side screenshots below. Given the similar physical size, it's no surprise to find the pixel size (0.078mm) is much smaller on the E6 than on the E72 (0.15mm). This gives the screen a crisper look, making it easier to read text on screen, a critical factor for a messaging centric device. 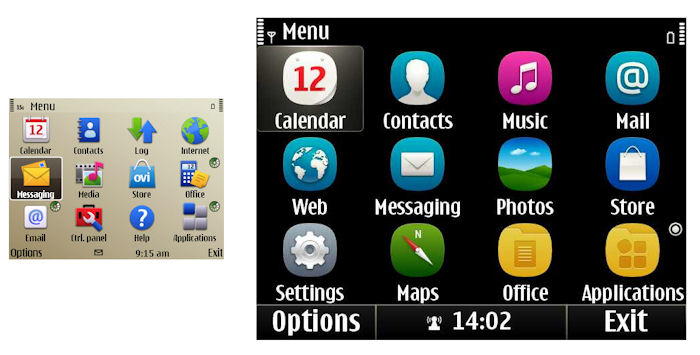 The E6 uses a transmissive LCD, as opposed to the E71 and E72's transflective technology. The latter is theoretically better in bright sunlight, but in practice the brighter display of the E6 and the higher pixel density more than offsets any difference. Indeed the E6 has the brightest screen we've seen on any mobile device, although it does lack some of the colour punch of AMOLED screens.

Thanks to a smaller bezel size, the E6 can accommodate a 2.46" screen compared to the 2.36" screen found on both the E71 and E72. It really is an impressive achievement to reduce the tolerances on the side of the device, given how important this area is to the overall structural integrity of the device. As a consequence, the E6's screen has an active area of 49.92 x 37.44mm, versus 48 x 36mm for the E72.

I talked in detail about the E6's keyboard in the hardware section of the E6 review and noted some improvements from the E71 and E72 (material, layout and individual doming islands). However, the biggest difference is the removal of the hardware keys for the on-screen softkey labels. This may seem like a big deal, but I found myself making a seamless transition in just a few days of usage and now don't even notice the difference (unless you go back to using the E72 and wonder why the touchscreen isn't working).

The E6 runs Symbian^3 Anna software, which, like the hardware family, is two generations on from the E72's S60 3rd Edition Feature Pack 2. As we've already noted, the underlying hardware brings very significant performance improvements and some additional software functionality. We discussed many of these in the software, enterprise and multimedia sections of the E6 review. For E71 and E72 users, the biggest improvements come in multimedia capabilities (improved video support, additional codec support and updated applications), but enterprise capabilities have also moved on with updates to Mail, Quickoffice and other productivity applications.

There are some application removals, the most important of which are Active Notes and Multiscanner. Some other applications lose small feature points (e.g. editing labels in Contacts), but are generally offset by far more significant gains elsewhere (e.g. Social Networking and Maps integration in Contacts).  As you might expect, the combination of the addition of touch and the move to Symbian^3 does bring visual and layout changes to the UI. The Symbian Anna icons are an obvious example, but there are also changes to the homescreen (customisable widgets, multiple pages), the addition of a touch toolbar to many applications and the introduction of touch-based kinetic scrolling.

The Ovi services see some of the biggest changes, especially comparing the two devices in their launch states. Ovi Store, Ovi Maps and Ovi Music have all matured over the last two years. It is important to note that many of the updates, from the last two years, are also available for the E72, but the Ovi service applications run much faster and more smoothly on the E6, thanks in part to the improved hardware.

The Symbian^3 Ovi Store client has additional features (e.g. application update support) and, because it is a more recent device, there are many more applications added for the E6 on a weekly basis than for the E72. Currently there are more applications available for the E72, but the E6 selection is more contemporary and up to date. The E6 runs the latest version of Ovi Maps (3.06) and is likely to get updates for at least the next 12 months. The E72 has an older version of Ovi Maps (3.04) and is unlikely to receive another major update. Both have free pedestrian and car navigation, but the overall experience is definitely superior on the E6. The differences for Ovi Music are smaller than for Maps, but the song purchase and download process is better integrated on the E6 than on the E72.

However, in general, the majority of changes are evolutionary, rather than revolutionary, and the onboard applications and their functionality will be familiar to users of the E71 and E72. The updates on the software side are substantial and performance is much improved, but they are also what you might expect to see, given that it has been two years since the E72 was announced.

Compare the E6 with the E72 (and E71) and you'll find, as shown in the comparison table above, numerous specification bumps in the hardware and the software. These are very much in line with what you might expect from two years of evolution. Some changes, such as the move to an EDoF camera, do need to be carefully considered by potential upgraders, but most bring obvious and welcome benefits.

Ultimately though, it is the addition of the touchscreen and the consequential move to Symbian^3 that make for the biggest differences. Symbian^3 brings additional features and better performance, while touch takes the E6 into a new device category. The end result is a device that will be instantly familiar to any E71 or E72 owner, but does not feel like it has been left behind by the touch trend and is a very worthy upgrade for any E71 or E72 user.