The new Sony Ericsson Xperia Arc has been long awaited by many in the Android community who wanted a challenger to the all-conquering Nokia N8 in the camera department. With its back-illuminated EXMOR R sensor, Sony Ericsson have been claiming extremely good low light performance. So, with the Arc in hand, I decided to put the two head to head for still photos under various conditions. 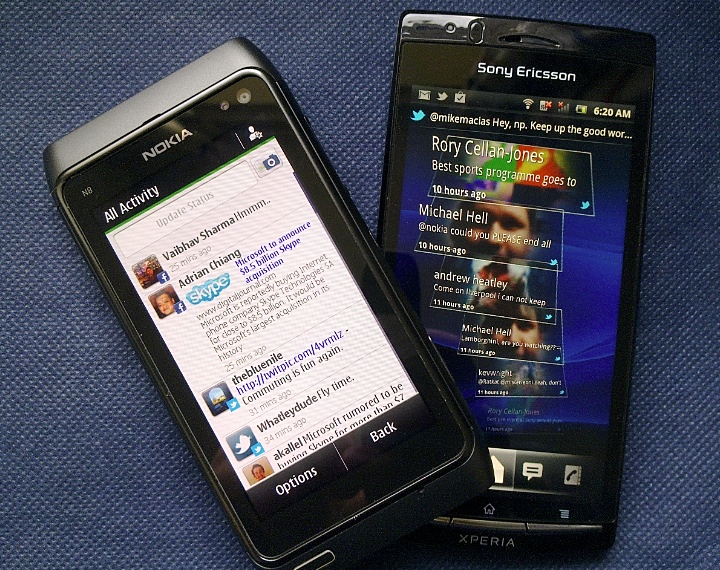 The Sony Ericsson Xperia Arc is a 4.2" screened Android 2.3 smartphone with generally similar modern specifications. See my imminent review in The Phones Show for a fully rounded chat about the device.

And then there's the Arc's camera. And trust me, it's a compliment that I'm daring to even think of putting the Xperia Arc up against the might of the Nokia N8 in the still photography stakes. In fact, it's the first non-Nokia phone that I've explicitly done this with, so the Arc is just about as good as it gets in the Android OS world.

No flash allowed, no artificial lights on, but a nice sunny day outside, one large window. Here's the full scene, zoom blurred for privacy, but just so you can see the degree to which I've cropped in for the comparison. 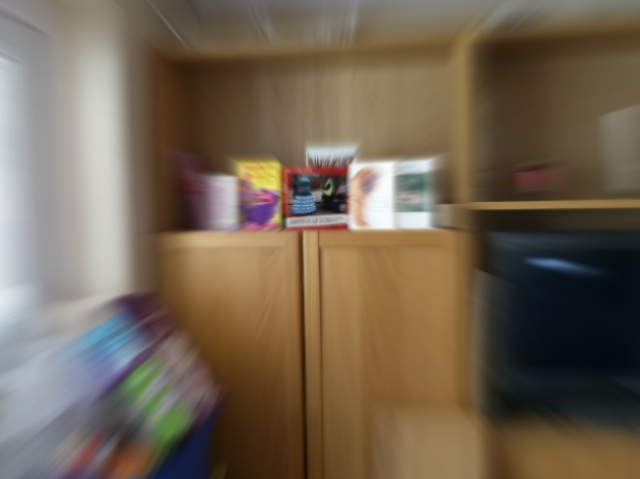 Now, having taken the scene with Nokia N8 and Sony Ericsson Xperia Arc, I brought up both photos at full resolution and cropped the central part so that we can easily see any differences in detail captured: 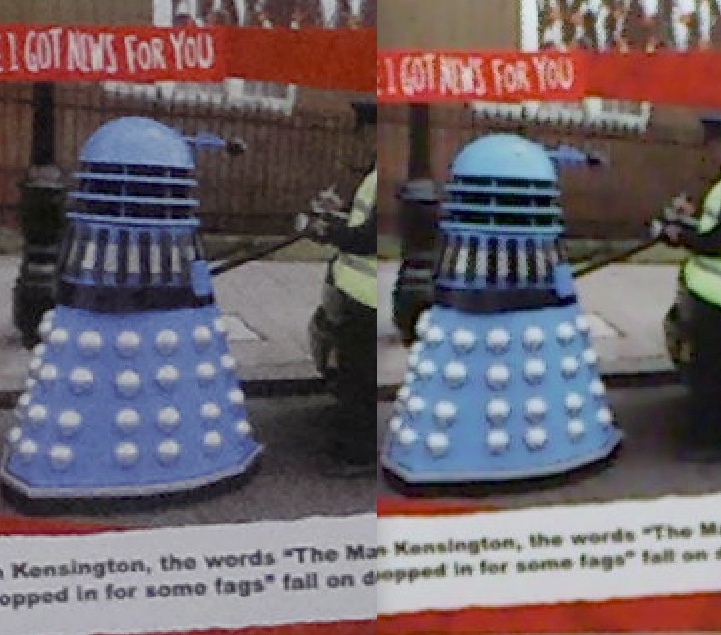 Now, obviously the Arc starts off with a slight disadvantage in that it maxes out at 8 megapixels, whereas the N8 gets to 12 megapixels. And indeed there's significantly more detail in the N8's version, as you can see in the text at the bottom. However, the handling of light and contrast doesn't seem miles apart: the N8's output is raw and noisy (on purpose), whereas the Arc's output is artificially smoothed (on purpose) - just different ways of handling sensor information.

Again, it's a compliment that the Arc's photo output is even in the same ballpark as the N8's.

The idea here is to test the raw sensitivity of the Xperia Arc's back-illuminated EXMOR R sensor, compared to the much larger sensor in the N8. To this end, I took a snap of a whiteboard in a family bedroom. The curtains were drawn, simulating a dim night club or outdoor evening level of illumination - essentially, every photon counts and there's precious little light to go around.

As before, I've zoom-blurred the photo for privacy reasons but wanted to show the context and degree of cropping/zooming that I'm using to compare the two shots: 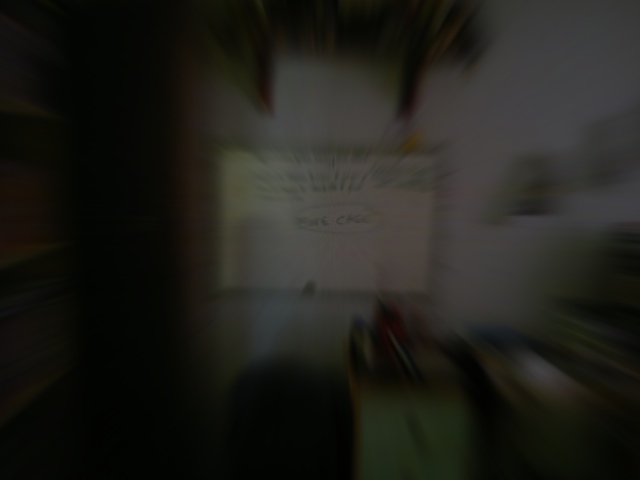 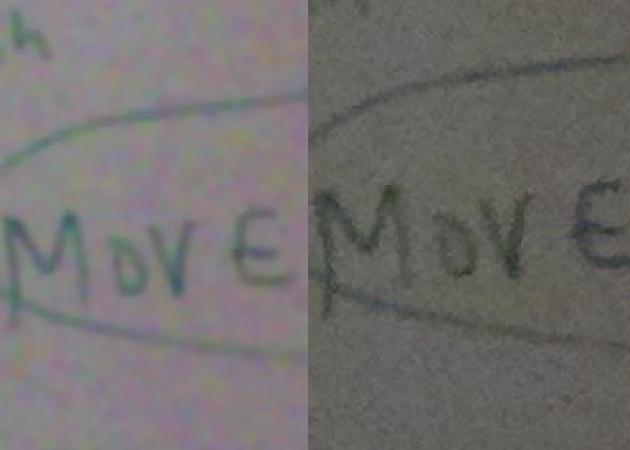 With the Xperia Arc fragment on the left this time, and the N8's on the right. Now, consider that the whiteboard itself is, well, white, so the text should be black (marker pen) on white.

The N8 image shows some digital noise, as you'd expect with very little ambient light, but you can see the pen strokes easily enough. The Arc's image appears lighter to the eye, but there's some aggressive noise reduction going on, resulting in larger artefacts and slightly unpleasant artificial colorations.

Again, the Arc gets within sight of the N8 but ultimately falls short.

Also known as the cringeworthy 'dad-dancing' shot around these parts. But hey, whatever it takes to simulate a typical evening out shot without embarrassing any other people 8-)

Again, I've zoom-blurred the photo for privacy reasons but wanted to show the context and degree of cropping/zooming that I'm using to compare the two shots: 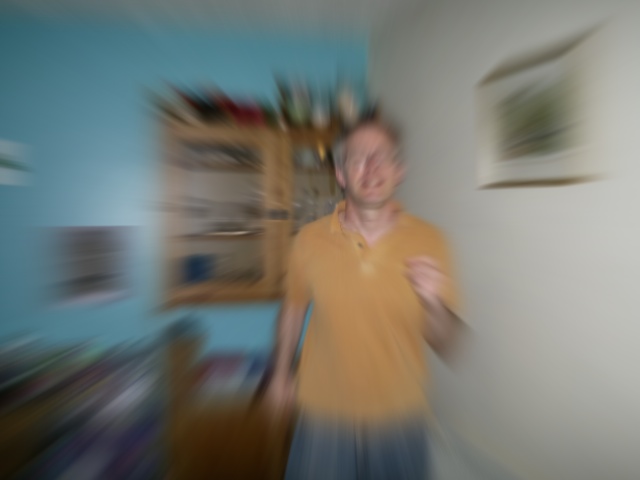 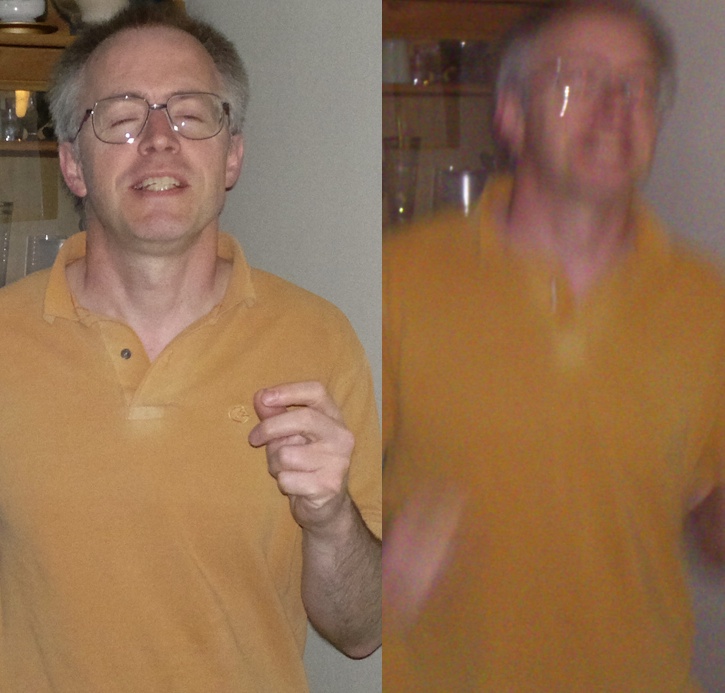 Nokia N8 on the left, obviously. In such a scene, where there's movement (either of the camera or, here, the subject), LED flash simply doesn't cut it. Every single LED-equipped camera phone falls on its face in pub/party environments. The Xenon flash of the N8 captures the action perfectly. Every time. The Arc's decent sensor did manage to produce a scene which looked well enough lit, but there's just way too much motion blurring from the slow shutter speed needed.

Here we're looking at adaptability to extremes of light, in this case harsh sun, keeping photos from 'blowing out' and while picking out details. The scene is a slice of my garden (I've taken a strip from a full 4:3 photo in each case), with the sun quite high in the sky and off to the left. The guinea pig hutch in the medium foreground provides some texture and detail, as do the greenery in the background and the grass in the foreground.

Nokia N8's image on the left, Arc's on the right. What's most evident here is that the N8's Neutral Density filter makes sure that (bright) extremes of light don't overload the camera sensor - whereas the Xperia Arc's sensor simply gets blown away because the sun's out - which isn't a very good start for its use in sunnier climates than the UK, to be honest - this was merely May - what would happen in mid-summer sun in Texas, for example? Look at the grass in the foreground (and beyond the hutch) - you can see the green blades in the N8 photo, whereas the Arc's image just has an expanse of white noise.

Is it possible that in optimising the Arc's sensor for low light, Sony Ericsson has compromised performance in the sun? In addition, the Arc's EXMOR R sensor makes a mess of the wood in the hutch (and of the tree branches in the background, top of the photo fragment), making it appear slightly reddish - the N8 nails the actual (very faded) colour of the wood.

Disappointing, to be honest, I'd expected a lot more from a top-spec camera phone in 2011. The N8's photo is simply miles better in every way.

The archetypal flower shot, beloved of camera phone reviewers! Except I've made it harder by choosing a small flower amidst masses of other detail. Here's the full shot: 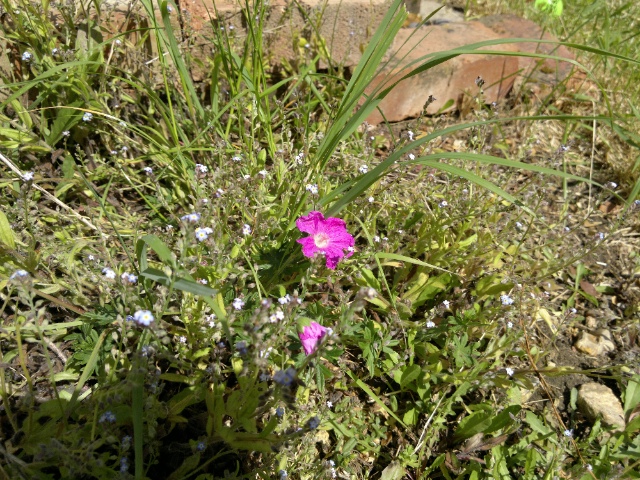 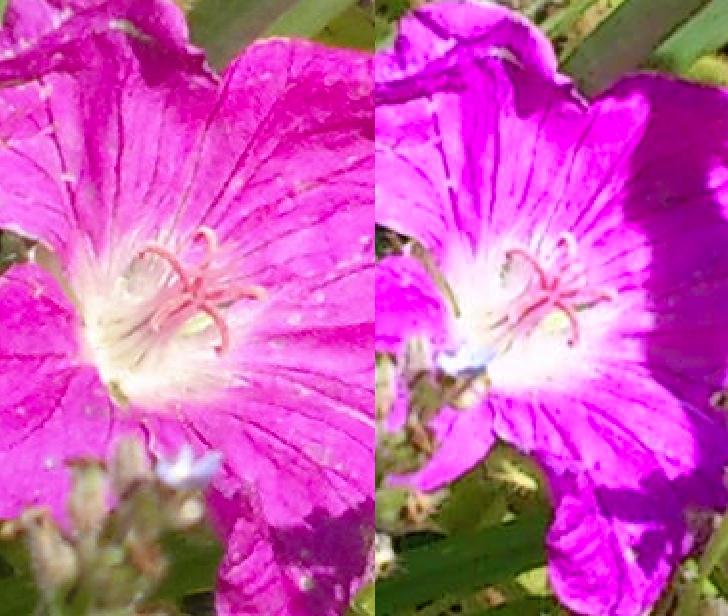 Nokia N8 on the left, Arc on the right. The Arc does pretty darned well, to be honest, but the bright areas are just a little overblown (again) and ultimately the 8 megapixel resolution can't match the N8's twelve - just look at the detail inside the flower - and remember that this is of a tiny flower at almost a metre's distance. 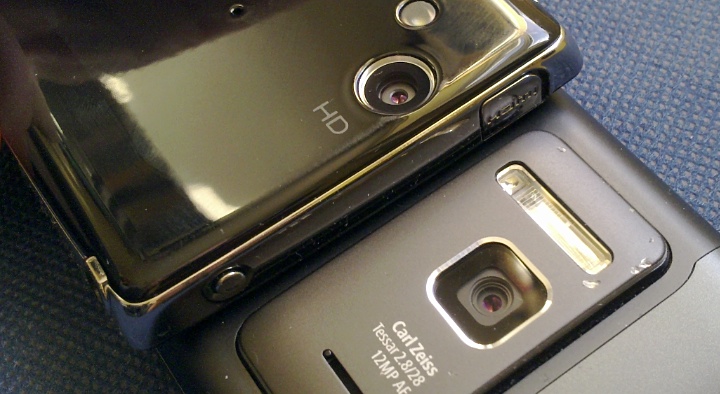 Taken as overall smartphones, there are plenty of pros and cons of the Xperia Arc versus the Nokia N8, of course. But the Xperia Arc is marketed as being camera (and media) centric, so it's the camera capabilities that attract an awful lot of attention.

The Xperia Arc, as you saw above, pales in many of the tests next to the Nokia N8. But then every other camera-toting smartphone in the world does too. So the Arc isn't alone. Overall, I'd rate its camera as close to that of the LG Optimus 2X, which I've also reviewed recently. Better than the Optimus 2X camera in low light, which is the Arc's strength, worse than the 2X in very bright light.

The Arc's camera interface is unique to Sony Ericsson and far quicker and more intuitive that the appalling mess in the N8, which still has the 'old' S60 5th Edition bodge. But as many N8 owners have found across the world, when your photos keep on coming out so well (from pitch dark right up to the very brightest sun), it's even possible to forgive a clumsy camera UI.

Will the wider smartphone world ever come up with a serious challenger to the 2010 Nokia N8 in the camera department? One day, I'm sure. But from what I've seen here, that day is still some way off - whatever Sony Ericsson's marketing team may say.

Steve Litchfield, All About Symbian, 10 April 2011