In perhaps the most 'current' Pimping piece yet, I tackle the Nokia 808 PureView, still a lot of people's main device, perhaps based on the super flexibility, the great camera, the gadgets, and so on. But what are the keys to keeping this going into 2015 - any tips, tricks or software goodies that you need to know about? It's all here. This is a major revamp to the original article, bringing advice, links and software up to date! 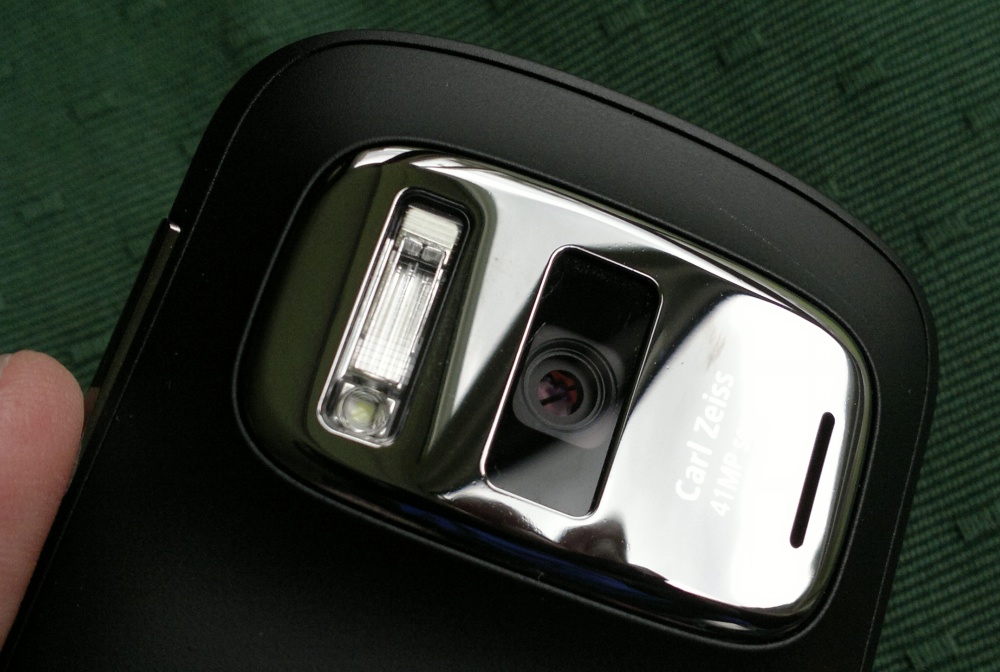 For once, I don't think a 'pimping' piece of mine needs any lengthy introduction to the device itself. The Nokia 808 PureView has been featured more on All About Symbian than any other previous device and its benefits are well known. I'd highlight, in particular:

Against these selling points, unique when taken as an ensemble, are the obvious cons of an operating system which ihas now been abandoned by Nokia/Microsoft, an ecosystem which has been officially 'frozen' and about to be abandoned altogether, and something of a widening application and service compatibility 'gap' with the rest of the world.

Hopefully this 'pimping' guide can help address some of these issues, at least.

Central to a lot of what follows is discovering as much independence as possible. With Nokia/Microsoft effectively washing its hands of the Symbian handsets (apart from contractual 'normob' support calls/emails and repairs if you're very lucky), getting a Nokia 808 up to par in early 2015 is very much a DIY job. But the effort is worth it and your 808 can see a whole new lease of life. 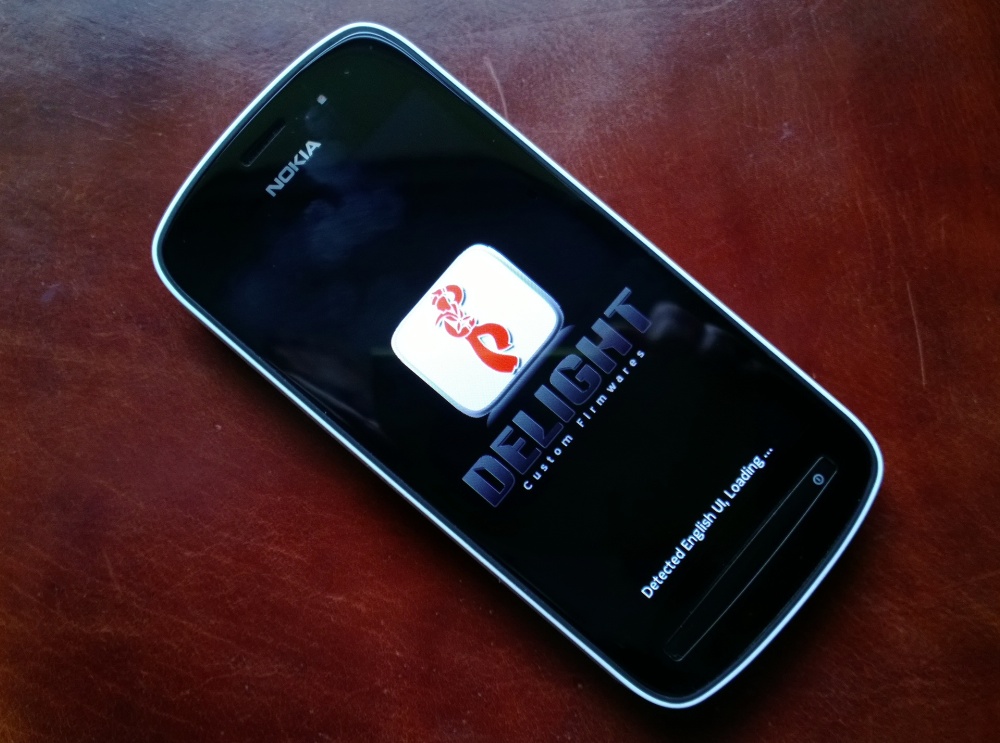 Core to this 'pimping' is the use of custom firmware. The best known is Delight 1.5 and it's what I'm using here. It's easy to get scared off, from trying to flash (refurbishing) a Symbian phone, but once you've got the right version of Phoenix installed and all relevant USB drivers already in place, it turns out to be a piece of cake. Going from stock firmware to custom firmware does mean wiping the system (C:) disk and thus you'll have to reinstall all your apps and data, but subsequent updates to the Delight firmware can be overlaid, keeping everything intact, happily.

The core reasons for going with custom firmware here are: 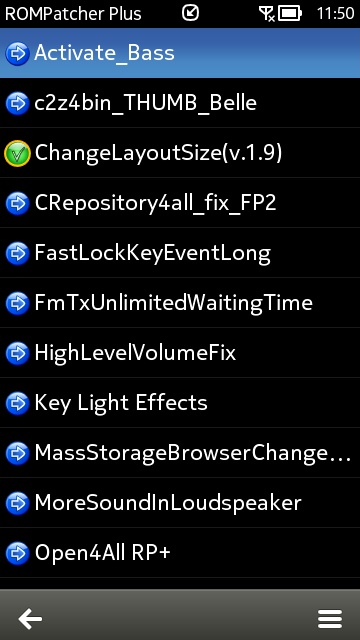 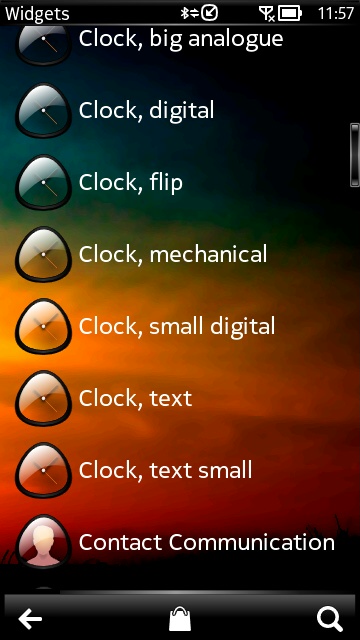 Two glimpses inside the options available with custom firmware - every tweak, every widget imaginable, all available, here in Delight.

Of course, however much cruft is taken out in custom firmware, however many extra options and widgets, however many graphical tweaks, you're still ultimately limited by the core Symbian applications. Web has famously struggled with modern desktop-aimed web sites, many modern pages have a Megabyte of images and Javascript and Web was designed for a slightly simpler age.

Having said that, Web still works very well for 'mobile' sites (see Google+ below, for example), I tend to keep my own mini-directory (in need of an update, actually) as the home page, but of course you can construct your own... Opera Mobile, while twice as fast as Web for many modern sites (with faster javascript handling, for example), is still ultimately constrained by the relatively limited processor (even in the Nokia 808) and lack of investment in the Symbian code by Opera Software. But it's worth keeping around to at least have a stab at any desktop-designed web layouts you need to access. Web will get lauched by default in Symbian and there seems no way to make a default of 'Opera Mobile' stick, sadly - one 'bug' which will never get fixed.

In fact, my preferred browsing option in 2015 on Symbian is now Opera Mini again, shown below, which handles all that progressively bloated content at the server side and just sends down the bit the Symbian client actually needs. Give it a try! 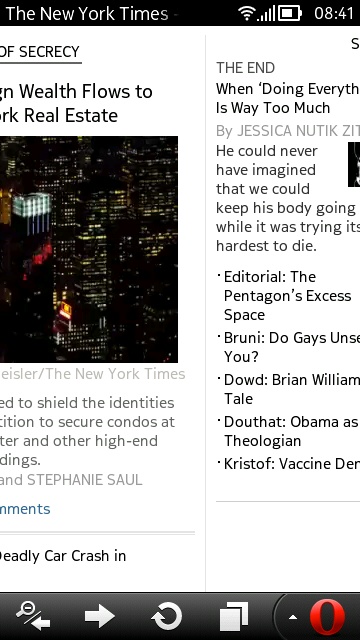 Email presents an issue or two, too. Almost everyone reading this will use Gmail, I suspect, and the old 2010 Java client is now very flaky on modern devices. While the old standby of using Symbian's one Mail for Exchange 'slot' for Google and Gmail no longer works for most of us because of Google's withdrawal of the protocol for mainstream use. I use Nuevasync to collect my Gmail and push Contacts and Calendar around and this has worked well for the last year, with no glitches at all.

It's also worth using the default IMAP connection for email, contacts and calendar through to outlook.com or hotmail.com, especially if you're planning on moving over to Windows Phone at some point.

One of the central tenets of a modern smartphone is, of course, keeping you connected with your online followers and friends. Symbian's native Nokia Social application is written partly in Qt and partly in Web runtime (I believe), with the result that it's slow and inflexible (and now officially not supported anymore) - and dumped unceremoniously from the Delight custom firmware. Which means that you need to source your own clients for the social networks you're interested in:

The Swype way - It's no secret that I wasn't a fan of Belle FP2's qwerty keyboard, at least in portrait mode, where there's no auto-correction of words. Such a step backwards in terms of real world usability. In desperation, I turned to Swype, implemented on Symbian in useable (though demonstrably not perfect) way, since it offered full text correction in portrait mode - by definition. In fact, on the whole, Swype works really well on the narrow screen of the Nokia 808 - the input area is just the right size for a thumb to trace out letter combinations. There are just a couple of areas within Symbian's UI where the Swype pop-up keyboard proves inappropriate (because the applications concerned don't know about Swype and don't allow for it to appear. The quick reply facility in Messaging is one such. Personally, I find I can work around these areas and enjoy the speed of Swype the rest of the time - but your mileage may vary. The best installer to grab is Swype Xeon. 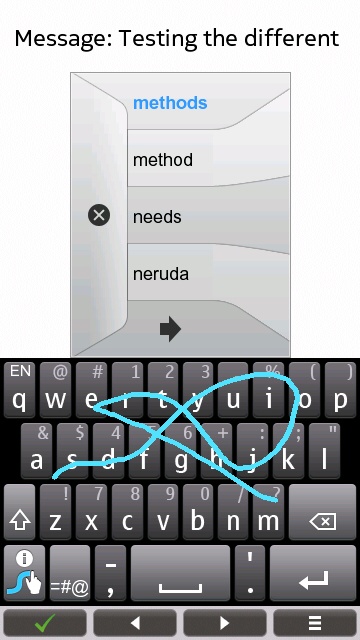 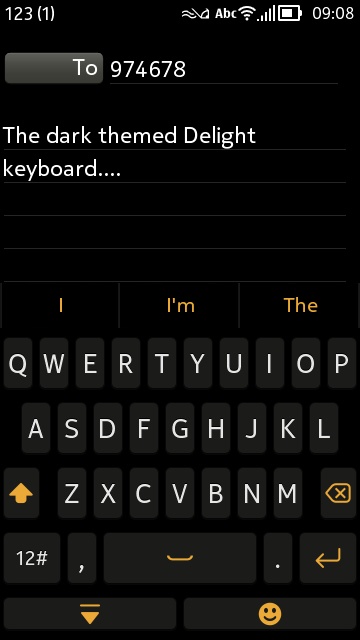 The traditional way - it's a tough call, but if you get annoyed by the UI instances where Swype gets in the way then you'll have to live with the Symbian keyboard - but at least it's improved and very power efficient and dark theme in the Delight custom firmware, as shown above, right. Yes, you have to correct words by tapping on suggestions, so a lot depends on how many mistakes you make and how worried you are by the Swype oddities!

The Nokia 808's multimedia prowess is well known, albeit that the screen resolution is looking low-res these days, even for a 4" screen. Symbian's range of supported codecs is excellent, for sideloaded MP4 (and similar) files, but you're also going to want to branch out into YouTube and Vimeo, which is best addressed by grabbing CuteTube: 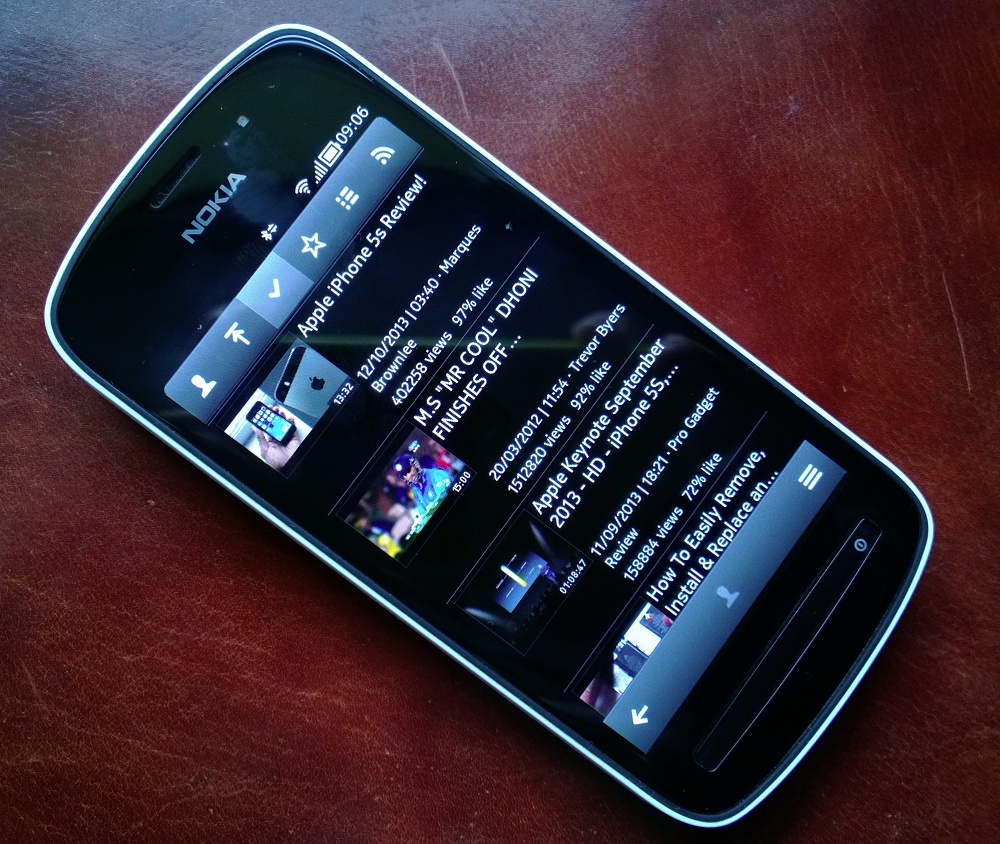 And podcatching is now taken care of with Poddi, shown below, (Podcatcher had become increasingly unreliable, crashing regularly, at least in my experience, under Belle FP2). This, and almost everything else mentioned above is now free, by the way. Did I not mention that? One of the advantages of being right at the tail end of a platform or ecosystem! 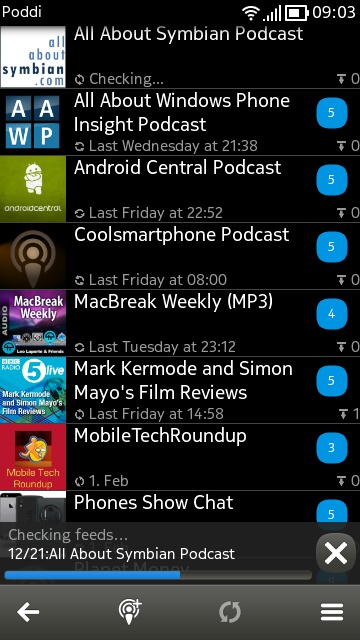 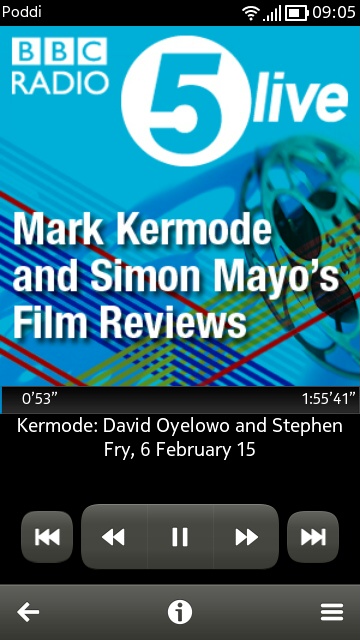 Also note a couple of things about the audio side of multimedia:

All hackery and no play makes Jack a dull boy, etc.... One common criticism of Symbian is that it doesn't have enough games available for it. But every time I head over to my own Games directory I'm still struck by how much more there is than I'll ever have time to play through. We're not talking a massive, iOS-like catalogue here, but still plenty to amuse you in boring moments.... 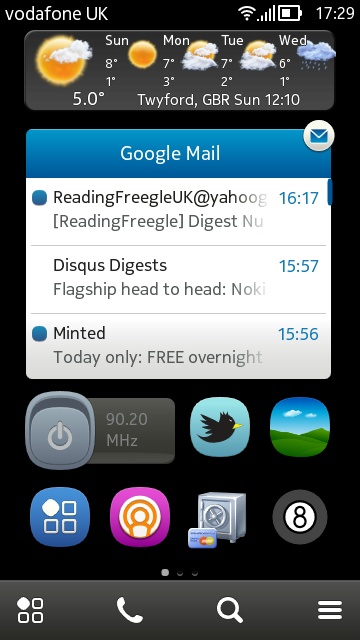 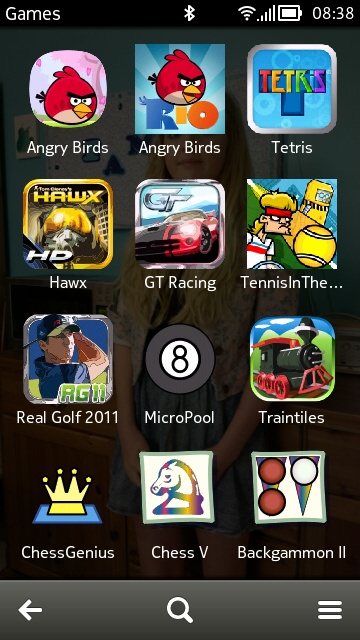 My main homescreen, weather widget is now courtesy of qooWeather II, plus app shortcuts to Tweetian, Gallery, AppList, Poddi, Handy Safe Pro and Micropool... and some relaxation titles for later!

With games not needing to be kept updated because of API changes, most can be left in the Nokia Store, despite its update freeze, of course. Though I'd yet again urge Symbian developers - of games or general apps - to seriously consider going freeware or donationware and thus being able to release their SIS file independently of the Nokia Store or via AppList. Just in case. Many users (such as myself) have also been stockpiling SIS installers, including for games - when the Nokia Store goes completely, look out for some of these archives to appear offline, albeit unofficially.

The Nokia 808 PureView continues to be a phone that ticks more boxes for many people (including me) than most of the competition. Armed with custom, install-server-hacked firmware and applications, utilities and games installed where necessary from AppList-sourced or side-loaded SIS files, there's no reason why the 808 can't continue to work its magic for some time to come - whatever Nokia/Microsoft do or don't do from a support standpoint. And I've already recommended that 808 fans consider getting a spare, since the 808 is getting harder and harder to find now. 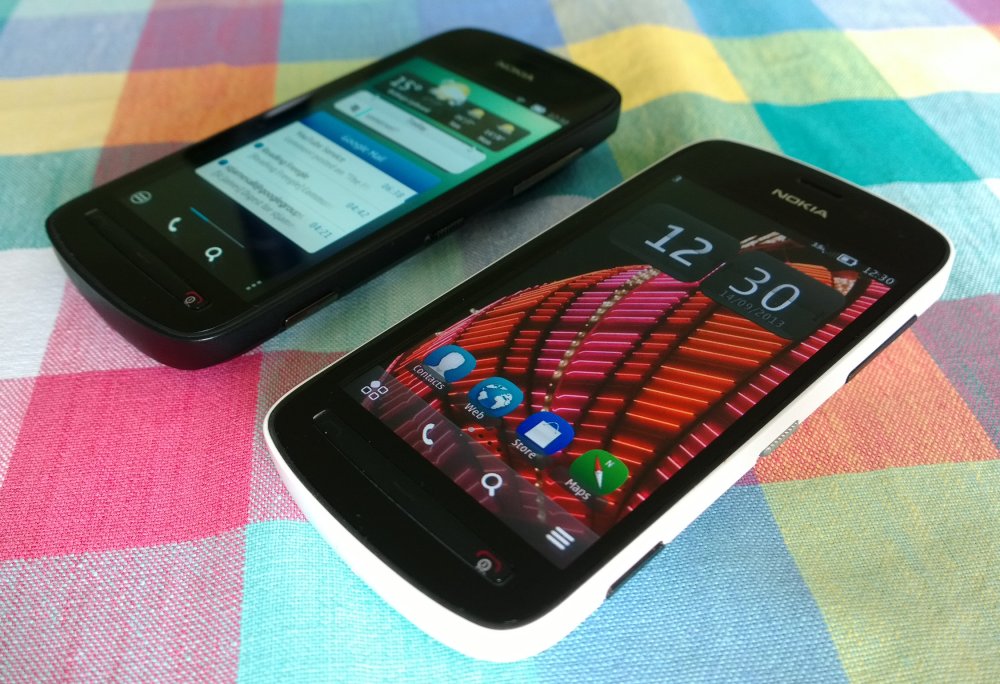