The end of the road for Swype on Symbian?

A new year dawns and it seems that the Swype (v2.x) Beta that many of us had been using on Belle FP2 devices like the Nokia 808 has stopped working properly. Reported faults include simple non operation, device freezes and bogus update checks. This is the end of the road for Swype on these devices, though note that the earlier Swype v1.x (still in the Nokia Store) still works fine on Belle Refresh devices like the N8 and C7. [Update: see below for a hacked SIS installer that still works fine, at least on devices freed from the stock Nokia firmware restrictions!]

On my Nokia 808, having faced complete non-operation today, and even after disabling it (in Swype's own settings), trying to remove the 2.x beta version was tricky, as the usual 'Remove' app routine for Symbian didn't work first time. I had to restart the phone and then try again.

Version 1.x (in the Nokia Store) does still install under Belle FP2 (I tried it), but it doesn't integrate at all into the FP2 split keyboard system - the latter overrides Swype.

News on older devices like the N8 is better, in that the (non beta) version 1.x in the Nokia Store still installs and works fine (under Belle or Belle Refresh, of course): 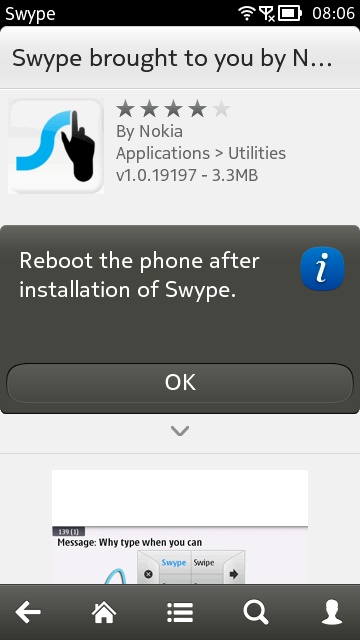 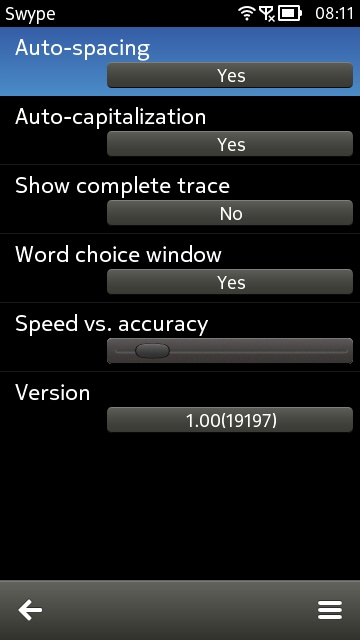 It's perhaps to be expected that betas expire at some point, though a proper warning notice would have been nice, rather than Belle FP2 users suddenly find that things just weren't working and have to diagnose the problem for themselves.

Ah well. What now for Nokia 808/701 users? No Swype, it seems, so it's back to the built-in QWERTY keyboard. This does suggest words after mistypes, but (crucially for me at least) doesn't auto-correct them on the fly (as Swype 2.x did).

Update: thanks to Claudio in the comments below - we have a fix - at least for people who have abandoned Nokia's stock firmwares and switched to a custom firmware like Delight. Swype for Xeon (another CFW, but that's not vital here) installs and works fine on my (Delight CFW) Nokia 808, even in 2014. The usual caveats about Swype not being ideal for Messaging's conversation view apply, but otherwise Belle FP2 is up and running with Swype again!

Filed: Home > Flow > The end of the road for Swype on Symbian?