Symbian cloud sync: Out with Google, in with Microsoft and Windows Phone?

Although some local 'sync' options are available for our Symbian smartphones (e.g. locally to Nokia Suite on a Windows PC), for most of us 'sync' now means synchronisation to an online service. In the good (bad?) old days, this meant messing around with SyncML, but things have moved on and new protocols have emerged as standards. So where do Symbian handsets stand and is there a solution that is future proof? Could it be that the changes at Google's end are unwittingly nudging many of the hundred million Symbian users into a Microsoft-centric solution, following Nokia into the brave new world of Windows Phone?

Microsoft's Exchange ActiveSync has been through several versions in the last decade but had gradually emerged as the standard way to access email, contacts and calendar from any device and through any service... and then Google, trying to cut down on royalty payments to Microsoft, presumably, announced that it was terminating most people's access to Gmail, Google Contacts and Google Calendar using Exchange - quoting CardDAV and CalDAV as the replacement protocols. There was a slight extension to the termination but we now find ourselves in a situation where a new Symbian-powered device isn't accepted for Exchange set-up to Google's servers*.

* Interestingly, devices which have previously synced using Exchange protocols can continue to be set up again (as I found when deleting and re-adding my Gmail mailbox on the 808 recently).

Now, if you're determined to carry on syncing PIM data (Personal Information Management, i.e. contacts and calendar) to the Google cloud (for example, if you have extensive reliance on Google services and/or have an Android smartphone as well) then there are solutions, third party intermediaries, which can help, as detailed in our original news post.

But, given that Nokia has made the move to using Windows Phone, along with a focus on Microsoft's Outlook/Live cloud, and given that many current Symbian users will be investigating whether to follow Nokia's hardware prowess, even if it means a change of smartphone platform, I wanted to investigate the practicality of syncing a Symbian-powered smartphone to the Microsoft cloud and thence to (and from) a Windows Phone.

To get set up

You're done, but don't be too impatient, since it will take a good ten minutes for everything to sync over from Microsoft's servers. You can use your phone as usual if you must, but a better strategy is to leave it alone and go make a cup of tea. Don't worry, after this first sync and the second, which does a load of verifications back to the server, future Exchange syncs will be far, far faster, involving just any PIM changes.

If you tap back and then go into Mail's settings, you can explore the defaults. In Settings, tap on the mailbox name (often shown simply as 'Hotmail') and then 'Mailbox'. You might want to add a 'signature' to go out at the bottom of each email sent from the phone? Also, back a screen, tap on 'When to sync', since you'll almost certainly want to change the times and days. 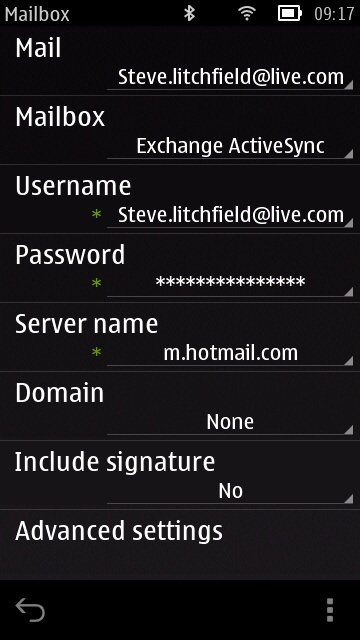 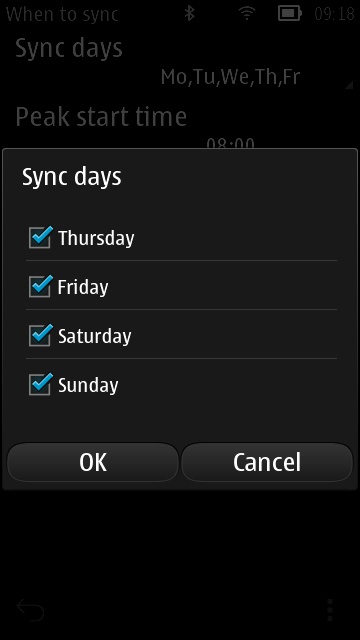 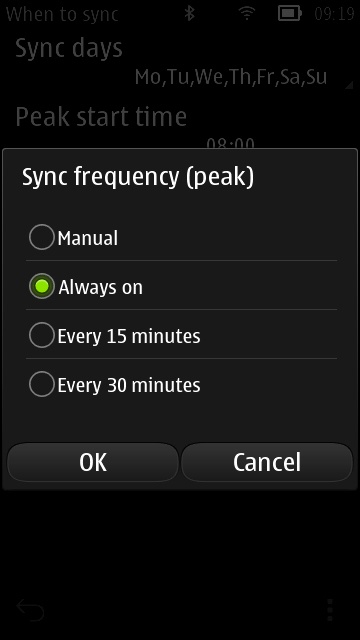 In my case, adding seven days a week operation and adjusting the sync frequency to 15 minutes. 'Always on' sounds good, implying instant mail delivery and instant syncing of PIM changes, but in my tests with Symbian and Microsoft's servers, this rarely worked and an underlying 15 minute refresh cycle seemed to be in operation anyway. So I simply set this cycle explicitly.

You can test your new future-proof Exchange sync system by creating a contact or calendar record on the Symbian phone and then watching for it in outlook.com in a desktop web browser (or, indeed, in a handy Windows Phone also signed into the same Microsoft account). It should appear with 15 minutes. Ditto records or events created on the Web (or on the Windows Phone), these will appear on the phone within 15 minutes too. 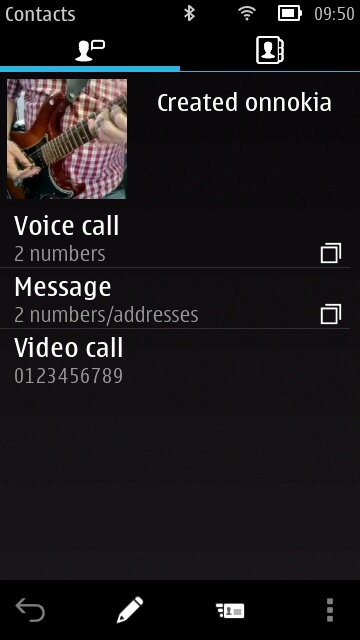 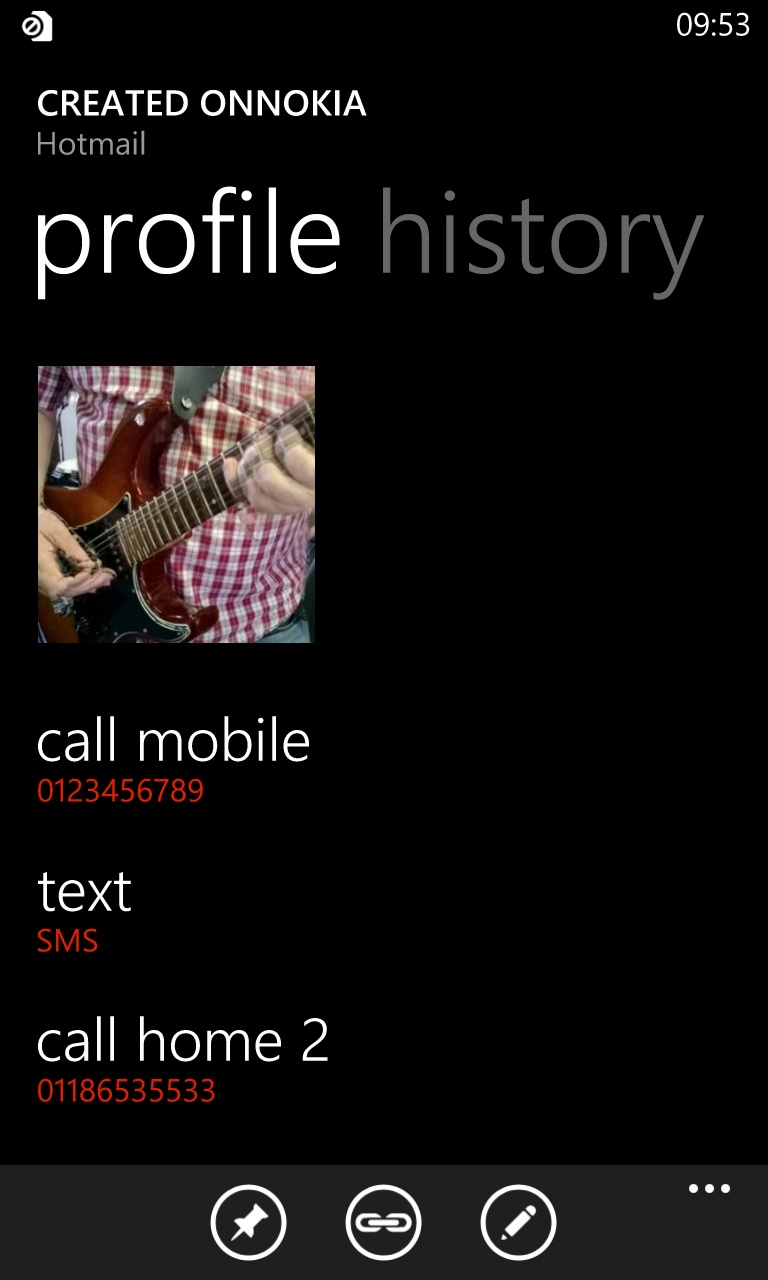 Testing PIM data sync through the Microsoft cloud to Windows Phone - and back...

I did tests with various forms of 'rich' contact information, adding notes, images, etc, then 'rich' calendar events, again with location and notes, all in both directions and in every case the sync was perfect, with everything carried over. Phew!

The aforementioned 15 minute sync cycle might be a showstopper for some. I can only conclude that 'always on' isn't compatible with Symbian, so if your business lives or dies on getting email and data updates the instant they are created on the server then perhaps this solution isn't suitable for you. However, for most people a 15 minute sync will be fine - and don't forget that a sync can be manually initiated at any time by tapping the sync icon in the Mail toolbar.

The limit of one Exchange account per device may also be an issue, for example if you also really wanted to try and keep Google sync going as well, or if your company's IT dept wants you to pick up corporate email this way. In either casem you'll be better off moving straight to Windows Phone or even Android or iOS.

Not so much a caveat as a worry, but Microsoft seems intent on confusing everybody in its naming system for its cloud services. On the web it's 'Outlook', the Exchange server identifies itself as 'Hotmail' and most people will be using a 'Live' email account. In most places these can be freely mixed and matched, but there's potential for significant confusion.

Filed: Home > Features > Symbian cloud sync: Out with Google, in with Microsoft and Windows Phone?