Review: Lost In The Pyramid for S60 3rd Edition

CrazySoft, best known for their arcade puzzle games, try their hand at an adventure for S60 3rd Edition devices. How does it fare?

Lost In The Pyramid for S60 3rd Edition 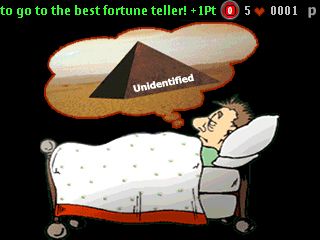 This reviewer is a bit worried about CrazySoft. They started their series of S60 releases with a couple of solid, original arcade puzzle games, PaintBall 2 and Frutakia, which were professional-looking titles of the kind you might find on a Game Boy. CrazySoft then followed these up with Snake Deluxe, a disappointing snake clone. Now they bring the S60 world a new adventure game called Lost In The Pyramid, and while it's very ambitious, it doesn't do much to improve matters.

You are Indiana Bones, the famous archaeologist, who constantly dreams about a mysterious pyramid in the desert. The first part of the game lays the plot with a series of cut scenes which require simple yes/no responses in order to progress. The main part of the game introduces some slightly more traditional graphic adventure scenes, with rooms containing objects which you can examine and sometimes pick up, combine or use. There's a graphic inventory for objects which you manage to pick up. 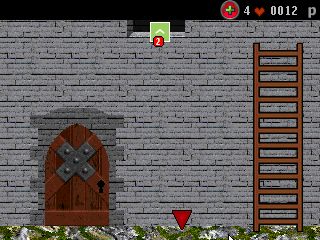 You begin the game with 5 health points, and various actions may eat away at your health. When it reaches zero, the game ends, although you can continue if you don't mind resetting the score. Your score increases when you perform various arbitrary actions.

When you click on objects you're presented with the options of examining them, doing something with them, or using an object on them, as if it was a traditional Sierra-style graphic adventure, but the options presented to you by the icons are fairly random: clicking on flowers asks if you want to eat them, while clicking on a skull asks if you want to play football with it. The problem seems to be that the game won't let you actually pick up objects until you already have another object you can use with it, and there are no clues to tell you which other objects will do.

When you do solve a puzzle it's frequently through a random series of unconnected actions: take a knife from a rat hole (but only after looking in it lots of times repeatedly), cut some flowers with the knife so you can pick them up, cut a tooth out of a skull, put the tooth and flowers in a cauldron to make a bomb (!) and use the bomb to blow up the door of the room you're locked in. 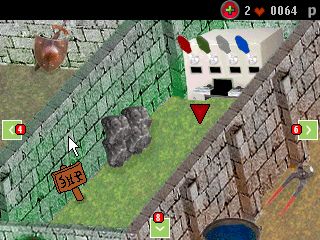 The scrolling around the rooms is jerky and slow even on the fastest setting, and some of the puzzles which involve rapidly selecting an area of the screen are made too difficult by the clunky interface (the game was originally designed for use on touchscreen devices).

All too often, "solving" puzzles is a case of just memorising the consequences of your actions: Looking into a mouse hole increases your score, but looking into a keyhole injures you. Going to a psychiatrist loses you a health point, but going to a fortune teller increases your score. Picking up a torch reduces your health, but turning on the light switch illuminates the room.

What's strange is that there are far more interesting and rational tasks later in the game, the whole foundry sequence plays out logically for example, but these are quite a way in and it's doubtful whether most people will bother staying the distance. The graphics also seem to improve noticeably, although they still have an amateurish feel and you're always wondering whether the nicer graphics were actually made for the game or if they're just more stock images.

Lost In The Pyramid is fairly short, it takes about a couple of hours to crack, although the very last puzzle is really frustrating. For the benefit of anyone stuck on it: dah dah dah dah di 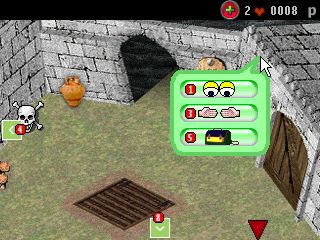 The look of Lost In The Pyramid can only be described as haphazard. The graphics don't share any sort of common look, and appear to have been mostly taken from various clipart sources, some of which are photographs, some paintings, some drawings, and some cartoons (one of the pictures even has a cartoonist's signature on the bottom!). The Windows XP rolling green fields make a cameo appearance in the end sequence.

The graphics that don't seem like clipart are rather poor for a commercial game, and sometimes appear as though they were knocked together on Windows Paint. For example your character is represented not by a human being but by a red triangle.

Sound is virtually non-existent, save for a very few digital samples here and there. You groan when you lose a life point, and there's a sparkly noise when your score increases.

It is difficult to recommend Lost In The Pyramid, even to adventure fans. It looks and feels strung together, it has no real plot and its puzzles consist either of yes/no responses to silly questions, or require mostly random actions with mostly arbitrary consequences. To cap it all, it's $19.99, which makes it fairly expensive by S60 game standards.

It's really good that CrazySoft is trying to branch out from puzzle games, but they have to do better than this. LITP feels like an unfinished alpha program published before the graphics or playtesting had been done. There might be a good game here if they'd taken the time to do some original artwork, improve the interface and put in more logical puzzles at the beginning.

There are many alternative adventure games on S60 I'd recommend more strongly, from lost gems such as MagiXoft's Astro Quest and Magic's Quest II (S60 1st and 2nd only I'm afraid), to ports of PC games such as Return To Mysterious Island. Emulation has also opened up a whole new world of adventures on S60, including the SCUMM games and classic ZX Spectrum text adventures.

PS: You can see a gameplay video of Lost In The Pyramid over on the Unofficial Nokia Gaming Blog. 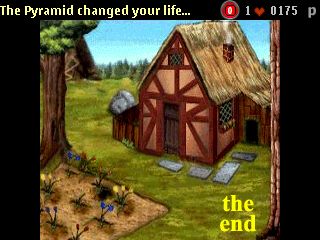 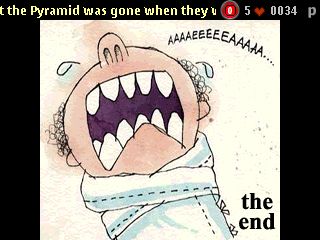 The two alternate endings to Lost In The Pyramid. Anyone who pays $19.99 for this game will probably end up feeling more like the second ending.

The version of Lost In The Pyramid reviewed is for S60 3rd Edition. The game is also available for UIQ3.

Lost In The Pyramid can be played in the following languages: English, French, Turkish, German and Italian.