It's... another snake clone! But can CrazySoft reinvent this old favourite and offer us something new? 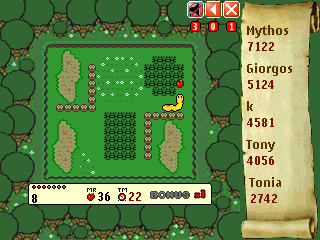 The phone game Snake is, according to some sources, the most played video game in history. Far more people own mobile phones than games consoles, so this most-played claim might well be true.

Whatever the case, there's no doubt that almost everyone reading this review will have had a go on Snake at some point in their lives, and probably owned a device with it built in.

So, how does CrazySoft's latest S60 game, Snake Deluxe, stand out from the vast number of other snake clones out there? Well... it doesn't, not really.

Snake Deluxe plays pretty much like any other snake clone: you steer the snake around a small obstacle course avoiding objects and collecting a certain amount of food to advance to the next level. Snake Deluxe has a timer for each piece of food: fail to collect it within the time limit and you lose a life. There's also a selection of bonuses around the place which give you extra lives, extra points or extra time.

There are three play modes in Snake Deluxe: Easy (which lets you play until you die on any unlocked level), Hard (same as Easy but with shorter time limits and a faster snake) and Adventure. 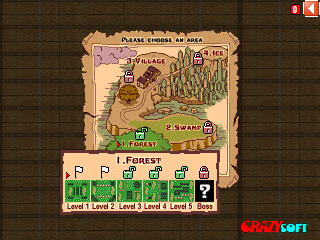 Adventure mode is simply Easy mode but you have to work your way through all the different levels in order, with a boss level after every five ordinary levels. The boss level involves standard snake gameplay, but you collect lightning bolts instead of food, with each bolt damaging the boss. The boss retaliates by occasionally scattering objects at random in the level which you have to avoid. Once you've collected your quota of bolts, the boss is defeated.

The menu controls are CrazySoft's usual and sensible system of having a number next to each option, so you just press the appropriate number on your keypad to select something.

The in-game controls suffer from an annoying feature however: there's a noticeable delay between telling your snake to change direction and it actually carrying out your command. You do get used to it, but it's difficult to pull off some of the last minute changes of direction which are so important in the game, and it's silly that the player even has to get used to something like this. You can control the snake with the d-pad or keypad numbers, but they're both just as prone to a delayed reaction.

There were also some collision detection errors, the snake would inexplicably die as if had hit an object when there wasn't anything near it, costing the player a life unfairly. 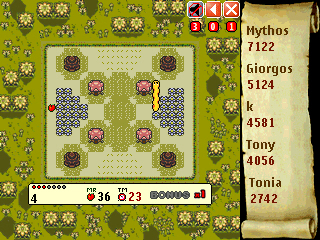 Snake Deluxe isn't the most attractive game in the world, it has very uninspired and untidy graphics. It's the kind of slapdash stuff you see on games people write when they're first learning to program. This is a real shame, as the developers CrazySoft have done some relatively polished visuals on their previous S60 products Frutakia and PaintBall2.

Sound is similarly dull, there's no music and the only effects are a handful of sound samples (munching for eating food, a crunch when the snake hits an object, a fanfare at the end of a level etc).

Snake Deluxe takes a pretty tired genre, fails to do anything really new with it, features some annoying bugs and the game doesn't even look good. It's difficult to recommend this unless you're a diehard fan of 2D snake clones.

Instead, you ought to check out Nokia's highly-acclaimed and completely free 3D extravaganza Snakes for N-Gage and S60 3rd Edition smartphones. If you want a CrazySoft title I'd strongly recommend PaintBall 2.

PS: You can see a gameplay video of Snake Deluxe in action over on the Unofficial Nokia Gaming Blog. 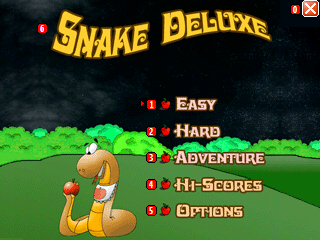 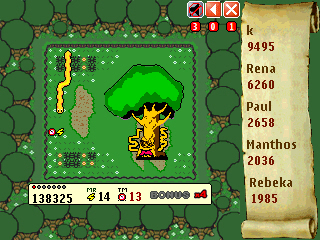 This game was reviewed on a Nokia E61, and used the S60 3rd Edition version of Snake Deluxe. There's also a UIQ3 version available. Please note the S60 3rd version requires a QVGA screen resolution, either 240x320 or 320x240.