PaintBall 2 is a slick, colourful puzzler with a variety of different game modes. Is it a great all-rounder, or just a plain jack-of-all-trades? Read this review to find out... 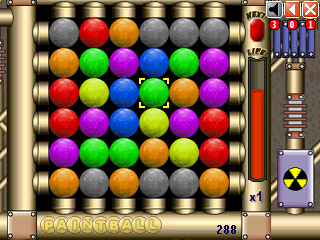 PaintBall 2, by Greek developers CrazySoft, is a puzzle game which revolves around trying to clear coloured spheres from the playing area by painting a row of three or more the same colour.

Your paint colour changes after each move and your paint supply (or "life") is limited. When you run out of paint, the game ends.

If a row of same-coloured spheres is next to one of the pipes that surround the grid, the pipe sucks it away so that more spheres can fall into the playing area from above. When a row disappears, you get more paint and your score goes up, with a longer row giving you even more paint and points.

An added twist is the concept of "hot pipes", where pipes that are used a lot start to glow red and give you bonus points and paint. There are also other extras, such as wobbling spheres (which you have to suck away as quicky as possible for bonus points) and letter spheres (which give you a mega-bonus when you spell out the entire word "paintball").

This review was written using a Nokia E61, and uses the S60 3rd Edition version. Please note the S60 3rd version is only for models with 240x320 or 320x240 screens, other resolutions aren't supported. There's also a UIQ3 version of PaintBall 2.

What makes PaintBall 2 particularly strong is the variety of gameplay available in five different game modes. There's a mode to cover every style of puzzle, from strategy to casual time filling to frantic action:

- Easy Mode: This is best for just filling in time and isn't too taxing. It's turn-based so you don't have to concentrate too hard, and there's not that much to think about, at least on the early levels. As you progress though, you have to start using hot pipes a lot in order to survive.

- Hard Mode: This is a more frantic mode which requires more concentration. Your paint supply disappears even if you don't use it, so you have to paint spheres as quickly as possible in order to survive.

- Panic Mode: This is Hard mode, but with a 100 second time limit to make it even more demanding.

- Heat Mode: This is turn-based like Easy mode, but rows will only disappear when they're next to hot pipes. You have to think pretty hard before painting spheres in this mode, as where you put a colour makes a big difference.

- Chroma Mode: Perhaps the most strategic mode, Chroma is turn-based and when you paint a sphere the colours you use mix with the colours already on the sphere. There's a colour chart included within the game which you can consult by pressing '7', and once you've used it enough you start to remember which colour mixtures produce which end colour. (There was a British quiz programme called Turnabout that featured a similar premise.)

You can save and exit your game at any point if you need to close the application and want to carry on later. It will automatically start where you left off when you next load the game.

You can also upload your scores from any mode on CrazySoft's web site by entering a code given to you in the game. 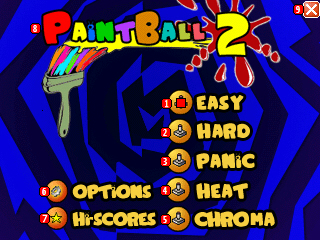 The actual gameplay is done entirely through the direction pad and it works perfectly well. Options menus can be navigated by pressing the numbers next to each option, so it's very easy to find your way around (for example '3' mutes the sound in-game). I didn't have a chance to test the UIQ3 version, but I should imagine the touch screen capability suits this game very nicely.

The graphics are functional and not spectacular, but that's how things should be in a puzzle game. The colours are clear and distinct, and bonuses like the wobbling spheres are a nice touch.

Sound effects are also very nice, with the pipes producing a disturbing sucking noise whenever a row disappears. You may want to turn the sound down in public though as you will get some funny looks from your fellow bus passengers.

PaintBall 2 is a solid puzzle game with enough variety in the game modes to suit a whole range of tastes and moods. It's been well implemented with clear graphics and distinct sound, and an intuitive control system. All in all, pretty good!

PS: You can see a gameplay video of PaintBall 2 over on the Unofficial Nokia Gaming Blog.