You may recall seeing some pointed comments by me in the recent mini-review of Checkers Deluxe, with a load of opportunities in the game to tap a button to fire off premium SMS to buy such and such a function? The overuse of this mechanism has in fact inspired me to put finger to keyboard in full 'rant' mode. This is all with a Symbian perspective, though elements of my complaints will of course apply to other mobile platforms.

Let me get one thing very clear, right up front. I'm all for developers making money. Users buy their apps, the developers are happy and so create more apps, and the cycle goes on for the mutual benefit of all.

In an ideal world, an app or game would be priced at an amount, say £3, and users then decide whether to buy it or not. If they buy it then they get all of it, they can re-download it onto future smartphones or after a reset, and so on. If they decide they don't want to buy then they don't get it at all.

Seems simple enough, doesn't it? Yet this simple model is being shaken by two factors:

As a result, one new trend is for developers to experiment with in-app purchases. In other words, you give the app or game away for free, solving both the piracy and app price problems in one fell stroke. But then you hold back some of the features or levels (or whatever), demanding that users pay for these using provided mechanisms within the app or game, as needed.

The theory is good. One might almost consider it a modern version of the shareware or crippleware ideas, where a user would start using your app or game, get hooked on it and start hitting your built-in restrictions, and would then pay to have these removed and the full app or game unleashed.

However, in practice, the mechanism being used is totally different and it's a far more worrying, even a souring experience for the poor user.

Think about the shareware example above (I was a prominent shareware developer back in the day!) A user enjoys the app or game and clicks a link (either in the app or on a web page) to buy the full version. Often, the developer then responds (either manually or automatically) with a code that can be typed or pasted in, and the app or game is then fully unlocked. If the user should have to reinstall the app or game in the future, on this or a new device, they just apply the code again and all is well. There's no concept of paying twice - or worse.

However, think back to titles like Checkers Deluxe - I don't mean to pick on this title, but it's a good enough example. The user grabs the game for free but decides that they'd like to unlock one of the new board themes, so they click through, sending a premium SMS through the game, costing them £1.50. And this seems fine so far - the user's got something extra and is obviously enjoying the game, the developer's got a large chunk of that £1.50 and is also happy. But then either the user absent-mindedly taps on the 'submit your score' link after a game, or lets a child play the game and doesn't watch them too closely as they do this exact same thing, and realises that there's another £1.50 SMS tacked onto their phone bill. Still only £3 so far, perhaps. It's not the end of the world. 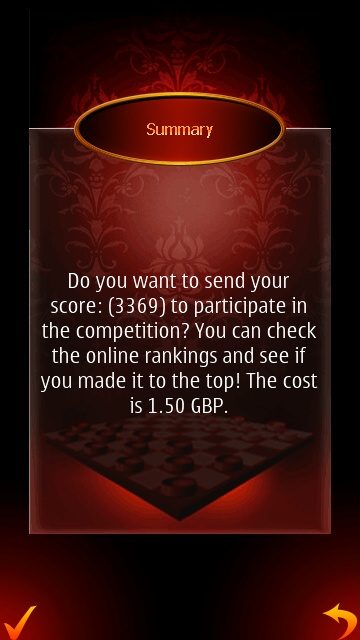 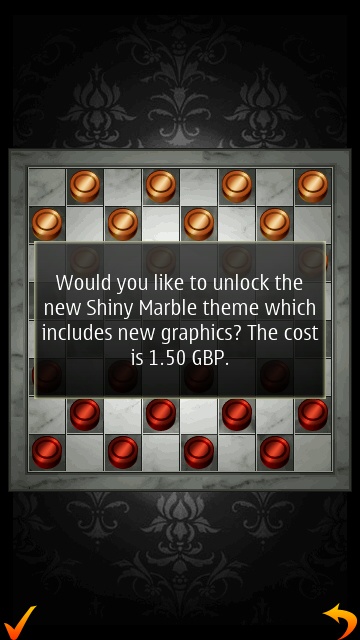 But then the user has an issue with their smartphone and takes it into a Nokia Care Point to be repaired. Unavoidably, the internal storage gets wiped (don't worry, the user can sync over all their core data!) and the game is gone. So back into the Nokia Store goes the user and downloads it again. No sign of the new board theme he liked so much, so he's got to pay another £1.50 to get it back. We're up to £4.50 in total, then, and it doesn't take much imagination to see where this might lead if the user (or their kid) gets careless. Another batch of premium SMS and the costs go up and up. You may have seen some of the stories in the press recently about kids racking up hundreds of dollars of in-app purchases in iPhone games?

[Incidentally, we've seen a bit of an analagous row brewing in the Android world recently over the way EA's Real Racing 3 is distributed, as freeware with almost enforced in-app purchases. The aim for the developer is, of course, to screw as much money as possible out of their users, and EA seem to be getting in plenty of practice... we've already seen in forums that, after reinstallation, in-app purchases of virtual gold currency are lost forever]

Staying with the Checkers example, I'm far, far happier with the more traditional model, where I'd pay £3 (say) and have the various boards and score submission functions included. Having even the possibility that an app in my pocket might start generating premium SMS is, I have to say, slightly worrying.

It's almost as bad with credit card-based in-app purchases, also used in some cases. Again, the purchase might work for this installation on this device, but you can bet that you'll be asked to pay again if you reinstall in a month's time after switching device or getting the current one repaired. If you're lucky, you can get in touch with the developer directly, quote card details and, with some effort, end up resolving the situation - but it's a lot of work for you and it's a lot of work for the developer.

So. Developers, it may be quite late in Symbian's lifecycle, but you have a (largely) working Nokia Store on each device - ignore the small percent of pirates out on the wilder fringes of the Internet (they'll get stuff for free whatever you do and they wouldn't have paid in the first place) and put up your apps and games in the main Store for a fair price. Don't complicate things - for yourself or for users - with in-app purchases.

For my part, as I've done over the last few years, I'll keep trying to educate users into realising that £2, £3 or even £5 is not a lot to pay for a quality app or game*.

* I've often quoted Micropool, my favourite Symbian game, as a good example here. At a one-off cost of £1.50, I play it for at least an hour a week, so 52 hours a year. Amortizing that £1.50 over (say) a two year period gives a grand average cost of 1.5 pence per day. 1.5p for an hour's enjoyment. So roughly 500 times better value than going to the cinema!

Over to you, then. Comments welcome - do apps generating premium SMS concern you too? Or do you think it's a perfectly valid way to handle trials/purchases?