I know what you're thinking: we've reviewed this before, back in the mists of time (2007), when QVGA was still a novelty and nHD was merely a gleam in OPK's eye. Yes, Micropool has been around the Symbian world forever, but it's still the game I install first on every single new smartphone and I still play it for 15 minutes a day. Every day. Making (gulp) 27,000 minutes of pool time since I first started playing the game. Oops.

Aside from the way it's still so fun to play, for reasons which will become obvious in the next couple of days, I wanted to give Micropool the full review treatment so that I could refer back to a modern, relevant review. Trust me, it'll be worth it.

As a computer pool freak(!), I've tried all the various ways to represent and play the game across six different OS. And have settled on the top-down version as the way to go. Yes, 3D-rendered pool is all very well and can look gorgeous, but you spend half your time battling the UI to manoeuvre your aiming point, look round the table, watch the results of shots, and so on. On balance, having a simpler resolutely top-down system, implemented well, is the way to go for a fast and fluid experience.

And Micropool is implemented very well. Not perfectly, we'll come to a few of its longstanding limitations shortly, but certainly very well. It starts almost instantly, there's never any lag or delay in bringing up any screen, and the system of cue aiming using touchscreen and then (optionally) nudge arrows to fine tune your aim works brilliantly. 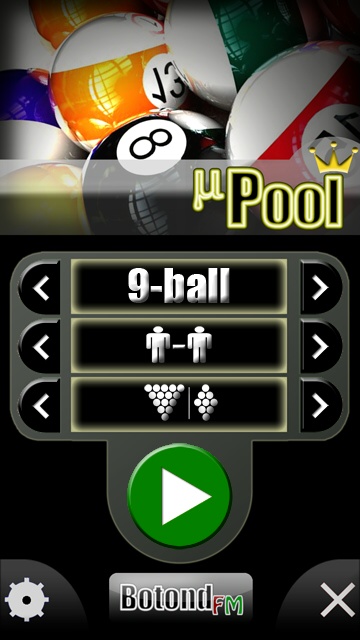 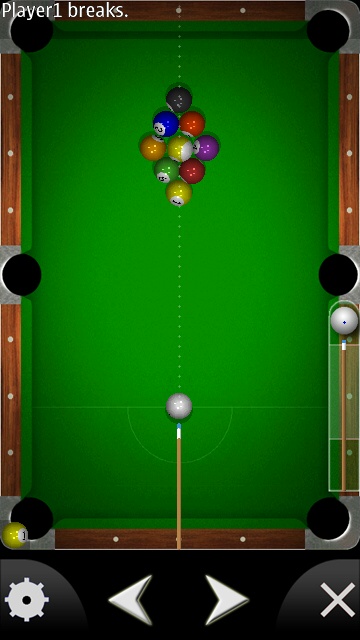 Most importantly of all, the balls behave exactly as they would in real life, in terms of roll and impacts and bouncing, in terms of cue ball control, with back/top/left/right spin applied. The acid test of any pool game is that you can size up positional shots that you'd attempt in real life - and pull them off. In this respect, Micropool is admirably realistic, again with a few small caveats listed below.

First impressions of MicroPool are very good, with a slick setup screen, giving choices between '9 ball' (where balls have to be potted in a particular order), 'US 8 ball' (where you have to stick to spots or stripes - similar to usual UK rules), 'Speed' (as it sounds, a solitaire mode to test your skill and speed) and 'Killer' (where you and the computer each get five misses allowed, after which your opponent wins). Each game can be played with a 'Light' or 'Full' ball set, depending on how full you want the table to be.

'Settings' includes the choice of three coloured tables, sound effect volume, aiming line (leave this at 'long'!) and, most importantly, 'Computer strength'. This last is critical because most pool games tend to have an opponent who's simply not good enough, so that when you make a mistake you're not punished hard enough. Making the overall game too easy. With 'Computer strength' set to 75% here, MicroPool is just about right - on 100%, even with all my experience I find it hard to win very often, so save that for when you want an ultimate challenge. 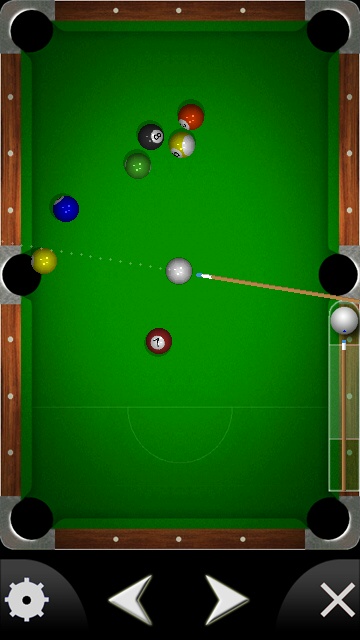 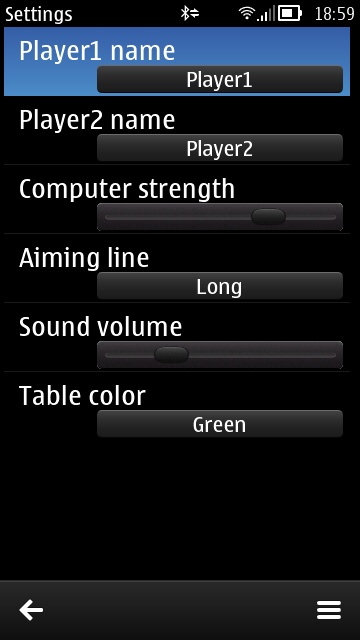 Having the different rule variations is good, though any hard core pool player will tell you that '9 ball' is the purest form of the sport - it's the one I play, day in and day out. Once you've mastered the order (in terms of colours) of the balls, the challenge of making a break/clearance under extreme positional duress is simply splendid - there's a real sense of achievement when you finally pot the striped yellow 9 ball. Don't worry if you can't remember the colour order, since the next colour needed is always shown in the corner of the screen as a pop-up. But, once you get good, you'll want to plan ahead in your break, and that means remembering that the order is 'yellow, blue, red...' etc.

Most of the time you'll be playing against the phone's AI, which is perfect for a quick challenge and to while away time. If you like, you can go multiplayer by passing your phone to a friend, but that's as far as Micropool goes in this direction. Rather showing the core game's age, there's no Bluetooth play, no online play, there's not even an online league of any kind.

Since I've now started listing flaws in Micropool, let me complete the list:

But let's not get too negative. Micropool is smoothly and beautifully animated, with crisp sound effects, realistic gameplay and it behaves impeccably when put into the background under Symbian OS - Botond FM really have game behaviour mastered - many is the time I've realised after a day or two that I still had Micropool sitting patiently in the background waiting for me to take my shot - without having had ANY effect on processor load or battery life. In fact, even leaving the game in the foreground pops up a message after a bit to announce that it's going to turn the display off and let the OS dim the screen in the usual way, to save power. Very nicely done.

In a theme that I'm going to come back to in an editorial, Micropool is also one of those game titles which effectively have infinite game play - no two games are ever the same, partly explaining why I've not only become addicted to the title, I also never get tired of it. There's always a new frame to win, a new pattern of balls to weave and blast my way through.

If you only ever download one pool game for Symbian (there are several) then grab Micropool (which has been 'on sale' now for two years!) - it's the best of the bunch by far.