Why the penny-pinching over RAM?

On device after device released over the last four years, we're seeing manufacturers saving a few dollars a unit by skimping on execution memory (RAM), with the result that huge numbers of users are inconvenienced and mystified. Steve Litchfield investigates...

Look, I'm starting to get fed up. RAM is to smartphones what brain capacity is to human beings, and yet I keep seeing devices launched with a veritable lobotomy. And no, I'm not going all geeky here, I know full well that most users don't know what RAM stands for and don't need to, but they start noticing when their applications keep closing down and they get strange error messages. And, in case, you don't know what RAM is, I make no apologies for breaking out my own handy diagram once again (see right).

Let's take a step back to the very first Symbian smartphone, the Nokia 7650. Only 4MB of flash storage memory rather limited what could be done and was by far the big limiting factor, while the 4MB of free RAM seemed cavernous by comparison. With the 3650, the one with the round keypad, Nokia fixed the storage problem in one fell swoop by including an expansion slot. Still there was 4MB of free RAM, but this time it was in danger of running out, with the extra storage memory (on MMC card) meaning that the third party application scene started to develop and the average number of Series 60 applications per user rose. The same pattern was evident through the 6600 and then 7610 and finally the 6630, the first 3G Series 60 smartphone.

In the 6630 you had a fast processor, stereo sound and enough general capabilities that it wasn't unusual to want to run half a dozen applications all at the same time. Free RAM on the 6630 was around 9MB, depending on whether your operator decided to steal extra RAM for its own customisations. 9MB was barely enough and was often a problem for power users. The 6680, its successor, was worse, with at least a megabyte less RAM, making advanced use almost impossible. At this point, a penny started to drop in Nokia's Research and Development office...

Small wonder then that the arrival of the N70, with around 30MB of free RAM, was greeted with loud acclaim and with enormous sales. On the N70, RAM never runs low and you can run almost anything you like, confident that it won't impinge upon othe running applications.

So, just when you think that Nokia have got the message about RAM, out come the latest crop of S60 3rd Edition devices, with a bigger OS, bigger displays and more ambitious programs, such as the memory-devouring new Web browser. You'd think that they'd have as much, or more RAM than the N70 and N90, wouldn't you? Er... no, they actually have less free RAM.

Let's take the N93 as a good example of how RAM works on a cutting edge device:

But, you'll argue, I managed to get everything done, didn't I? And there's still RAM left? Actually no, the 5.1MB figure was after the OS had spotted that RAM was low and closed down Contacts. And the sequence above was absolute best case, with no memory fragmentation or any other OS modules loaded. In a real world situation, there would be extra helper processes started and left running by various parts of S60, not to mention third party programs, and memory would get a lot more congested and confused very quickly. And I haven't even started on thinking about loading up a sat-nav application (there's another 6MB gone) or a Java midlet (e.g. Opera Mini, or an Instant Messaging system, there's another 7MB gone)...

The upshot of all this is that I believe a S60 3rd Edition device, with the new Web browser installed, should be fitted with enough RAM that there's at least 30MB free after booting up. And preferably 40MB. In practice, most devices are coming with less than 20MB and this causes programs to be shut down in the background regularly. Maybe for trivial use, this isn't a problem - apps can be restarted - but if you've just spent £400 on a cutting edge communicator then it's extremely irritating to have applications closing right, left and centre, all for the sake of a few dollars of extra RAM that Nokia didn't deem necessary.

To put things into perspective, consider this chart: 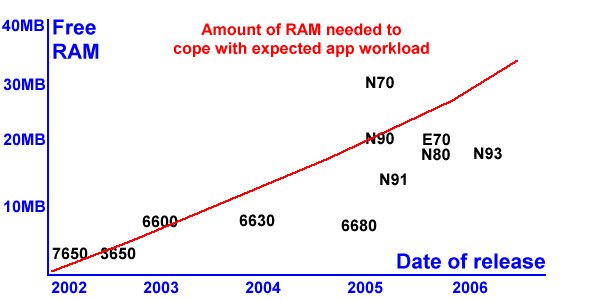 In other words, as time goes on, more and more powerful programs are developed, just as on the desktop; and there's also the factor of increasing telephony speeds, bringing in more and more innovative application ideas. But you can see from the chart that the RAM in the S60 3rd Edition E70, N80, N91 and N93 hasn't matched the figure needed for the device's workload.

Am I a power user, ranting unnecessarily? Maybe. But maybe I've got a point. And maybe, just maybe, some of the designers at Nokia will read this and get the message.

Filed: Home > Features > Why the penny-pinching over RAM?