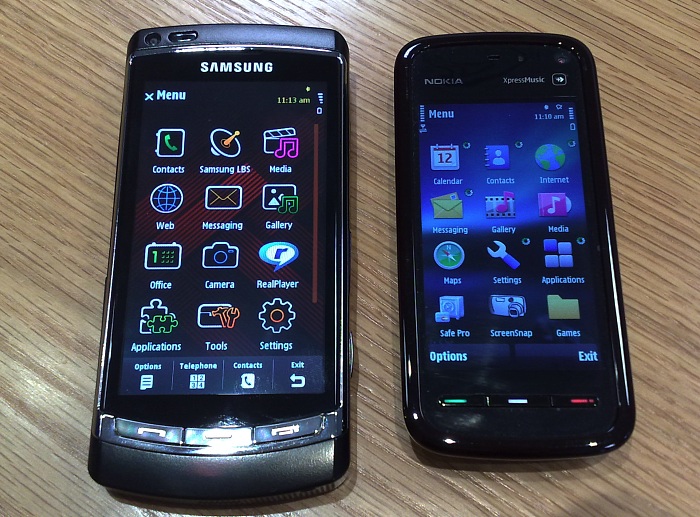 If you own a Nokia 5800 you may well have seen or heard the terms "Symbian" and "S60", and if you're visiting this site you'll have noticed we're called "All About Symbian".

For those of you who are wondering what these terms mean, here's a brief explanation:

All modern computing devices, big or small, require an Operating System, also known as an OS. The OS contains all the basic instructions that the computer needs in order to do things.

Symbian is the operating system used on the Nokia 5800, on all of Nokia's smartphones, and on smartphones from many other manufacturers too such as Samsung, Sony Ericsson and LG.

S60, also known as Series 60, is a software platform and interface that sits on top of Symbian.

Which version of Symbian and S60 does the Nokia 5800 use?

What about the S60 web browser? What's that?

It's the web browser that is built into phones running Symbian S60.

Do all of Nokia's phones run Symbian?

No. Only their advanced phone models (the smartphones) run Symbian. The ordinary cheaper models run a much simpler operating system called ISA. ISA-based phones use an interface called Series 40, and they're often referred to as "Series 40 phones".

For various historical reasons some people mistakenly think Series 40 is something to do with Symbian, but it isn't.

Are all Symbian phones made by Nokia?

No. Nokia is the biggest maker of Symbian phones, but they're not the only maker. Other companies such as Samsung, Sony Ericsson, LG and others also manufacture Symbian devices.

If Symbian is so widely-used, why have I never heard of it?

Symbian is in over 250 million devices and about half of all smartphones use it as their operating system. It's by far the most used OS on portable computing devices.

The reason you probably haven't heard of it is because it's not really a consumer brand. Manufacturers who use it in their smartphones tend not to mention it on the phone's box or on the start-up screen, so most Symbian users aren't aware that they ARE Symbian users! :-)

However that may change soon as the old Symbian company has been replaced by the Symbian Foundation, an organisation dedicated to encouraging Symbian use and awareness. The Symbian operating system has now been made royalty-free so any manufacturer can use it free-of-charge, and the Symbian "source code" is about to become open source, along much the same lines as Google's Android operating system.

Don't worry if that last part sounded like gibberish, you don't need to know anything about operating systems in order to use them. In fact you probably use several different OSes every day, in your computer, your phone, your games console, even your car if it's a new model. OSes intended for public use hide their workings behind easy-to-use interfaces so you never have to worry about what goes on behind the scenes.

What is a "smartphone" anyway?

Well, different people have different definitions of the word, but basically it means a combination of a computer and a mobile phone. Smartphones are like pocket-sized PCs, and you can even attach a monitor and full-size keyboard to many smartphones (including the 5800).

If you want a very technical definition, we would say that a smartphone lets you install and run native software. Native software means applications and games that can access the phone's computing hardware very directly, which means they can use the hardware to its fullest.

Non-smart phones can run Java apps and games, but these have to run through a special application called Java VM, which slows things down and restricts what the Java software can do. Native apps can work directly with the phone itself, and that's why smartphones can run more advanced applications than normal phones. For example smartphone games tend to have much better graphics than games on ordinary phones, because smartphone games are native software.

What's the history of Symbian? Why haven't I heard of it before?

Symbian, the company which makes the OS, was founded in 1998 and became jointly owned by the main mobile phone manufacturers including Nokia, Sony Ericsson, Samsung, Motorola and others. The aim was to produce a standard operating system for a new breed of mobile phones which had very powerful computing abilities (the so-called "smartphones"). There was also perhaps a desire to stop Microsoft taking over the mobile computing world the way they had taken over the desktop computing world. Symbian was a way for manufacturers to stay in control of their smartphones' operating system.

In 2008 the Symbian company was purchased entirely by Nokia and simultaneously turned into the Symbian Foundation, with the aim of becoming a free open source operating system by 2010. The first step of this process was to make Symbian free-of-charge, and it is now available free to any manufacturer who wants to use it in their products.

Symbian has been the most widely used operating system on smartphones for many years now, but it's not a consumer brand name, it's more like one of those behind-the-scenes technologies that powers loads of stuff without people knowing about it. For various reason manufacturers of Symbian-based phones tend to just use their own brands, and never really mention the OS name at all.

However, within the mobile industry Symbian is a very well known OS due to the vast number of phones that run it. Symbian passed the 100 million phones shipped mark way back in 2006, and there are currently more more Symbian-based smartphones than all other smartphones put together.

Symbian, originally known as EPOC, was created by the British firm Psion, who are perhaps most famous for their best-selling "Organiser", "Series 3" and "Series 5" pocket computers of the 1990s. Psion were one of the co-founders of the Symbian company, but sold their shares a few years later.

What is All About Symbian? Are you an official site owned by Symbian or Nokia?

No, we are 100% unofficial and independent. We get all of our money from the advertisements carried on our website, and we're free to say whatever we want about Symbian, Nokia, Samsung, Sony Ericsson and everyone else involved with the Symbian world.

We've historically been a fairly technical site, but we're doing these tutorials to try and help people people new to the Symbian world get the most out of their Symbian-based phones. A lot of new people are discovering Symbian through the Nokia 5800, so we've started our beginners' tutorial series by concentrating on that model.