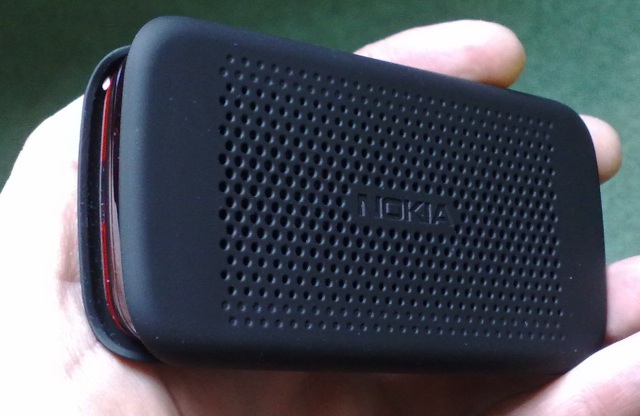 The 5800 comes with various bits and pieces included in the box, and it's important to check whether you have everything as soon as you buy the phone.

I've bought a brand new 5800 and there's something missing. What do I do?

If you've bought a new phone and anything is missing, take the whole package back to the shop and ask them about the missing item. It is the shop's responsibility to make sure you get a device's complete sales package. If they try to blame the manufacturer, they're wrong, it's the shop that is supposed to make sure the package contains everything you've paid for.

I've bought a used 5800 and there's something missing. What do I do?

If you've bought a phone second-hand, check the list of items on the seller's advertisement. If something is missing which was included on the advertisement's list, then contact the seller (politely!) and ask them about it. Give the seller time to respond (a week is probably long enough). If the seller won't respond or won't be reasonable, give them negative feedback if possible.

But if something is missing which wasn't included on the advertisement's list, then the seller has done nothing wrong and you'll have to replace it yourself. We've written some handy hints below on how to replace each item.

How do I know if something is missing?

Phone sales packages may vary from region to region, and network-locked models may also have different sales packages. Ask the shop or seller for a written list of what is included in the sales package before you buy it, so that you can refer back to it later and check you've got everything you've paid for.

What's in the standard 5800 sales package?

The following list is what comes with the standard European unlocked 5800. Most other sales packages should be fairly similar to this, though there may be some variation:

How to replace it if you have to: If the phone has broken down and it wasn't your fault, and you bought it new, you can get it repaired or replaced by Nokia free of charge under the terms of its guarantee. The guarantee lasts for two years in some countries (including the entire European Union) and one year in others.

If you've lost your phone, or if it's broken and it was your fault, then you'll have to replace it yourself by buying another one.

How to replace it if you have to: If you are absolutely sure you've lost both styluses you could try using the plectrum that also comes with the phone. If you have to have a new stylus, you may be able to order one from an authorised Nokia repair shop (go to nokia.com/support and select your region), or you may be able to find unofficial replacement styluses on eBay.

In theory any stylus will work, but the problem is that only styluses designed for the 5800 will fit into the 5800's stylus compartment, and it's awkward to carry a stylus around separately.

Of course you don't actually need a stylus to operate the 5800: hold it in one hand and use the edge of the same hand's thumb to select things. All the menus have been designed with this kind of one-handed operation in mind, and using this method you should be able to use the 5800 completely without any kind of stylus.

How to replace it if you have to: There are lots and lots of official and unofficial cases for the 5800 available from electronics shops, Nokia's website, eBay and elsewhere. Some are plastic, some are leather, choose whatever suits you best. Click here to see our special feature on 5800 cases if you need help deciding.

How to replace it if you have to: You can get a replacement official BL-5J battery from Nokia's website, or from any major electronics shop.

How to replace it if you have to: You can use any official Nokia charger with the 5800 as long as it has a 2mm plug on it (which pretty much all of them do have nowadays). Note that different chargers charge at different speeds, so you may notice other chargers are slower than the one that came with your 5800. The speed of the charger depends on the "mA" number printed on its information panel (the panel is usually near the plug's prongs), the higher the mA number the faster the charger charges.

How to replace it if you have to: The 5800's microUSB cable is totally standard and can be used interchangably with most other microUSB cables. Note that microUSB uses a much thinner plug than miniUSB cables, so don't get them mixed up.

How to replace it if you have to: The 5800's memory card slot is compatible with microSD and microSDHC memory cards. Officially the 5800 can cope with cards up to 16 gigabytes capacity, but unofficially even higher capacity cards may also work. You don't have to use Nokia cards, third party brands such as SanDisk and Kingston work fine too.

How to replace it if you have to: The 5800 can use any standard 3.5mm headphones and headsets from any manufacturer. Use your favourite headphones.

If you particularly want exactly the same ones that came with the phone though, the part numbers are Nokia HS-45 and Nokia AD-54. You should be able to buy them from large electronics websites and Nokia's own website.

Also remember that the 5800 is compatible with wireless Bluetooth stereo headphones and headsets. Click here to see our 5800 Bluetooth headphones tutorial for more details.

How to replace it if you have to: The TV Out cable lets you connect the 5800 to any standard television set. The 5800's TV Out cable has the part number Nokia CA-75U, and you can buy a replacement cable from major electronics websites or Nokia's website. This is the same cable used on many other Nokia phones such as the N95 and N82.

How to replace it if you have to: The stand's part number is Nokia DT-29. It may be a bit tricky to find though, as it doesn't seem to be sold separately at the moment. However, you may be able to find unofficial replacements for the stand on eBay.

How to replace it if you have to: The part number for the 5800's plectrum is Nokia CP-306. Like the stand, this may be difficult to find sold separately, but there may be unofficial replacements available on eBay.

As we mentioned above, you don't actually need a stylus or plectrum to use the 5800, your thumb is good enough.

How to replace it if you have to: You can download the 5800's documentation from the Nokia 5800 support site in a wide selection of languages.

How to replace it if you have to: You can download the 5800's PC software from the Nokia 5800 support site.

Filed: Home > Features > What comes with the Nokia 5800 XpressMusic and how to replace anything that's missing