Ewan Spence has been using the slightly controversial service Twitter at SXSW, and here he explains how it works in theory, how it worked in practice at SXSW and, ultimately, asks what Twitter is actually for. 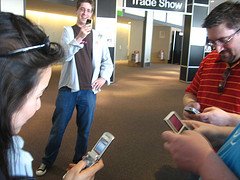 I've spent the last week in America at the South by Southwest Interactive' conference in Austin (and I'll be doing more SXSW next week as well) and there's been one overriding mobile service that has caught the Zeitgeist. Twitter (subject of Steve's editorial rant yesterday).

To explain Twitter is a rather awkward task. You register as a member, and can post short messages (up to 140 characters – once your name is added it becomes 160 characters) to your own page. Mine is http://www.twitter.com/EwanSpence. You can find and subscribe to your friends, and you'll see their messages when you go to the site, rather like a river of SMS. And that's it. There's no clear goal as to how to use the site, no usage cases on display, it's been put out there as a tool and people are using it in ways that suits them. Some people are using it as a basic link blog, some are documenting everything they do, others are using it for the occasional alert. John Edwards (US Presidental candidate) is letting everyone know where he is speaking through it.

But Twitter went ballistic this last week at SXSW. Pretty much everyone, by the end of the conference, had signed up, and alerts to breaking news, interesting panels and after hours parties were flying through the Twittersphere.

And you know what? While technically it was very nice, it left me rather cold. After all, Europe has had SMS services like this for over ten years (Locust launched their Text Messaging Community in 2006, and its abilities for custom groups, chatrooms and other gateways are still far ahead of Twitter). But it's the fusion of blogging, Web 2.0 and the sudden discovery of texting that is the secret sauce in Twitter.

It's also yet another illustration of the differences between the US and the European market. After all, SMS has been an integral part of the UK market as long as I remember – watching the great and the good of Silicon Valley scramble to add a 'Thousands of' text bundle to their plan (remember you pay to receive SMS in the US as well as send), and attempt to get to grips with the T9 shorthand on the modern abc keyboards is hilarious. 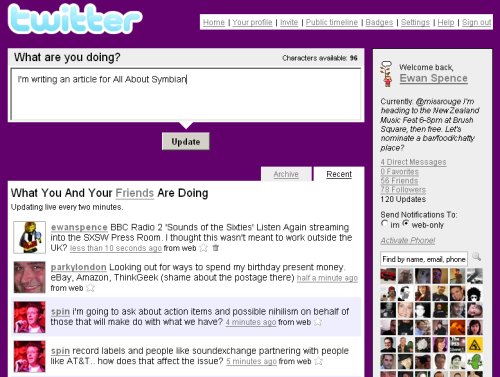 What it does prove is that, as always, people want good tools to communicate with, to find out what other people are doing, and how they can get in touch with each other. And at SXSW Interactive, Twitter actually fulfilled all of these and became not only the belle du jour, but the number one productivity tool (and winner of the 'Best Blog' award, strangely enough). The problem? Well, now that most of SXSW Interactive has left Austin, they've left behind a tumbleweed of 'landed', 'plane is home', 'sleeping', etc, and those of us staying for SXSW Music have lost the benefits of the tool.

Twitter is something, that's for sure, and there's a certain logic in leaving its use undefined. The problem is that with no clear goal there's no clear way to use it. What happens when there isn't a conference on? Or for the people not at a conference? If Twitter could answer those questions, then a lot of people would be happy joining the service – as it is, you still have to ask 'what is it for.'