It's rant time..... Steve rails at reality TV, Twitter and Jaiku, the inanity of the trivia of other people's lives and the burden of maintaining such an online presence.... 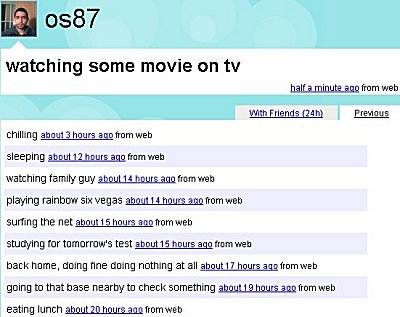 I was glad when I saw Stefan and others questioning the current rise and rise of Twitter - I had thought I was the only one who 'didn't get it'. Then there's Jaiku, championed by the likes of Antony, which looks to be along similar lines. Both services/applications allow you to use your smartphone to post very short (typically a single sentence) updates of what you're up to, so that anyone who's interested can see that you're "Having lunch at Macdonalds - very busy today" or "Stuck in traffic on 34th and 5th" or "Catching an early night" or (perish the thought) "Suffering from diarrhea today, horrible".

Comparisons with reality TV began popping up in my mind. No, not quality, edited programmes like "The Apprentice" - I mean the unedited, raw fly-on-the-wall Big Brother coverage that's now possible with digital TV and all those spare channels. You can even tune in to watch the 'contestants' sleeping sometimes. What's so fascinating about listening to other people's chatter? If I want chatter I can go out with my own friends and family and partake in what's quaintly called 'real life'.

And the rest of the time, I'd rather be doing something productive or creative or even chilling out with a good book and a good CD. Who needs inane chatter?

Similarly with the likes of Twitter and Jaiku. With one exception (which I'll come to in a moment) I haven't the slightest interest in knowing what person A is up to, where they are, what tune they're listening to or what they've just eaten. The world's too full of information overload as it is. Notice that there's a clear distinction between chatter services like Twitter and Jaiku and 'blogs' - the latter are populated by entries that, on the whole, have a point to make or a link of interest or a nice picture, i.e. a reason for the blog post being there. Chatter entries seem to be largely there just to keep the flow of entries going. It's information for information's sake. 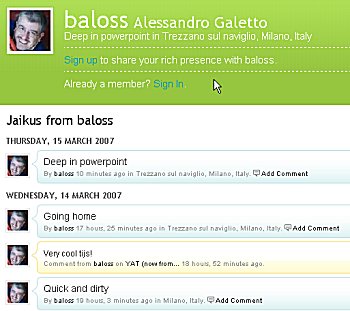 The other problem, of course, is the addiction on the part of the Twitter or Jaiku user. In addition to my 3-Lib reference site and my writings for AAS, I also started a more personal 'rants and raves' blog a year or so ago. It's hard enough to remember and to find time to update a blog, where an entry every week is perhaps enough, but the pressure of starting and maintaining a Twitter account is an order of magnitude greater. Yes, each entry only takes 30 seconds to create and fire off, but it's something that has to be done or else the whole concept of currency is lost - looking at someone's Twitter or Jaiku account and seeing that the last entry was a week ago completely ruins the concept.

With a traditional web site, updates can be every month and noone will think it odd. With a blog, anything less than once a week is a bit weak. With a chatter-type account, several entries a day are a realistic bare minimum. And while this seems fine while there's novelty in broadcasting your presence, it'll quickly become a real bore after a few weeks or months.

However, I should qualify this opinion of the two services by expanding on the possible 'exception' referred to earlier. There might be times, such as when at computer shows or conferences, when you're trying to keep track of a number of friends, colleagues and speakers, all of whom are tech-literate and chatter-enabled, when such services might be useful, in addition to the usual voice and SMS communication. I believe Ewan's got a podcast and editorial lined up on this very subject... watch this space.

Maybe the likes of Twitter and Jaiku are a matter of personal taste, but I can promise that you will never, ever be able to subscribe to a chatter channel in which I detail my everyday movements: