So, you've got a 332 MHz top-of-the-range smartphone from 2007 with 3D graphics acceleration hardware and a 16 million colour screen. What do you do with that? Obviously, you'd use it to emulate 8-bit home computers and consoles from 1982!

Better get this out of the way: this article is not for everyone. If you're not interested in computers or games consoles from the 1980s, you probably won't want to read what's coming up. Instead, you might want to check out the article on using the N95 as a gaming system with modern S60 games.

(sound of huge rush for the door)

Okay, here's the big news - if you install a 1980s computer or console emulator on the N95 (or N93/N93i), attach it to a television, and then connect it to a Bluetooth keyboard, you will end up with something that's pretty similar to the real thing. This is probably easier to explain in pictures, so take a look at these: 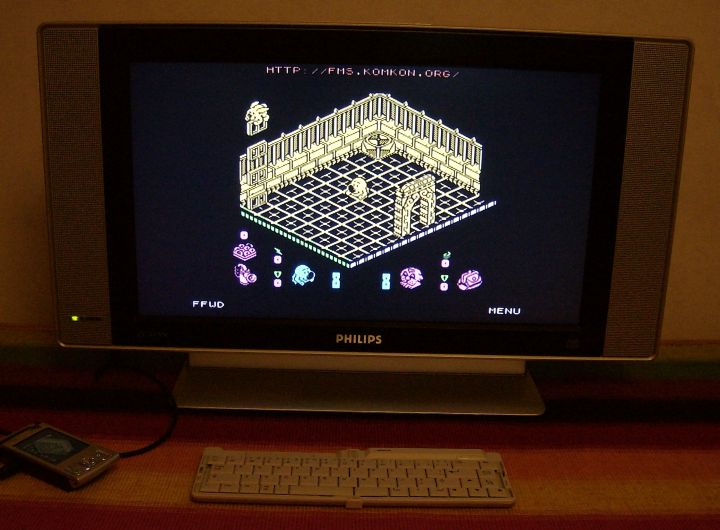 Ah, this brings back some memories... The Sinclair Spectrum was the best-selling games system in 1980s Britain, and continued to be commercially supported until the early 1990s. The World Of Spectrum archive lists 7000 games, 1700 text adventures and 2000 utilities as released for the Spectrum. It came with a version of BASIC built in and a programming manual, so people could not only play games but write their own. Many UK developers and publishers including Rare and Codemasters started out writing games for the Speccy, and in those days it really was possible for "bedroom coder" teenagers to make it big by sending in their games to publishing houses.
Anyhow, enough nostalgia! You might like to know is that the Bluetooth keyboard works with the Speccy emulator, which not only means you can use the "redefine keys" options in games to your own liking, but also means you can play text adventures (aka Interactive Fiction nowadays). Sadly you can't buy rubber-keyed Bluetooth keyboards, and I wouldn't advise trying to make your own.
One other tip about the Speccy emulator: the options are spread across TWO menus, not just one. One menu is accessed from the right blue soft key, and you can get to the other menu by pressing the green dial/send key. You'll need to access the second menu in order to turn off the screen zoom, so you can get the more authentic picture as seen in these photos.
Here's the classic, not to say slightly infamous, adventure Behind Closed Doors (don't forget to visit the developer Zenobi's website): 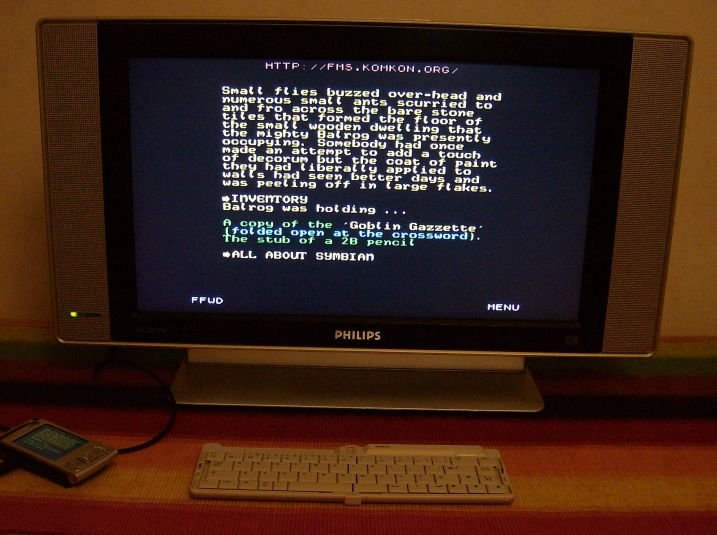 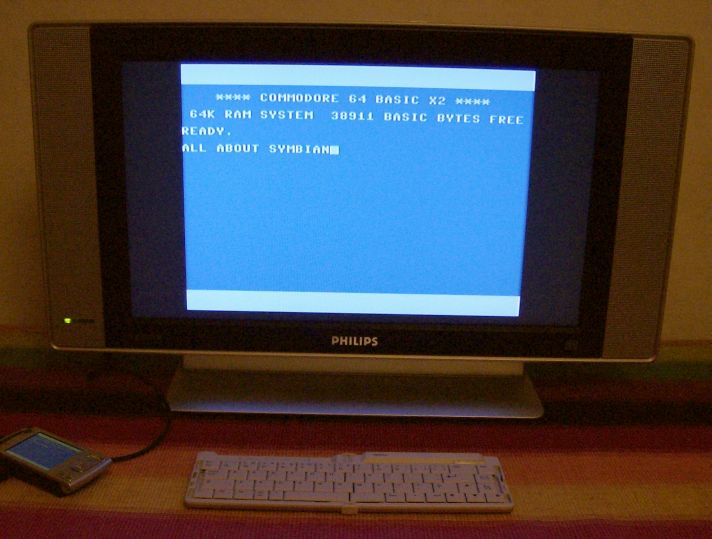 I'm sure this image will bring back memories for C64 owners. It was the most popular 8-bit computer of all time, and in terms of single models the original C64 was the most popular computer of all time. The Commodore 64 was the most popular gaming system in 1980s Continental Europe and became such a strong brand that there are still gaming computers being made using the name.
Before you get too excited though, the emulator used in the picture above is still in Alpha stage and isn't available to the general public. The author (who has also written freeware versions of Frodo for earlier S60 and S80 devices) will send you a copy of the Alpha if you make a donation of any size towards its development. You can find all the relevant information on his web site.
Here's Frodo running the Jeff Minter C64 classic, Attack Of The Mutant Camels: 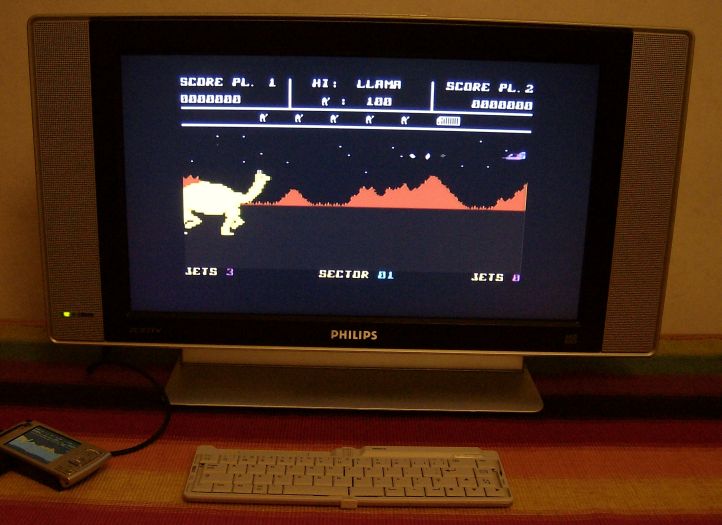 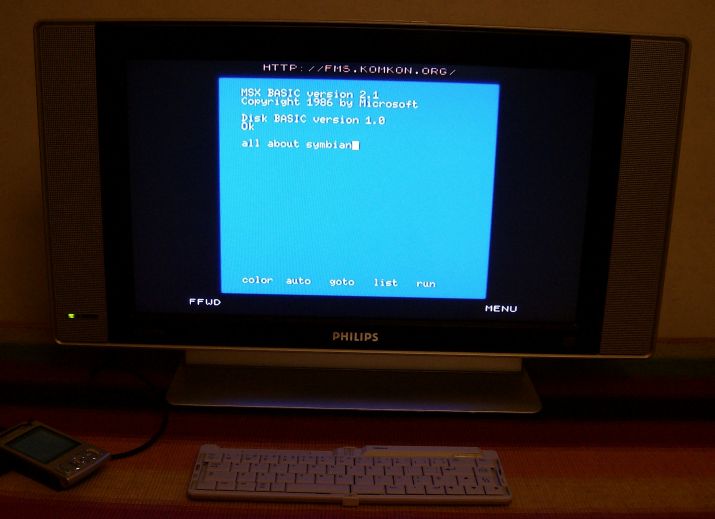 The MSX computer standard was supported by a consortium of mainly Japanese electronics companies, and was an attempt to create an 8-bit computer standard. As you can see from the picture, it had a version of BASIC provided by Microsoft, and thanks to the newfangled internet you can see Bill Gates proclaiming the coming success of MSX (along with Sir Clive Sinclair saying it's a load of rubbish).
MSX was extremely successful in Japan and South Korea, but failed to catch on in Europe or America, where other 8-bit standards ruled the roost. Consequently, most MSX software is in Japanese, with relatively few European or US releases. Its main source of interest to non-Japanese gamers is that many famous Japanese games franchises started out life on the MSX, including Metal Gear and Bomberman.
ColecoVision (1982) emulated by ColEm for S60 3rd Edition 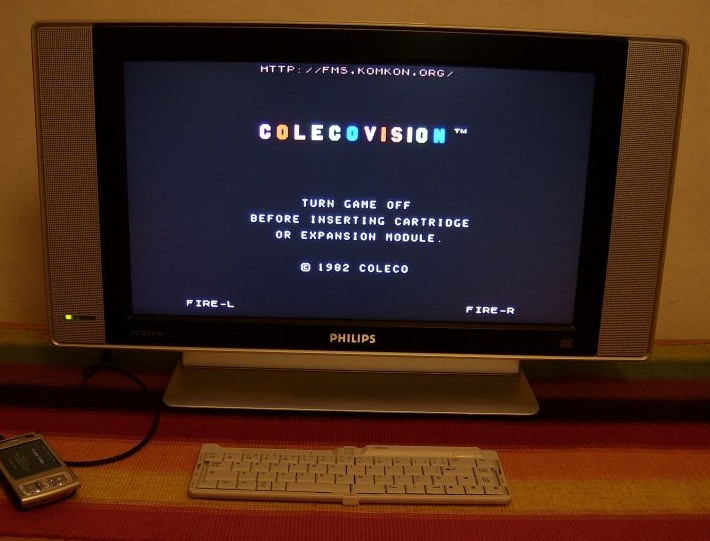 The ColecoVision was one of the first big-selling games consoles in America, and back in 1982 it looked like it might have a bright future alongside its rivals the Intellivision and Atari 2600. Unfortunately in 1983 and 1984, for reasons that still aren't totally understood, the bottom fell out of the US console game market, and ColecoVision vanished along with most of the American gaming industry.
The US demand for console gaming hadn't gone away though, and the void was soon filled by the...
Nintendo Entertainment System (NES) (1985) emulated by iNES for S60 3rd Edition 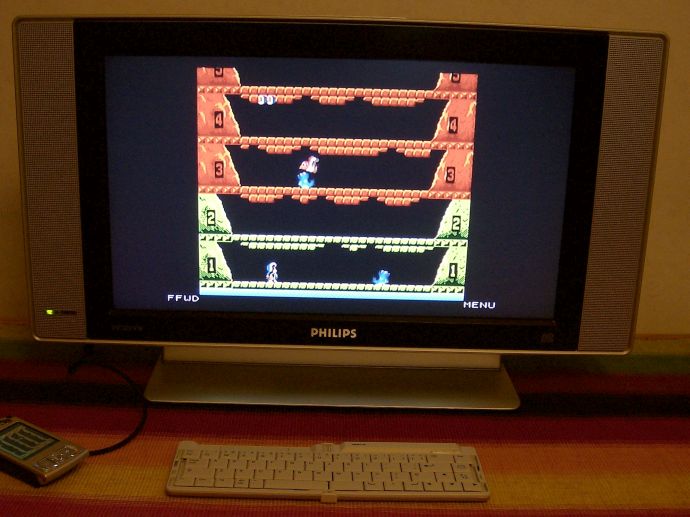 The NES was the American version of the Japanese Famicom, Nintendo's first ever games console released in 1983. It was released in the US in 1985, in the wake of the huge American video game crash where almost every US games console and console developer simply disappeared due to a massive and unexpected collapse in sales.
America's loss was Japan's gain, and the US video game scene was soon in love with Mario, Link and dozens of other Japanese franchises that continue to dominate American gaming to this day.
The NES was never as successful in Europe, mainly because Europeans were more into computer games than console games during the 1980s (see the C64 and Spectrum above).
Sega Master System (1986) emulated by MasterGear for S60 3rd Edition 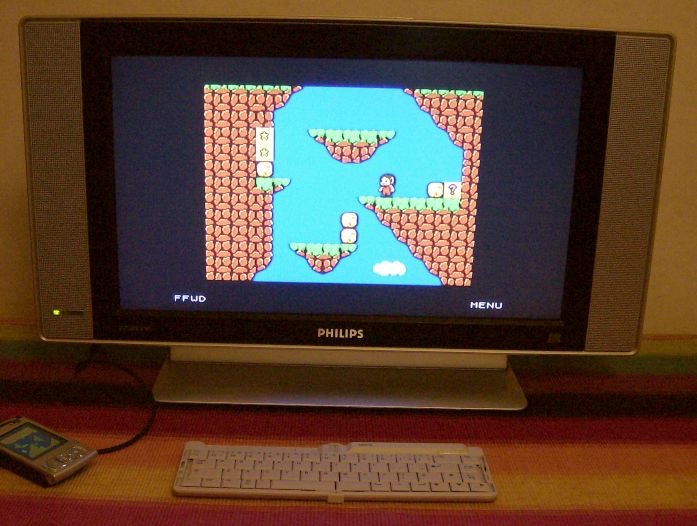 The Sega Master System was the Pepsi to the Nintendo NES's Coca-Cola. It was technically better but never sold as well, and in America it was practically wiped out by the NES for various reasons, including some rather dubious business tactics by Nintendo. However, it had a significant following in Europe, and in Brazil it was so popular that it continued to be made there under official licence until 1998, with unofficial versions still being made after that.
Sega Game Gear (1990) emulated by MasterGear for S60 3rd Edition 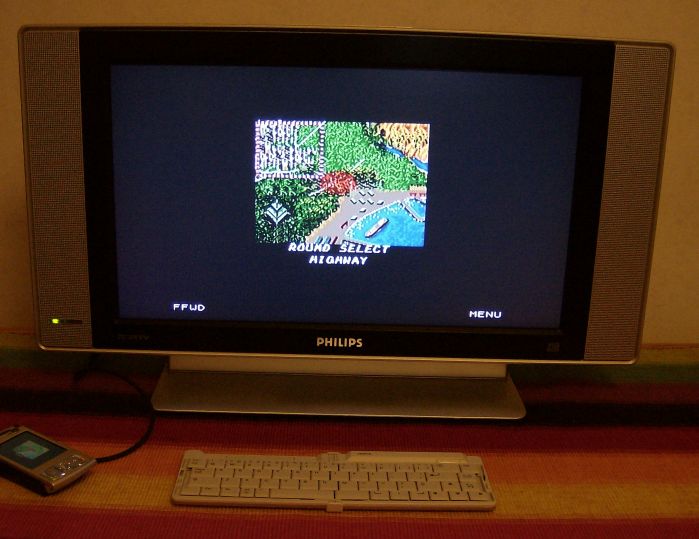 The Sega Game Gear was intended as their answer to the Nintendo Game Boy. It was essentially a portable Master System with a lower resolution and more colours on-screen, so it had many Master System games ported to it, and you could actually play SMS cartridges on the GG using a special adaptor.
Unfortunately the GG used up batteries far too quickly thanks to its backlit colour screen, and despite being technically superior it was never as popular as the...
Nintendo Game Boy (1989) emulated by VGB for S60 3rd Edition 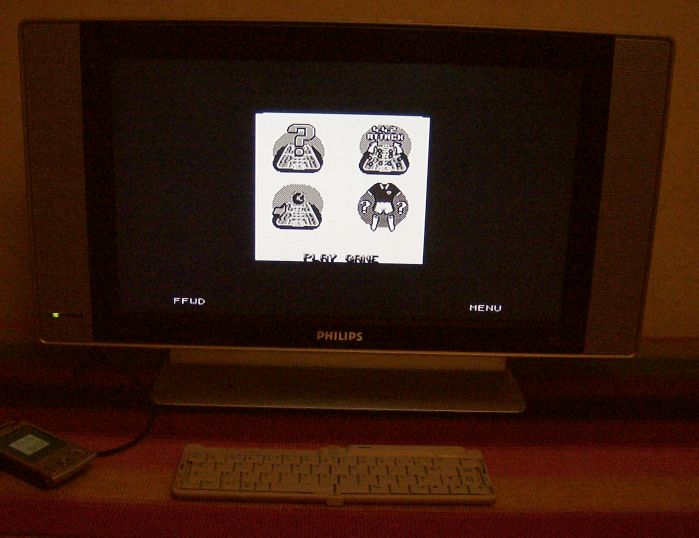 Perhaps the least appropriate use of the N95's TV Out feature is to emulate a handheld console with a tiny black and white screen, but at least this photo shows that it's possible! :-)

The main drawback of emulation is that it is, by its nature, unofficial and unsupported by the companies that made the hardware and software. In most cases, those companies simply don't exist any more, and the entire burden of continuing their legacy rests on the retro fans who have fond memories of loading a game from cassette or typing in a BASIC program listing. The upshot of all this is that you shouldn't expect emulators and software files to work all the time. In fact, it's extremely common that they don't work, either because the emulation is imperfect, or because the software file is corrupted, or because the file is in the wrong format, or a combination of all three.

A problem more specific to Symbian S60 systems is the sound. The authors of the emulators above both said they had trouble with emulating music on the Symbian S60 3rd Edition platform. While individual sound effects sound okay, the timing of sound in music is a problem, with many emulated tunes sounding mixed up as different voices in the tune go out of sync. The S60 API which relates to emulating sound was described by one author as "jittery". Hopefully a way round this problem will be found at some point as new and updated emulators appear, or perhaps a less jittery API will be released in future versions of S60.

And, as was mentioned in the TV Out modern gaming article, it would be nice to see a Bluetooth joystick or joypad made available, it would enhance the gameplay a great deal. Older games systems usually used digital joysticks so they could be very easily replaced by something that used the same technology as Bluetooth keyboards. Having said that, games on computers like the ZX Spectrum and Commodore 64 were usually designed with the keyboard in mind as joysticks were optional extras. The modern day Bluetooth keyboard really adds to the nostalgia trip when you find yourself once again being asked to define the keys you want to use, once again alternately pounding O and P to take part in some electronic sports event, and once again typing in commands to play text adventures.

...but let's look on the bright side

Whatever you emulate, and whatever you emulate it on, you may find that a game won't load at all, or will load but misbehave. However, sometimes you'll get something that works just as you remember it (or close enough), and then, especially if you're playing the game on a real TV, the memories will come flooding back. Those are the moments that retro fans crave, and they're the reason people go to such trouble to recreate obsolete hardware from 25 years ago. It's the closest thing that a gamer or computer user can get to a time machine.

Emulation isn't for consumers or early adopters or technofiends, it won't influence anything, it doesn't look impressive and it has little commercial value. It's for people who want to remember the good old days of their youth, which is perhaps something that we all want to do from time to time.

A word about emulators...

Emulation of old games is not as easy as it sounds. An emulator doesn't just run old games, it also simulates every component of the system that the game was written for, with every chip and BIOS recreated in software form on your modern computer. This is why emulated games are usually about two or more generations behind current systems, because current systems usually have to be that far ahead in order to emulate the older systems properly.

The reason the European version of the PlayStation 3 can't run a lot of PlayStation 2 games properly is because the Euro PS3 tries to run them entirely through software emulation, a tall order for a system which is just one generation ahead of its target. The US and Japanese PS3s get round this problem by including a miniature version of most of the PS2 hardware, so they don't have to do much emulating at all. Consequently, US and Japanese PS3s have almost 100% PS2 compatibility whereas European PS3 owners have to make do with something around the 65% mark.

Filed: Home > Features > TV Out on the Nokia N95 - Part 4: What retro computers have become?