Nokia's E61 had the Finns in a tizz, what with Symbian OS 9.1 and a brand new (for them) form factor. It's clearly aimed at the competition, so how does it look at this stage of its development? Ewan finds out. 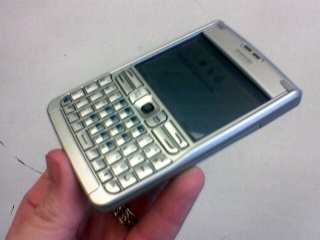 Most people are going to look at the Nokia E61 and think one of two things. Either “Ooh look, Nokia have a made a Blackberry” or “Ooh look, Nokia have made a Palm Treo.” And there’s no doubt that this Series 60 devices is by far and away the most non-phone phone design to come out of the Nokia labs. Given that the form factor is present in other devices though, it doesn’t seem as radical as it could be. It’s got all the requisite bells and whistles, with Wi-Fi, GPRS and 3G connectivity, and expansion is through a mini-SD card. It’s also nice to see that infrared is present on the device as well. It may be getting a bit old-hat, but there are a lot of legacy devices in enterprise that are more than happy to talk over IR instead of Bluetooth.

The features that everyone are probably going to be wondering about are the screen and the keyboard. Let’s start with the screen. It’s got the same sort of quality and pixel pitch as the previously reviewed E60 devices , and runs at 240x320 pixels – a standard size on Pocket PC’s for many years.

One of the benefits of S60 version 3 is there’s no hard and fast limit to the screen resolution. The principle of Symbian OS splitting the interface from the program code (and as with all the Exx phones, Nokia are running OS 9.1 in the E61) means that devices like this can easily be accommodated with little changes. The firmware on this preview E61 was the basic S60 v3 suite (similar to the E60) and it’s obvious that there are a few things that need work on to take advantage of the full width of the landscape-orientated screen. Of course, with a release date expected in Q2 2006, I’m sure all this is going to be optimised further. But even in this ‘ported’ mode the E61 is a pleasure to work in, and to finally see more than three emails in an Inbox on a S60 device is enough to convince me that the UI team are going to finally crack a lot of my personal bug-bears on the S60 interface with the E61. 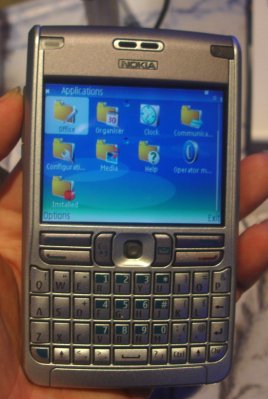 Below the screen is the keyboard, and, while I’m in two minds over this, it’s obviously a design choice to target the mobile executives brought up on the push email phones from Research In Motion. The keyboard, while nowhere near as good as that on the 9500 , does the job well. The call and hang-up buttons, along with the left and right soft-keys are well placed and easy to use.

But there’s a difference in keys like these that have the occasional press, and a keyboard where you’re hitting lots of keys one after the other. Because of the size and the physical distance between the keys the E61 isn’t going to be winning any speed typing awards. Long term PDA users will return to cradling the device and using two thumbs on the keypad, while others will use a ‘two or three fingers of one hand’ approach. Given that the majority of use of the keypad is going to be for SMS, returning mission critical emails, and simply acknowledging others with a quick ‘I’m out, will write more when I get to the office’, the keyboard is more than up to the job it’s designed to do. 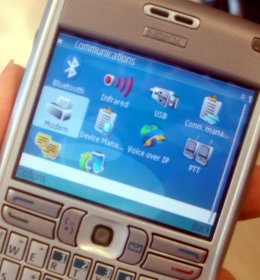 My only problem is that the delete and enter keys are right next to each other and it’s very easy to hit the wrong one. On the flip side though, there are two shift keys (one on each side) which is useful. Long term Symbian users will be delighted to realise that the ‘vulcan nerve pinch’ of ctrl-shift-fn-k (using the char key instead of fn) acts as a kill feature on the active thread. It’s something that’s been undocumented in Symbian OS for a long time, and can prove useful, so it’s nice to see that it’s still present in OS 9.1.

Build quality and size on the E61 is pretty much determined on the size of the keyboard and screen. There’s no camera on the unit, and the chosen wedge shape does look pretty strange. While I was worried that it would be a bit top-heavy in use, this isn’t the case. The moulding, especially at the back of the unit, means you’re holding the unit just above the balance point. So while it looks strange, it does work in terms of physical design.

The E61, I think, finally crosses the line between smartphone and PDA. Whether companies and sites are going to pigeonhole the E61 as a super smartphone or a PDA with a phone attached is immaterial. What we have here is a portable computer, which has a huge range of built-in applications and can be extended by third party developers -Nokia are no longer simply a phone manufacturer.

The keys to the E61 are two-fold, and both are based around the business culture of instant (push) email. How well this works, and how effective Nokia are at marketing this device over other push and Windows Mobile devices, is crucial. It may well have over the air connectivity to MS Exchange via Active Sync and the Blackberry Connect service, but IT departments will need to be convinced to move away from solutions they are familiar with, for any success to be seen with the E61. 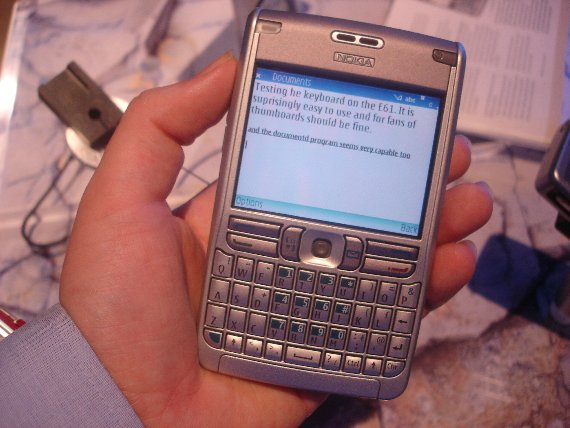