How to update the firmware on the Nokia 5800 XpressMusic 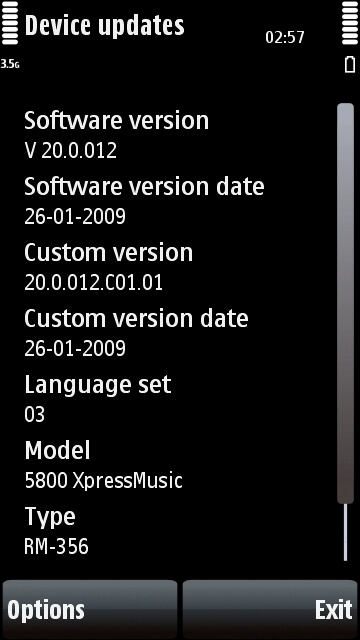 How to update the firmware on the Nokia 5800 XpressMusic

Modern electronic devices contain "firmware", which is a set of instructions and programs that tell the device how to behave. Device manufacturers often release updated firmware versions which fix bugs and sometimes add new features. These updates are free, and can usually be downloaded onto the device from the internet.

It's a good idea to regularly update the firmware on your phone, because the updates will fix problems, make the phone run more smoothly, and sometimes add new or updated functions.

For some weird reason Nokia has decided to refer to firmware as "software", which is a bit confusing as software normally refers to computer programs in general. However, we're going to use the word "firmware" because that's what everyone else uses when talking about the programs and instructions built into devices.

How do I check if there's a firmware update available for my phone?

1. On the main standby screen, press the keypad dialler icon and enter the number *#0000#

2. Select "Options" and then "Check For Updates".

Before you update the firmware, create a phone backup!

Before you update the firmware on a phone, you ought to first back up the data and settings on your phone. It's very easy to do, and you can find out how in our tutorial on 5800 backups:

How to update firmware directly on the 5800

Probably the easiest way of updating the 5800's firmware is to use the OTA ("Over The Air") method, where the phone updates itself using its own internet connection. The big advantage of this method is that it doesn't require a computer at all.

The 5800 supports User Data Preservation, which basically means your own settings and data are left untouched during the update process. However, it's still a good idea to back them up before the update just to be on the safe side.

Your phone may behave strangely during the update, it may display various test screens, and you may not be able to take calls either. The whole update process should take a few minutes.

1. Make sure the phone has been fully charged before you start the update. THIS IS VERY IMPORTANT!

2. On the main standby screen, press the keypad dialler icon and enter the number *#0000#

3. Select "Options" and then "Check For Updates".

4. Select "Yes" and choose whichever internet access point you want to use. Wi-Fi/WLAN connections are usually best as they're fastest, cheapest and most reliable, but you can use the phone network if you want to.

5. If an update is available, follow the on-screen instructions to install the update

How to update firmware on the 5800 using a Windows PC

If you have a computer running Microsoft Windows, you can use Nokia's Software Updater application to install firmware updates on the 5800. This tends to replace the phone's entire firmware instead of just updating it, which takes a lot longer but can also be more reliable.

You can download Nokia Software Updater from its official website by clicking on this link. Install the application on your computer, and then run it. Follow the on-screen instructions precisely and the update should work (make sure you do follow them precisely though, don't skip any steps). You'll need your 5800's microUSB cable to do the update through a PC.

I did the update and now I'm getting errors!

In theory firmware updates should smoothly replace everything that needs replacing, but in the real world the update (especially using the OTA process) can cause a few glitches to appear. If you used the OTA update method for updating the firmware, you may want to try using the Windows PC method instead.

Another possible solution is a "settings reset", which replaces some of your own settings with the default settings for the new firmware version.

The advantage of this is that it can get rid of problems caused by a firmware update. The disadvantage is that you may have to re-enter some of your own settings manually after doing the settings reset.

What if I still can't get the update for some reason?

If you can't get the firmware update through OTA or your computer, you can take your 5800 to a local Nokia-authorised repair centre and they will install the latest firmware free of charge. All Nokia phones come with a 2 year guarantee in Europe, sometimes a 1 year guarantee elsewhere, and you are entitled to get free firmware updates from a repair centre throughout this period.

You can find your local authorised repair shop by going to www.nokia.com/support and choosing your location, then choose the "Repair" tab near the top of the screen, then choose your local area to see a list of "care points" near you.

Note that repair shops aren't necessarily Nokia-owned, they're usually third party companies who do work on behalf of Nokia, so for example in the UK the Carphone Warehouse will repair Nokia phones on behalf of Nokia.

Why do some 5800 owners get a firmware update before others?

Even a single phone model can come in many different variants, each with its own firmware. For example if you buy a phone from a phone network operator, it may have a custom firmware version.

When a firmware update is released, it's normally released first for unbranded unlocked phones, with all the network-locked variants released after that. Some network operators may not bother to do updates for their variant, in which case anyone who's bought a phone locked to that network is stuck with old firmware even when the manufacturer has created new firmware.

If you want the best chance of getting the latest firmware, it's strongly recommended that you buy an unlocked unbranded phone (aka "SIM-free"). They cost a bit more up front, but they're cheaper and more reliable in the long term, they let you use SIM cards from any network worldwide, and they're also a lot easier to sell when you want to buy a new model.

Filed: Home > Features > How to update the firmware on the Nokia 5800 XpressMusic