Have you seen what budget phones can do now?

Have you seen what budget phones can do now?

Without much publicity, Nokia recently released a low-end budget phone called the Nokia 5000, which is aimed at emerging markets (i.e. poorer countries) and has a launch price of about 90 euros plus taxes, with the price probably dropping closer to 50 or 60 euros over time.

Also without much publicity, Nokia has started bundling Opera Mini with even their lowest-price models, including the 5000. But they haven't stopped there: Nokia have also recently announced that the WebKit open source browser core (as used by S60's browser and the iPhone's browser) will be included in the upcoming 6th Edition of the Series 40 platform.

Why does this matter? Well, it's easiest to express this with a picture: 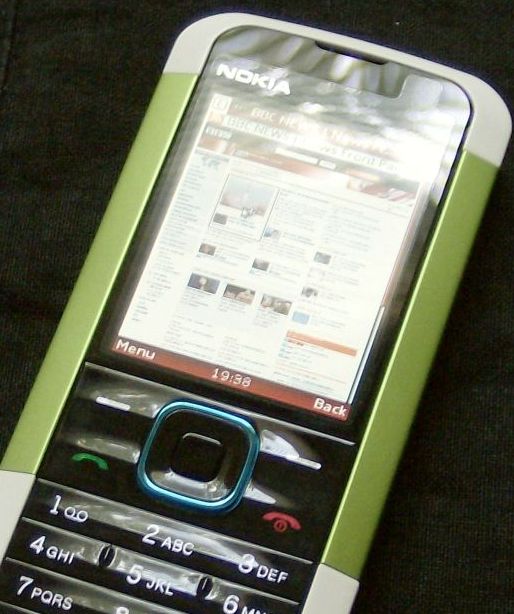 While the 5000's Opera Mini browser isn't quite as good as the S60 browser, in practical terms it's amazingly close, and the 5000's QVGA screen displays sites very much like an S60 device. When the WebKit browser makes its debut on S40 later this year the technological gap will be even narrower.

With all the talk of which phone is best for internet browsing, the question of price has been sadly neglected. Silly headlines like "New $199 iPhone" ignore the fact that the new iPhone actually costs about $600, with the $199 headline number just being the first installment of a long series of large monthly payments. Technology writers who dislike the iPhone and prefer alternative devices seem to just go for other expensive models like the N95, which also cost $600 or a long series of large monthly payments.

Absolutely no one talks about budget phones as web browsing devices. But, considering the photo above, perhaps they should?

Even if tech writers don't acknowledge it very often, most people buy ultra-cheap phones, often literally the cheapest phone in the shop. It's mainly because most people simply can't afford anything else, but even those who can afford it often still plump for the cheapest one anyway. It's good enough, so why pay more?

Price is not just a key feature, but arguably the most important feature a phone can have, and cost probably has more effect on purchasing decisions than anything else.

Just how quickly are budget phones catching up with smartphones?

Over the past few years many people have observed that ordinary phones and smartphones are growing closer together, but not many have noticed the incredible pace at which this is happening.

For example, this is how close Nokia's smartphones and normal phones are in many key areas of mobile technology:

This isn't the whole story of course, S60 has the important ability to run more complex native applications, and multitasking lets S60 run many apps at once. There are also certain apps and services, such N-Gage, which are S60-exclusive, though Nokia Music Store, Nokia Maps and Ovi Share are starting to appear on S40 models too.

It's also worth pointing out that not all Series 40 models are budget phones, most of them are actually mid-range in terms of price. However, once a feature appears on a mid-range S40 device, it seems to migrate to the cheapest phone models fairly quickly because they too use S40.

What happens when the budget phones catch up?

This view is mistaken because progression like that can't go on forever, people don't generally need technology to develop beyond a certain point. How many people would have any use for a camera greater than 10 or 20 megapixels?

Eventually there won't be any room for high end phones because budget models will do everything that ordinary people require of them. That might sound depressing, but it will mean that high end features will be used by ordinary people instead of just rich technophiles, and that's when we'll see whether these features are actually capable of changing the world:

- If everyone has a phone with satellite navigation, how will people see the world around them? The writer Will Self observed that Londoners seem to live in the tube map (the underground railway map) because everyone uses the tube to get around. If everyone uses their phone to get around, will we start to see the world in terms of points of interest, and discover more about our neighbourhoods because of the diligence of the mapping companies? Or will those who control the maps start to exert undue influence over our view of the world?

- If every phone has a TV-quality video camera and a mobile internet connection for uploading video, how will that change the recording of history? What would have happened if President Kennedy had been assassinated while surrounded by people using such devices? As many have observed, video provides not just a metaphorical viewpoint but a literal viewpoint, you see exactly what the person saw at the time, and direct uploads from the phone to the internet would make censorship much more difficult too. It would become extremely easy to convey to the world what actually happened at an event.

- If every phone has a high resolution screen, a TV Out feature, and compatibility with a keyboard and pointing device, will anyone bother buying standalone computers? Cameras, calculators, dictaphones, pagers and many other devices have been pushed aside by the mobile phone, dedicated music players are on the way out too, and perhaps computers will be next. For perhaps most of the world, a mobile phone with TV Out may be the first and only computer they ever use.

It'll be very interesting to find out the answers to these and many other questions, but they will only be fully answered when these features become standard on budget phones.

Expensive phones are like an enormous test phase, but budget phones are the true launch pad for a mobile technology.

Filed: Home > Features > Have you seen what budget phones can do now?