The Nokia 5320 XpressMusic has finally gone on sale, and we've got hold of one of the first retail units. This is the actual phone as it is now in the shops. The review should be coming soon, but hopefully this will keep those interested happy until then.

(NOTE: This article is just the preview, click here to read All About Symbian's full 5320 review.)

The Nokia 5320 XpressMusic has now gone on sale in Finland with a retail price of 195 euros plus taxes. This makes it the cheapest launch price of any S60 device so far, and takes Symbian even deeper into feature phone territory. This is also apparently the first S60 device to be made in Nokia's Hungarian factory, which normally specialises in lower-end non-smart phones. (UPDATE: A reader advises us that this is actually the second S60 device from Hungary, the first being the 5700 XpressMusic.)

First Impressions of the 5320 XpressMusic

In no particular order, here are some of the things that stand out when you use the phone:

- It feels fairly light, it's 90g including the battery.

- The external speaker is mono but pretty good quality and very loud.

- Thanks to Feature Pack 2, the 5320 has "Standby Themes" instead of just one active standby mode. There are four large icons by default as the standby theme, the usual horizontal bar with smaller icons is also available, but perhaps best of all is a very nice vertical bar which acts like the Windows start button.

- The red finish is metallic, not matt. It arguably looks much better in real life than in photos.

- The soft keys, menu and C key are all in very annoying positions, very much like the layout on the 6120. It's difficult to press the soft keys at first.

- N-Gage isn't preloaded, but there is a direct link to download N-Gage in the Games folder, though N-Gage isn't yet available for the 5320. Presumably the N-Gage app will be added to future firmware versions.

- The music buttons are nice to press, much easier than on the 5300. The volume, power and camera buttons are also easy to press.

- The "music search" feature, which lets you search for an artist or track by speaking into the phone, seemed to work with the built-in tracks, but this will be more closely examined in the full AAS review.

- The headphone socket really is 3.5mm, which is great.

- The menu structure is completely perverse: there's a prominent Office folder with lots of business-related applications all in one place, but there is no Music folder and the music-related applications are scattered all over the place. It's as if they thought they were designing the menu for Eseries instead of XpressMusic.

Here are some photos of the sales package, this is the SIM-free unlocked European version. Sales packages may vary from region to region, and network operators may also change sales packages. 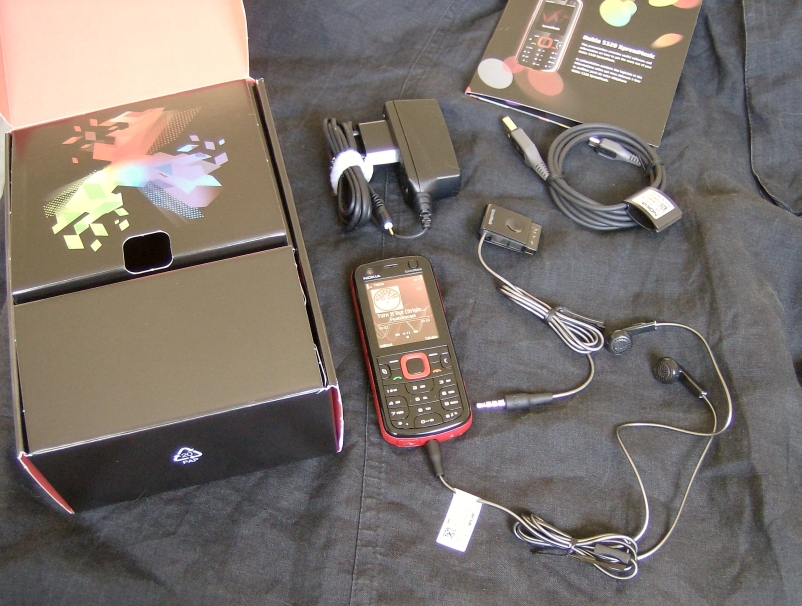 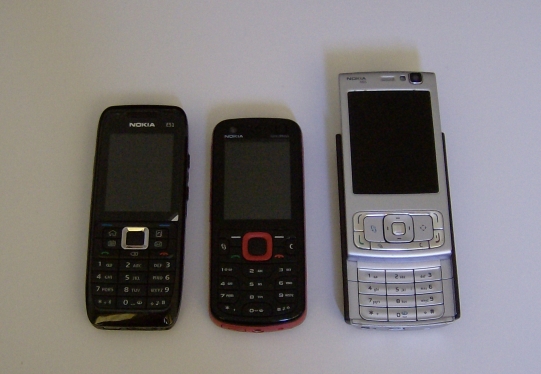 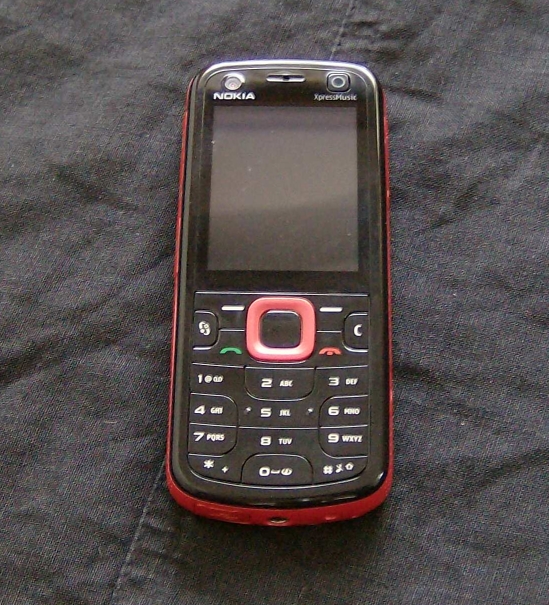 The 5320 itself. Apologies for the quality of the photo but the camera decided to misbehave today!

Note that the 3.5mm headphone socket and microUSB port (under a rubber cover) both on the bottom of the phone.

Also note the gaming button above the screen. This, together with the shoulder button, are designed for playing N-Gage games in horizontal mode. 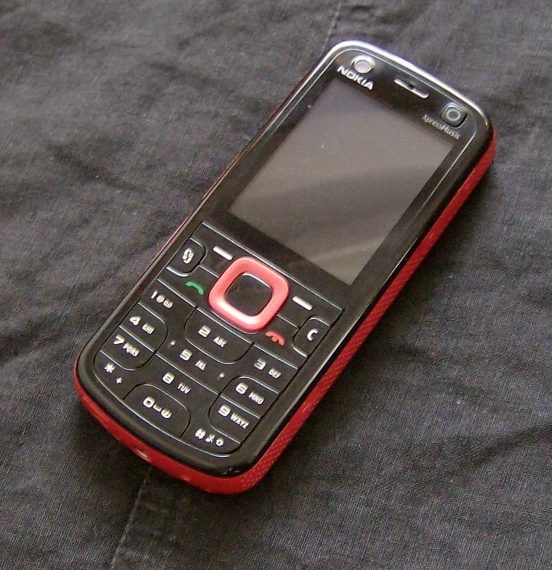 Another view of the 5320. One thing that you can't really see in the photos is the finish of the red colour, which is actually quite metallic. 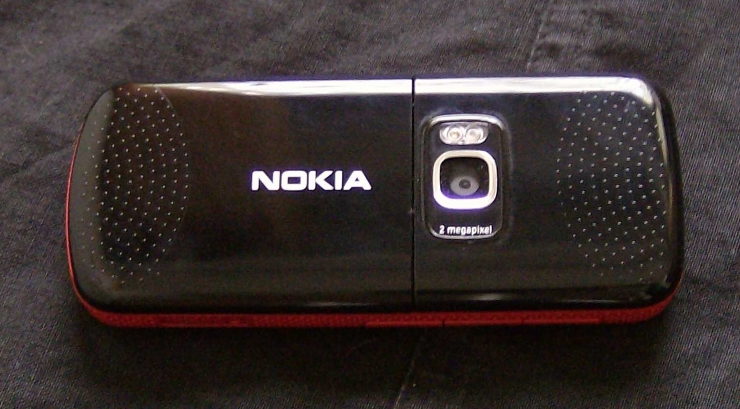 The back of the 5320. Note the grips to make it easier to hold horizontally, these are probably intended for gaming use as N-Gage will soon be available on the phone. 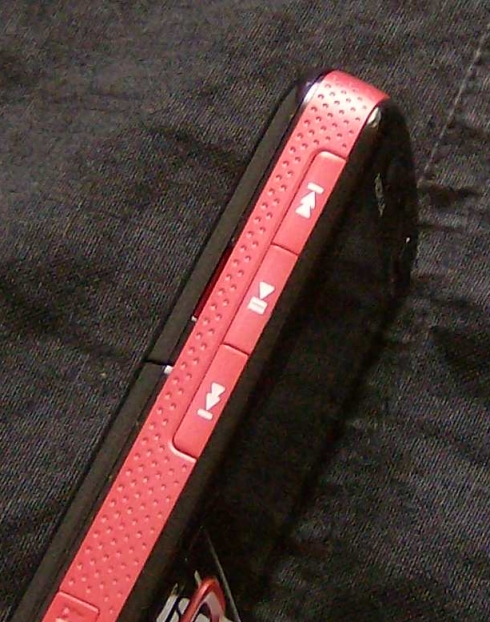 The 5320's built-in music controls on the left of the phone. They're positioned similarly to other recent XpressMusic-branded models such as the 5310 and 5300. The top music control also doubles as a shoulder button in N-Gage games.

The left side also has an external memory card slot, you can see the top of the slot door just at the bottom edge of the picture. 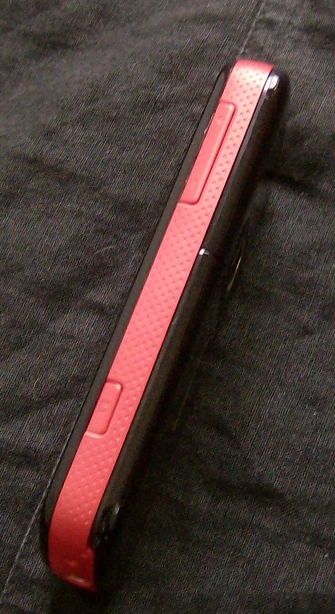 The other side of the 5320 has external volume controls and a camera button.