In part 1 of this series, Steve Litchfield looked at exposed camera glass on some phone models and investigated whether scratches really make a difference. In this, part 2, he investigates the pros and cons of LED/dual-LED/Xenon flashes in camera phones - which one should you be considering if imaging is paramount? Part 3 will investigate the fabled 'Megapixel myth' with an objective eye, and we're also planning on adding some extra technical camera-related articles later on, courtesy of AAS regular Dirk Snoyt. 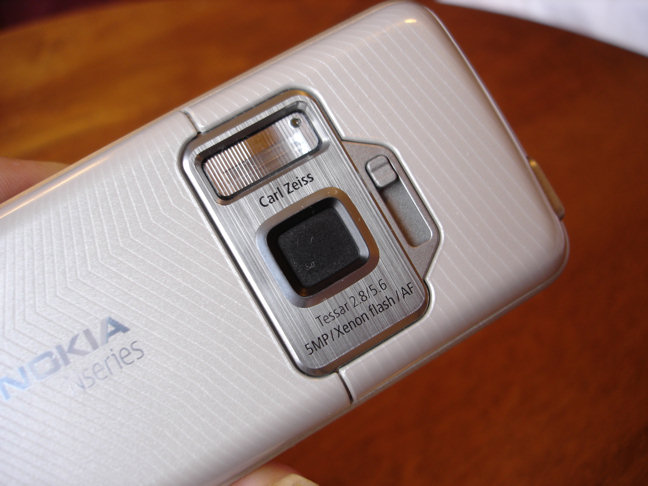 I realise this is starting to get into seriously specialist territory - I mean, we're talking here about the relative merits of the flashes used in the cameras in phones, for goodness sake - but the fact remains that imaging capability remains high on most people's want lists when considering what to buy next. And, as I often say, you only get one chance to take most photos - snap it with a device with an underpowered camera and you'll often be disappointed.

This applies just as much to the world of adults and kids parties, to pubs and clubs, to functions and gigs, as it does to that of glorious sunsets, beach and park scenes. In other words, you want to capture the moment just as much indoors in poor light as you do outside in great light.

Except that phone cameras are traditionally bad in low light conditions because of their small CMOS sensors - there simply aren't enough photons to go round and the end result is grainy, blurry photos. Many phones have LED flash, of course. This helps when your subject is around a metre away but increasingly disappoints beyond this range. To combat this, devices have started to appear with dual LED flash, i.e. twice the brightness, although as radiative energy falls away exponentially with distance, you don't actually get twice the range. Borrowing a technology from 'grown up' standalone cameras, a small number of top end phones now sport a 'Xenon' flash.

As you'll have guessed, the name comes from the element (a 'noble' gas) Xenon. A tube of the gas (illustration here) is electrically excited with a high voltage (many hundreds of volts) from a large capacitor and the de-excitation produces a high intensity flash, of the order of thousands of times brighter than a traditional LED flash but lasting 100 times less, typically less than a millisecond.

The net result is a much brighter flash for camera use. So, you might ask, why don't all phone cameras come with Xenon flash?

On the other hand, the advantages of using a Xenon flash in a phone camera are:
With disadvantages outweighing advantages by 5 to 2, you can see why manufacturers opt for LED flashes most of the time. But, for anyone really interested in ad-hoc low light shots, a Xenon flash is worth the extra power requirements and worth forking out another few pounds or dollars to obtain.
This being All About Symbian, I'm going to be looking at one of only three Symbian OS-based phones with a Xenon flash, the Nokia N82 (the other two are the Nokia 6220 Classic and Samsung G810). And I'll be comparing its low light performance to that of the LED-equipped Nokia N95 Classic and the dual-LED-equipped Nokia N79. Is doubling the LED flash good enough to get remotely close to Xenon flash in typical conditions? We'll see.

Here's a shot of the drum riser from my band. Replicating the lighting you'd get in a typical gig/club, the subject is about 2 metres away and quite poorly lit by artificial light. Let's see how the different flash specifications cope. Here's the photo from the Nokia N95, with single LED flash: 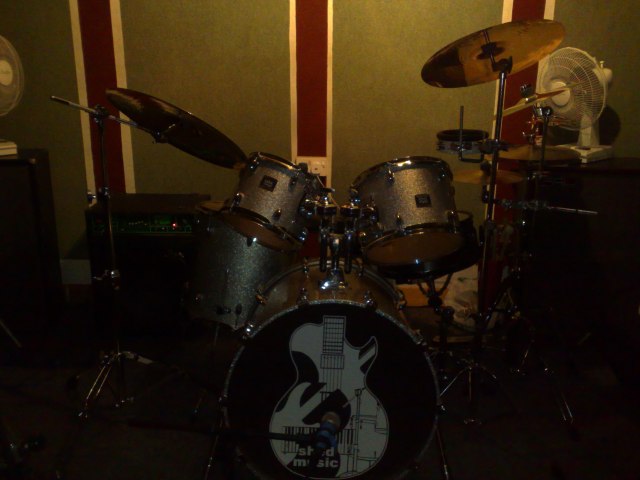 Naturally lit areas are picked up, but light from the flash might as well not be there at all. Overall, very unsatisfactory - if a LED flash unit was your only camera in your phone at an event, you'd be unhappy with most of the snaps.
Here's the result of the same scene shot with the Nokia N79, with dual LED flash: 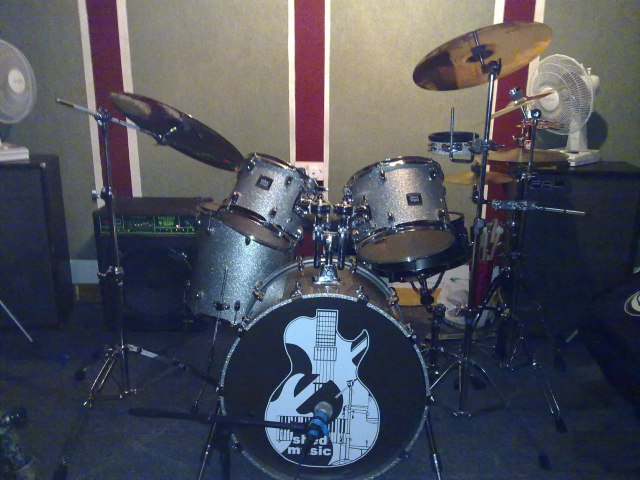 Much better, you can now clearly see the result of the flash and far more detail can be picked out. You still get the feeling, however, that the flash is struggling and that there doesn't seem to be illumination to spare.
Here's the scene, shot by the Xenon-flash-equipped Nokia N82: 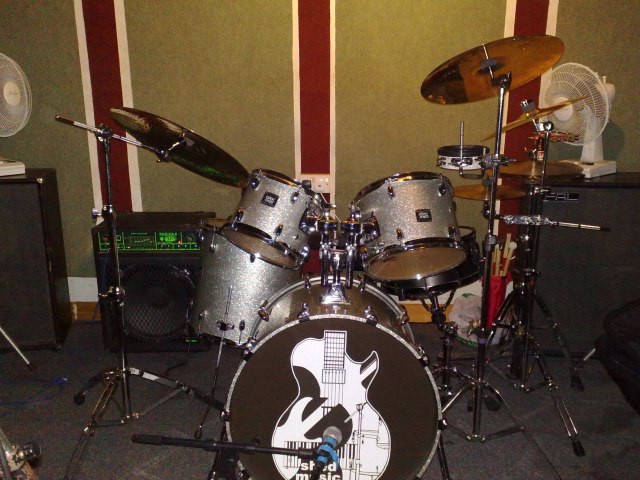 Far, far better. There are no dark corners, every detail can be picked out and the eye sees this scene as natural, or at least as natural as a flash-lit photo ever gets. There's no hint of struggling to 'see in the darkness'.

With the physics involved, any sensible amount of LED illumination will still need a reasonably long shutter time to get a pleasing 'exposure', with the result that anything moving fast becomes blurred. The same applies to a certain extent to any wobble in your camera hand. Here's a shot of a drummer, taken with the N95 Classic. Note the blurring on the drumming arm and stick, plus the blurring on the blades of the fan: 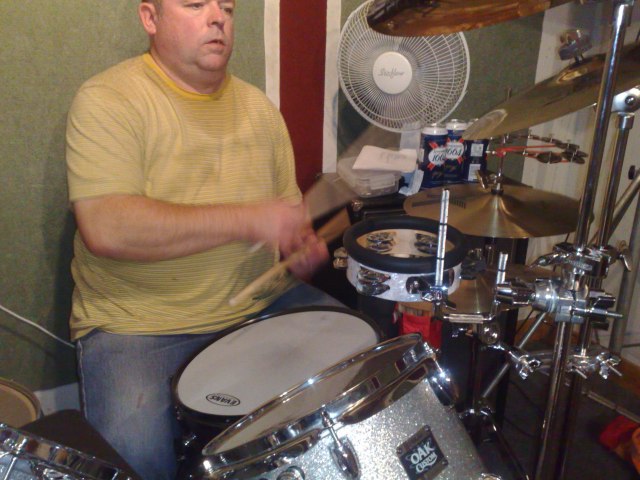 Now look at the same shot taken with the Nokia N82, with Xenon flash. The hairs on the drumming arm are crisp, the stick ends are crisp and the fan blades might as well be stationary: 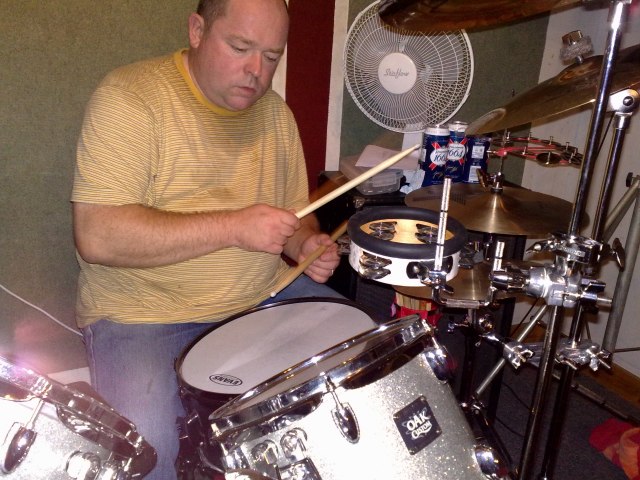 It's not all good news, of course, since the amount of light causes over-exposure of the closest part of the drums. Swings and roundabouts, etc.

Having then presented the pros and cons of LED/dual-LED/Xenon flash-equipped phones, the decision is, as usual, not really clear cut. If low light photos are common for you (an active night social life?) then having a Xenon flash on board really is essential, despite the hits on cost and battery life.
If flash-snaps are only an occasional thing then a dual LED flash will do nicely - I've hopefully demonstrated above how much better a dual LED unit is than a single. And it should be noted that technology is improving LED flashes all the time - I'd lay a safe bet that the individual LEDs in the N79's dual unit are each quite a bit brighter than the one in the Nokia N95, which in turn is a lot brighter than the pitiful LED in the N93.
Other factors, of course, include lens size and quality, camera glass protection, easy camera activation with a slide mechanism and prop-up stand, to pick some factors from Nokia's recent hardware. So it's not all about the flash technology used. But hopefully I've given you food for thought.
More in part 3 of this series, when I'll be examining the megapixel myth.
Steve Litchfield, All About Symbian, 18 Sep 2008
Bonus links:
Reviews: Nokia N82 - Nokia 6220 Classic - Samsung G810