It's an S60 version of Samsung's current camera flagship - but how does it compare to Nokia's equivalents? Andy Galpin and Steve Litchfield take turns with the device to investigate...

The arrival of the Samsung G810 in the All About Symbian office presented us with another opportunity to get a young writer in, a fresh perspective. Andrew Galpin (still in his teens) has experience of the G810's non-smart predecessor, the G800, and also extensive experience with the G810's main competitor, the Nokia N95 (classic), making him a good choice for summing up the new arrival. 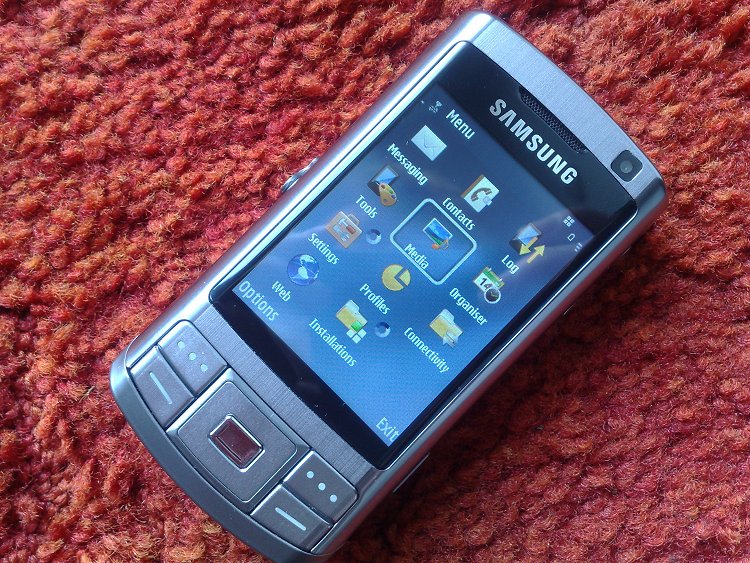 Samsung’s answer to the N95

The G810 is the sucessor to a highly successful 5-megapixel camera phone, the Samsung G800. This time it's a full S60 smartphone though, with new features ranging from built in WiFi and GPS navigation to TV output. It’s of similar spec to the popular Nokia N95 and is in direct competition to it:

The G810 is a silver slider phone made of a combination of aluminium and plastic, and when closed the 2.6” (compared to the 2.4” on the G800) TFT display takes up the majority of the phone, with a glossy D-pad running along the bottom. The D-pad, unlike regular smart phones (including the G800), consists of no Call or Hang up buttons; instead it has an unlabelled menu button (left) and a media player quick launch key (right - for easy access to radio, Music player and RealPlayer. This could take a big of adjusting for regular smartphone users, especially with the absence of an edit (pencil) key.

The left side of the G810 has (from the top down) a Power button, a 3.5mm jack and a microUSB slot, which can be used to charge the phone and to connect it to the PC (or Mac). The problem I have with the 3.5mm jack is that the cover sticks out from the side of the phone, making the G810 look ugly from the front.

The right side of the phone presents the volume keys, microSD card slot and the camera shutter button, for taking photos.

When fully open, the numeric keypad is revealed, along with the missing Call and Hang up buttons, with a cancel button between them. The repositioned buttons mean they are less convenient and harder to use, I don’t see why Samsung have moved them. The keypad is flat but the buttons are bigger than those on the N95 making them easier to press when texting. 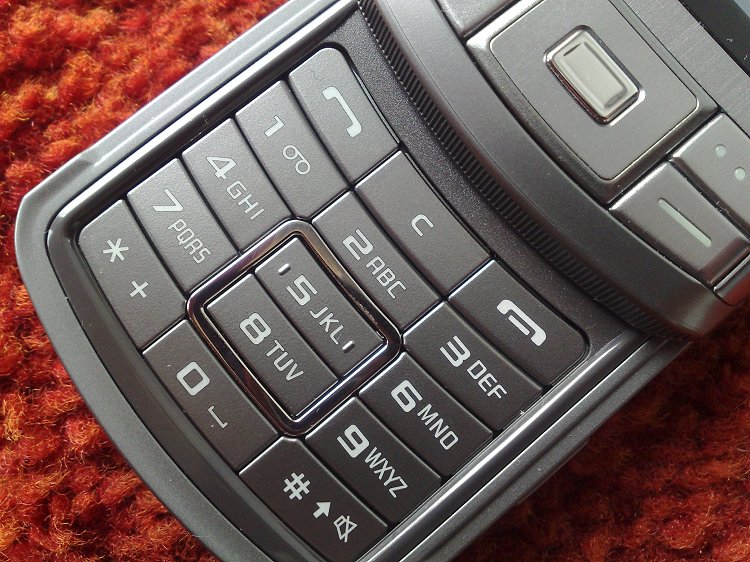 The back of the G810 looks great, with the 5MP camera (with 3x optical zoom and Xenon flash) hidden behind a silver aluminium panel which, when slid to the left, makes the phone look like a real camera.

Overall, the G810 looks great at first glance, but on closer inspection it’s a lot bulkier than the N95 and, when open, stands taller than Nokia's flagship.

Installing the battery at first is quite fiddly as the back cover is fixed on firmly; you need long nails to unhook it. 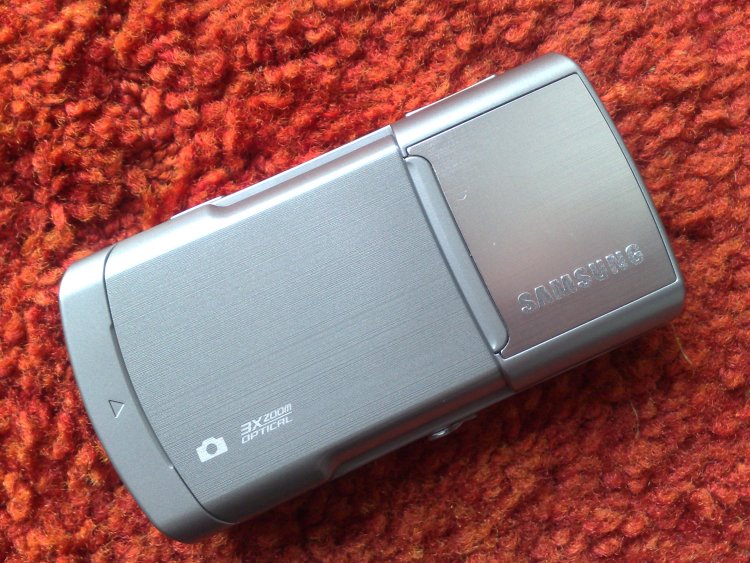 Running on Symbian S60 3rd edition with Feature Pack 1 and plenty of RAM, the G810 performs well, it runs smoothly with multiple applications running, unlike the N95 Classic which tends to slow down dramatically (this was fixed in the N95 8GB, of course).

The camera interface is similar to that in the G800 with only minor changes. Features include face detection, digital stabilization and WDR (Wide Dynamic Range), with the ability to use up to 800 ISO (double that of the G800). However, having the menu items along the top of the interface is, I feel, worse than having them along the side, as the N95 does. The overall performance of the camera isn’t as good as its competition, even with its fancy digital stabilization and face detection – in my experience the N95 takes better pictures. 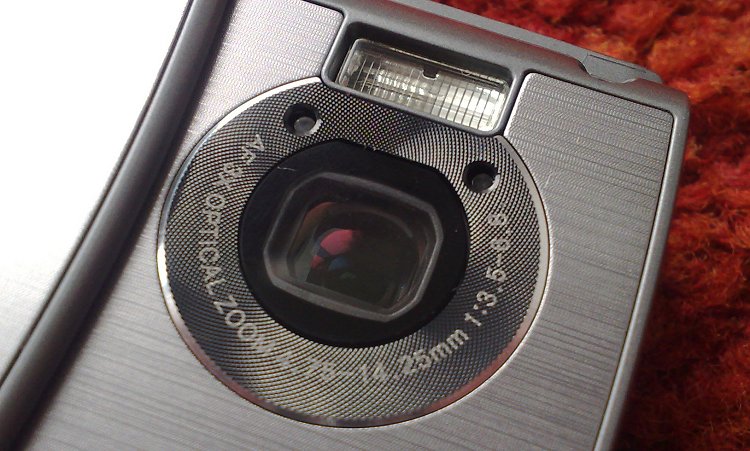 The battery on the G810 performed better than that on the N95, even though their average talk times and standby times are very similar (on average, 5 hours talk time, and around 295 hours of Standby). The battery performed well for occasional use (calls, text messages and music player), lasting about 3 days before needing a charge, though heavy users would properly run the battery down in a day and a half.

The 2.6” TFT screen performed well in both bright daylight conditions and in the dark, providing a bright screen with minimal reflection from the sun. Performance in the dark was especially good as the buttons are clearly lit. The screen’s the same size as the N95 classic, except that it's flat and so doesn’t collect dust in the corners, thankfully. It's smaller than the N95 8GB’s 2.8” display but nothing really noticeable.

Connections are managed slightly differently on the G810 - if you want to connect to a wireless home network you need to hunt through the connections to set it up before you can use it as an option when going online – unfortunately, there's no option to search for wireless networks when opening up the Internet browser, but this should be fixed in a future software update (hopefully – after all, it was added to Steve's i550w).

The G810 is a phone designed for people who lead a busy life and need a reliable device that will last, it has room for music (with a microSD card installed) and comes with some of the best headphones I’ve seen (or listened to). The 5MP camera is perfect for the occasional shot, but will disappoint real photo enthusiasts.

Thanks, Andy. That's a good summing up, although I'd like to add more detail, to the camera side of things especially, and to deliver my own verdict.

The G810, despite the presence of GPS and Wi-Fi, is really all about the camera – in the same way as the N95 and N82 – it really is the headline feature and so deserves to be tested to its limits. I took a variety of photos under various lighting conditions with both G810 and N95 8GB, making sure that positioning and lighting was identical in each case. I then blew up the centre of each photo to compare captured detail and colour, as shown below: 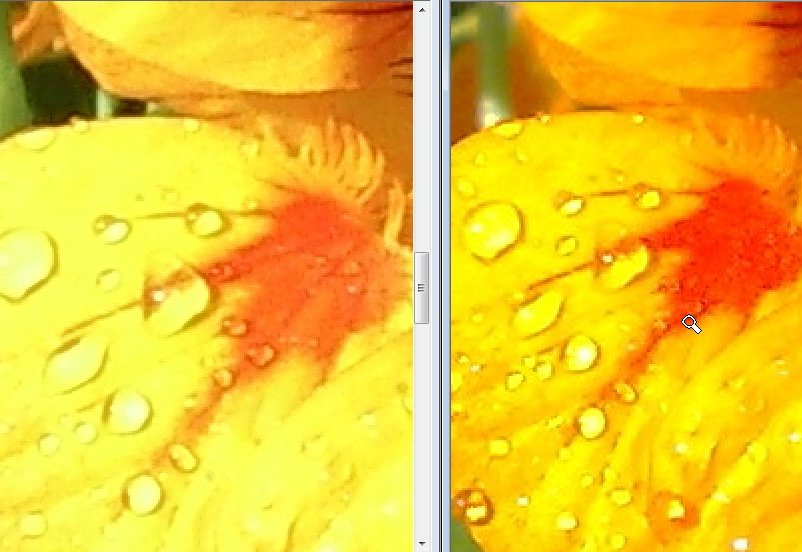 Extreme close-up of a nature shot in sunlight. On the right, the N95 8GB's colours and handling of light are slightly better, despite over-zealous edge enhancement

Here's another sunlight garden shot on the G810, click to enlarge or download the original photo, then see below for extreme close-up comparisons: 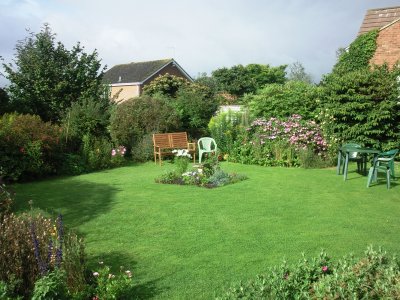 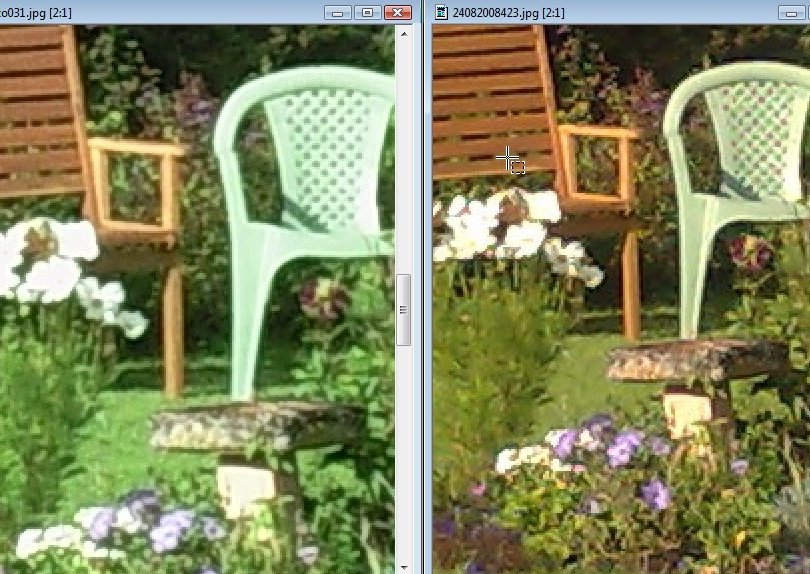 The same story again. The N95 8GB's photo, on the right, is too sharp BUT has better and richer colours, and arguably slightly more detail 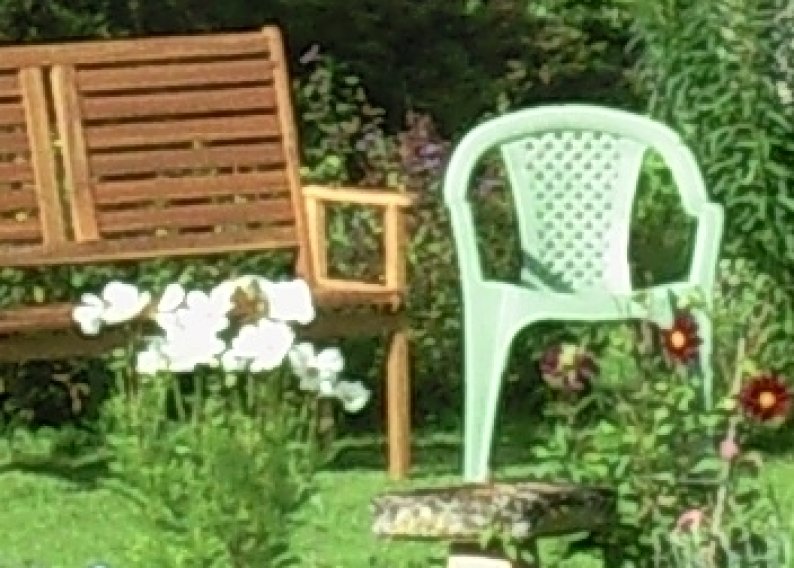 NOW we're making progress though. Above is a cropped centre from a G810 photo, BELOW is the same section, cropped from the same scene in the same conditions but with the Optical zoom set to 3x. A dramatic improvement, let down slightly, again just by the washed out detail in bright spots and by the generally weak colours 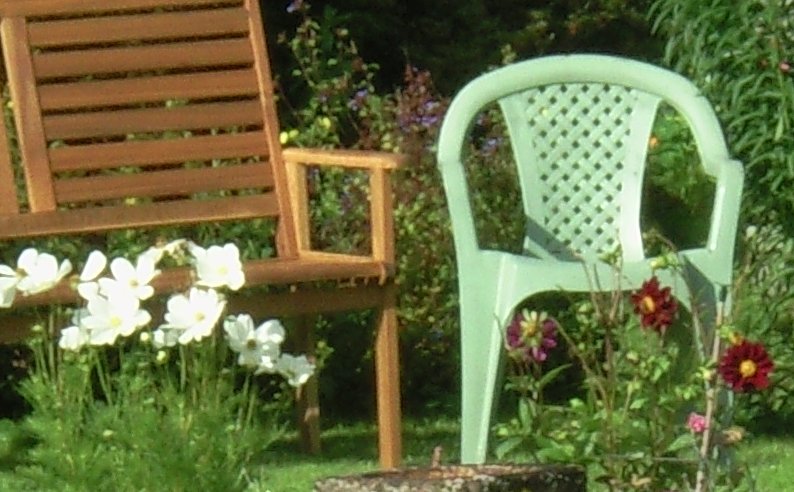 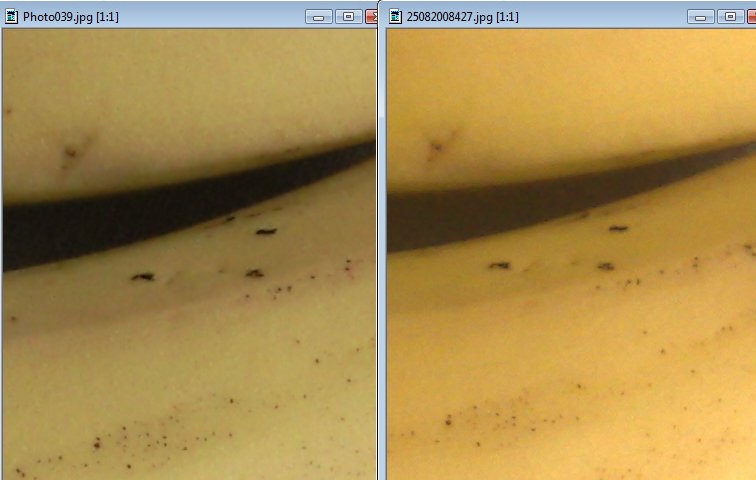 Cropped 1:1 close-ups from an indoor fruit shot. Again, the G810 is on the left, the N95 8GB on the right. No problems with detail but the colours are just - disappointing

The G810's camera is certainly in the same ballpark as that on the Nokia N82 and N95, but the lens itself seems to be smaller and the sensor of slightly lower quality, resulting in photos which don't quite measure up. I wasn't happy with the washed out colours in the photos and the detail wasn't as fine. The optical zoom helped in some situations (as illustrated above) and is great to have onboard, but I'd still take one of the Nokia flagships if given the chance.

Don't forget though that I'm being picky and that it's all relative – I'm comparing the Samsung G810 here to the very cream of the smartphone world – the G810 is certainly going to be more than good enough for anyone wanting 'a good camera phone'.

The Xenon flash was felt by both myself and Rafe to be a bit weak – it's still a lot brighter than an LED flash, but the N82's Xenon unit comfortably out-performed it in tests.

On the video front, capture is VGA, like the N82 and N95, but here at around only 15 fps and with slightly tinnier audio. Still, again, a cut above almost all other camera phones. Video playback was very smooth, handling 30fps VGA H.264 videos from my N95 perfectly, showing that there's some oomph under the hood. 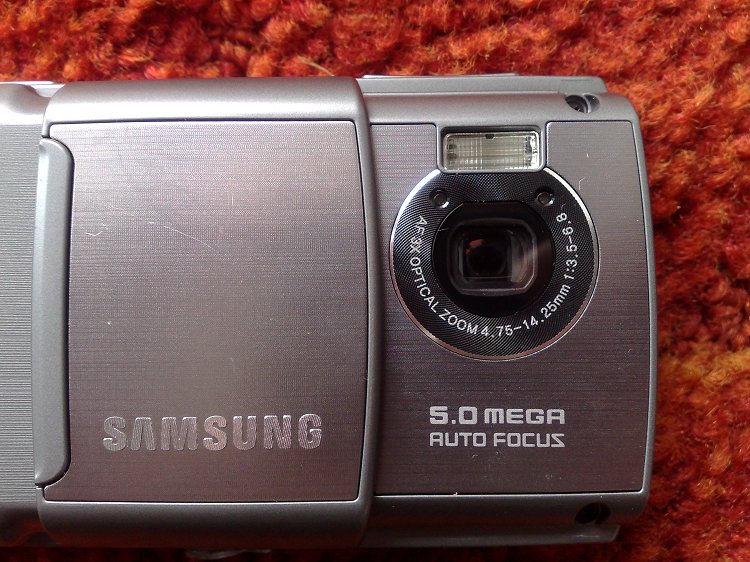 I have to disagree with Andy on the subject of screen contrast outdoors, I found the G810's display to be much more reflective than that on the N95, there's certainly more Samsung could do in this area and I'm hoping for more from the INNOV8, due here shortly.

Andy's right not to have gone through the G810's applications in detail, since virtually everything is familiar from other S60 devices and, specifically, other Samsung S60 phones, such as the i550w I reviewed recently. The only thing to note is that, as Andy mentioned, 'Search for W-LAN' is missing from the OS, a tell-tale sign in Samsung devices that the firmware isn't fully up to date – the i550w had this added to its firmware back in the spring, along with a myriad of other fixes and I'd expect the G810 to have a similar update imminently. 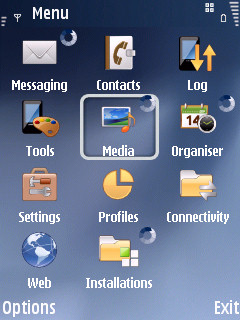 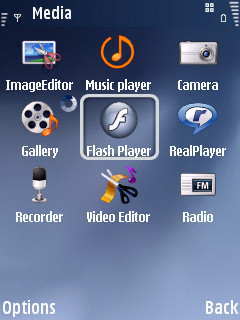 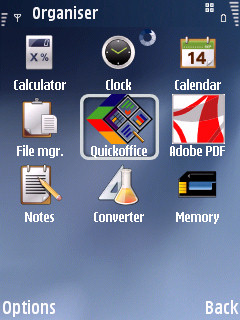 In which spirit, it's possibly churlish to mention the many other little niggles/bugettes that Andy and I noticed, most of which are going to be trivial for Samsung to sort out. The Assisted GPS utility ('XTRA') was one of the worst disappointments, being buggy to the extent of crashing the OS and needing a restart. 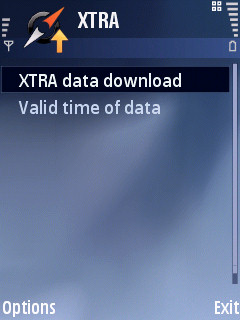 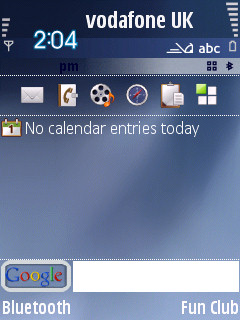 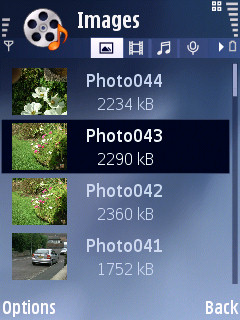 Note the XTRA (Assisted GPS) utility (broken, though), the Google plug-in on the standby screen and the 'old-fashioned' Gallery app

But regular readers of AAS will be used to this with Samsung by now – you'll need to buy with an eye on the location of your nearest service centre and then make sure you get an update around 4 to 6 months after the device was launched. And, Samsung, for the umpteenth time, if you're listening, you need to implement something like Nokia Software Update, so that customers can stay up to date without having to disrupt their lives too much.

As with other Samsung review units, the memory card containing a rebadged version of the navigation software Route 66 wasn't included, but this is a known quantity and should prove reliable.

Samsung's software bundle isn't bad (especially in light of the Arcsoft Media editing suite), but with Nokia Maps, Podcasting, Share online, Sports Tracker, Location tagger, Mobile Search, Internet radio and Nokia Chat all restricted to Nokia devices, you'll have to be quite creative to make up some of the slack on the G810. Google Maps and the web versions of the Flickr/Ovi web sites are a good start. Java applications such as Google Mail also worked well here.

There's a lot to like on the Samsung G810. It's tremendously solid, the optical zoom works brilliantly, there's oodles of RAM and flash storage, and having both Wi-Fi and GPS on board means that you're good to go for almost any use. However, the lacklustre screen contrast (double check), the slightly disappointing camera performance and the fact that Nokia's S60 applications aren't compatible, plus the inevitable early firmware bugs and small omissions mean that the G810 can't yet quite displace the Nokia N95 8GB as the S60 flagship.

Steve Litchfield, All About Symbian, 27 August 2008