A quick look at the Nokia 5800 XpressMusic's interface

A quick look at the Nokia 5800 XpressMusic's interface

The Nokia 5800 is technically a Symbian S60 5th Edition smartphone, which is sometimes called S60v5. The 5800's interface is based around a touchscreen, but it also has three buttons at the bottom of the phone.

A lot of the elements in S60v5 are taken from previous versions of S60, but there's a lot of new stuff too.

Here's a brief guide to the main elements of the S60 5th Edition interface as found on the Nokia 5800:

The 5800's functions are almost entirely controlled through the touchscreen, but there are a few physical buttons too:

Green Button - This is usually used to answer calls, or to start a phone call after you've entered a number or selected a contact. If you're on the main standby screen you can see a list of recently-dialled numbers by pressing the green button. It can also send a text message when you've finished writing it.

Red Button - This is a very useful button, it stops whatever you're currently doing. For example if you're in a call, pressing red will end the call, and it also works for applications: pressing the red button will stop the current application and take you back to the phone's standby screen.

White Menu Button - If you're on the standby screen, this takes you to the menu screen, and if you're on the menu screen it takes you back to the standby screen. You can also hold it down to see the task switcher menu, which lets you select any application that's currently running. See the "Task Switcher" section below for more details on this. (For those of you who have used previous S60 phone models, the 5800's white menu button does exactly the same thing as the traditional swirly menu key.)

Camera Button - This activates the camera application when you press it, and takes a picture when the camera app is running. Note that the button is analogue, which means it can tell how far in you've pressed it. Press it in part of the way to start focusing on an object, then press it in all the way to take the actual picture (you'll see the viewfinder grid turn green and hear a bleep when the camera is focused).

Media Button - This button is completely flat, and pressing it displays a set of icon shortcuts to the main media functions of the phone: Music Player, Gallery, Photo & Video Sharing, Video Centre and Web Browser. Like the green button you don't actually need to use this much, it's usually easier just to press the on-screen controls.

The Standby Screen (aka Home Screen, aka Front Page)

This is the main screen that's shown by default when the phone is switched on. There are a lot of functions that can be accessed directly from this screen, for example clicking on the clock opens the clock application.

Useful Tip: You can always get back to a Nokia phone's standby screen by pressing the red button. 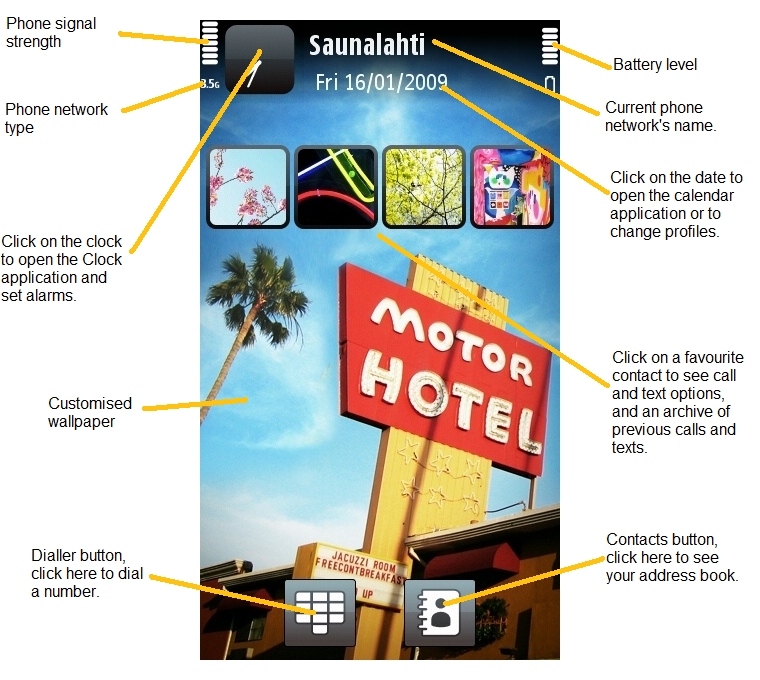 The menu screen can be accessed by briefly pressing the phone's white menu button. This is where you can find all of the phone's applications and functions. The icons either launch an application, or take you to a folder with more icons in it.

The two buttons at the bottom of the screen have labels which display what they do in a particular context. The left button normally displays the options menu for the current application or confirms an action. The right button normally exits or hides an app, goes back to the previous page, or cancels an action.

Circles next to an application's icon indicate that it is running in the background, while circles next to folder icons indicate that there is an active application within that folder. The point of circles is to remind you that an app is active, so you can close it down if you want to save battery life or speed up the phone. You can also see a complete list of active apps by using the task switcher, which is discussed in the section below. 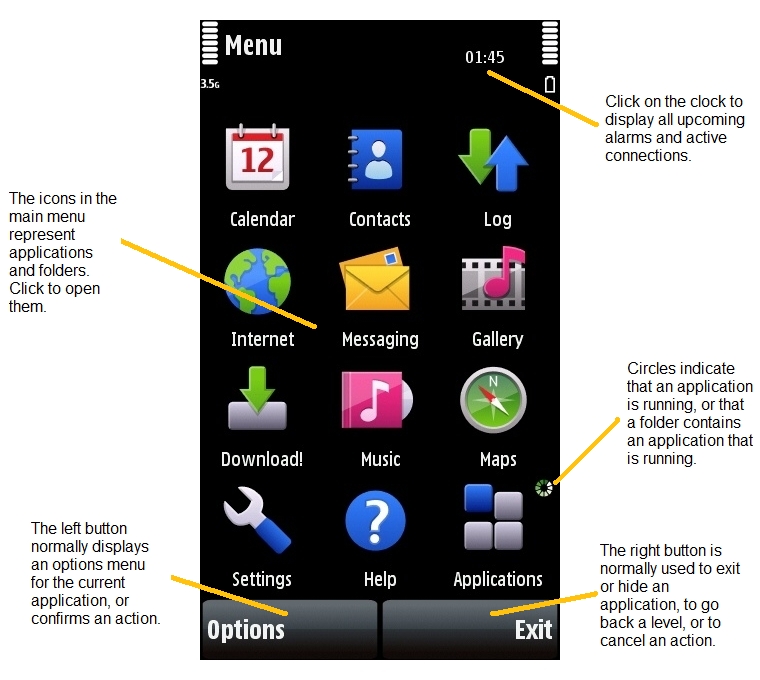 The 5800 is a multitasking smartphone, which means it can run many applications at once. You can switch between applications that are running by using the task switcher, which can be accessed by holding down the phone's white menu button. 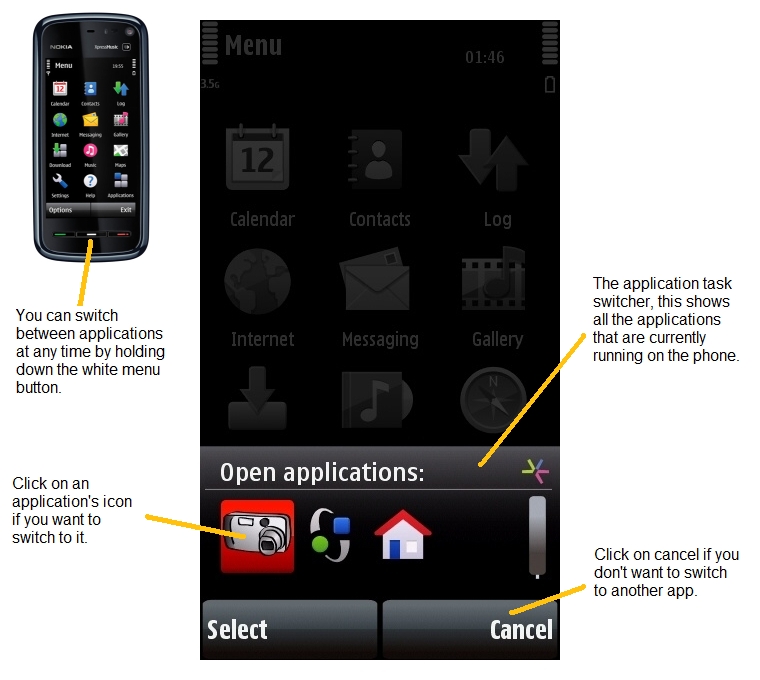 The 5800 offers a choice of methods for writing, you can find out about all of them in detail in our dedicated tutorial:

How to enter text on the Nokia 5800 XpressMusic

These methods are used by all applications on the 5800, and you can switch between them whenever you want.