A New UI is not needed for Symbian ^3, just make the existing one work

With Nokia and Symbian on the ropes in the tech media at the moment, and with User Interfaces (UIs) a particular battling point, Ewan points out that there's nothing fundamentally wrong with Symbian^3's UI and that every mobile device in the last 20 years hasn't looked appreciably different. The key, he explains is in consistency and user experience within the UI and he points out that this is where recent S60 versions have fallen down. Nokia job advert: "Wanted: Someone with obsessive attention to detail"...

In all the talk of updates to operating systems, changes to code and reworked smartphones, the biggest clamour seems to be that Symbian “needs a new user interface!” I suspect that the majority of people reading this will be nodding their heads at this point.

Let me challenge that notion for a moment, because I've been looking back at various UI's on handheld devices over the years, and you know what? They all pretty much use the same UI paradigm, they all basically work the same way, so what's the fuss about?

To be fair, there are differences. The screen sizes have increased, there are more colours available, keyboards and cursors have been joined by various types of touch screens, but fundamentally they look and work in the same way. Applications are represented by icons, and these are laid out in a grid format on the screen. Popular applications are placed in a tray at the bottom of the display (or in older machines like the Palms and Newton) hard-coded in buttons or strips made by the manufacturers. 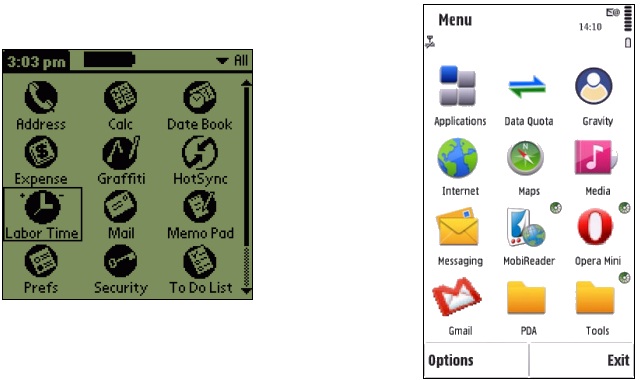 The Pilot 1000 launcher next to the S60 launcher

I'd wager that if you handed one of those older machines to a modern smartphone user, they'd be doing all the regular operations intuitively without worrying about what to do in a very short amount of time. By the same rationale (assuming we had a time machine) if you were to hand a modern device back to the PDA crowd in 1996 (apart from them wondering about the physics of the battery life and screen technology) they'd be just at home with the modern layouts as their historical counterparts. 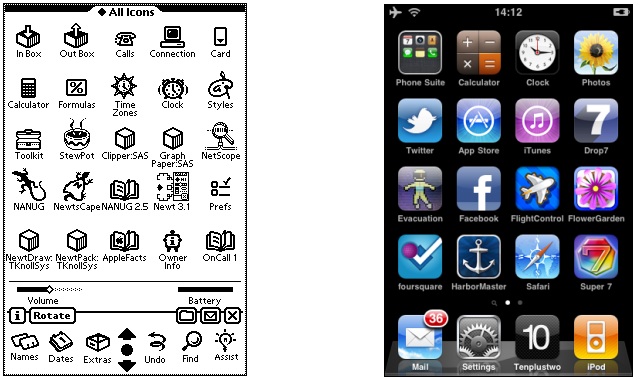 Apple's revolutionary new UI on the Newton, and the same look 15 years later on iOS 4

Getting to the app which has the information you want is key in a mobile device – then and now. While the underlying nature of any computer system is the files and directories, it's very unusual to see a file system on display as the main interface on a consumer device. Although this was the model used on the Psion machines (and to a certain extent Windows Mobile) even those machines had app launchers that could be called up and used the “icon with a name under it” view, and the mainstream machines that had the huge sales and adoption all followed an “app launcher interface”.

Mind you, the UI is not just the program launcher, it's also the buttons, menus, status bars and other on-screen elements, and these have stayed relatively consistent over platforms as well. The main menu sometimes appears as a strip along the top, but in all cases needs an operation to bring it up completely, be it a softkey press, a button marked menu, or a tap on an icon. Dialog boxes now take up the majority of the screen and are commonly 'flat' in that the options are listed sequentially and you can scroll down to alter what is required – a tabbed approach is used when more than one 'page' is needed.

The reason why the UI on the majority of mobile devices has been similar for decades, beyond little flourishes like transparency, scroll speeds and little animations and bounces, is simple. It works.

Over the last few years I don't see the mobile UI paradigm having changed. It's been implemented on a number of platforms from the same starting point – the user – and always ended up in roughly the same place. All the talk of throwing out the UI and starting again is misplaced. What is needed is a consistent UI that does what everyone expects it to do.

This is where the Symbian world has fundamentally fallen down. In its previous incarnations under EPOC (running on hardware from Psion, Diamond, Ericsson, Oregon Scientific and Geofox), there was a laser-like focus on keeping all the elements of the UI exactly the same in every built in application, and this was carried over and upheld by the third party developers. With everything under one roof (hardware, core software packages and the OS) this was relatively simple. [sounds like Apple today! - Ed]

Once Symbian was spun out from Psion, it started by promoting four different UI's that could be placed on hardware running Symbian OS. Some of these never saw the light of day, one was adapted to UIQ, one to Series 80 (the Nokia Communicators), one to 'Series 60' (S60), and manufacturers further tweaked away anything they liked. The UI similarity across Symbian OS had been lost, and I'd argue it's never come back.

Icons fill the screen, with status indications and soft keys - S80 is just as familiar

Even with the dominance of S60 to the point that S60 and Symbian have in some journalists minds become interchangeable, the differences between the UI on devices means you can't simply switch from one handset to another. The touch interface is different between various firmwares (even when the latest handsets are on the most recent firmware); applications are provided for one set of phones in the range but not another; and I'd even argue that the Nokia practice of moving application icons, settings and options around the system screens depending on the target user of the device diminishes the effectiveness of S60 as a platform (but I realise this is the very thin edge of a digital wedge).

These changes have led to S60 struggling. Not because it is a UI with history, but because those in charge of it have not kept a strict control of what is happening over the device portfolio. Where is the internal champion for S60, the cheerleader who believes that his entire purpose is keeping the UI slim and efficient?

When I hear talk about Symbian needing a new UI, I think that's wrong. What I think is more vital is that Symbian needs a consistent UI. It needs the laser focus to make every application they supply act in the same way. That doesn't restrict what you can and can't do, it's still possible to have a sprawling email application, competent web browser, agenda, world clock or solitaire card games – that's been shown on countless platforms before (and since). What it means is you need to have someone who's entire job is to look at the interface, to have the power to force changes on coders, and who is anal to the point of moving dialog boxes one pixel to the left. Because consistency in the look has to be maintained.

There's also going to be pain. Let's assume that the UI in Symbian^3 has had this microscopic surgery to get consistency across the board. Is it going to look any different to the average reviewer? Probably not – Nokia have already been using the UI in applications such as Nokia Beta Labs Gig Finder, and third parties such as the Tesco Online Ordering application (still in private development at this point in time) are using the ^3 look. I can already see the blog posts and 'expert' comments that will be written about Symbian^3's UI and discounting it because it looks the same as S60 5th Edition and therefore the handsets are sporting something that's old and 'past it'.

Err, see the argument above. Short of a few new colours and some coding to allow for a capacitive screen as opposed to a resistive screen or a key-based cursor selection model, the interface works in exactly the same way as the original Apple Newtons, Palm Pilots and HP 200LX's. It's far easier to write that "the UI is the same old same old" without explaining why this has to be the case because of user expectations.

Neither will there be acres written about how a consistent feel has been brought to the UI. One of the biggest bug bears of S60 5th Edition is that some things need one tap, some things need two (one to select, one to act), and different menus and lists work in slightly different ways. Interface is more than the look, it is the feel as well. The same accuracy that needs to be handed to the on-screen elements also needs to be applied to how the users communicate with the devices. Symbian^3 is moving to have 'one-tap' everywhere in the UI, but it's likely to go unnoticed as an improvment.

And all of this needs to be explained in a simple one page document, that is easily and freely available to every single developer, and any application that gets a promotional push in the Ovi Store, that gets highlighted by the various blogs and sites, must follow the style guide.

All the elements of a good UI are already present in Symbian^3. They're also present in the minds of the users. There is a paradigm of how a mobile device should work that's already out there. It's followed by Apple, by Google, by Palm, and others. S60 kind of followed it, but by losing the focus that other mobile platforms had, by changing icon layouts, by being inconsistent, and by burying settings and options in ever more convoluted places, S60 5th Edition felt too much like hard work, if I'm honest. 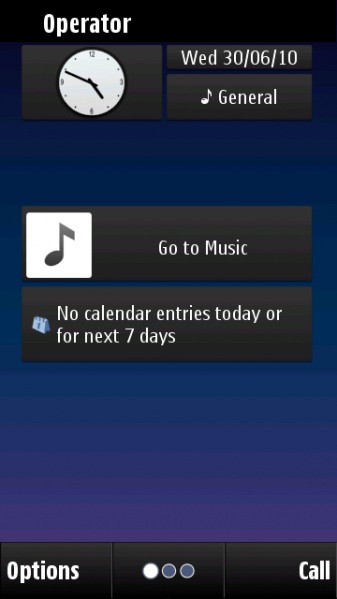 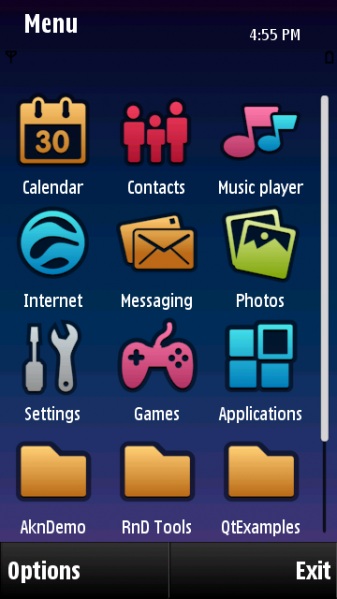 In terms of Symbian's UI, the answer is not to re-invent the wheel, the answer is to repair the punctures in the wheel so it can be re-inflated back to its proper shape. The tiny flaws in the S60 UI are magnified because they are seen in every operation. Once those are repaired, then everything will run smoothly again, and the UI will move back to something that is not noticed or commented on.

If nobody talks about the UI in Symbian^3, then it will be doing its job properly.

Filed: Home > Features > A New UI is not needed for Symbian ^3, just make the existing one work