Despite the various pros and cons for 'touch' over the years, we're firmly in a mode in the tech world now where touch makes the most sense, in terms of text input, controls and general interaction. So why haven't we seen screen sizes increase to fill most of the front area of our phones? I examine the history of the form factor, in terms of screen-to-body ratio, and wonder whether we can't have our cake and eat it, in terms of phones that are manageable yet with monster displays...

I'd like to start, as Jule Andrews once sang, "at the very beginning". In this case around the year 2000, when the first smartphones were starting to appear. I'll gloss over the Nokia Communicator line, since they were clamshell devices and once you introduce a hinge then all bets are off in terms of screen size analysis (the 2016 equivalent might be thinking about folding AMOLED screens, as rumoured in Samsung's line-ups).

So, with a deep breath, and with a few notes and caveats: 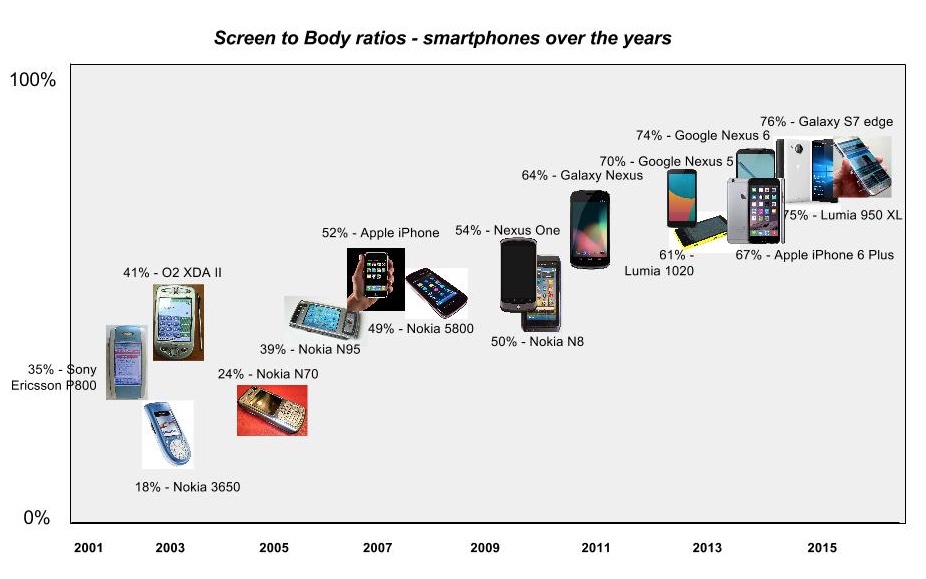 An obvious trend upwards, as you'd expect, as technology became ever smaller in terms of chipsets and components, while the cost of larger and higher resolution screens came down. There are some surprises along the way - who'd have thought that the screen-to-body ratio of the first smartphones was so low? 18% for the venerable Nokia 3650 (though its curved front rather messes up my rectangle-based maths, so take this with a pinch of salt)! At least the Sony Ericsson P800 and the Windows Mobile range led the way, with larger screens and relatively smaller bezels - though look at any of those early smartphones side on and you'd be AMAZED how thick they are. In 2016, if a phone is over 1cm thick it's pronounced as a 'brick' - smartphones in the early 2000s were regularly well over 2cm thick!

The introduction of the iPhone in 2007 broke the 50% mark for the first time and clearly started something of a trend. Capacitive screens and who cares about the cost, etc... However, the cost came down quickly and the iPhone range got overtaken by first the flagships in the Android world: the Galaxy Nexus, Nexus 5, and Nexus 6 all spring to mind in terms of large screens and small bezels for their era. And secondly, every other mobile OS/variant, of which Windows 10 Mobile is probably the most notable, with the Lumia 950 XL having an insanely high ratio, bettered only by the (cheating slightly) Galaxy 'edge' series.

But what's curious is how the trend has flattened out at about the 75% mark. Now, given my assumptions above, not least about a device having 90° corners - which would be very uncomfortable (though the Lumia 1520 had a good try at this), plus the compulsory earpiece speaker and top-of-phone sensors, it's evident that getting close to 100%, i.e. all-screen, is never going to be possible. But why can't it get close to 90%?

The old excuses were that there had to be space for physical controls down the bottom, and that you had to have somewhere to grip the phone 'down there'. But I don't buy these excuses anymore - the Windows controls are all virtual, while I can't see anyone ever gripping their 'phablet' using the bottom centimetre of glass below the display - modern phones are all so big these days that it's about cradling them with fingers, whether in two-handed or one-handed mode.

Let's take the popular (ok, among Windows 10 Mobile enthusiasts, at least) Lumia 950 XL, as just mentioned. We have a world beating 5.7" screen, part of which is taken up by virtual Windows controls, though it's still a large display. But it could be larger. There's a good centimetre at the bottom of the glass that's not used for anything, plus a similar centimetre at the top (and below the earpiece and sensors). With modern motherboards and chipsets being so tiny and with modern displays (especially AMOLED, which don't need backlights) being so thin, why can't we have a device that's almost all screen?

I calculate that a 6.3" screen could be used in a phone with the plan form factor of the Lumia 950 XL, with no issues. It just needs a manufacturer to get past the psychological hurdle that 'people want to hold the bottoms of their phones'. They don't. Not these days. People haven't held phones by their bottoms since the days of QWERTY and T9, and that was half a decade ago.

We've seen 'bezel-less' designs coming out of Asia, not least those from Sharp, with buzzwords like 'Infinity Display', but they only usually refer to the side bezels (and even there they're cheating, in the style of those 'edge' designs from Samsung). Look, we all love seeing Netflix, YouTube, captured photos and videos, gaming, etc. on a big phone screen. Yet we love holding something smaller.

In my case, the aim is to find a design that I can wrap my hand around, ensuring a secure grip while out and about. The Lumia 950 is perfect for this, but it only has a 5.2" screen. However, if the display was enlarged, going from the bottom edge up to beneath the sensors and earpiece, we'd have a full 6" diagonal screen in the same physical form factor. 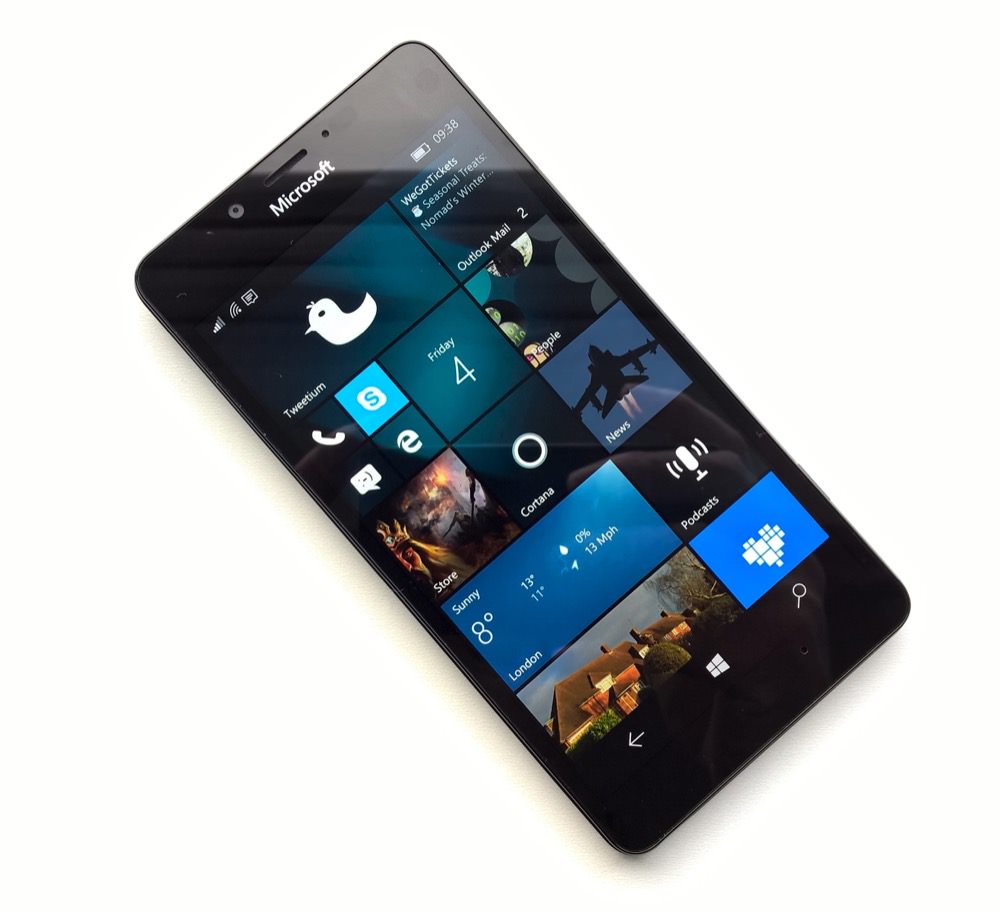 Spot the wasted space in the Lumia 950 - a full centimetre above and below the display. Anyone for a 6" screen in the same form factor? It can be done...

I've taken most of these phones apart and, while I appreciate that there are sometimes extenuating factors, in the vast majority of cases, with the 2016 display and chipset technology there really is no reason why we can't have a smartphone that's effectively 'all-screen'. There's only really a big up-side for the consumer and no downside, aside from a little more design and testing work for the manufacturer, plus the realisation that there's no room to put a logo on the front, but hey, isn't that what phone backs are for?

Let's take the hypothetical example of the Lumia 950 XL above. It already has a screen-to-body ratio of around 75%. With the 6.3" screen postulated above, and with the maths redone, the ratio becomes more like 92%. Now that's more like the theoretical maximum, the trend line that the phones in the chart above should be aspiring to.

Comments welcome - am I barking mad? Personally I think that we'll see ratios of 80%+ within six months and we might even get near that 90% mark by the end of 2017. It's how the phones/pads/communicators of the future will look, you know....

PS. I'm sure someone's going to point out that touchscreens are tricky enough as it is when passing the phone to someone else (e.g. a parent, to look at) - they always seem to touch something they shouldn't. However, the extension of the displays suggested here will make very little difference - it's not as if you hand over your precious smartphone by holding it using the bottom centimetre these days - instead you cradle it and brace it on its edges, as needed.