Ten common objections to using Symbian - and my answers!

It's all very well trying to defend your choice of a Symbian-powered handset to your friends and family in 2013 - and I'm sure you have your own arguments. But, in case you'd like a URL to point them to as well, here are the top 10 common objections to using Symbian - and my answers! This is no rah-rah fanboy piece, note - I've tried to be competely honest in my appraisal, as you'll see from the conclusion...

Symbian-bashing, a minority geek sport in 2010, hit the mainstream in early 2011 when Stephen Elop announced the platform's end of life and a new direction for the company's smartphones. Before Feburary 2011, Symbian had its detractors, but the sheer sales numbers somewhat blunted the criticism. After the announcement, griping about Symbian's faults became a whole lot more acceptable, backed up by falling sales across the world ("See, we were right", "Even Nokia doesn't believe in it anymore", etc), all of which was somewhat distasteful to me and reeked of throwing the baby out with the bathwater...

Symbian can be defended, even two years later, in 2013. In no particular order, here are the top 10 criticisms levelled at the OS:

Granted, 640 x 360 pixels is low compared to the 2012/2013 flagships on Android, many running at 1280 by 720 pixels. On the 3.5" screened Nokia N8, C7, 701 and other devices, the resolution is well over 200 pixels per inch (ppi), and with full RGB layout (many of the Android competition devices use pentile layout, arguably halving the resolution - I still maintain that the display will appear very crisp to just about anyone.

The 4" screened E7, X7 and 808 PureView work out to about 183ppi and I'll agree that text can look a little pixellated, though you really don't notice an issue when viewing photos or videos on the RGB screens.

Although it would be nice to see a modern Symbian touchscreen device with higher resolution display, all such plans almost certainly got shelved when Stephen Elop scaled down future Symbian development. So, for better or worse, we're 'stuck' with nHD - it's not an issue for me, but what about you? 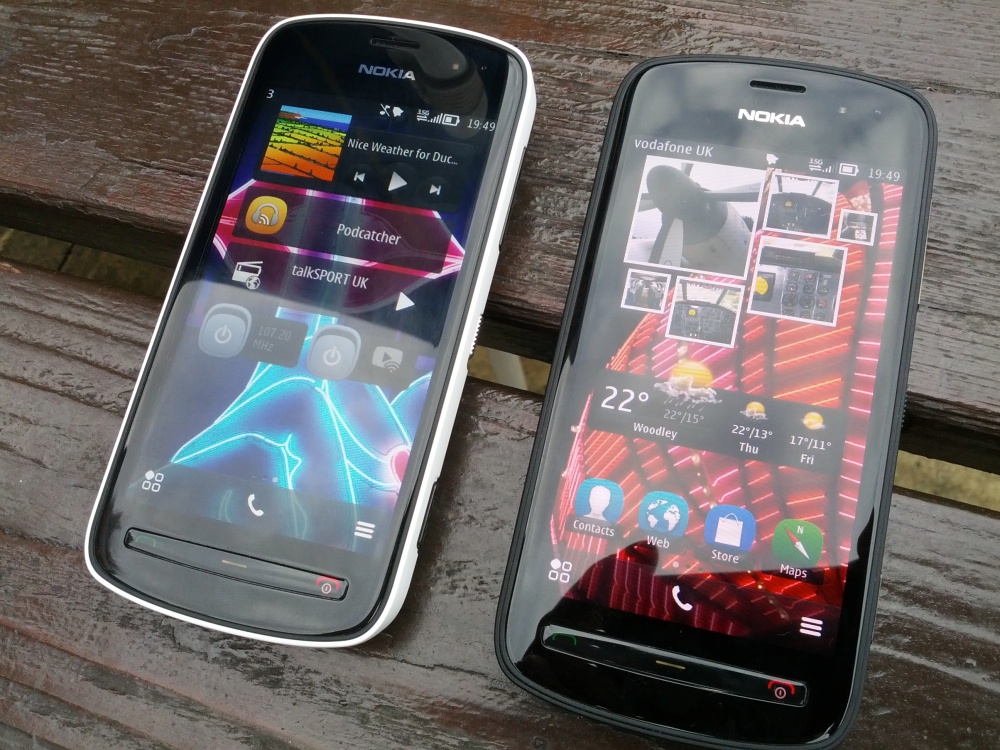 Two 808s for the price of one?(!) Most onlookers are actually quite impressed by the screen quality and clarity - this shot was taken outdoors in bright light...

2. "The screens are too small"

This is more a criticism of the way Symbian device development was effectively halted in its tracks mid 2011. Only the 808 PureView survived the cull and that's because its unique camera could only be mounted on a Symbian device. In comparison, throughout the rest of 2011 and through 2012 we've seen flagship smartphones on Android and Windows Phone keep rising, with 4.8"-screened phones now commonplace.

Of course, it remains to be seen whether this trend will continue - I maintain that a 4.8" screen is too large for the mainstream and that the sweet spot is around the size of the Nokia 808/Motorola RAZR M/i/Nexus S, with perhaps a 4.3" screen squeezed in. That's about perfect for users away from the geek cutting edge.

Symbian's nHD was at first designed for 3.2" screens (the Nokia 5800) and then enlarged slightly to 3.5" for the new wave (N8 etc.) and the OS sits most happily at this screen size. And if a user really, really wants a screen larger than 4" for some reason then perhaps another OS really is the way to go.

Symbian Web really isn't. At least, it's a competent piece of code by 2010 standards and based on the same core code as most browsers on other platforms. The issues are two-fold, though: firstly that browsers such as Chrome on Android have had so much R&D love lavished on them that they're now massively more optimised than Web. And secondly, as I've said before, that the dramatic increase in bloat in web pages (mainly javascript) has meant that coping with web browsing is akin to hitting a moving target. And with Web having slowed to a crawl these days, the rest of the mobile world has been sprinting ahead.

One of the first things I do on a Symbian phone is install Opera Mobile and Opera Mini - the former for general browsing on Wi-fi and the latter for browsing when bandwidth is something scarce. Both highly recommended.

It's not. Take out the web browser factor (see 4. above), overlook the Web-based Social system and Symbian's interface generally flies, with instant switching to running applications and fluid homescreen and app menu scrolling/swiping. Only the fastest Android phones and Windows Phone devices have a faster general interface.

Social is an issue, too, of course, since it's likely to be something that new users gravitate to. Of course, with few new Symbian phones being sold now (see 8. below), it's likely that most Symbian users will have discovered one of the many fast and slick Twitter and Facebook clients and will be using those rather than Nokia Social, in which case the problem is solved.

5. "There are no apps or games - where's Instagram, for example?"

I've looked at the Symbian application scene several times, even creating my own curated directory of the best applications, and I'd argue that the number of high profile omissions is actually quite small. Instagram is one such (though not one I've ever wanted on Symbian), Google+ is another (I've had to rely on the mobile web version), but most mainstream smartphone functions are covered.

(From the Curated Symbian App Store)

The problem is that as new services come along, they're unlikely to be covered by a native Symbian client, since the pace of development has slowed down massively, so the 'app gap' is only going to widen as time goes on.

Complaints about lack of games are justified - there are a handful (maybe 30) of really polished 'HD' games for Symbian in the Nokia Store, plus a mountain (thousands) of 'casual' games, but nothing like the many hundreds, if not thousands of polished efforts for iOS, for example. But then if you're a hardcore gamer you've probably moved onto iOS or perhaps Android by now already....

Well, yes, but then so are Paul McCartney and Mick Jagger and they still rock with the best of them...! I'll grant you that 'old' in the mobile world does have the disadvantage that it'll have been designed, at its core, for a very different world than that of 2013 and its needs. But complaining that Symbian is 'old' is more than a little bigoted.

Yes it is. Buy a Symbian phone right now and Nokia will answer questions on it, fix hardware issues and generally support you for at least another two years, i.e. through the full warranty period.

Admittedly, if you're seeing the word 'support' and thinking 'rolling programme of continuing major updates for free' then you'll be disappointed. We've seen the last feature updates for all Symbian phones now, future updates will be all about minor bug fixes and compatibility patches. But this isn't the definition of 'support'.

8. "You can't buy a Symbian phone in the shops anymore"

In High Street shops, this is now largely true, sadly - Nokia stopped pushing Symbian phones through the channel about a year ago. But a great many online web 'shops' still stock Symbian hardware (Amazon is always a good place to start) and often at bargain prices. So, once you know which device you want, finding it available for sale is almost always not an issue at all.

Well, I can't advise on what's cool and what's not. Ask someone in Silicon Valley and they'll view Symbian as a dinosaur. Ask someone in Finland or Holland and they'll think wistfully of some of the champion Symbian-powered devices they've had over the years. And brandish a Symbian-powered phone in a few year's time and it'll be 'retro', and thus pretty cool by definition(!) 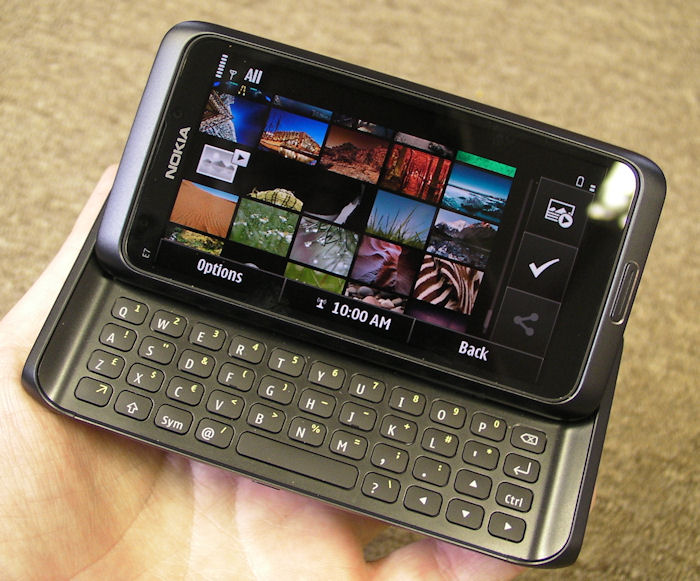 The Nokia E7 - heck, never mind its flaws, this thing is already retro and already cool - try opening it in a room of iPhone and Android fans.... 8-)

Not true. At least, it wasn't true from 2000 to 2012. Everything from top phone cameras to GPS integration to FM transmitters to USB on the go to TV out all started with Symbian-powered hardware. Plus the OS had full multitasking back in 1993 (under the name SIBO), thus predating the iPhone (which still didn't have multitasking) by 14 years. I know, I'm stretching a point here, but I wanted to make it anyway.

Although I've been able to defend Symbian's position (hopefully) fairly eloquently, the very fact that an article of this type is needed shows that there's a problem. In fact, for each point, there's an element of truth in the criticism, despite my defense.

I suspect I could write similar lists (with different points) for the other mobile OS, mind you - though as newer operating systems on more recent hardware, the lists for iOS, Android and Windows Phone might not each make it to '10'.....

Still, when a contact of yours moans about Symbian and pulls an ugly face, at least you've got this URL to point them towards or to refer to!