I've tried to like Nokia Social over the last 12 months, I really have. And in attempting to document how to use it effectively in the light of other, more capable, contact-social schemes like in Windows Phone Mango, I keep coming up against limitations and annoyances which should really have been addressed by now. At the risk of stating the obvious, here's Social's limited take on contact integration, my constructive comments, and five other things that should definitely be on the Nokia Social team's to-do list.

Social networking is a complete after thought on Symbian, of course. When Symbian (/S60) was being developed, there was no such thing as a social network. During S60 5th Edition days, it was left to independent developers to introduce Symbian smartphone owners to the concept of connecting with social communities and sharing status and media. When Symbian^3 came along, Nokia introduced its take on the idea - Nokia Social networking - or just 'Nokia Social' for short.

Built on Web Runtime (i.e. the whole experience is effectively built around HTML, javascript and CSS rendering), Nokia Social offered an extensible system of social networks (ok, it's extensible in theory - in practice, only the big two have been offered, at least in the Western world) that could be browsed and contacts 'linked' through to entries in Symbian Contacts. Which, performance implications aside (see below), seemed adequate, if not spectacular. It wasn't as if things were much better on other mobile platforms.

But gradually, others started pulling ahead. HTC were pioneers in trying to integrate Facebook and then Twitter right into the phone's contacts, in their Sense UI extensions. Not just as in linked profiles, but physically synchronising the contacts in all three sources together. In other words, recognising that "David Mansfield" on Twitter is probably the same guy as "David Mansfield" in your phone contacts and also "David Mansfield" on Facebook. So why not automatically combine them into one single integrated system? HTC got most of the way 'there' but it has mainly fallen to the newest mobile OS on the block, Windows Phone, to start with a blank sheet of paper and do 'People' right.

Having played with People on a Windows Phone (Mango) device, mind you, going back to Nokia Social feels a bit primitive. For starters, there's no syncing of Contacts with the contacts on your social networks. There's not even an 'ad-hoc' scanner to trawl through a social network and offer up a list of suggested matches. It's strictly a person-by-person manual linking affair - and it's not quick.

For example, I have Nick Robinson ('ratkat' around AAS!) in my normal Contacts on the N8. I'm in Nokia Social and I see a post from him from Twitter - tapping on his thumbnail gives a pop-up with 'Link profile to contact'. You can see where this is going, can't you? After a character search, I pick the appropriate entry from my 1000 or so contacts and the link is then in place. So that's multiple taps so far, and only one link in place for one contact on one social network. 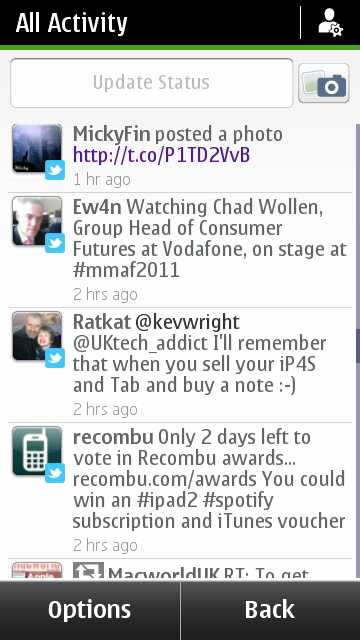 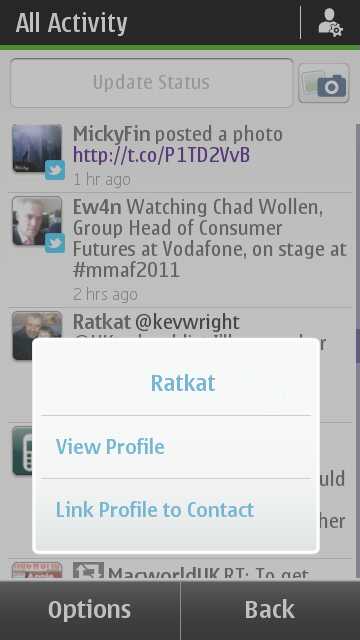 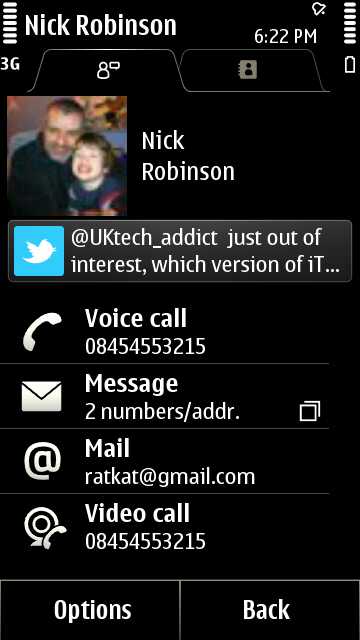 What about going the other way round, you ask? Within a contact record, in this case my wife's (for simplicity, since I know she has a Facebook profile), I can tap on the 'Social networks' banner - and I then have to sit through a Nokia Social splash screen and app restart even though I know for a fact it's alread running in RAM. A 'Friend search' is instigated across my social networks and a match found. I tick it and then tap on 'Add selected'. In theory, this could be multiple networks, if the friend or relative is represented on more than one. Nokia Social goes off and sets up the links for you, along with grabbing the last status message from each network. This second technique is smoother and potentially more tap-efficient if you have contacts with both Facebook and Twitter profiles, but both are heavily manual, heavily time-intensive. 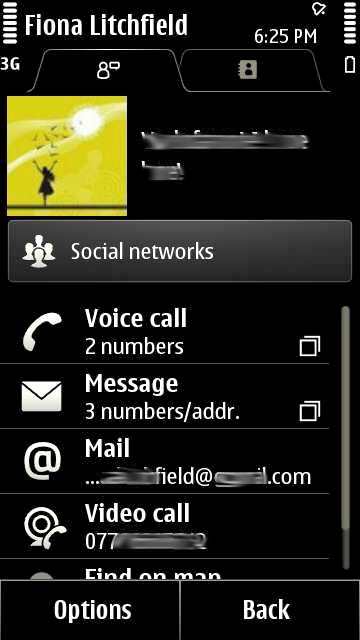 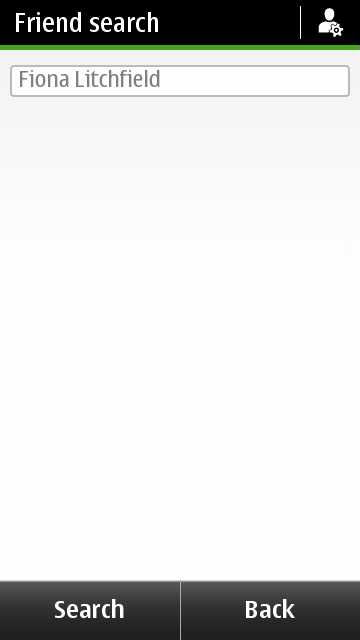 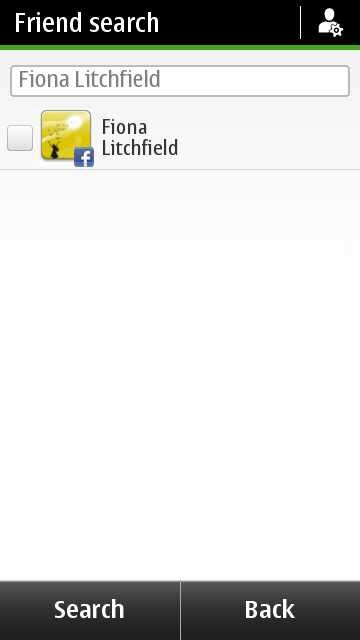 What's needed to have a chance of getting close to the People nirvana that's Windows Phone is to have - at the very least and in the absence of a continual syncing system, which is probably too much to ask at this late stage in Symbian's evolution - a 'Find social contacts' menu option in Contacts.

For instance, you'd tap this and a scan would be made of each network for each of your contacts. With the peoples' names in RAM the comparison should be relatively quick - I'd have thought around thirty seconds or so. After this, a list of matches would be shown and you'd tick the ones for whom you're happy to have links put in place and profiles grabbed.

A final tap on 'OK' and Nokia Social would spend a happy five minutes or so in the background retrieving profiles as needed. With a 'Select all' on the match list, the whole affair might only involve three or four taps of the screen - for all your contacts. 'Find social contacts' could perhaps be something you'd run every few months, to bring your links up to date. I can't see that this solution would be a huge undertaking and its absence currently means a massive amount of manual contact and update browsing and tapping.

Consider this, then, to-do item number one for the Nokia Social team. But, while I've got their attention, here are five more to-dos that urgently need attention. Comments welcome if you get as frustrated as I do by these issues.

I've ranted about this before and I'm going to keep blasting Nokia with the concept until it sees sense. Having equipped almost all of its Symbian^3 fleet with AMOLED screens, the one thing that should be avoided at all costs is prolonged display of large panels of bright/white pixels. Web is excusable, most web pages are designed around black on white, as per a printed page. But there's no excuse for Nokia Social (or indeed, for the Nokia Store client). When you're spending an hour a day browsing through social updates, comments, tweets and so on, that's an hour a day at up to fifteen times more power drain than if a dark theme was used (i.e. white text on black background). FIFTEEN.

As mentioned above, the implementation of Nokia Social in Web Runtime has certain performance implications. Or rather lack of performance. There's often a lag before a gesture is acted upon and sometimes icons have to be tapped twice. And even then the kinetic scrolling can sometimes be sluggish. It's instructive to compare the speed of the interface to that in Gravity, which is coded in native C++ for Symbian and as a result every gesture is immediate and reactive, every pixel is responsive, the kinetic scrolling fast and fluid, whatever else is going on in the background.

I suspect it's too late in Symbian's life story to rewrite Nokia Social in C++ - if Nokia had wanted to do that then it could just have licensed Gravity. But a port of the code to Qt/Qml would seem eminently practical. And, judging from the speed-up given to the new Store client, the rewrite could double the speed of the interface - which would be enough, I think.

There's a timer built into Nokia Social somewhere. It's ten or fifteen minutes, I think. I don't know for sure because I've always been too impatient to time it! At the moment, if you want to refresh your updates, you have to tap on 'Options' and then 'Refresh'. It's only two taps, but they're galling because you have to do this many times a day and you should only have to achieve this with one tap. Either on a 'Refresh' icon or by the now standard technique of 'pulling down' from the top of the update stream/banner.

Again, it's not rocket science and it would make Nokia Social seem more current and faster to use.

Scroll down a few dozen tweets or updates and you'll hit a 'View more' banner, which has to be tapped and a wait incurred before you see another dozen. And so on, up to a limit of about 50. My first question is - if the app can display 50 in the first place, why are only a fraction of this loaded - maybe it's another speed issue? More importantly though, given that tweets and Facebook updates are mainly plain text with only tiny thumbnail images, why on earth is there such a low 'hard' limit on what can be displayed? This is 2011 and our smartphones have hundreds of Megabytes of RAM. So why is Nokia Social behaving like it's only got 100kb to play with?

With a handy little magnifying glass icon in the Twitter module, you'd have thought it perfect for querying Twitter's API and getting back results, perhaps even reporting on trending topics. In fact, you can do all this - but it's all farmed out to an instance of the Twitter mobile web site, ruining the 'social client' immersive experience. And you've effectively gone from a clumsy Web Runtime-based UI to a clumsier totally Web-based UI.

Other Twitter clients seem to be able to perform searches on Twitter without issue, so why can't Nokia Social?

So Nokia (and, possibly, Accenture) - I know you guys read All About Symbian, so how about some comment on these issues and what's being done to address them? It would be a real shame to see Nokia Social stuck in its current state for the rest of Symbian's life....