Navteq were present at Nokia World 2010, with one of their GeoData collection cars taking centre stage. They were also showing a promotional video of their LIDAR based 3D data collection system. Also on display was the first showing of a mobile client to actually make use of Navteq's 3D street maps, running on the Maemo-powered Nokia N900. Read on for more details and a demonstration video.

Readers of All About Symbian will recall Rafe's report from MWC 2010 on Navteq's "True" project. Anyone who has used Google Street View will be familiar with the aim of Navteq True. However, rather than switching between discrete locations from which to view panoramic photos, the continuous 3D mapping provided by NavTeq will allow users to smoothly move to any point in the virtual environment.

Thanks to the precision of LIDAR (Light Dection and Ranging), Navteq are able to capture 3D images of the environment (accurate to 1cm), even providing data like road width and height of vertical obstructions, such as bridges. Add in photo data to this, and Navteq will even be able to provide metadata based on shop fronts and street signs. 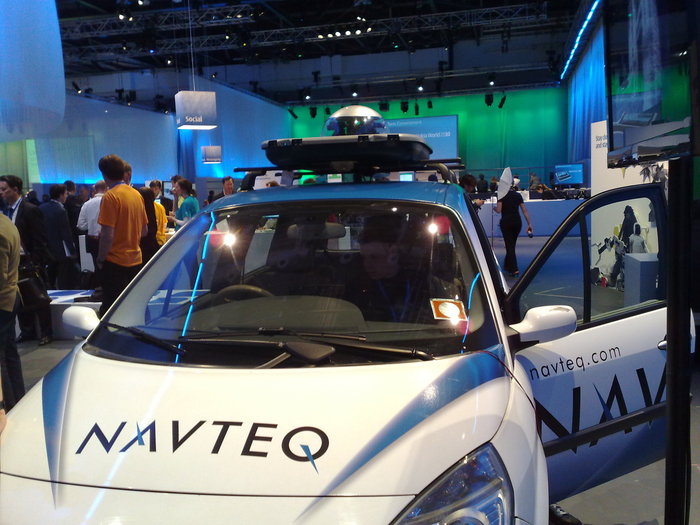 One of NavTeq's GeoData collection vehicles

I spoke to Nokia's Ville-Veikko Mattila (a senior manager at Nokia's Mixed Reality Solutions department) at Nokia World 2010. He explained to me that even though the Navteq GeoData collection cars have eight roof-mounted cameras, this visual data had not yet been included in the same data used by Ovi Maps (i.e. to produce a Google Street Map clone). Rather, Navteq have used this visual data to perform internal validation of their 2D mapping data. However, as areas are mapped by the new LIDAR system, the 3D models will be skinned with photographs, providing a realistic virtual environment.

Part of the demonstration run by Mattila was to show a work-in-progress client which displayed a 3D-mapped environment, running on an N900 (Maemo). He explained that the client was built on Qt, and therefore will run on Symbian^3, Maemo and MeeGo; there was no mention of a Symbian^1 back-port though.

He went on to explain to me that they wish to build in social features so that users can send map points to each other. When I asked if sharing map points would include sharing a specific direction in which to look within the virtual environment, he explained that this was not yet implemented, but was certainly possible within the framework they've built. He also mentioned that they're currently working out how to share above-ground-level view points of buildings, a Spider-Man point of view, if you like :-)

Having seen the client run on an N900, I was impressed by how smoothly the data was rendered and scrolled through. Unfortunately, there was no news of when this would become an official product. No doubt it is coming, but it's still a work in progress.

David Gilson for All About Symbian, 28th September 2010