On the official Nokia Conversations YouTube Channel there's a promotional video [update: temporarily withdrawn] for the presumably imminent Nokia E72. The device is a follow up to the popular Nokia E71, it shares the same form factor and basic design. However it has an updated keyboard with a redesigned control cluster area and redesigned layout for the bottom row of the QWERTY. There is also a 5 megapixel camera (up from 3.2 megapixels) and it runs an updated version of S60 (S60 3rd Edition Feature Pack 2) with the latest version of Nokia's messaging and email software. We're expecting an official announcement shortly and will post more details at that time (update: now officially announced). 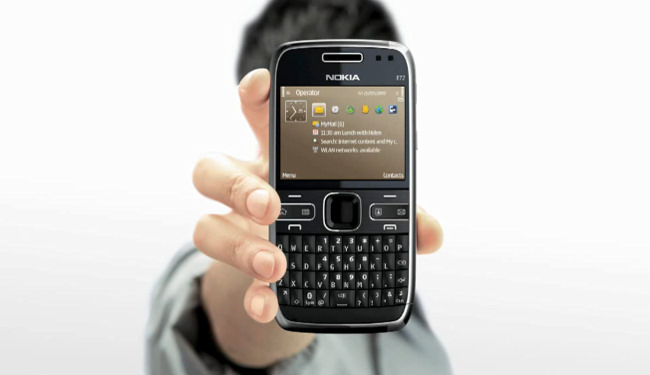 From the video, as you would expect, it is apparent that the focus of the device is Messaging. It uses the same software as the Nokia E75, which sees full integration of email from multiple solutions (GMail, Yahoo, Microsoft Exchange, Lotus Notes etc.) into the Messaging application with an updated email client (as seen in Nokia Messaging on other devices). Ovi Chat, Nokia's instant messaging solution (with location support) is also available as part of the messaging suite of software.

A quick glimpse of the back of the device shows there's a 5 megapixel camera on board. The QWERTY keyboard has been tweaked with a redesigned layout on the bottom line (compared to the E71). With a smaller space bar there is room for two extra keys and the torch functionality (first seen in the E63) has also been added.

Update: the video has now been temporarily removed.